Cowpea (Vigna unguiculata L. Walp.) is an important cash, food and nutritional security grain legume crop in the semi-arid regions of sub-Saharan Africa. However, its productivity is hampered by several biotic stress factors including numerous insect pests that infest and damage the crop at all its development stages in the field as well as during storage. This study sought to identify new sources of resistance to cowpea aphids. Ten lines were infested with three strains of aphids and their resistance was evaluated. Results revealed that among the cowpea genotypes, line IT97K-556-6 was found to be the most resistant to all the three strains of aphids. Line N ° 2300 was the most susceptible to all the three strains of aphids. KN-1 considered as a susceptible control was found to be resistant. Prior to lines classification based on their resistance to aphids, the analysis of the Area Under the Infestation Progress Curve (AUIPC) showed that IT97K-556-6 has exhibited the higher level of antibiosis. It was the least favorable to the development of aphids and NS-1 was the most favorable. Promising lines have been identified for further evaluation and utilization for improvement in cowpea.

Cowpea, Vigna unguiculata (L) .Walp. is a proteinaceous plant with a high nutritional value. Like other legumes, awareness of its nutritional benefits, its importance in food security and sustainable agriculture, and in mitigating biodiversity loss and climate change have been promoted by the United Nations General Assembly who designated 2016 the International Year of Pulses (LPWG, 2017). It is the   most   economically   important   indigenous  African legume crop (Langyntuo et al., 2003). Cowpeas are of vital importance to the livelihood of several millions of people in West and Central Africa. Rural families that make up the larger part of the population of these regions derive from its production, food, animal feed, alongside cash income (Gómez, 2004). West Africa alone produces about 83% of the world production (Faostat, 2016). However, grain yield remains the lowest in these areas. It rarely exceeds 400 to 500 kg per hectare in the traditional production system (Langyintuo et al., 2003). High yields in cowpea are seriously militated by insect pests and without insect control, yields range between 100 and 250 kg ha-1(Oladejo et al., 2017).

The cowpea aphid, Aphis craccivora Koch (Homoptera, Aphididae) is one of the insects causing serious yield losses in cowpea. This species feeds on phloem and became a major pest of cowpea in Africa, Asia and America (Obeng-Ofori, 2007). Aphids cause damage to susceptible cultivars directly by modifying the metabolism and by extracting plant nutrients and, indirectly, by transmitting phytopathogenic viruses (Blackman and Eastop, 2000). At least 14 legume viruses are transmitted by A. craccivora (Thottapilly et al., 1990). Host plant resistance is an efficient and environmentally friendly way of controlling insects, including aphids. Some cowpea lines have been screened in Africa and different levels of resistance to aphids have been found (Kusi et al., 2010; Souleymane et al., 2013; Aliyu and Ishiyaku, 2013, Omoigui et al., 2017). Unfortunately resistance-breaking biotypes have occurred in several plant–aphid systems (Dogimont et al., 2010). So, new resistant sources need to be developed and deployed in cowpea growing areas where aphids occur in order to reduce the risk of resistance break-down. Genetic studies on aphid resistance have also been done (Bata et al., 1987; Pathak and Krishna, 1991; Huynh et al., 2015) but the results of these studies differ from one to another raised questions about the mode of inheritance to aphids. Thus, to increase the understanding of aphid resistance, it is necessary to find out more sources of resistance.

The purpose of this study was to contribute to the increase in the yield of cowpea by the identification of aphid resistant lines. The specific objectives were i) to assess differences among lines in terms of degree of aphids infestation  ii) to find out relevant parameters to be used for lines classification and iii) to classify the lines based on their level of resistance to aphids. 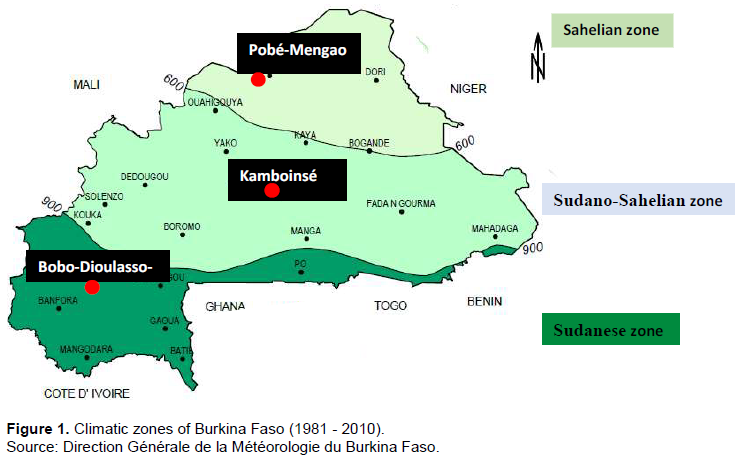 The collection of aphids took place in October 2013. The stocks of insects brought from the fields were kept in rearing cages on susceptible line KVX 396-4-5-2D. The screening test for resistance was done with the offspring of the wild-type strain. Each strain was kept in a separate cage from the others to avoid mixing the 3 strains.

The experimental design was a Randomized Complete Block Design with three (3) blocks, five (5) replications each. Plants in each block were infested with only one of the three (3) aphid strains. The screening was done inside transparent plastic buckets. Seven days seedlings were used for this screening. The infestation consisted of taking a sample of five aphids and depositing them with a brush on each plant. Plants were regularly watered by direct water supply to the foot and remained under parasitic pressure throughout the duration of the test. For this, the upper part of each bucket was covered with insect (aphids)-proof tissue held by small wooden beams. The set was hermetically tied up using elastic ribbons. The bucket bases have been provided with small holes to facilitate the evacuation of irrigation water.

The raw data of one month after infestation and data of the (Area under the Infestation Progress Curve (AUIPC) were used for analyses. Analysis of variance (ANOVA) for the area under the infestation progress curve (AUIPC) was conducted to check first, whether the difference among lines based on their ability to slow down the multiplication of aphids is significant then, whether the difference among aphids strains is significant and finally to check the existence of line-strain interaction. SAS 9.4 software was used to analyze the data. The formula used to compute the AUIPC is:

Xi = Degree of infestation at the ith observation

Xi + 1 = Degree of infestation at the (i+1)th observation

Ti = Time in days for the ith observation

The raw data of one month after infestation was summarized to get the variables (Degree of infestation, Survival rate and the number of trifoliate leaves) means for each line. Using the same raw data, correlation analysis through the principal component analysis was conducted prior to the lines classification to investigate the relationship among variables in order to select the relevant variables. These selected variables were analyzed to determine the resistant lines. XLSTAT 7.1 was used to compute the data.

Hierarchical clustering analysis with three classes was conducted to identify which line is resistant, moderately resistant or susceptible using the raw data of one month after infestation with only the most important variables selected before. XLSTAT 7.1 was also used for this analysis. 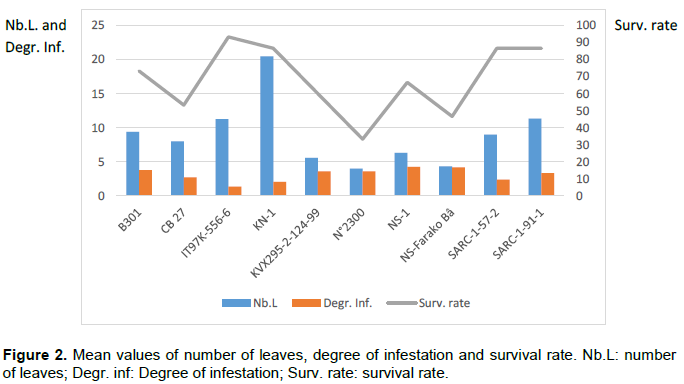 In Table 2 the results of the analysis of variance (ANOVA) for the area under the infestation progress curve (AUIPC) are presented. These results are showing that the  differences  among  lines  (P  = 0.001) and aphid strains (P = 0.007) were highly significant, while the interaction strain-line was not significant (P = 0.448). 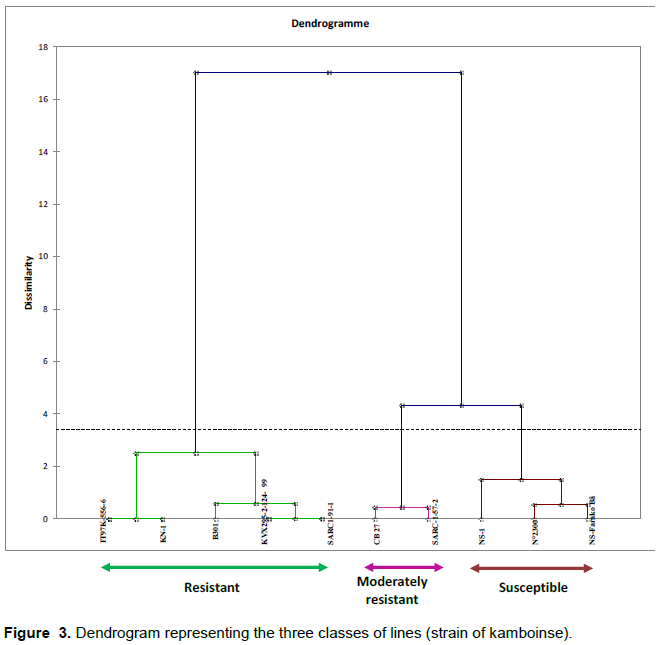 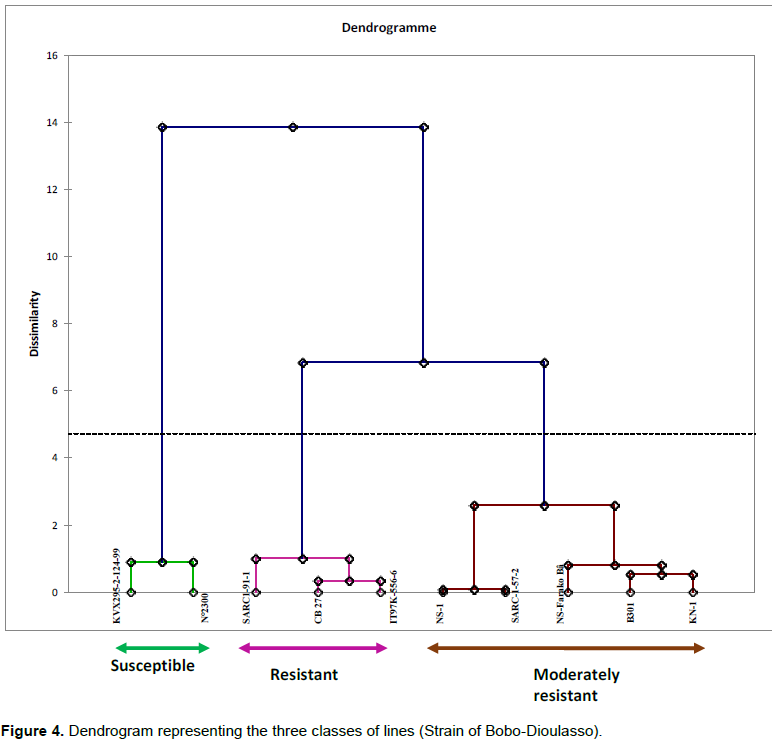 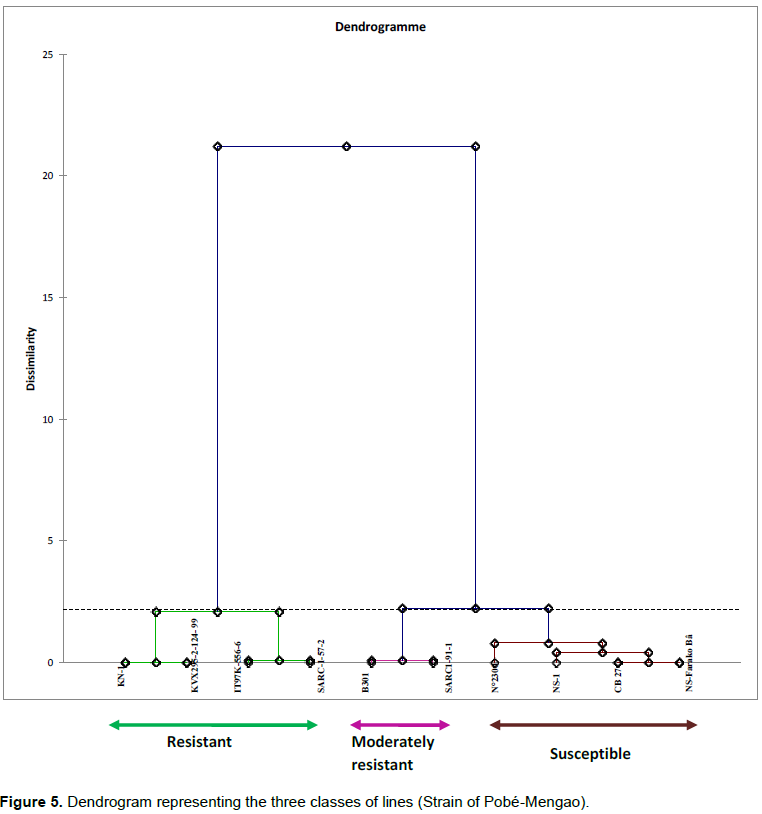 This preliminary analysis showed that line IT97K-556-6 is the highest resistant lines since it recorded the highest survival  rate, the lowest  degree of   infestation and an average number of leaves. Line No2300 by having the lowest survival rate (33%), a degree of infestation (3.6) and a low number of leaves (4) was considered to be the most susceptible line. It can also be noted that line KN1 has shown a better performance than expected.

The analysis of the AUIPC shows that the difference among lines is highly significant (P = 0.001). The capacity of multiplication of aphids depends upon the genotype of the line on which they develop. These results are in accordance with those of Laamari et al. (2008); Obopile and Ositile (2010) and Aliyu and Ishiyaku (2013). The difference among lines with regard to the area under the infestation progress curve is due to the capacity of some lines to slow down the development and multiplication of aphids by "antibiosis" (Teetes, 2007; Alabi et al., 2012; Omoigui et al., 2017). Thus, IT97K-556-6 has exhibited the highest level of antibiosis. It was the least favorable to the development of aphids and NS- 1 was  the most  favorable. According  to  Teetes  (2007), this antibiosis activity often results in increased mortality or reduced longevity and reproduction of the insect.

According to IITA-SAFGRAD (1981) KN1 is adapted to different agro-climatic zones of Burkina Faso, but not resistant to cowpea insects. The present study showed that this line is resistant to aphids, the difference might be explained by a change in  the  aphids biotype  used.  The biotype ‘K’ or aphid’s biotype of Kamboinsé was used for the screening (IITA-SAFGRAD, 1981). It may also be due to a physiological or even genetic change in the line. Moreover, in this study the confinement of aphids increased the parasitic pressure on plants. This pressure would have been able to induce an excessive compensatory response (Kusi, 2010) in KN1 physiological response, which was manifested by a much greater production  of  leaves. This  compensatory  response,  combined with the antibiosis activity developed by the line, gave it an unexpected resistance to aphids.

Cowpeas are of vital importance to the livelihood of several millions of people in Africa where it provide food and cash income. However, high yields in cowpea are seriously militated by insect pests like Aphis craccivora. Host plant resistance is an efficient and environmentally friendly way of controlling them.

The present study has shown that the speed of aphids’ multiplication depends upon the genotype on which they develop. So the line IT97K-556-6 has exhibited the highest level of antibiosis.  The screening test showed significant differences among lines. It was possible to identify four resistant lines (IT97K-556-6, SARC1-91-1, KVX295-2-124-99 and KN-1) and three moderately resistant (B301, CB27, and SARC-1-57-2) which may be used in breeding program to develop resistant lines or improve existing lines that are susceptible to A. craccivora. The study also showed significant differences among aphids’ strains suggesting that there are more than one aphids’ biotypes in Burkina Faso.

Authors gratefully appreciate the Alliance for Green Revolution in Africa (AGRA) for sponsoring this work. We also thank Dr Patrice Savadogo and Pr J. N. Ayertey for reading and correcting this document. We are thankful to all the technicians at the laboratories of Genetics and Entomology at INERA.