The objective of this study was to evaluate the effects of arbuscular mycorrhizal fungi (AMF) on the growth and development of maize (Zea mays) in a greenhouse at the University of Bangui  for three months under controlled conditions. Data collection was done at 30, 60 and 90 days after sowing (DAS) for growth parameters (plant height, crown diameter, number of leaves) and above-ground, root and total biomass were evaluated at 60 and 90 DAS. According to the results of this study, height growth showed a significant (P < 0.05) improvement of 106.7 cm when plants were inoculated with Gigaspora rosea. The treatment with the composite (G2+G3) showed higher diameter (15.50 mm), followed by the Acaulospora laevis strain with a diameter of 14.77 mm. The highest biomass values were obtained with the G4 mix strain (322.95 g for total biomass at 60 DAS and 535.44 g for total biomass at 90 DAS). From this study, it is evident that mycorrhizal fungi biofertilizers provide significant benefits to the plant, and can be used to improve corn growth and yield. Thus, this study could be further developed in the field.

Maize (Zea mays L.) is a tropical annual plant of the grass family. It is cultivated as a cereal for its starch-rich seeds, but also as a forage plant. The consumed part is the soft seed part, at the milky-doughy stage. The seed has a high energy nutritional value. The seed is  also  rich in proteins and vitamins. It is the most cultivated cereal in the world (König, 2017). The economy of the Central African Republic (CAR) is largely based on the primary sector (agriculture, fishing, hunting, forestry). For three decades, the agriculture and livestock sub-sectors, which employ nearly 70% of the country's workforce and account for nearly 50% of gross domestic product (GDP), have experienced low average annual growth of around 2% (FAO, 2016).

In tropical agriculture, the management of natural soil fertility is one of the major challenges that agricultural operators must face on a daily basis in order to move this agriculture, which remains empirical and based on subsistence, towards an economic, more rational and income-generating agriculture. Currently, the living conditions of agricultural operators as a whole leave much to be desired, given that the yields they obtain from their crops remain at a low level and do not allow them to take up the challenge of food insecurity, which in principle is a very important factor if we want to get out of the poverty that the population of the CAR is facing on a regular and permanent basis. One of the main constraints to agriculture in Sub-Saharan Africa is the constant decline in the level of soil fertility, mainly nitrogen and phosphorus, resulting in a continuous decline in crop yields, including maize (Saïdou et al., 2012).

The trial was conducted in a greenhouse for three months in the experimental field of the liaison office of the Higher Institute of Rural Development Rural (HIRD) of Mbaïki located in the Faculty of Health Sciences (FACSS) of the University of Bangui (altitude: 436 m, latitude North: 4° 22'38'' and longitude East: 18°33'37''). It consisted of growing maize in 10 L pots containing 7000 g of sterilized soil from Boukoko (Table 1). The plants were grown under the following conditions: average temperature 30/ 25.9 ± 2°C and relative humidity above 50%. 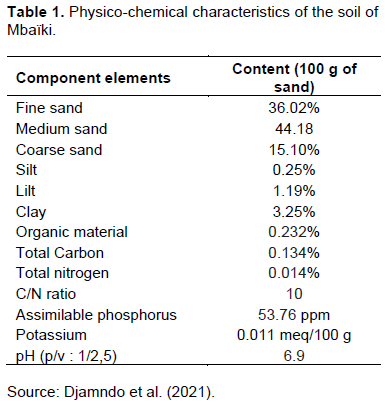 Maize seeds were sanitized by soaking in half strength bleach (90%) for five minutes and then rinsed thoroughly with tap water before being soaked for thirty minutes in sterile water. The corn was sown at a rate of seeds per pot and the de-sowing was done in the first week after sowing so as to leave one plant per pot. The plants were grown in greenhouse for 90 days . The culture substrate was a sterilized soil (1 h at 120°C) from Boukoko whose physico-chemical characteristics were recorded in Table 1.

The inoculation of these different strains of AMF was done one week after sowing. The mycorrhizal inoculum consisted of a mixture of spores, fungal propagules, fragments of mycorrhized roots and soil. The inoculum supply was 10 g or one teaspoon per plant (pot) with an average of 40 spores/g according to the dose used in sterilized medium (Boureima et al., 2007).

Plant height measurements were taken in each experimental unit at 30, 60 and 90 days after sowing (DAS) using a tape measure. Neck (crown) diameter was measured with an electronic caliper at the separation zone between the root system and the aerial part at 30, 60 and 90 DAS.  The number of leaves (NF) was counted on each plant at 30, 60, and 90 days of age.

The method used for the measurement of above-ground, root and total biomass was that described by Haro et al. (2020) modified. At 60 days after transplanting, each seedling was carefully stripped to recover the aerial part and all roots of the seedlings. All these parts were oven-dried at 70°C for 72 h until a constant weight was obtained for measurement of above-ground, root, and total biomass. After biomass measurement, the roots were used for the study of mycorrhizal colonization.

All data obtained were analyzed by analysis of variance (ANOVA) using R software for Windows. Tukey's test was used to determine any significant difference between treatments at the P < 0.05 threshold. All experiments were performed in four replicates.

Effect of mycorrhizal fungi inoculation on growth of corn plants

Corn plant height varied among treatments with different strains of mycorrhizal fungi used (Figure 1). Statistical analyses showed significant P= 0.0001) differences in height between inoculated and non-inoculated treatments. The average crown diameter of plants under the effects of the fungal strains studied was 13 mm. However, the G4 strain had higher (15.5 mm) diameter, followed by the G2 strain which had a diameter of 14.77 mm and finally came the other strains of AMF. The ANOVA performed shows a significant difference (P < 0.05) between inoculated  and  non-inoculated  treatments  between  the diameters at the neck of the plants (Figure 2). 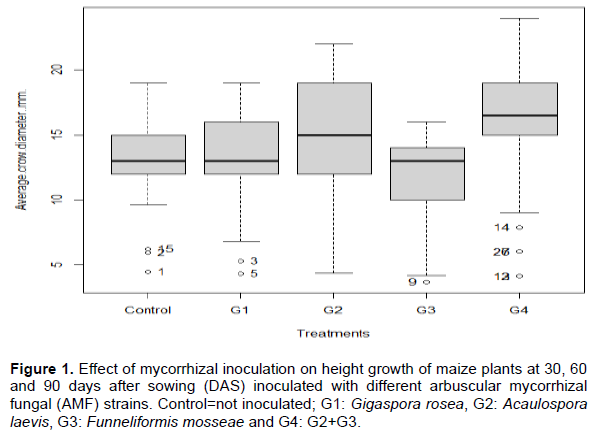 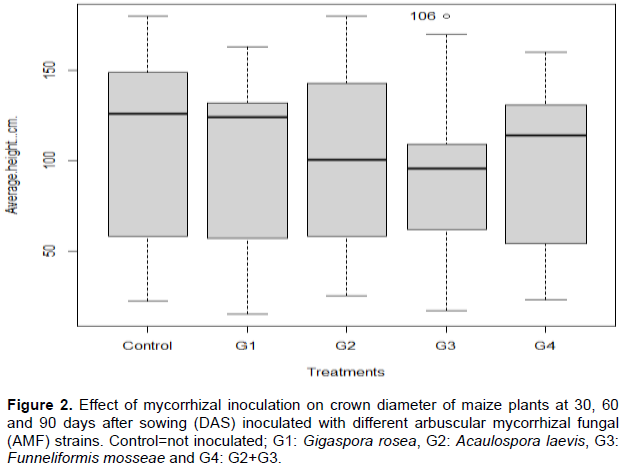 Inoculation had no significant (P = 0.0001) effect on average leaf number. Treatment G4, G2 and as well as the control treatment have an equal average of 8 leaves, during the whole study period in terms of number of leaves, followed by G1 and G3 plants with an equal number of leaves (Figure 3). 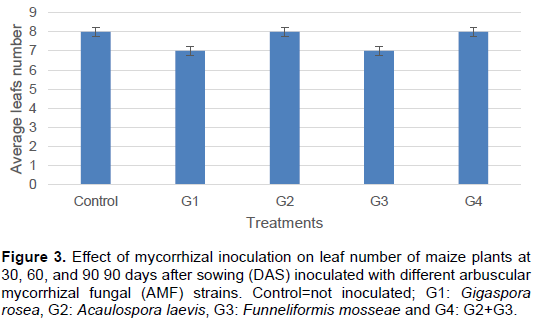 Results indicated satisfactory vegetative development throughout the crop. No signs of necrosis or leaf loss were observed. For each plant, the weight of the aerial and root parts varied depending on the strain inoculated. The aerial, root and total biomass parts showed variability according to the different treatments (Table 2). The results showed significant differences between the different treatments (P= 0.0001). The highest values were obtained with the G4 mix strain (322.95 g for total biomass at 60 DAS and 535.44 g for total biomass at 90 DAS). It is noted that the G1 strain presented a low total biomass (200.34 and 252.06 g), respectively, 60 and 90 DAS compared to the other treatments (Table 2).

The main purpose of this work is to evaluate the comparative effects of AMF on the growth and development  of  the maize crop. Results on the effects of treatments on plant height growth, plant crown diameter, leaf number, and above-ground and root biomass in the vegetative phase of maize plants revealed that AMF had a beneficial effect.

The results of this study on the average number of leaves obtained were not significantly different with the tested strains and the control. These results are not similar to the work of Parvathi et al. (1985) and Daft and El-Giahmi (2006) who reported that the inoculation of plants with AMF leads to an improvement in nutrition and a more significant increase in the number of leaves. The application of AMF resulted in a significant increase in root biomass, above-ground biomass and total biomass in inoculated plants, compared to non-inoculated plants after 90 days of sowing. These results are in agreement with those obtained by Diop et al. (2013) who showed that biomass production of Vigna is enhanced by mycorrhizal inoculation. Similarly similar results were found by Haro et al. (2017) who showed that mycorrhizal inoculation of cowpea with native inocula improves biomass production and seed production yield of this plant.

In tropical agriculture, the management of natural soil fertility is one of the major challenges that agricultural operators must face on a daily basis in order to move from an empirical and subsistence-based agriculture to an economic, more rational and income-generating agriculture. The results of the vegetative growth and especially the dry and fresh biomass tests show that the AMF strains (Gigaspora rosae, Acaulospora laevis, Funneliformis mossae) have a significant (positive) effect than the control treatment. Although variability is observed between the different growth parameters, the four AMF strains show interesting results adapted to the pedoclimatic conditions of the study site. Thus, microbial biofertilizers based on AMF could be recommended to producers  on  soils  poor  in  mineral  elements  such  as phosphorus.