Thiamethoxam is a neonicotinoid insecticide, which is believed to induce the expression of enzymes and proteins that activate plant defense mechanisms, thus improving the plant resistance to stress factors. The aim of this study was to evaluate the physiological performance of melon and watermelon seeds treated with thiamethoxam. The seed treatment consisted of five doses of thiamethoxam, 0, 2, 4, 6 and 8 mL per kilogram of seeds. The parameters evaluated were measured by a standard germination test, first count of germination test, laboratory vigor tests (accelerated aging and cold tests), and a field vigor test (seedling emergence). Thiamethoxam treatment resulted in increase in the normal seedling percentage in the standard germination, first count of germination, accelerated aging, cold and final seedling emergence tests. The doses of 4.0 to 5.0 mL of thiamethoxam per kilogram of seeds were most efficient in improving the physiological performance of melon and watermelon seeds.

Watermelon (Citrullus lanatus) belongs to the family Cucurbitaceae and is thought to have originated from Southern Africa (Paris, 2015). Today, watermelon is cultivated all over the world; the plant prefers warm seasons and is resistant to drought. The total world production of watermelon is about 110 million tonnes on approximately 3.5 million ha. The main producers at the global level are China (about 70 million tonnes), Turkey (3.8 million tonnes on 157,585 ha), Iran (3.75 million tonnes on 146,630 ha), Brazil (about 2.1 million tonnes on 92,000 ha) and the U.S.A. (about 1.8 million tonnes on 49,910 ha) (FAOSTAT, 2016).
Melon (Cucumis melo, Cucurbitaceae) is one of the most widely grown vegetable crops throughout the warmer regions of the world. The production levels for the five top producers are estimated to be 15 million tonnes in China (423,000 ha harvest area), 1.67 million tonnes in Turkey (100,578 ha harvest area), 1.4 million in Iran (80,211 ha harvest area), 1.03 million tonnes in Egypt (39,683 ha harvest area) and 990,890 tonnes in the U.S.A. (33,508 ha harvest area) (FAOSTAT, 2016).
Watermelon and melon have low germination and growth rates at both low (below 13°C) and high (above 40°C) temperatures, which creates problems for melon cultivation in northwestern and southern Brazil (Kozik and Wehner, 2014; Lira et al., 2015). These temperature effects can affect germination, seedling emergence and vigor in the cucurbits species. High seedling vigor is required to achieve good initial development of melon and watermelon so that production levels sustain the demand for these products.
Seed treatment is a term that describes the use of both fungicide and insecticide products and processes. The use of specific products can improve the growth environment for the seeds, seedlings and young plants. Thiamethoxam is a broad-spectrum neonicotinoid insecticide used to control a wide variety of commercially important crop pests. Neonicotinoids are the most important chemical class of insecticides introduced to the global market after synthetic pyrethroids (Jeschke et al., 2011). New horizons of crop protection have been opened by the development of seed treatment with neonicotinoids (Elbert et al., 2008).
Thiamethoxam is available as a seed treatment and is widely used in cropping systems (Jeschke et al., 2012). Its application to seeds has been observed to increase seed germination, root growth, seedling height and biomass accumulation in various crops, such as rice (Clavijo, 2008), oat (Almeida et al., 2012), cotton (Lauxen et al., 2010), soybean (Tavares et al., 2008) and maize (Afifi et al., 2015). Until now, the mechanism is not well known. A number of studies have demonstrated that the use of thiamethoxam as a seed treatment enhances agricultural production (Castro et al., 2009; Pynenburg et al., 2011; Sirchio and Sutton, 2007). It has been reported in the literature that this molecule fosters potential gains in seedling vigor (Macedo and Castro, 2011).
This study aimed to investigate the effects of increasing doses of the neonicotinoid insecticide thiamethoxam on seedling vigor of melon and watermelon under the climate conditions of southern Brazil, a subtropical region that may present adverse conditions for the initial establishment of melons and watermelons.

Experimental location
This study was conducted at the Department of Crop Science Seed Laboratory and at the experimental area of Faculdade de Agronomia Eliseu Maciel, Capão do Leão, Rio Grande do Sul State, Brazil. The experimental  area  was  located  at  a  latitude  of 31°52'00'' S, longitude of 52°21'24'' W, and altitude of 30 m above the sea level.
Seed treatment
Five different doses (0, 2, 4, 6 and 8 mL of the product per kilogram of seeds) of the neonicotinoid insecticide thiamethoxam (35 g a.i./L) were tested. Seed treatment was carried out according to the method proposed by Nunes (2005). The solution volume used (product + water) was 1.6 L per 100 kg of seeds. The product slurry was distributed over the walls of a plastic bag. Seeds were placed in the container, which was sealed and shaken for 3 min to coat seed uniformly with the insecticide slurry. The seeds (3,000 for each treatment) were then placed on paper towels and allowed to air-dry in the laboratory. This procedure was performed for each species (melon and watermelon) separately.
Standard germination test and first count of germination
The standard germination test (, 2015) was conducted using 200 seeds for each treatment, which were incubated at 25°C for 14 days for watermelon and eight days for melon on moistened paper towels. The first count of germination test was conducted along with the standard germination test, and seedlings were counted at five days for watermelon and four days for melon. The tests were replicated four times, and only normal seedlings were counted.
Vigor tests
Accelerated aging test
The accelerated aging test was performed by aging seeds at 41°C for 48 h using a wire-mesh tray method (McDonald and Phaneendranath, 1978). A single layer of 200 seeds from each treatment was placed on a 10 × 10 × 3 cm copper wire mesh tray inside an 11 × 11 × 3.5 cm plastic box containing about 40 mL of water at the bottom. Following the incubation, the seeds were germinated at 25°C for four and eight days for melon and watermelon, respectively, as described above. The percentage of normal seedlings was recorded.
Cold test
The cold test was performed on four 200-seed replications of each treatment by exposing the samples to 10°C for five days on moistened blotter paper and then transferring to 25°C for five and four days for melon and watermelon, respectively, for germination.
Seedling emergence
The seedling emergence test was conducted on four 100-seed replications in soil (Planosol Haplic Eutrophic Solodic) at the experimental area of the Crop Science Department. Seed samples from each treatment were manually distributed in 1.5-m long and 0.25-m apart rows at a 2 to 3 cm depth. Emerged seedlings were counted on 14th day.
Experimental design and statistical analysis
The experimental design was completely randomized with four replications for each treatment and species. Data were subjected to regression analysis using the Statistical Analysis System for Windows software (WinStat, v. 1.0) by choosing the most suitable model based on the F-test at 5% probability and the highest coefficient of determination (R2). Results were fitted by an orthogonal polynomial, second-degree regression equation based on the significance of the F-test at 5% probability. Results were fitted to the second-degree regression equation according to the doses used in this study.

The standard germination test, first count of germination, accelerated aging, cold test and seedling emergence results showed an increase with the doses, from zero up to the maximum dose point located between 4 and 5 mL of thiamethoxam per kilogram of seeds for both species, melon and watermelon. From this point, the results decreased as the dose of thiamethoxam increased.
Germination rate and first count of germination
According to Figure 1, the seed treatment with the bio-activator increased the germination rate for both evaluated species, watermelon and melon, with the increases of 8 and 6% for melon and watermelon, respectively. The maximum effective dose was between 4.6 and 4.7 mL per kilogram of seeds for both species, watermelon and melon. Similar results were obtained by Clavijo (2008) and Almeida et al. (2009, 2012) for rice, oat and carrot seeds and by Tavares et al. (2008) for soybean seeds . These authors observed that thiamethoxam accelerated the seed germination of the investigated species. 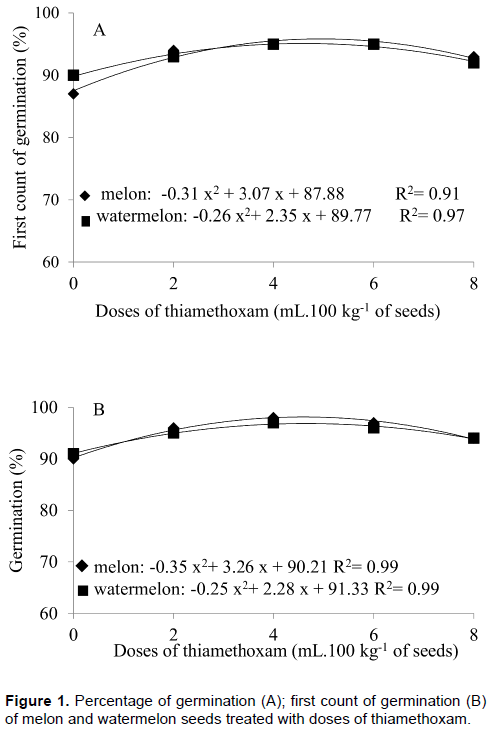 The seed vigor, evaluated by the first count of germination (Figure 1B), was higher for the seeds treated with the neonicotinoid insecticide, which showed increases of 8 and 5% for melon and watermelon, respectively. An increase in the first count of germination could be observed from the zero dose, reaching the point of maximum effectiveness at a dose of 4.99 mL per kilogram of seeds for melon and 4.53 mL per kilogram of seeds for watermelon. According to Castro and Pereira (2008), thiamethoxam stimulates the enzyme activity, thus providing better initial development and uniform seedling emergence for soybean seeds treated with this product.
Accelerated aging
The same tendency was observed in the accelerated aging test (Figure 2A). Thiamethoxam treatment resulted in a higher percentage of seed germination after a period of stress induced by the high temperature and humidity. 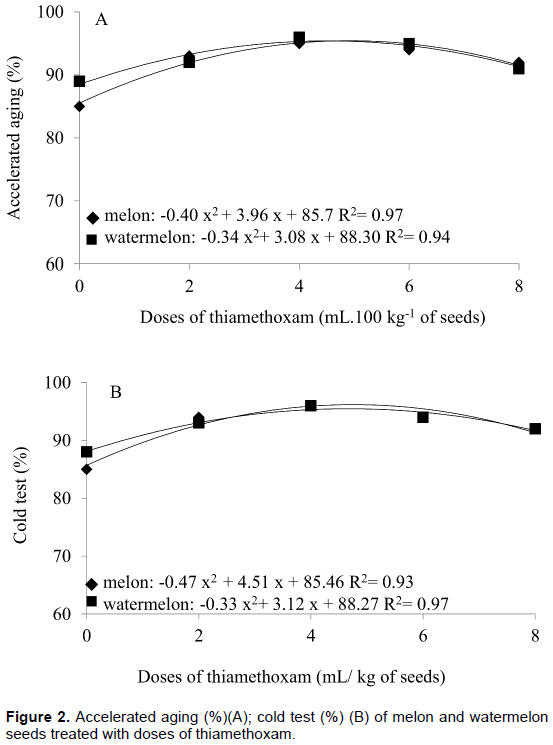 The germination of the melon seeds treated with thiamethoxam increased by 10%, and that of the watermelon seeds treated with thiamethoxam increased by 7%. The response in the accelerated aging test  increased from the zero dose to a dose of 4.88 mL per kilogram of seeds for melon and 4.48 mL per kilogram of seeds for watermelon. Lauxen et al. (2010) reported similar results for cotton seeds treated with thiamethoxam, which were subjected to the accelerated aging test. Tavares and Castro (2005) have suggested that this response occurs because thiamethoxam stimulates the protection mechanisms in plants exposed to various types of stress. The neonicotinoid insecticide penetrates plant cells and activates various physiological reactions, such as the expression of functional proteins involved in plant defense mechanisms.
Cold test
Figure 2B confirms that thiamethoxam conferred increased resistance to seeds during the cold test and increased the percentage of normal seedlings by up to 11% for melon seeds and 8% for watermelon seeds. This resistance may be observed as an increasing curve from zero to the maximum, which corresponds to doses of 4.76 and 4.64 mL per kilogram of seeds for melon and watermelon, respectively. From the maximum point, the curve decreases, that is, the increasing dose of thiamethoxam decreases the percentage of normal seedlings. Based on these results, the effect of the insecticide is the improvement of seed resistance to various stress factors.
Seedling emergence
As shown in Figure 3, thiamethoxam promoted the seedlings emergence of the species evaluated. The increase in seedling emergence was 7 and 6% for melon and watermelon, respectively. This increase is seen from zero up to a maximum, which was observed at a dose of 4.7 mL per kilogram of melon seeds and 4.38 mL per kilogram of watermelon seeds. Similar results were obtained for carrot (Almeida et al., 2009), rice (Clavijo, 2008), oat (Almeida et al., 2012), cotton (Lauxen et al., 2010) and soybean seeds (Tavares et al., 2008). 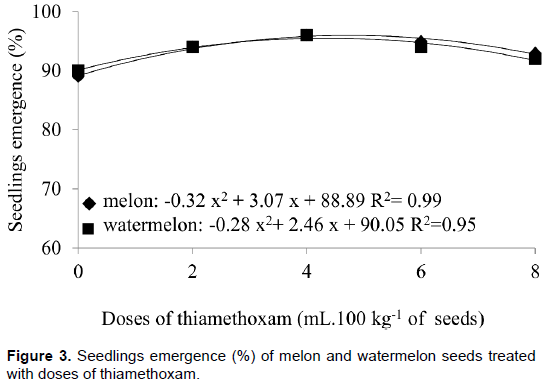