In order to determine the characteristics of phosphorus adsorption using the Langmuir and Freundlich isotherms and its relationship with some of the chemical and physical properties of soils, a study was developed at the Embrapa Soil Laboratory with soil samples (0 - 30 cm) from four classes of topsoil: Orthic Chromic Luvisols, Eutrophic Cambisols, Fluvic Neossol and Eutrophic Cambisols Typical. The hyperbolic model of the Langmuir isotherm was fitted by the non-linear regression technique. We performed a correlation analysis between the isotherm parameter values and soil characteristics that reflected the Phosphate Maximum Capacity. The values of remaining phosphorus ranged from 16.28 to 43.73 mg L-1 for the soils. For the Langmuir isotherm, the maximum phosphorus adsorption capacity (MPAC) values ranged from 0.2793 to 0.3954 mg g-1 of soil. The RY soil had the largest amount of adsorbed phosphorus (0.3954 mg g-1), giving this soil a high MPAC.
Key words: Tropical soils, phosphorus, buffering capacity.

In Brazil, most soil has a high degree of weathering, with large amounts of iron and aluminum oxides and clays of the kaolinite group of minerals that have surface charges that vary according to the reaction of the soil solution (Schaefer et al., 2008). Thus, the soil can behave as either a source or a drain of P, acquiring most of the P added to the soil by linkage to colloids and making it unavailable to plants. As the degree of weathering of these soils is increased, they become more electropositive, adsorbing anions such as phosphates (Novais and Smyth, 1999; Carvalho Filho et al., 2015). Many of these weathered soils, and even some less weathered, despite having levels of P that are not significant, only have a small amount of P available due to the low solubility of their forms of P and, by the strong interaction of phosphate with the soil, forming compounds of low solubility in soils linked to different combinations of iron, aluminum, calcium and organic matter (Rolim Neto et al., 2004; Bortoluzzi et al., 2015; Fink et al., 2016; Brito Neto et al., 2017). Despite its importance for the growth and development of plants, P is a macronutrient that is required in only small quantities, yet it is one of the elements that limit productivity in most cultures (Gatiboni et al., 2007) due to the adsorption phenomenon that is common to all soils. In northeastern Brazil, different classes of soil occur, from the least to the most weathered, with different energies of adsorption of P.
The reactions of adsorption and the precipitation of P in the soil begin as soon as P is added, so that in acidic and highly weathered soils, a portion of the P is adsorbed on the surface of clay minerals, such as iron and aluminum oxides, and another part precipitates with Fe and Al present in soil solution. However, in a few weathered soils with pH ranging from neutral to alkaline, part of the P added is adsorbed onto the surface of clay minerals and another portion precipitates with Ca in the soil solution. According to Gérard (2016), the P adsorption capacity of clay minerals may be similar to or higher than that of iron and aluminium oxides depending on the specific surface area of the particular soil components. From a practical standpoint, it is not easy to separate the reactions of adsorption or precipitation of P in soil; to do this, isotherms of Langmuir and Freundlich adsorption are used to describe the P (Novais and Smyth, 1999). In this regard, our aim with this work is to determine the adsorption capacity of P in four soil samples from Brazil’s Northeastern region. 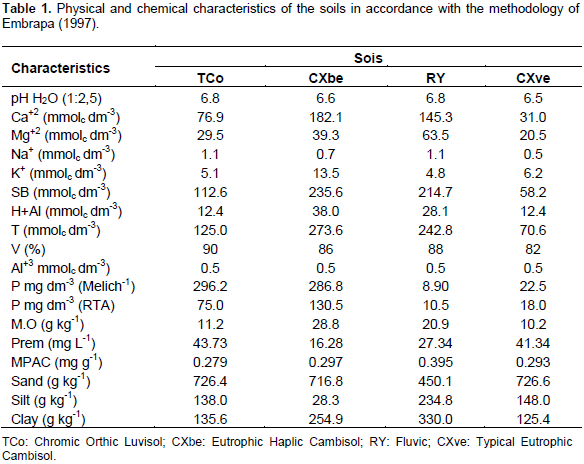 To determine the MPAC, 2.5 cm-3 of soil was used. Then, 25 mL of CaCl2 10 mmol L-1 was added to a 250-mL Erlenmeyer flask containing P according to the concentrations mentioned above. After horizontal shaking for 24 h, the suspensions were centrifuged at 3000 rpm for five minutes and then filtered. The content of P in the equilibrium solution was determined by colorimetry (Braga and Defelipo, 1974), which was performed in triplicate. From the data obtained in triplicate, Langmuir and Freundlich adsorption isotherms were constructed by plotting the amount of P adsorbed in the soil (Q) on the ordinate and the concentration of P in equilibrium solution (C) on the abscissa. The hyperbolic form of the Langmuir equation is given by the following expression:

Where x/m is the amount of P adsorbed to the soil in mg P (x)/g soil (m), (b) is the MPAC (mg g-1) of P in the soil, (c) is the concentration of P in the equilibrium solution (mg L-1), and a is the constant related to the adsorption energy of the element in soil (mg L-1) (Olsen and Watanabe, 1957). The constants and (b) were estimated by the linear Langmuir equation, obtained by transformation of the hyperbolic equation, which corresponds to: C/x/m= C+1/ab/b. The linear form of the Freundlich equation is given by the following expression: log (x/m)= log k+(1/n). log (c) Where: x/m is the mass of the solute associated with the solid phase (mg kg-1), (c) is the solute concentration in equilibrium solution (mg L-1), KF: is the coefficient of Freundlich adsorption (cm3 kg-1) and (n) is an estimate of the tuning parameter (dimensionless). The clay fraction (Ø <0.002 mm) was separated in the Physics Laboratory of Embrapa Solos, according to Embrapa (1997). Simple linear regression equations were adjusted for the parameters of Langmuir and Freundlich isotherms, which were correlated with the soils’ physical and chemical characteristics.

X-ray diffraction indicated that the mineralogy of the clay fraction presented different characteristics among the soils analyzed. Minerals were identified from the following groups: kaolinite (Ka), Mica (Mi), smectite (E), chlorite (Cl), Goethite (Gt) and quartz (Qz). The TCO sample Figure 1A) revealed the presence of mica, kaolinite, smectite and goethite, where the order Mi>Ct>E>Gt indicates an estimate of the relative prevalence of each mineral held based on the XRD patterns. A sample of CXbe (Figure 1B) revealed the existence of kaolinite, mica, chlorite, quartz and goethite, and the estimate of the prevalence of these minerals was in accordance with the order Ct>E>Cl>Qz>Gt according to the XRD patterns. Analysis of a sample of CXve revealed the presence of minerals such as kaolinite, mica, and goethite in the order Ct>E>Gt, demonstrating the predominance of these minerals in this soil (Figure 1C). The x-ray diffractogram for RY demonstrated the presence of kaolinite, smectite, mica and quartz in this order: Ct>E>E>Qz, representing the predominance of these minerals in the soil (Figure 1D), since the absence of goethite demonstrates the preservation of soil minerals, which may contribute to P availability to plants. The high coefficients of determination obtained from the linearized equations of the Langmuir and Freundlich isotherms (Table 2) indicate that the mathematical models were adequately effective in quantifying the adsorbed P in these soils. 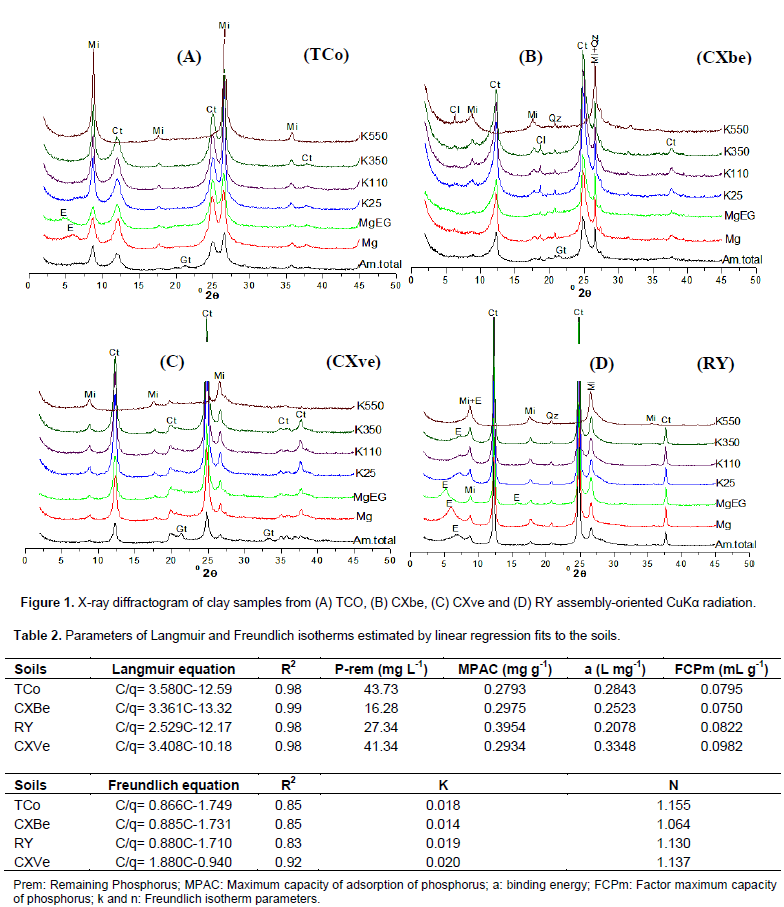 The values â€‹â€‹of maximum adsorption capacity for phosphorus (MPAC) in the soils ranged from 0.2793 to 0.3954 mg g-1, with a positive correlation between MPAC and the clay content.The Langmuir isotherm was more efficient in determining the MPAC of the soil compared to the Freundlich isotherm. Also, P adsorption parameters (MPAC, Prem, and the constant k of the Freundlich equation) are reliable variables to characterize phosphorus adsorption.