Soybean (Glycine max (L.) Merr.) stands out as one of the most important crops in the Brazilian agribusiness. The production of this crop in the 2015/2016 harvest  was estimated at 101.18   million tons, which corresponded to an increase of 5.1% as compared to the previous harvest (CONAB,  2016). Part  of  this success is due  to the programs of genetic breeding kept by different institutions of research and universities in Brazil (Oda et al., 2015).

Three basic requirements must be met for granting protection to a cultivar: the cultivar must be distinct, homogeneous and stable (Viana, 2013). According to Nogueira et al. (2008), the 38 descriptors, including the additionals descriptors used to differentiate cultivars of soybean are insufficient, which points out to the need of broadening the list of these descriptors.

In this context, it is important to study the possibility of using instruments alternative to calipers in the measurement of soybean seedlings, however, with efficiency similar to that offered by digital calipers. The millimeter ruler is a tool of easy handling that does not require a source of energy and has a cost much inferior as compared to calipers. Thus, the aim of this study was to evaluate the performance of millimeter ruler and caliper in the measurement of the lengths of hypocotyl and epicotyl in plants of soybean and to compare the two methods.

The study was conducted in a greenhouse at the Federal University of Viçosa, Campus of Rio Paranaíba, in 2014 and 2015. The seeds used had random sizes and came from different cultivars of soybean. The seeds were sown at a standardized depth of 3.0 cm in a soil previously prepared and were kept in pots of 3 dm3. The cultural practices were carried out according to the recommendations.

The two methods of evaluation were compared in order to assess their performance and agreement. This comparison was performed using the software GENES (Cruz, 2013). For this, the following reliability measures were adopted:

is the value obtained with a millimeter ruler,

is the value obtained with

a caliper and corresponds to the average of values obtained by measuring with a ruler.

(v) Average, sample standard deviation and confidence interval (with 95% of confidence), separately for digital caliper and millimeter ruler, for the lengths of hypocotyl and epicotyl. 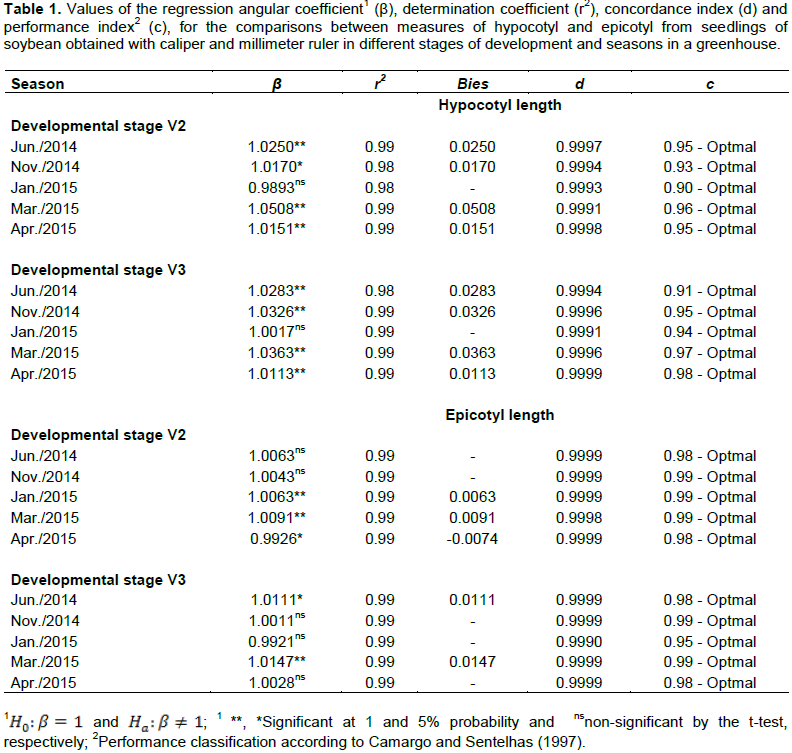 The estimates of the angular coefficient of regression for the length of hypocotyl at stages V2 (January/2014) and V3 (January/2014) and for the length of epicotyl at stages V2 (June/2014 and November/2014) and V3 (November/2014 and January/2015) had a β non-significant by the t-test (α>0.05). This indicates that the trend line of the ruler follows the values obtained from caliper in a ratio 1:1. β was significant (α≤0.05) for the other planting seasons indicating that the value of the estimate is different from 1. The estimates of determination coefficient were higher than 0.97, which indicates that the models estimated explained well the variables.

The bias for the length of hypocotyl was positive in the evaluations performed at V2 and V3 stages in four planting seasons (June/2014, November/2014, March/2015, and April/2015). This indicates that the millimeter ruler overestimated the values as compared to the measures obtained from the caliper. The maximum overestimation (0.0508) was observed in March/2015 in stage V2. A positive value of bias was observed for the length of epicotyl in stages V2 (January/2015 and March/2015) and V3 (June/2014 and March/2015). The millimeter also overestimated the values as compared to the digital caliper. However, the highest overestimation found had a low magnitude (0.0147 mm), corresponding to the planting season in March/2015 and to the V3 stage. The negative bias (-0.0074) observed in the stage V2 (April/2015) indicates that the millimeter ruler is underestimating the measure  as  compared  to the digital caliper.

The values of the index of performance were higher than or equal to 0.90 and according to Camargo and Sentelhas (1997), it could be classified as optimal. Thus, the values obtained with a millimeter ruler agreed with those obtained from the digital caliper demonstrating that the millimeter ruler is recommended as an alternative to the digital caliper.

The estimates of  the sample standard deviation for the lengths of hypocotyl and epicotyl are shown in Table 2. The greater difference between the estimate obtained for the millimeter ruler and the digital caliper was 0.26 mm and corresponded to the length of epicotyl at stages V2 (January/2015) and V3 (March/2015). According to Gomes (2009), the larger the value of a sample standard deviation, the greater is its variation. With this, it can be observed that the magnitudes of the sample standard deviation were practically similar to the peer-to-peer analysis for the values obtained from caliper and ruler in the different developmental stages and planting seasons. 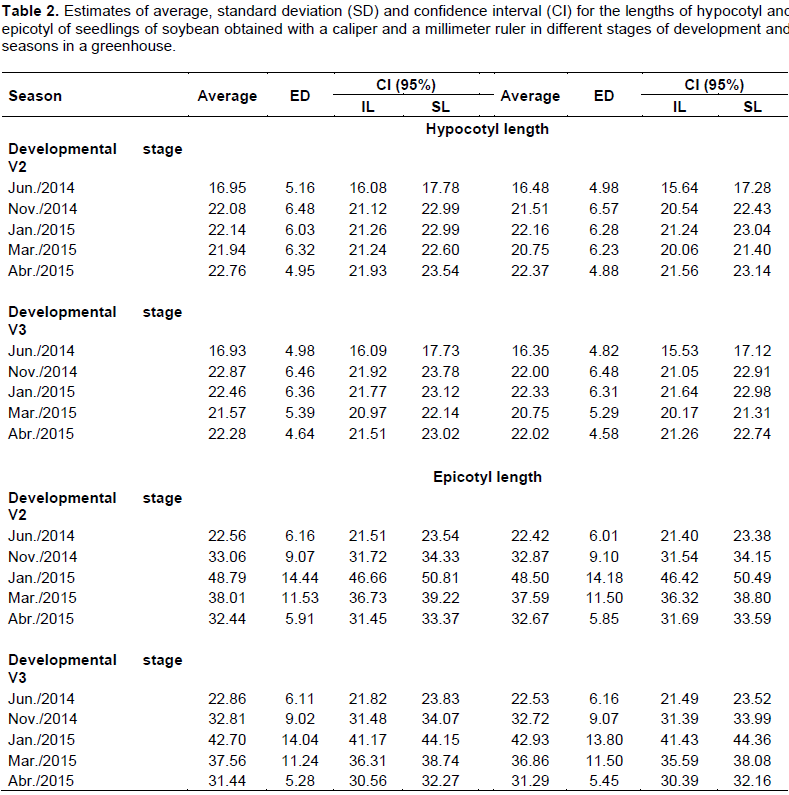 As shown in Table 2, the confidence interval for the caliper comprises the averages obtained from the ruler and vice versa. This was also observed for other intervals estimated and suggests a similar precision between the two  methods. According   to   Montgomery   and  Runger (2012), the confidence interval involves the true value of μ with a confidence of  being a precise measure of the estimation of average. According to Gomes (2009), it can affirmed that 100 (1-α) is the fiducial probability that the true value is within a given interval of confidence.

A series of studies report the utilization of the statistics used in this work for comparing the different estimates of reference evapotranspiration (Tagliaferre et al., 2012; Oliveira et al., 2008). In soybean, these statistics were used to validate models of simulation for this crop in Santiago, RG, Brazil (Gomes et al., 2014) and to compare the estimate of leaf area of old and modern varieties by a non-destructive method (Richter et al., 2014).

The statistical indicators showed excellent relation  and concordance between the values obtained with a millimeter ruler and those obtained with a digital caliper. The decision of what tool might be used in the evaluation of experiments must consider factors such as the experience, ability and visual acuity of the evaluator, brightness in the place of evaluations as well as the availability of financial resources to acquire the types of equipment.

The results obtained in this work indicate that the lengths of hypocotyl and epicotyl might be used in the tests of distinctiveness, homogeneity and stability of cultivars of soybean. Besides these alternative descriptors, the implementation of computer algorithms based on non-linear approaches represents a modern alternative in the area of genetics and breeding and has provided  results  with  higher  precision  as  compared to traditional statistical approaches (Arqub and Abo-Hammour, 2014; Arqub et al., 2017).

The authors thank the agencies CAPES, CNPq and FAPEMIG for the financial support.