The performance of the planter is directly linked to the mechanisms of contact with the soil, more specifically to the furrow openers mechanism. The aim of this study was to evaluate the responses of the soil, machine, and the corn crop, according to furrow openers hoe type and working depths, in an eutroferric Red Latossol and no-tillage system. Soil disturbance, drawbar power and force, speed of operation and corn grains yield was evaluated. The soil disturbance presented difference for the factors; openers and depths. The distinct behavior of the openers, due to their geometry, was a limiting factor for the working depth that determines the area of disturbed soil. Energy demand to the tractor presented difference for openers and depths. The opener with angle of inclination of 17° and width of 21 mm (Opener 1) caused higher soil disturbance and lower force and power. In a Red Latosol with no-tillage system, the working depth of 90 mm â€‹â€‹required lower draft demand and a soil disturbance suitable to the corn crop development.

One of the factors that contribute to no-tillage system is the selection and proper use of agricultural machinery and equipment. Cepik et al. (2010) debate that farmers should consider using roe type furrow openers for fertilizer application in areas of no-tillage. The furrow openers, according to Siqueira and Casão Junior (2004), are tools whose function is to cut and  penetrate  the  soil, opening the furrow. The action angle and type of rod present different forms of soil penetration and depth variability. The use of furrow openers is conditioned to the use of cutting disks front to prevent the occurrence of bushings associated with the use of double disks for furrowing and seed deposition.

The increasing of the depth performance  of  the furrow openers of the seeders to break in a localized form compacted layers on the surface, is a manner that can also stimulate root development and reduce the effects of soil compaction on corn yield (Conte et al., 2009). The furrow mechanism of rod type, compared to the use of double disk, can favor the increase of grain yield (Kaneko et al., 2010).

The use of furrow openers for the deposition of fertilizer to the detriment of dual disks is growing among farmers. Basically, it summed up to the fact that the chisel type mechanism best break the compacted layers and also work better in clayeyer soils, reducing wasted time and inputs (Conte et al., 2009).

The relationship between the draft and the degree of compaction can be adjusted for use of openers with different geometries, or by changing the operation depth; these are some of the factors that directly influence the draft (Conte et al., 2007). Agreeing with the authors, Cepik et al. (2005) studied the draft in an Argisol under no-tillage and concluded that there was an increase in demand traction with increasing of the depth, and its magnitude depended on the state consistency of the soil.

Furrow opener system for the fertilizer deposition increases the draft requirements, fuel consumption and the slippage index, in relation to the furrow opener of type double disks (Santos et al., 2008). However, Seki et al. (2012) found that the shanks promotes greater soil disturbance. This greater disturbance capacity, when in unfavorable external conditions and heterogeneous areas can stimulate the development of crops and according to Mello et al. (2003) promote an increase of 11.3% in corn yield.

Therefore, the aim of this study was to evaluate the responses of the soil, machine, and the corn crop, according to the furrow openers hoe type and working depths, in an eutroferric Red Latossol and no-tillage system.

The experiment was conducted in the agricultural year 2011/2012, in the UNESP/FCAV, Jaboticabal City, Brazil, with an average altitude of 560 m, average slope of 4% and Aw climate (subtropical), according to the Köeppen classification. The soil of the experimental area is classified as eutroferric Red Latosol, with 48% of clay (Embrapa, 2006; Andrioli and Centurion, 1999).

A Valtra-AGCO tractor, model BM 125i, 4x2 TDA, was used to pull the planter. It presents power of 91.9 kW (125 cv) engine at 2300 rpm. The planter was a Jumil, JM3060PD model, pantograph, which present mechanical meter for seed distribution, furrow opener hoe type for furrow opening and fertilizer deposition, double disks for seeds with deposition set at 3 cm depth, double compacted wheels in “V” shape, operating with four planting rows and mass of approximately 3,000 kg. The displacement speed of the tractor/planter set was of 4.0 km h-1.

A randomized blocks design was used, with 2 × 3 factorial scheme and four replications. The treatments were two furrow openers hoe type (Figure 1), and three working depths (90, 110, and 150 mm). The area of â€‹â€‹each plot was 100 m2 and consisted of four rows of corn, spaced at 0.90 m. The variables analyzed were: Drawbar power and force (average, peak and specific); soil disturbance, planting speed and corn grains yield. 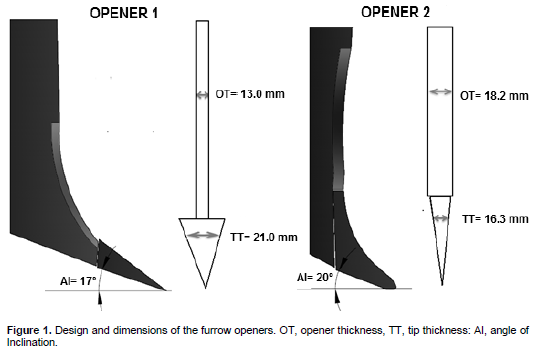 To perform the acquisition and data storage relating to the drawbar power and force was used a system composed by Micrologger CR23X from Campbell Scientific Inc. The required draft was measured using a load cell Shimizu, TF 400 model, with a capacity of 100 kN and accuracy of ± 1 N, installed on the drawbar of the tractor.

The soil disturbance, width and depth of furrow were evaluated as follow: the furrow was opened manually being possible to model the furrow. Thus, these variables were analyzed as follow:

1. Furrow width (FW) and working effective depth (WED): With the help of a profile meter with 45 rods, spaced of 1 cm and height 30 cm. On the back was nailed a cardstock paper with horizontal lines spaced of 0.5 cm for easy reading and precision on the study, wherein the positioning of the rods upper end copies the geometric form of the furrow. For the reading was used a digital camera, analyzing them in a computer.  FW was defined since the first rod that fell on the ground inside the furrow showing different measures. WED was defined by the average of two first rods that showed the higher values.

2. Soil disturbance: with the values from the profile meter, was obtained the transversal section of disturbed soil and the data were analyzed by the integral of the trapezoidal rule (Equation 1), according to Ruggiero and Lopes (1996) and Bertonha et al. (2015).

The specific draft and power per soil area disturbed correspond to the relationship between the application of average power demanded by the seeder, and the area of the disturbed soil by the furrow openers.

The real displacement speed was measured by radar, Dick Jonh brand, RVSII model, with an error of ± 3%, installed on the side of the tractor, making a 45° angle to the surface of the soil, as recommended by the manufacturer. The radar works at a frequency of 1 Hz. Considered as real displacement speed, the average obtained by the radar when the tractor was operating in the plot. Speed â€‹â€‹values â€‹â€‹were obtained in m h-1 and converted to km h-1.

For grain yield was conducted manual harvesting in 5 m of each row, the two central rows of each plot, after the time which the culture reached physiological maturity and water content close to 18%. The corn cobs were threshed in stationary machine, corrected to 13% of water content and grain yield calculated in kg ha-1.

Before planting, there was a data collection of 5 samples for soil mechanical  resistance to penetration for the characterization of the area, in random points and depth of 0.30 m, to determine the cone index (CI).

The investigation of the data normality was performed by the Anderson-Darling test using the program MINITAB 16® (2003), and when asymmetric, Log (x) transformation was applied. Analyses of the results were processed with the SISVAR (Ferreira, 2011) and ASSISTAT (Silva and Azevedo, 2009) statistical program, performing variance analysis and applying the F test, and when there were significant, Tukey test at 5% probability was applied.

The results of (CI) to the 0.00-0.10, 0.10-0.20 and 0.20-0.30 m layers corresponded to 1.47, 2.81 and 3.29 MPa with average levels of water of 25.56, 25.64 and 26.21%, respectively. Opener 1 showed higher soil disturbance than Opener 2, corresponding to 29.8% (Table 1). This increase represents the largest tip width (16.3 to 21 mm). As the working depth is increased, tillage increased by 42 and 119% compared to that of the 90 mm depth. It was noted that the opener width has a direct influence on the vertical soil disturbance. Regarding to the performance of the tractor/planter set the results showed that there was difference to opener as well as in the working depth, with no interaction between them. Regarding the average  and peak draft required by the opener, it was observed that the opener 1 required lower draft than 2, and the increase of the working depth also demanded greater average and peak draft (Table 1). 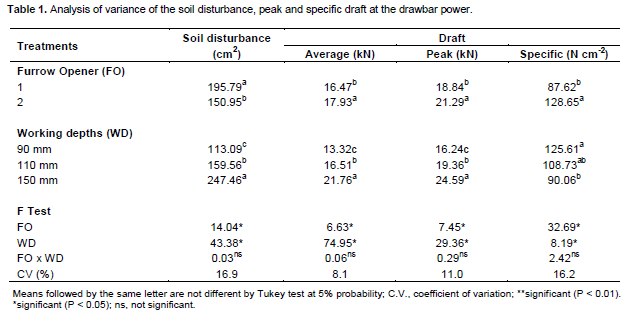 The Opener 2 showed less soil disturbance; however, it demanded higher draft. It can be explained by the fact that Opener 2 has greater rake angle than Opener 1, and it provided forward disturbance, instead of to up disturbance.

Palma et al. (2010) working at four working depths of the furrow openers (0.10, 0.15, 0.20 and 0.25 m) observed when the shoe (tip) of the opener works on the most compacted layers, there is a higher demand for draft than when working with the opener below the layers, which offer higher soil mechanical resistance to penetration. This factor occurs due to the angle of inclination that the furrow opener mechanism have in relation to the soil.

The specific draft was similar to those discussed for the average and  peak draft as the behavior of the opener tip.

The specific draft for Opener 2 was higher than Opener 1 (around 50%). This fact is related to the angle of inclination, and the smallest angle allows that the soil disturbance up, while the largest angle leads it go to the front, requiring greater force.

The specific draft decreased from lower depth to highest working depth. The ideal condition would be that the opener breaks up the soil at 45° angle (Spoor and Godwin, 1978), however, when deepens the opener, the angle of rupture decreased, showing lower specific draft. This fact shows that when working with incorrectly working depth, it cause in the furrow wall a mirroring (compaction), reducing the exploration area of the crop roots.

The planting speed was not influenced by the factors (Table 2), thus, the increasing of the opener did not change the operational field capacity.

The corn grains yield did not differ among the treatments and was similar to the data obtained by Debiasi et al. (2010) that worked with two working depths (60 and 120 mm) and three types of soil cover.

The opener with angle of inclination of 17° and width of 21 mm (opener 1) caused higher soil disturbance and lower force and power. In a Red Latosol with no-tillage system, the working depth of 90 mm â€‹â€‹required lower draft demand and a soil disturbance suitable to the corn crop development.

The authors thank the São Paulo State University (UNESP/FCAV) and CAPES for supporting the work.