Analysis of trend in agricultural services received by farmers in Benue State, Nigeria

The study was carried out to assess trend in agricultural services received by farmers in Benue State, Nigeria. The three agricultural zones in the state, twelve blocks, thirty cells and four hundred and thirty two farmers constituted the samples for the study. Data were analyzed with percentage and mean score while some were presented in charts. Findings revealed that majority (86.8%) of the respondents were males, married (89.6%) with a mean household size of 8 persons and mean age of about 48 years, respectively. On average, they had about 20 years of farming experience, owned and cultivated 4 and 3 hectares of land, respectively. Extension visit was agricultural service that was relatively enjoyed by the respondents. The study advocated for private sector investment in agriculture especially in provision of farm credit and other crucial agricultural services to farmers in order to increase productivity and output.

Smallholder farmers constitute majority of farmers producing over 80% of the food supply in developing countries (The UK Hunger Alliance, 2013); but they depend on a large extent on external inputs and services. Their reliance on these external provisions is as a result of their lack of sufficient access to inputs (seeds, fertilizers, planting materials, etc.), services, credit (African Smallholder Framers Group (ASFG), 2011), livestock, financial capital, and other productive assets, such as land and water. Farmers access to productive inputs and services are critical to increased agricultural productivity.   Therefore,    helping    small-scale   farmers improve their level of living which is critically important not only for the farming families themselves, but for society as a whole (FAO, 1994).

In Nigeria, agricultural support services are mainly provided by the public sector mainly through the establishment of institutional support in the form of agricultural research, extension, commodity marketing, input supply, and land use legislation. The private sector also contributes to agriculture support services through investment in financing, sponsorship of research and breakthrough on agricultural issues in universities, capacity building for farmers, and provision of financing to farm businesses. On the other hand, international governmental and non-governmental agencies including the World Bank, Food and Agricultural Organization of the United Nations, etc., also contribute through on-farm and off-farm support in form of finance, input supply, and strengthening of technical capacity of other support institutions, etc. (Eze et al., 2010). There is therefore a general commitment of government, private sector and donor agencies towards the provision of agricultural services to small-scale farmers. In view of these, it is expected that over the years, farmers’ access to agricultural service should improve with the concomitant improvement in their production. This study was a survey of the trend on these services that farmers in the area have received for the period before year 2007, 2007, 2008, 2009, and 2010.

Purpose of the study

The overall purpose of the study was to analyze the trend in agricultural services received by farmers in Benue State, Nigeria. Specifically, the study sought to:

i. Describe the socio-economic characteristics of respondents,

ii. Determine the trend in agricultural services received by farmers in the area.

The study was carried out in Benue State, Nigeria. The state is referred to as the food basket of Nigeria, because of the abundance agricultural resources which invariably attracts farmers from other areas. Proportionate sampling technique was used to select twenty five percent of blocks in each of the three agricultural zones in the state; hence, five, three and four blocks were selected from zones A, B, and C, respectively giving a total of twelve blocks. Three cells were randomly selected from each of the selected blocks giving a total of 36 cells. Twelve farming households were selected from each cell. This gave a total sample size of four hundred and thirty two households. Data for the study were collected using interview schedule. Data on the socio-economic characteristics of respondents were collected by asking respondents to indicate their age in years, sex (either male or female), number of people in their household, farming experience in years, and whether they belonged to any social organization. Data on agricultural services received were collected by asking respondents to indicate the agricultural services they received during the period under study (that is, before 2007, 2007, 2008, 2009, and 2010). Agricultural training, loans from public and private sectors were  some  of  these agricultural services in the list. Data were analyzed with percentage, while some were further presented in bar charts. 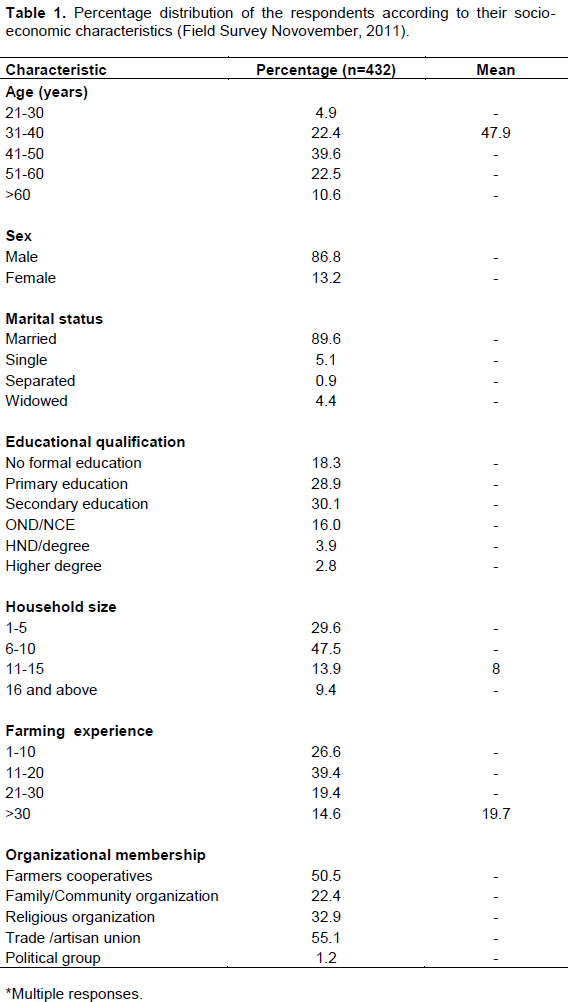 Agricultural services received by the respondents before 2007 to 2010

Figure 1 shows that about 50% of the respondents had extension visits before 2007 with decline (49%) in 2007 and increase (59% and 64%) in 2008 and 2009, respectively and another decline (60%) in 2010. Findings reveal that respondents had more extension contact in 2010 than before 2007 irrespective of high farmer-extension agent ratio being experienced in countries like Nigeria especially as years go on due to poor remuneration and consequent high turnover as well as labour drift in the profession. This scenario suggests that there will be improved agricultural productivity among farmers  since  experiences  with  extension programmes show positive impact on productivity and incomes (Global Forum for Rural Advisory Services (GFRAS), 2012). 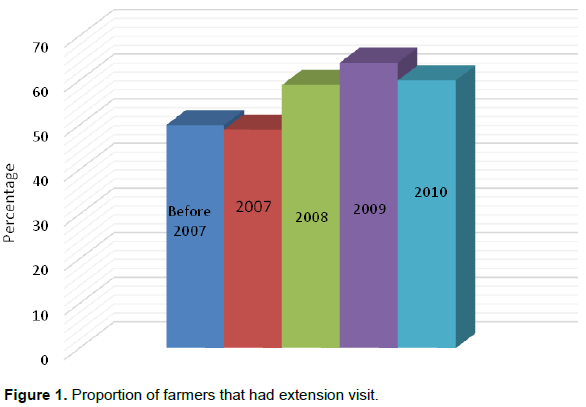 Figure   2    shows  unsteady  trend  in  the  proportion  of  farmers that received subsidy from the government during the period under study. About 18% of them received subsidies from government before 2007, which rose to 21% in 2007, declined to 19% in 2008, rose again to 25% in 2009 and declined again to 22% in 2010. The findings show that proportion of farmers that received subsidies   from   government  was  generally  low  hence contradicting the understanding that policy of agricultural subsidy is now being followed in some countries of Africa like Tanzania, Nigeria, and Zambia (INICA, 2012). 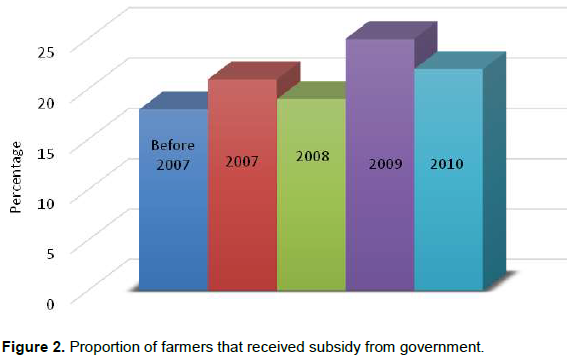 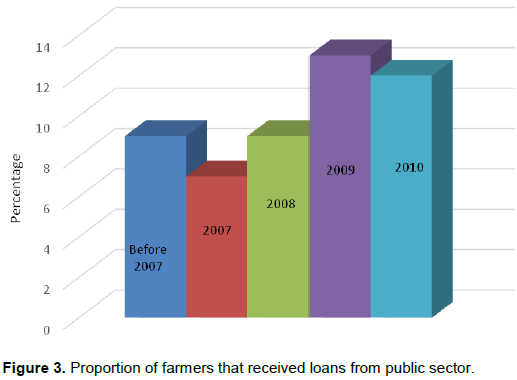 Generally, loan from public sector is not always available and when available the targeted beneficiaries like farmers encounter difficulties in securing it due to corruption and lack of collateral.  Other factors that may have constrained them from securing loan from this sector may be bureaucracy involved in procurement of loan and inability  of majority of the beneficiaries to repay their loan on time (Aneke, 2007). 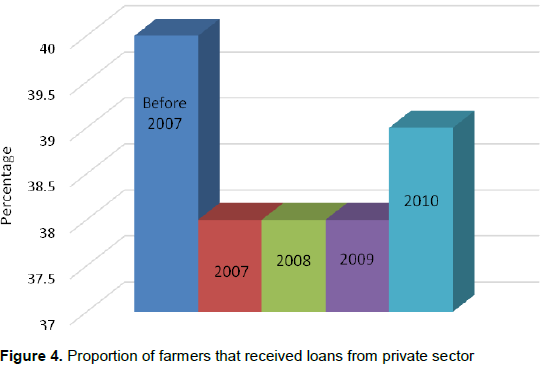 Generally, the  proportion  of respondents that received loan from private sector was also low, but was greater than those who sourced from public sector in all the years considered irrespective of the fact that private sector banks interest rates are slightly higher as compared to public sector banks (Bank, 2011). This point to the role private sector will play in boosting agriculture if their activities are properly incorporated and harnessed toward agricultural growth. The finding also supports the fact that non-profit and for-profit private companies were found to have  minimal  involvement  in  agricultural  research  and development in Nigeria (Flaherty et al., 2010). 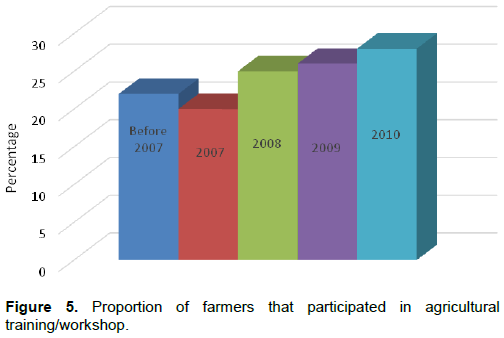 Based on the findings of this study, it can be deduced that the farmers were relatively young, had formal education, and large household size which when harnessed properly will provide labour for engagement in agricultural and non-agricultural activities. They owned large land, but did not cultivate the entire land they owned. Farmers received less agricultural services, in recent time. This may invariably affect agricultural production and demoralize these farmers. Private sector development and investment in  agriculture  especially  in the area of provision of credit and order services to farmers should be embarked upon. This can be done through establishment of commercial and micro-finance banks, thrift and cooperative societies, private extension organizations, etc., so that farmers can be provided with their agricultural needs  and thus move into profitable farm  ventures. Since, their services are often not biased, more available, efficient and timely to meet up profitable and time sensitive agricultural activities.

Government should provide more incentives and subsidies to farmers. Most importantly, they monitor the modalities for the distribution and acquisition of these services so that they can get to the right recipients that can deploy them in agricultural tasks for a healthier and richer nation.