There is a growing concern about the presence of pesticides in food and the health problem they may cause. Awareness of this issue, consumers opt for organic food consumption. Organic agriculture is a farming system ecologically sustainable, economically viable and socially just, capable of integrating man and environment. This study evaluated the nutritional composition of some crops grown in an organic (Org) and conventional (Con) systems, produced in Uberlândia-MG. Samples of lettuce, collard greens and carrots from both certified farming systems were gathered from local supermarkets and moisture, lipids, ash, dietary fiber, carbohydrates, protein and energy were obtained from them. Moisture was greater and the amounts of lipids, proteins and ashes were lower in conventional vegetables. Dietary fiber content in organic collard greens was significantly greater (4.37% ± 0.28 Org) than in conventional ones (3.15% ± 0.12 Con). Differences in nutrient composition of crops grown organically and conventionally were observed and more studies are needed for better understanding of nutritional value differences.

In recent decades, the consumption of organic food is growing and expanding at a high rate (Willer and Kilcher, 2012). Organic food consumption is increasing because the consumers are  more  concerned  with  environmental issues and possible health problem that pesticide residues can cause (Borguini and Torres, 2006). In this context, organic agriculture is an ecologically sustainable food production system, economically viable and  socially just, able to integrate man and environment. Some studies demonstrate differences between organic and conventional foods, when attributes such as flavor and nutritional value are considered (Favaro-Trindade et al., 2007), but so far the evidence is not sufficient to affirm the superiority of the organic and the benefits of its consumption for consumer health (Arbos, 2009).
The consumption of carrots, collard greens and lettuce is recommended in the diet, since these foods have low calorie and high content of dietary fiber, vitamins and minerals. Carrots, collard greens and lettuce are consumed vegetables, being of great importance in food and human health (Boeing, 2012). The consumption of organically grown vegetables has been growing in recent times, and there is little information on the nutritional composition of these organically produced vegetables.
A stimulus to boost the choice of these foods is the most accurate knowledge on the nutritional composition of organic food. Thus, this paper investigates the nutritional composition of crops grown in organic (Org) and conventional (Con) cultivation systems, produced in the city of Uberlândia - MG.

Conventional and organic samples of lettuce (Lactuca sativa L.), collard greens (Brassica oleracea L. acephala) and carrot (Daucus carota L.), in commercial maturation stage and available for consumption, were obtained in March 2014 from local establishments (Uberlândia-MG). The organic samples were certified by competent bodies. The samples (≈ 5 kg) were packed in polyethylene bags, transported in polystyrene boxes containing ice to the Laboratory of Bromatology of Federal University of Uberlândia, within a maximum of 2 h after collection. The samples were lightly washed with running water and distilled water and dried with paper napkin. Five replicates were collected for each sample and the quartering method was used to obtain representative samples.
Moisture of samples in natura were determined by drying them in an oven at 65°C until constant weight was obtained, the fixed mineral residue (ash) was determined by incineration in a muffle furnace at 550°C and total lipids by extraction method using Soxhlet extractor and employing ethyl ether as solvent for 8 h under reflux, according to the methodology described in Analytical Standards Manual from Adolf Lutz Institute (Zenebon et al., 2008).
The protein determinations were performed according to the semimicro-Kjeldahl method for the total nitrogen measurement, described by Association of Official Analytical Chemists (AOAC, 1980). The nitrogen to protein conversion factor was 6.25. To determine the dietary fiber, the official nonenzymatic-gravimetric method for the determination of total dietary fiber (AOAC 993.21) modified by Li and Cardozo (1994) was used. The carbohydrate content of the food was calculated by subtracting the sum of the contents in the components: moisture, protein, fat, ash and total dietary fiber, from the entire set. This procedure is predicted in the DRC No. 360, of December 23, 2003, ANVISA (BRASIL, 2003).
Statistical analysis
Five replicates were made of each vegetable and statistical analyzes were performed using the F-test at 5% probability, using the statistical program SAEG-UFV 9.1.

The results of the moisture, lipids, ash and protein values (expressed in g 100 g-1) for the chosen vegetables grown in organic and conventional systems, obtained in this study are shown in Table 1.

In this work, organic foods presented lower moisture content, therefore, they contain higher dry matter content and a higher concentration of nutrients. It is believed that the lack of nitrogen sources available in organic systems leads to an increase in the amount of dry matter. Moisture can be influenced by storage conditions, crop type, time of the year, and crop age (Silva and Queiroz, 2006). Darolt (2003) surveyed the main comparative studies between organic and conventional foods, and observed higher content of dry matter, lower level of nitrates and higher content of vitamin C, in organic products, particularly in green leaves. According to the author, this occurs due to the lack of nitrogen sources available in organic systems. Vidigal et al. (1995) observed an increase in water content of lettuce cultivated  on  the  average  organic   compounds.   While Souza et al. (2005) claimed that adding organic and/or mineral fertilizers does not affect the water content of lettuce.
Higher lipid content (p ≤ 0.05) was observed in organic collard greens leaves compared to conventional samples, corroborating whit Rocha et al. (2008) who studied the composition of organic and conventional collard greens. The difference in the amount of lipids from organic and conventional foods may be due to the type of food studied. The lettuce and carrot samples showed no difference in the amount of lipids. A study carried out in the metropolitan region of Curitiba, comparing organic and conventional lettuce and carrots, also did not find difference in the amount of this nutrient (Arbos, 2009). Lima et al. (2009) did not find difference in the lipid content of organic and conventional vegetables.
The amount of ashes, measured in this work were higher in organic food, which was also evidenced by Borguini (2002), that point out higher levels of minerals (phosphorus, potassium, magnesium, sulfur, sodium, iron and zinc) in organic tomato samples. The ashes represent the inorganic residue left over the combustion of organic matter, and its composition refers to the amount of mineral substance present (ARBOS, 2009).
The results on the protein content show that organic vegetables have higher values than conventional ones. For carrots, this value was significantly higher (Table 1). In the work of Arbos (2009), it was observed that the organic lettuce has a higher protein content, although not significant. Results of some studies also show a trend in protein accumulation in organic foods (Stertz et al., 2005a; Worthington, 1998; Lima et al., 2009). The greater protein content in organic foods can be assigned to the type of fertilizer used. It is true that farmers producing organic food use fertilizers with high nitrogen content, originated from animal waste and organic matter of other cultures. Weston and Barth (1997) reported a positive correlation between the protein content and the use of fertilizer rich in nitrogen.
In this study, it was observed that only the collard greens had significantly higher organic fiber than conventional (Table 2). In the other vegetables, it is observed that there was a trend of higher fiber content on crops grown organically even with no significant difference occurred. As lignin is part of the total fiber and its structure contains phenols, it is possible that the type of cultivation may interfere with the increase of phenolic compounds since these compounds are produced by the plant as a defense against pathogens (Daniel et al., 1999). 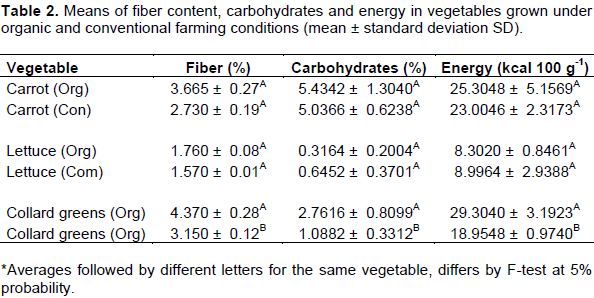 The increase in fiber content can be explained due to the increased production of phenolic compounds by plants as a defense to insect attack (Young et al., 2005). In the work of Rocha et al. (2008), there was no difference in fiber content between organic and conventional foods, however, according to Daniel et al. (1999), the application of some herbicides can increase or decrease the secondary metabolites content, including total phenols, which leads to an uncertainty in the fiber content of conventional foods in Rocha‘s work.
The fibers form a group of substances resistant to the action of human digestive enzymes can be classified into water-soluble and water-insoluble fibers. Most pectins, gums and certain hemicelluloses are soluble and cellulose, other pectin, most of the hemicelluloses and lignin are insoluble. Surveys show the beneficial effects of dietary fiber in the prevention and treatment of intestinal diseases, cancer reduction and control of diabetes mellitus (Kelsay, 1978; Marques et al., 2011).
As shown in Table 2, there was no significant difference in carbohydrate concentration observed in the analyzed vegetables. Only the organic collard greens had higher levels of carbohydrates than conventional. Unlike what was found in this study, Arbos (2009) studied the composition of organic and conventional lettuce, noted that organic lettuce contains higher carbohydrate values (conventional lettuce showed 1.7 g of carbohydrates 100 g-1, while the organic was 4.87 to 5.68 g 100 g-1).
In analyzing the results, it is possible to conclude that organic vegetables studied in this work tend to have a higher content of dietary fiber than those from conventional system. The moisture content was  lower  in organic, which may justify a larger amount of energy obtained. Lettuce showed no difference in moisture content, fiber or carbohydrates, resulting in no difference in the energy quantity, which is in line with the work of Stertz et al. (2005a), who studied nutritional quality and lettuce contaminants (L. sativa) conventional, organic and hydroponic, found no difference between the three.
On the average, the data found in this work shows that vegetables grown under organic management tend to have a higher concentration of nutrients when compared with the conventional ones.

There was difference in the nutritional composition of some vegetables grown organically and conventionally, analyzed in this study. Organic ones have mostly lower moisture content and higher amount of nutrients: proteins, ash and fiber. A higher amount of lipids was observed only for collard greens.
More studies, including those related to micronutrients and controlled production must be carried out for further investigation on nutritional values. More accurate knowledge of the nutritional composition of organic vegetables may be the key for boosting the consumption of this type of food.