The tomato crop (Solanum lycopersicum L.) is one of the most important vegetables worldwide. Mexico in 2018 ranked ninth worldwide with a production of 4,559,375 tons (Balcha et al., 2015; SIAP-SAGARPA, 2020; FAO, 2020), is valuable because of the flavor and beneficial health properties of its secondary compounds (Slimestad and Verheul, 2009; Shah et al., 2015; Alam et al., 2019; Bailoni, 2020). It is cultivated in open-air and greenhouse conditions, but in both cases, is necessary vigorous seedlings, that guarantee the uniformity in seeds germination, and a fast growth for an efficient production (Herrera et al., 2008; Ozer and Kandemir, 2016).

In the worldwide horticultural areas, including Mexico, some centers produce even better and sustainable seedlings to ensure they're offering for a high-quality transplant. Due to its contribution to the quality of seedling, the substratum employed is a fundamental factor for the development and growth of them (Burés, 1997; Lovarelli and Bacenetti, 2017). The employment of growing media has been one of the principal strategic in horticulture (Masaguer et al., 2005; Roehrdanz et al., 2019; Feng et al., 2020). The most utilized substratum for the development of tomato seedlings is the peat. In Mexico, the mixture of Peat Moss (fine) vermiculite, dolomitic lime, initial fertilizer load and wetting agent or the SUNSHINE® commercial product is employed, and recently FLORAVA® peat mixtures coming from the Baltic countries are introduced, its physicochemical and biological characteristics allow adequate germination and growth of the seedlings, but this material is expensive for local farmers. Peat is considered a scarce resource, expensive, and because of its unsustainable exploitation, its use has been reduced and restricted (Zárate, 2013; Ceglie et al., 2015; Chrysargyris et al., 2017; Abdel-Razzaka et al., 2019); even in some countries its exploitation has been prohibited encouraging the use of organic wastes as a substrate instead of their disposal (Moral et al., 2013; Milinkovic et al., 2019; Xue and Farrell, 2020).

Currently, seedling production is carried out taking advantage of substrates available in the region, mixed with peat and synthetic minerals such as expanded clay or vermiculite. However, different substrate mixtures differ in their characteristics and properties. The response of plants to different substrates varies according to the material with which they are mixed and the proportions used. In tomato cultivation, the substrates with the best yields are tezontle, vermicompost mixtures, bocashi, pellets and coconut fiber (Ortega-Martínez et al., 2016; Garbanzo-León   and  Vargas-Gutiérrez,   2017).   Other researchers report that the use of sawdust and rice husk substrates increases the yield and quality of tomato in the greenhouse, and reduces costs as a result of a cheap substrate (Dyamurshaeva et al., 2017).

Other researchers have used different materials for the production of tomato seedlings and their use depend on the characteristics physical, chemical and biological properties, cost, and availability of the substratum (Andrade and Valenzuela, 2002; Utria et al., 2005; Muratalla et al., 2006; Santana et al., 2006; Berrospe, 2010; Ortega et al., 2010; Giuffrida and Consoli, 2016; Milinkovic et al., 2019; Xue and Farrell, 2020). For example, others alternative substrates to the peat are coconut coir (Noguera et al., 2003; Mariotti et al., 2020), rice hulls (Evans and Gachukia, 2007; Goodman, 2020), switchgrass (Altland and Krause, 2009; Schambach et al., 2020), mushroom compost (Medina et al., 2009; Postemskya et al., 2016), endemic seagrass species (Cocozza et al., 2011; Mininni et al., 2013), extracted sweet corn tassel (Vaughn et al., 2011), and giant reed wastes (Andreu-Rodriguez et al., 2013). For that reason, it is necessary to count on local materials. Those which are steady and of high harmlessness and quality such as the by-products of the local industry like the agave bagasse, the pine bark and coconut fiber; its use as a substrate component is an alternative of easy availability and at a low cost to diminish the environmental impact by the excessive use of peat moss (Zárate, 2013; Drzymulska, 2016).

This research aims to identify the most suitable combination of peat moss with organic materials based on pine bark, agave bagasse, and coconut fiber for tomato seedlings production as alternative substrate to reduce the peat moss pure implementation.

The variety Ramses F1 of an undetermined habit of S. lycopersicum, the most cultivated in the region was used. After planting the seed (one seed per hole) the watering was done through a sprinkler pump until percolate. Then the bowls were stacked by treatment and were covered with black polyethylene for 72 h. The emergence of the seedlings was evaluated from the fourth day. The Steiner nutritive solution was applied at 14 days with a concentration of 25%, at 21 days with the 50%, and until the harvest with a 100%, considering a relation of ammonium nitrate of 30:70 (Steiner, 1961). The number of everyday irrigations with the nutritious solution varies from two to three, according to the environmental conditions, and sometimes the watering was only done with acidulated water to control the electrical conductivity in the substrate. The irrigations were given to the seedlings with a manual sprinkler. The seedlings were harvested after 27 days after sowing (Ozer and Kandemir, 2016).

The seed germination, compaction of the root ball, height of the seedling, the diameter of the stem and total dry weight were the variables evaluated. The percentage of germinated plants per bowl was obtained after 15 days. The index of the root-ball compaction was obtained considering the following scale: (1) very hard to extract, (2) hard to extract, (3) moderately easy to extract, (4) easy to extract, and (5) very easy to extract with a compacted root ball (Díaz, 2011). After 27 days the height of the seedling by using a metallic millimeter tape was tested. The reference points were the base of the stem and the apical sprout. The width of the stem was calculated with a Vernier digital Truper® (6¨/150mm). The seedlings were transferred, washed, and dried in a stove to 65°C to measure the total dry weight (Peñaloza and Durán, 2015).

The experimental design was a randomized complete block design with eight treatments with six replicates. Each experimental sample comprised six plants per bowl and six bowls per treatment. The analysis of variance (ANOVA) was done through the statistical package SAS version 2004 (SAS Institute, 2013).

After 15 days, the germination  of  tomato  seedlings  was measured. The T1=BMTAEV3, T3=BMCPTAEV4, T4=FCMTAEV, T5=BMTAEV5 and T8= BMTAEV6 treatments reached the highest percentages of germination. There are statistical differences between T7=CPSSC and the other treatments, no significant differences were recorded between T1=BMTAEV3 and the T6=M3SC (common substratum employed by the producers) and T2= CPTAEV2. Fí and Cristóbal (1995) show that to get achieve good, productive results and uniformity in the seedlings, the germination must be above 90.0%. In this study, all the tested substrates are above the quoted germination values. These results are also superior to the ones found by Favaro et al. (2002) where they attained 87.0 and 72.5% of germination when peat/sawdust and peat mixture were used. Also, Ortega et al. (2010) reported 90% of germination when pure peat was used, but mentioned 12% when peanut shell was tested.

Several studies mentioned that pure peat used as substratum recorded germination and emergency data of tomato seedlings between 66 and 98% (Quesada and Méndez, 2005; Santana et al., 2006; Fernández-Bravo et al., 2006), similar results were recorded in this study with T1=BMTAEV3 and T8=BMTAEV6 treatments using 60 and 40% peat in mixture with other materials, respectively, but with the maximum values reported by these researchers (Figure 1A).

Santana et al. (2006) used compost as a substratum to germinate tomato seeds registering 83.0% of emergency; this is attributed to the material total porosity, because this physical characteristic allow the internal gas exchange, increasing the content of oxygen required by the seeds to germinate (Handreck and Black, 2002). 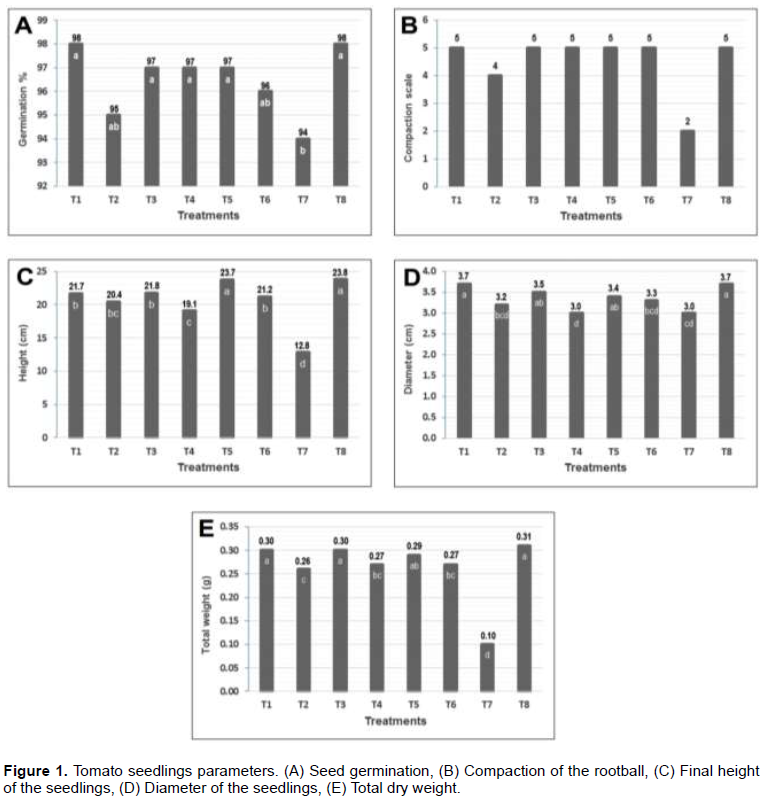 Treatments T1=BMTAEV3, T3=BMCPTAEV4, T4=FCMTAEV, T5=BMTAEV5, T6=3M3SC, and T8= BMTAEV6 record the highest value of root ball compaction (scale=5- very easy to extract with a compacted root ball) (Figure 1B), while treatment T2= CPTAEV2 registered a scale=4 - easy to extract, and T7=CPSSC a scale=2 - hard to extract because of poor radical development. The root system has important physical and physiological functions since the beginning of seeds germination and emergence, and up to the growth and development of the seedling for transplant, the establishment in the transplant depends on adequate development of the root system, a quality seedling is identified by a vigorous stem. Root growth is limited to the volume of the container used for seedlings development, however, in roots development these grow horizontally around the growth medium which facilitates the complete extraction (substrate-root) of the mold, this benefits the establishment of the seedling in the transplant (Brutti et al., 2015).

The treatments T5=BMTAEV5 and T8=BMTAEV6 produced higher height of 23.9 and 23.8 cm, and presented significant differences with the rest of the treatments. The treatments with the highest seedlings also presented a higher percentage of emergences, which may be attributed to a good emergence in the first days of cultivation. These results differ from that of previous studies, although measurements are made over similar period of time (27-30 day), for example, Ortega  et al. (2010) tested pure peat, composted sawdust, composting, arable land and peanut shell getting 15.0, 12.0, 17.0, 7.0 and 8.0 cm seedling height. Muratalla et al. (2006) used corn straw and "tezontle" (volcanic rock) and registered 7.57 and 8.18 cm, while Berrospe (2010) implemented cachaza (filter mud) as a substrate getting 5.8, 5.0, and 4.5 cm as the highest values with this material. Jacobo and Uexkül (1973) mention that it is favorable to use mixed or unmixed compost as a substratum owing to its capacity of activating the microbiological  processes  by   its   structure,  increasing airing and capacity of humidity retention, it also acts as a temperature regulator; it delays mineral phosphoric acid fixation by making the phosphorus more absorbable, favoring a more suitable growth of the seedling (Figure 1C).

Treatments T8= BMTAEV6 and T1=BMTAEV3 obtained the best values with 3.67 and 3.66 mm, where there are significant differences among the treatments, favoring a bigger development of the stem related to the other substrate (Figure 1D). These treatments exhibit significant differences among the others, favoring a bigger development of the stem. The suitable physical properties offered by these substrata (proper airing capacity and water-air curve and good porosity) offer the best conditions for the plant development, generating vigorous seedlings with strength and resistance for transplant. Muratalla et al. (2006) reported diameter tomato seedlings of 2.09 to 3.21 mm (small) when corn straw was used as a substrate, while Ortega et al. (2010) obtained diameters of 5.0, 4.0, 6.0, 1.0, and 1.0 mm with substrata based on pure peat, composted sawdust, composting, agricultural land and peanut shell. Berrospe (2010) mentioned a 4.5 and 1.2 mm as a maximum and minimum rate for seedlings width when cachaza (filter mud) was used as a substrate. Other studies show a width of stem between 1.3 and 3.3 mm at the end of seedbed production; but when peat moss is used, the seedling growing between 1.3 and 2.1 mm (Quesada and Méndez, 2005; Santana et al., 2006; Fernández-Bravo et al., 2006; Shibuya et al., 2006; Herrera et al., 2008).

In the study, the diameter observed in T1=BMTAEV3, T3=BMCPTAEV4, T5=BMTAEV5, T6=M3SC, and T8=BMTAEV6, is according to the commercial recommendable parameters, but in T1=BMTAEV3, T5= BMTAEV5, and T8=BMTAEV6 it is registered better germination, suitable compaction of the root ball, a bigger height, and diameter, getting seedlings with proper vigor for transplant. The best results were achieved with treatment T5=BMTAEV5, T1=BMTAEV3, T3=BMCPTAEV4, and T8=BMTAEV6 with 0.29, 0.30, 0.30, and 0.31 g (Figure 1E). Different effects in the growing dynamic of the seedlings and accumulation of dry matter were presented with the tested substrate, being the best-performing treatments the compounds by Agave-bagasse/peat/expanded clay/vermiculite (T1, T5 and T8) in proportions of 30:60:5:5, 50:30:10:10, and 40:40:10:10 v/v.

It is shown that mixtures of agave-bagasse with expanded clay, and vermiculite are a substrate alternative for tomato  seedlings   production,    reducing   the    use   of  expensive and scarce material such as peat by up to 40 and 60% (v/v). It is recommended to continue testing different organic residues alone or in mixtures that have potential characteristics to a substrate for crop production, and to produce from these value-added products that compete with commercial products.

The authors would like to thank to the Instituto Politécnico Nacional of México and Universidad Politécnica de Madrid of Spain for their support.