Maize (Zea mays) is the third most important cereal crop in the world after rice and wheat in production and it is stable  food   crop   in   Ethiopia.   It  is  believed  to  have originated in Mexico and to have been introduced to Ethiopia in the 1600s to 1700s (McCann, 2005). It is cultivated  in  a  wider  range of environments than wheat and rice, because of its greater adaptability (Koutsika-Sotiriou, 1999).

In Ethiopia, maize grows under a wide range of environmental conditions between 500 and 2400 m above sea level. The mid-altitude sub-humid agro-ecology is the most important maize producing environment in Ethiopia (Kebede et al., 1993). Therefore, maize production in Ethiopia is constrained by a number of abiotic and biotic stress factors, including pests and diseases (northern leaf blight, gray leaf spot, maize streak virus, rust and downy mildew) (Dagne et al., 2004).

Turcicum leaf blight (TLB), caused by the fungi Exserohilum turcicum is one of the widely distributed and economically very important diseases of maize production in the country. The infection appears during both off- and main-seasons, but it is more serious during the main-season in constantly wet and humid areas (Mosisa et al., 2012). According to Tewabech et al. (2012), the northern corn leaf blight (E. turcicum) has been reported to cause the highest grain yield loss of 50 and 16.4% loss of 1000 kernel weight on the susceptible cultivar.

The other leaf diseases including grey leaf spot (Cercospora zeae-maydis Tehon & Daniels) and common leaf rust (Puccinia sorghi Schr.) are also the most important infectious diseases of maize in the country. The disease incidence ranges from 95 to 100% in areas with constant moisture and high humidity and the yield loss can reach up to 70% (Tewabech et al., 2012).

To use inbred lines in hybrid breeding program, evaluation of inbred lines based on per se performance such as yield, disease tolerance and other character, and test cross performance, is the most common. For that reason, combining ability tests must be employed to choose individual inbred lines with potential for hybrid performance (Stoskopf et al., 1999). The diallel cross design proposed by Griffing (1956) is the first approach to testing combining ability, to know the type of gene action from the parent lines.

Diallel cross analysis also yields information on GCA and SCA of inbred lines. Combining ability analysis is one of the powerful tools in identifying the best combiners that may be used in crosses either to exploit heterosis or to accumulate productive genes. It also helps to understand the genetic architecture of various characters that enable the breeder to design effective breeding programs for future improvement of the existing materials (Sprague and Tatum, 1942). The combining ability could be used to provide information in the selection of elite inbred lines in order to establish the type of gene action, which controls the grey leaf spot resistance (Legesse et al., 2009).

The experiment was carried out in the main cropping season of 2015 at Jimma Agricultural Research Centre (JARC) located at Melko. It is located in south western part of Oromia Region, 358 km from Addis Ababa and 12 km from Jimma Town. The center is located at 7°40' N’ latitude and 36° E longitude at an altitude of 1753 m.a.s.l. The climate of the area is characterized as sub-humid with mean monthly maximum and minimum temperature of 26.3C and 11.6°C, respectively (IAR, 1997).

Ten selected inbred lines (Table 1) were crossed in a half diallel following Griffing’s Model 1, Method 4 (Griffing, 1956) and the resulting 45 F1 hybrids (excluding parents) were evaluated in a 5 × 9 alpha lattice design (Patterson and Williams, 1976) in three replications. Each treatment was planted in two rows of 5.1 m length with spacing of 0.75 m between rows and 0.30 m between plants within the rows. The inbred lines used for crossing were selected in terms of resistance to major diseases (Grey Leaf Spot, Turccum Leaf Blight and Commun Rust). List of inbred lines is shown in Table 1. 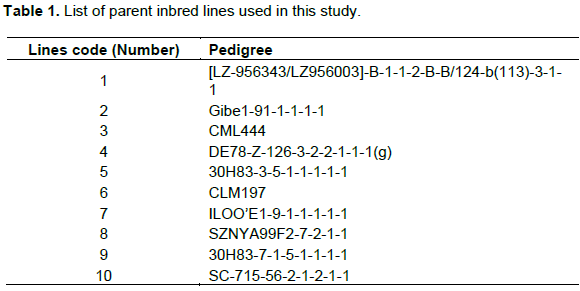 Ten plants were selected randomly in each plot and were labeled. These plants were measured individually and the mean value was recorded for the plot. The severity of major diseases such as grey leaf spot (GLS), TLB and common leaf rust (CR) was recorded on the whole plot using a 1 to 5 scale where 1=no symptoms, 2=moderate lesion below leaves subtending the ear, 3=heavy lesion development on and below the leaf subtending the ear with a few lesions above it, 4=severe lesion development on all but uppermost leaves may have few lesions and 5=all leaves dead. After the diseases were recorded; the severity of the disease was estimated using severity index formula (Wheeler, 1969):

The statistical analysis of the data was carried out using SAS computer software version 9.2 (SAS, 2008) software. The plot based mean values for grain yield and other agronomic traits were subjected to analysis of variance (ANOVA) as described in Gomez and Gomez (1984). Analysis of combining ability was carried out as described in Griffing (1956). Significances of general combining ability and specific combining ability effects of the hybrids were determined by t-test using standard errors of GCA and SCA effect. The significance of GCA and SCA effects were tested by dividing the corresponding GCA and SCA effect values by their respective standard error and comparing the obtained t value with tabular t-value at error degree of freedom (Hailegebrial et al., 2015). 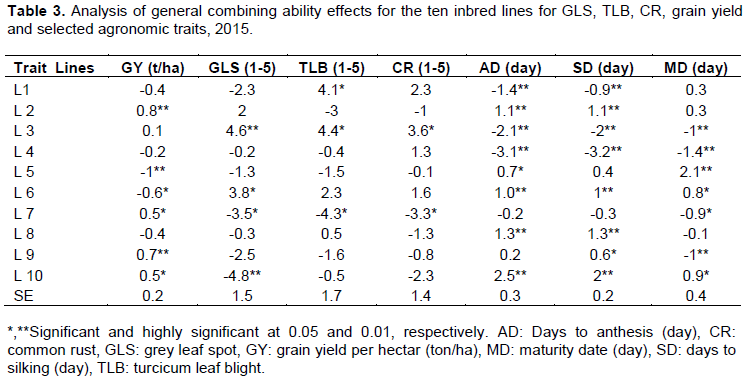 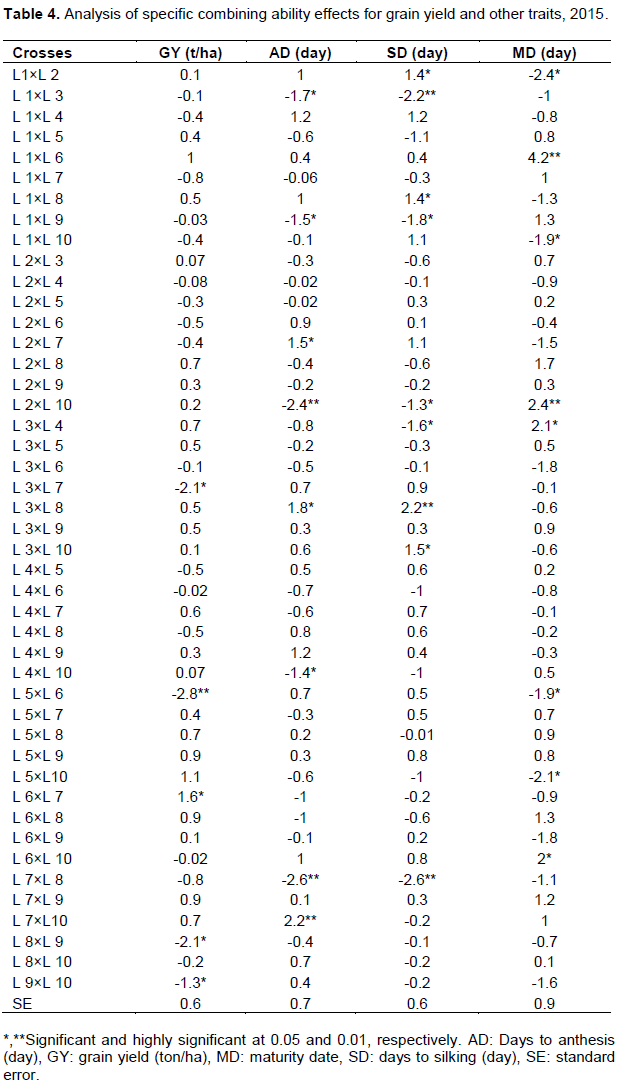 In this study, inheritance of grey leaf spot, turcicum leaf blight and common rust maize disease were controlled by additive type of gene action. This suggests the possibility of breeding through recurrent selection and backcrosses to incorporate candidate genes into susceptible parents. Of the ten inbred lines, only L7 and L10 showed negative and significant GCA effects for GLS disease, whereas only L7 manifested negative and significant GCA effect for TLB and CR disease, which is a desirable character to develop disease tolerant variety. This means that these parents had potential to cross with many other inbred lines to develop disease tolerant hybrids in breeding program.

Lines L2, L7, L9 and L10 had positive and significant GCA effects for grain yield, which mean that these parents could be used to improved grain yield in breeding programs. Among the F1 crosses, only L6 × L7showed positive and significant SCA effects for grain yield indicating its potential for use in future breeding program to develop hybrid variety. Most of the crosses also revealed positive SCA effects for grain yield; therefore, they might be used in hybrid variety development program. Generally, the results of this study could be exploited to develop disease tolerant and high yield varieties of maize particularly adapted to middle-altitude agro-ecology areas. The cross combinations with good performance in terms of disease resistant and grain yield were recommended for further evaluation in multi-location experiments to confirm their tolerance to diseases, yield superiority and stability.