Guava (Psidium guajava L.) is a shrub native to South America that produces fruit with great acceptance in the market for consumption in natura and production of various industrialized product lines (Osório et al., 2011). In recent years, the state of Espirito Santo has excelled in fruit, mainly at the family farming level, reaching a production of 7,656 tons, distributed in 306 ha of harvested area, according to the Brazilian Institute of Geography and Statistics (Ibge, 2015). The use of biosolids as organic fertilizer in agriculture is recognized as one of the most promising alternatives for final disposal of this waste (Pinto et al., 2014). Environmental practices with use sewage sludge, as nutrient source for plants, have been studied in the latest years in order to reduce the impact of their deposition and reduce production costs (Freitas et al., 2015).
Research shows that sewage sludge has a high potential for agricultural use in some plant species because of the chemical composition and high organic concentration. For the implementation of a productive orchard, the formation of good quality seedlings is necessary, which highlights the substrate, which should promote nutritional efficiency, be of low cost and provide suitable environmental conditions for the early growth of plants. Thus, the use of this residue in agriculture and even in seedling production can contribute to reducing environmental contamination by potentially toxic elements, reducing the impact to the environment (Kelessidis and Stasinakis, 2012; Trigueiro and Guerrini, 2014).
The seed germination depends on the your origin, highlighting soil nutrient availability, since it directly influences embryo formation, the genetics and chemical composition of the species as it was verified in several studies on nutritional management of the "mother-plant", mainly in the beginning of the reproductive stage when nutrients are translocated to the seeds, and the seed storage after its physiological maturation, which may compromise the physiological quality, which are factors considered as mandatory steps in a seed production program (Carvalho and Nakagawa, 2012; Silva et al., 2015). Despite the benefits of the application of sewage sludge in the physical and chemical characteristics of the soil and on plant growth, the accumulation of high concentrations of sludge elements in the soil is potentially toxic to plants (Singh and Agrawal, 2008; Nascimento et al., 2014).
When in contacts with plants, heavy metals may limit their growth and development by inhibiting physiological processes such as transpiration, respiration and photosynthesis (Nagajyoti et al., 2010; Taiz et al., 2015), making necessary the knowledge of the chemical characteristics of the sludge and the observation of the effect of different concentrations on soil and plants. Thus, sewage sludge must meet the necessary requirements for the concentration of heavy metals and pathogens, according to the legal norms which determine the limit of metal concentrations, the maximum cumulative loads permitted for use in agricultural soils, presence of pathogens and the species for which its use is recommended (Brasil, 2006).
Salvador et al. (2013), working with the waste use substrate to yield guava seedlings, observed that the treatment containing sewage sludge presented a negative effect on the growth of the plants. In addition to plant nutrition, light intensity exerts influence on plant growth, acting as a direct source of energy for vegetative growth (Taiz and Zeiger, 2013). According to Baliza et al. (2012), the light intensity promotes the formation of micro-climates, alters temperature and influences the soil water availability to the plants.The objective of this study was to analyze the emergence and early growth of guava plants (P. guajava L.) in substrate enriched with sewage sludge and under different light intensities.

All heavy metals in the sewage sludge were found at limits below the maximum established by Conama (2006); this biosolid was considered suitable for use in agriculture, according to Brazilian legislation.The use of sewage sludge influenced seedling emergence. The highest averages were found at concentrations of 90 t ha-1 under two screens and 317 t ha-1 under shade obtained with three screens, with a reduction after these concentrations (Figure 1). Similar behavior was observed for the emergence speed index. Thus, it appears that, similarly, the light intensity exerted influence on the emergence and emergence speed, with lower averages under full sun (Figure 1A and B). 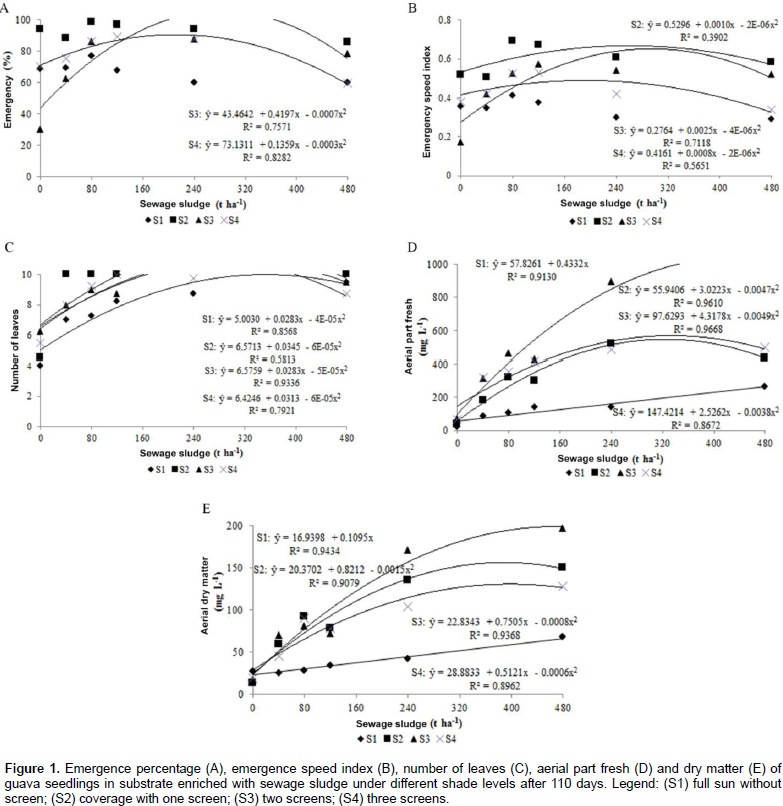 The highest average shoot fresh and dry weight and the highest number of leaves were observed when using substrates containing sewage sludge concentrations of 240 and 480 t ha-1, under shade with two screens. However, when maintained under full sun, there was pronounced reduction in these values (Figure 1C, D and E).
Considering the root dry mass (Figure 2A and B), there was greater accumulation using sewage sludge doses of 240 and 480 t ha-1. Regarding the chlorophyll contents, it was found that the seedlings grown in substrate with dosage of 480 t ha-1 of sewage sludge had higher averages of chlorophyll a, b and total. However, under different light intensities, the mean values found for the content were similar to each other (Figure 2C, D and E). 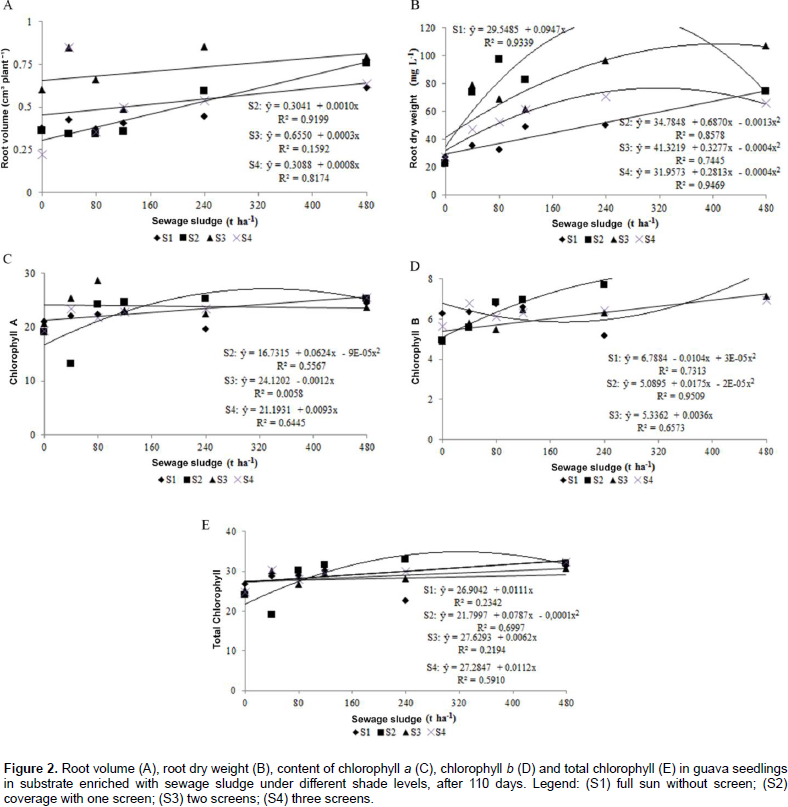 According to Taiz and Zeiger (2013), the photosynthetic properties of the leaves provide valuable information on plant adaptations to its luminous environment. Shading with two screens favored seedling emergence. The lowest index of emergence velocity of the pinhão-manso seedlings was observed in a shaded environment (Schock et al., 2014). However, Freitas et al. (2015) evaluating the emergence and growth of sweet passion fruit seedlings, found that the highest emergence and plant emergence speed were obtained under full sun. Light management directly affects the growth and assimilates partitioning in seedling production (Marana et al., 2015). Some species present varying behavior regarding their growth and chlorophyll content under different light intensities.
In shady environments, plants develop adaptation mechanisms that enable effective use of radiation, as seen in the present study; the shaded environment provides more chlorophyll per reaction center, with thinner leaves and larger area than plants grown under full sunlight. The use of sewage sludge influenced seedling emergence. The results are similar to those found for Lopes et al. (2005) and Freitas et al. (2015), where the sewage sludge has positive effect in initial growth seedling. These results corroborate those obtained by Caldeira et al. (2014), in a study developed with the application of sewage sludge in the formation of eucalyptus seedlings. Several studies demonstrate that the sewage sludge has the potential to provide nutrients, increasing productivity and dry matter production of crops such as castor bean (Backes et al., 2009) and sweet passion fruit (Freitas et al., 2015).
This fact is justified by the composition of the elements key to plants such as nitrogen, phosphorus and potassium, which are provided by the sewage sludge, whose analyses revealed values of 5505.00, 1,150.00, and 6.51 mg kg-1, respectively. The availability of mineral elements increases the CEC. According to Trannin et al. (2008), adding a sewage sludge dose exceeding 20 t ha-1 increased the organic matter and effective CEC of soil composed of sand, silt and clay, in the proportions of 80, 279, and 650 g kg-1, respectively. Considering growth under full sun or shade with two screens, the plants that grew in a shaded environment have more chlorophyll and these photosynthetic pigments are essential for plant growth, providing valuable information on their adaptation to a light environment (Taiz and Zeiger, 2013).
Similar results were observed by Hossain et al. (2015), who evaluated the effects of wastewater from sewage sludge biochar on growth, metal presence, and bioaccumulation of the cherry tomato, and found that treatment with the sludge had increased the number of fruits as well as their biomass. Studies verified that the use of sewage sludge in the soil provides nutrient supply and dynamics, as well as enhances microbial activity, according to Zhang et al. (2013). The fertilizer effect on the plants quality can be associated with available nutrients, which perform an important role in plant metabolism and help synthesize and accumulate carbohydrates (Taiz and Zeiger, 2013).
Different behavior was observed in Jatropha seedlings by Boechat et al. (2014), who found that the sewage sludge had no effect on root dry mass. However, several studies with the application of sewage sludge on the soil confirm the increased availability of phosphorus, organic matter, total nitrogen, and potassium (Chiaradia et al., 2009; Costa et al., 2014), providing further growth of the species. However, phosphorus is an essential nutrient in the development and becomes a significant problem due to its low mobility (Azevedo et al., 2004), the use of sewage sludge being considered as an alternative to maintenance and recycling of soil phosphorous.

The sewage sludge from the Espírito Santo Sanitation Company treatment plant (CESAN), in Joana D'arc, Vitória - ES, presents heavy metals levels below the limits established by CONAMA, and is considered suitable for use in agriculture. Production of guava seedlings (P. guajava L.) with sewage sludge should be done with dosages of 240 and 480 t ha-1. Shading with two screens is recommended for the production of guava plants (P. guajava L.).