The present research evaluated the redox ability of Cr6+ in the earthworm Eisenia foetida, and its effects on growth and survival. An assay was conducted with an increasing doses of K2Cr2O7 (0, 200, 400, 800, 1000, and 1200 mg K2Cr2O7 kg-1 substrate) applied to a vermicomposting system which was inoculated with 30 earthworms per chamber. Earthworm growth, estimated by weight, showed a quadratic response (p = 0.03) with the lowest estimated growth at a dose of 435 mg K2Cr2O7 kg-1. Chromium (Cr) concentration increments were positively associated to mortality in adults and cocoons (p < 0.01), and total Cr accumulation in earthworms (p < 0.01). The accumulation of chromium in worms, is an indicator of the capacity of worms to resist different doses of potassium dichromate and, the effect on accumulation of Cr (VI) in vermicomposting was higher (p = 0.11). The difference of potassium dichromate in worms could indicate the oxide reduction in E. fetidae.

Chromium (Cr) is an indicator of anthropogenic heavy metal pollution in water, and its presence in effluents is associated with discharges from steel, paint, dyes, ceramic, chromate, and photography industries, tanneries, and other human activities (Kimbrough et al., 1999). The trivalent form of Cr (III) is the most stable, but the hexavalent state Cr (VI) is highly toxic to living organisms (Nriagu and Pacyna, 1988). The stronger toxicity of Cr (VI) is associated with its ability to permeate biological membranes (Rudolf and Cervinka, 2005). The chromate ions (CrO42-) are considered more toxic than Cr (III) in the environment due to their mobility and strong oxidising capacity (Landrot, 2010). In contrast, Cr (VI) is rarely found in nature, and its  presence  in  the  environment  is linked to anthropogenic sources (Kimbrough et al., 1999).
The earthworm Eisenia foetida has been used in bioassays in processes of vermicomposting to assess the dynamics of specific toxins during degradation of organic matter (OECD, 2000). Complex metabolic processes involve changes in mobility and the availability of the elements is associated with microbial activity (Sizmur and Hodson, 2009) which occur inside and outside the earthworm during the vermicomposting process. Therefore, this experiment was designed to evaluate the use of vermicomposting as a method to reduce the toxicity of chromium in the environment. Changes in growth and survival of E. foetida were analysed, and chromium concentrations were measured in both earthworms and vermicompost substrate.
The Lerma River has been considered by Federal Government, one of the most contaminated catchment of Mexico (Comisión Nacional de Ecología, 1988/ Consejo Lerma-Chapala, 1991-1994). Turbio River drains residual waters from leather industry of Leon city flows into the Lerma River. The problems of chromium environmental passives in soils and sediments of this river catchment, is one of the most environmental problems concern in center region of Mexico. A high total Cr content in soils and sediments of Turbio river hydrological sub basin was found by Hernández-Silva et al. (2005), with 2196.0 ppm in sediments and in soils up of 300.0 ppm.

The glass chambers (0.30 x 0.20 x 0.15 m) were inoculated with adult E. foetida earthworms at the oviposition stage with a rate of 30 earthworms per bed, agree to data recorded in the OCDE, (1984). Rabbit faeces (1 kg) and fresh alfalfa (3 kg) was used as substrate in each chamber. The experiment lasted 35 days (Manyuchi and Phiri, 2013). The breeding chambers were kept in a greenhouse during the experiment. The vermicomposting pH, relative humidity, electrical conductivity, temperature and moisture were analyser and continuously monitored using a Hanna Instruments. HI 84502. The relation of C/N ratio was measure by ISO (Roht-Arriaza, 1995).
Treatments consisted of doses reference, 200, 400, 800, 1000, and 1200 mg K2Cr2O7 kg-1 substrate (Sigma-Aldrich Co.) with three replicates per  doses,  and  a  total  of  16  beds.  The  different  life stages of E. foetida were counted (cocoon, larva, juvenile, and adult) at day 35, and the length, diameter, and weight of adult earthworms were measured by Analytical Balances and Vernier Caliper. Samples of vermicomposting and earthworm homogenates were taken from each chamber to analyse the total hexavalent Cr concentrations.
The concentration of Cr (VI) was determined by photometry with biphenyl-carbazide in acid solution (Greenberg et al., 1992). Total Cr was measured by flame atomic absorption spectrometry (Perkin Elmer, Model HGA-600) with samples treated with acid digestion (Kotz et al., 1972). The vermicomposting samples were dried at 70°C and then the acid was digested (HNO3:HPO4 5:1) while the earthworm homogenate was weighed, frozen at -73°C and then freeze-dried. Results were analysed as a completely randomised block (chamber) with design testing linear and quadratic effects as a function of potassium dichromate concentration (Steel et al., 1997).

The length of the earthworms showed a quadratic response (p = 0.10; Table 1) with the greatest length (6.85 cm) estimated at 404 mg of potassium dichromate. According to Table 1, growth also showed quadratic response (p = 0.03) with the lowest weight (0.72 g) estimated at 435 mg dichromate. As chromium concentration increased, mortality of adults and cocoons increased (p < 0.01), but no effect was observed on larvae and juveniles. Although there was  higher mortality at a  higher doses of chromium, worms that survived doses of 1000 and 1200 mg K2Cr2O7 kg-1  showed a tendency (p = 0.12) to increase in size and weight . As the dose of potassium dichromate increased, total Cr accumulated in the earthworms also increased (p < 0.01) without changes in the vermicomposting process (Table 2). However, Cr (VI) is tended to accumulate in the vermicomposting (p = 0.11) without changes in the earthworms. The mean temperature in the breeding chambers was 23.9°C which is close to the recommended E. foetida (22°C), and is within the range for survival (20 to 31°C) (Khan et al., 2007). Another parameters measured during the experiment were (relative humidity 43%, electrical conductivity 1.28 dS m-1, C/N ratio 30.4 and pH 8.4) adequate for E. foetida growth and reproduction (Edwards and Lofty, 1972). 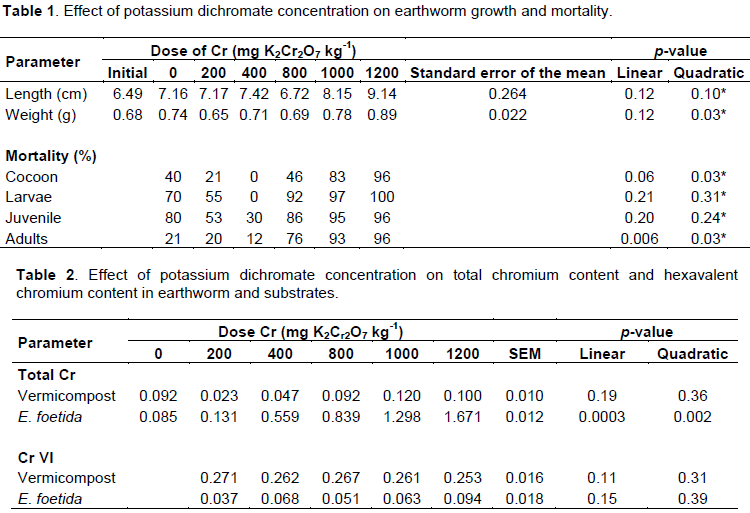 There are few studies on the effects of chromium on earthworm metabolism. However, considering that some metabolic pathways in earthworms are similar to those found in vertebrates (Laverack, 1963), chromium may affect DNA and protein synthesis in earthworms. Cr (VI) is reduced through short-lived Cr intermediates [Cr (V) and Cr (IV)] to ultimate stable trivalent Cr (III); this process generates reactive oxygen species which cause the DNA to damage and die (Aiyar et al., 1989). The hydroxyl radicals and hydrogen peroxide produced during the reduction of Cr (VI) could be responsible for negative effects on survival of some stages in the earthworm. Arakawa et al. (2012) demonstrated in vitro that Cr (III), Cr (VI) and Cr (V), the three major cellular Cr forms, induced bulky DNA adducts and oxidative DNA damage which contributed to mutagenesis of the p53 gene that leads to lung carcinogenesis.
Earthworms reach maturity between 5 and 7 cm length (Klok and De Ross, 1996), chromium concentrations did not affect this. The two stable forms of chromium are Cr (III) and Cr (VI). Chromium can be oxidised or reduced from one form to the other in the environment, depending on concentrations of the reactants, pH of the media, temperature, light intensity, and other entities involved in the reaction-surfaces/sorbents, complex agents, bacteria, oxidisers/reducers- (Rudolf and Cervinka, 2005). Results in Table 2 indicate that earthworms were able to reduce Cr (VI) to Cr (III), through the difference between Cr + and Cr6+. The greatest redox activity was found at a rate of 800 mg and higher doses affected survival of E. foetida. It is possible that some of the chromium redox reactions occur in the gastrointestinal tract where there is significant secretion of calcium carbonate (Laverack, 1963) and significant populations of bacteria with enzymatic activity (Kim et al., 2009).
Water is one of the reactants involved in many chromium oxidation reactions, along with Cr (III) and the oxidising agent. Trivalent chromium is not very mobile in soils since it is insoluble in most environmental conditions. However, Cr (VI) is much more mobile in the environment  because  of  its  high  saturation  index  and negative ionic form (Rudolf and Cervinka, 2005).
Sizmur and Hodson (2009) proposed that the impact of earthworms on soil metals, in terms of both metal mobility and availability, were related to changes in microbial populations, pH, dissolved organic carbon and metal speciation. Ali et al. (2015) mentioned that, earthworms have important interactions with microorganisms by stimulation of microbial populations. The presence of earthworms increases overall microbial biomass and activity and modifies the physiological profiles of microbial communities in pig manure (Aira et al., 2007).
Further studies of the changes occurring within the earthworm and its microbiota or microorganisms associated in the vermicompost are required. Bundy et al. (2002) studied the metabolism of xenobiotics by earthworms using antibiotics to inhibit gut microflora. They found that gut microflora did not influence metabolism of xenobiotics, and that some xenobiotics were not metabolised at all. This type of approach could be used in future studies to evaluate whether manipulation of Cr metabolic processes combined with other treatments in the substrate can reduce toxicity of chromium compounds.

Table 1 shows an ascendant increment of mortality in its different stages, from eggs to youthful, where the function of shell could act as a protective against the toxic. In the adult stage, worms show resistance in concentrations of 1000 and 1200 mg K2Cr2O7 kg-1 under the process of vermicomposting, increasing its length, even at 800 mg/Kg in comparison with larvae and youth. The adaptation to concentrations of the toxic could have a relation with worm metabolism as a proof of a high resistance to chromium accumulation of earthworm E. foetida.
The process of vermicomposting retains most amount of K2Cr2O7 kg-2 at the concentration of 400 mg K2Cr2O7 kg-2, surviving almost 100% as shown in Table 2. This table also shows the concentration of toxicant in earth-worm as total chromium.
Hexavalent chromium showed a difference, which can be inferred in the process of oxide reduction in the vermicomposting (Singh et al., 2012).