The oil palm (Elaeis guineensis Jacq.) is cultivated mainly for crude palm oil (CPO) which is extracted from the mesocarp of fruits. The quality of CPO is generally impaired due to high acidity, as a result of the activity of a lipase present in the mesocarp of the fruits at maturity. The objective of this study was to establish the genetic determinism of “palm oil acidity” (POA) from E. guineensis. Acidity was analyzed on CPO from the mesocarp of ripe fruits of some DELI parent palms used for the production of commercial seeds at CEREPAH Dibamba. Acidity analysis of 457 individuals from 11 progenies, issued from nine parents showed that, the segregation of forms with respect to this trait is compatible with a monohybridism with dominance. The dominant allele denoted that “Pa” determines high acidity while the recessive allele “pa” favours production of oil with low acidity.

The oil palm (Elaeis guineensis Jacq.) is a perennial crop that belongs to the family Arecaceae. It produces two types of oil: crude palm oil (CPO) extracted from the mesocarp and palm kernel oil (PKO) extracted from the seed (Sambantharmurthi et al., 2000). Since 2006, palm oil became the most consumed oil of plant origin (SoyStats, 2007), thanks to massive plantings in Indonesia and Malaysia and selection and improvement of the crop with the major objective of increasing oil yields (Yew et al., 2010). With an average world annual yield of 4 tons/ha/year (Jacquemard, 2011), the production of palm oil in 2015 was estimated at 62.1 million tons (SoyStats, 2016). This production represents  about  35% of world’s production of vegetable oils. The highest palm oil producing countries are Indonesia and Malaysia, who, respectively produced 28.4 and 19.2 million tons of oil in 2013; Cameroon contributed 0.23 million tons (Faostat, 2014).

CPO production in Cameroon is carried out by two main sectors: industrial and informal (smallholders). In industrial oil production which supplies about 70% of total national production, bunches are harvested and treated immediately. CPO produced in this way does not degrade easily and is thus of better dietary quality in terms of acidity. In the smallholder sector which supplies 30% of CPO, bunches are treated several days after  harvest.  In the course of this delay required to let fruits become easily detachable from the bunch, lipase activity in the fruit mesocarp accentuates with the hydrolysis of triglycerides, thus releasing free fatty acids. Oil produced as such has a high free fatty acid content and cannot be stored for long and is inappropriate for consumption (Anonymous, 2009). In the case in which the acidity ratio is high (above 5%), oil is classified as “acidic oil” (AFNOR, 1988). Below this threshold, oil is “non acidic”. Without prior refining, acidic palm oil is improper for human consumption (Anonymous, 2005). The fact that potentially acid oil cannot be stored for long enhances scarcity in the market during low production seasons, thus rendering the price of CPO very high.

Preliminary studies on palm oil acidity (POA) have shown that there is a wide variability for this trait (Ngando et al., 2008). In fact, oil acidity can vary from 0.75 to 41%. However, the genetic determinism of this trait is not yet clearly elucidated. The objective of this study was to precisely establish the genetic determinism of POA of oil from E. guineensis as a contribution to the genetic analysis of this trait, towards production and supply of commercial planting material susceptible to produce oil with low acidity.

The analysis of POA of all the progenies of the study served as a probe to elucidate the genetic determinism of this trait and to specify the genotype of the 09 parents for the concerned locus.

The evaluation of POA was done on oil extracted from mesocarp of matured fruits. Bunch maturity was determined by the presence of 2 to 6 loose fruits (Sambantharmurthi et al., 2000). A bunch per tree and sixteen trees at least were haphazardly chosen per progeny. Oil extraction was done using hexane with the Soxhlet method (Ngando et al., 2008). Determination of acidity was done by titration using a burette with a solution of KOH 0.1N in three replicates per sample according to AFNOR (1988). For this study, the threshold between high acidity and low acidity was fixed at 5%.

Results of POA per progeny were compared to the theoretical proportions derived from monohybridism with relationship to dominance using Chi square test (c2) at 5% significance threshold as in Yuste-Lisbona et al. (2010). 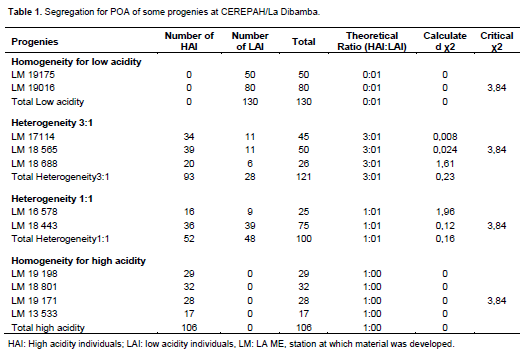 Progeny LM 18801 showed homogeneous  high  acidity oil for the 32 trees analyzed. The parent LM 3394 D being heterozygous, it can be concluded that the LM 3005 D parent is homozygous for the high oil acidity trait. This once more confirms the dominance of the high acidity phenotype. The LM 19171 progeny on its part also showed consistency for high oil acidity for the 28 analyzed trees. The parent LM 2357 D is homozygous for high acidity oil. From the earlier mentioned result, it can easily be concluded that the genotype of the parent LM 2356 D (unknown) does not influence the result of this progeny, and this again confirms the dominance of high oil acidity phenotype.

Genetic determinism of palm oil acidity highlighted in this study by Mendelian inheritance, indicates that it is a monogenic trait with dominance of the “higher oil acidity” form on the “lower oil acidity” form. This analysis is consistent with the results of a recent study based on a molecular approach on mesocarp lipase of oil palm fruits (Morcillo et al., 2013). The lipase enzyme is generally recognized as responsible for the acidification of palm oil (Desassis, 1957; Ngando et al., 2006). The molecular approach indeed shows that within mesocarp proteins of ripe oil palm fruits, there is a unique protein (55-kDa) with lipase properties. This protein is present in the mesocarp of individuals producing oil with high acidity and absent among those which produce the oil with low acidity (Morcillo et al., 2013). The uniqueness of the protein clearly refers to the monogenic trait in Mendelian inheritance. Moreover, the production of the protein with lipase activity in hybrid justifies the dominance demonstrated during this study.

Results obtained from this study have led to the suggestion of a simple and clear model for genetic determinism of palm oil acidity. This trait is considered as monogenic and “high oil acidity” is dominant over “low acidity”.   Since   palm   oil   acidity   is   expressed  as   a percentage of palmitic acid, it is proposed that the allele responsible for high oil acidity be named «Pa» and that favoring production of oil with low acidity «pa», in order to facilitate interpretation of results obtained (Table 2).

Plant material used in this study was from DELI «Dura» families. Given that cultivated oil palm varieties are obtained from crosses between DELI «Dura» female individuals and LA ME «Pisifera» males, it is necessary to further search for and identify recessive homozygous individuals for low acidity in the LA ME population. Thence, it will be possible and easy to produce hybrids with low acidity from homozygous parents.

Definitely, in all of the results obtained, offspring are homogeneous with high acidity phenotype if at least one parent bears this trait. It is homogeneous with low acidity if both parents have a genotype producing low acidic oil. Heterogeneous offspring are obtained if and only if both parents are heterozygous. In addition, results obtained from self-pollination progenies were consistent with those from intercrossing.

These results could lead to the conclusion that: the rate of oil acidity in palm oil is controlled by a major locus which within the analyzed population presents two alleles. This study opens up the possibility for breeders to select “low acidity” genitors from which improved oil palm seeds can be produced and supplied especially to smallholders for the production of better quality palm oil in terms of acidity.