The use of molecular markers in turtles: A technological prospecting

The application of molecular markers stands out in studies on the genetic variability of animal and plant species. This tool contributes to studies on the history of some chelonian species, since it takes into consideration their longevity and the endangerment they are often exposed to. The aim of the current study is to perform a quantitative research to document and analyze the development of technological competencies based on the number of patents and scientific articles on the use of molecular markers in studies comprising chelonians. It was done using scientific articles from databases such as Science Direct, Web of Science, SCOPUS and CAPES thesis and dissertation bank, as well as patents recorded in databases such as INPI, WIPO and EPO. The results showed a larger number of scientific articles than patents. There was just one patent registration on the use of molecular markers in turtles; it was deposited in 2011 by a group of Chinese researchers. These indicators show an important scientific gap on this subject, which may be the basis of new studies aimed at better understanding and protecting this animal group.

The expansion of human activities worldwide has caused serious damages to the environment, namely: frag-mentation of habitats, population decline and extinction of animal species. Many studies have been carried out in response to this “environmental crisis” as a way to gather information that can support the application and maintenance of effective  measures  aimed  at  protecting
and managing wildlife resources.
Among the vertebrates, there is great concern about the conservation of turtles. According to Pough et al. (2008), in addition to the longevity observed in most species, these animals have low reproductive capacity to enable rapid population growth, given their low growth rates  and  the  long  period  they  need  to  reach  sexual maturity and, thus, perpetuate the species. Data from the International Union for Conservation of Nature (IUCN) showed that their vulnerability to extinction endangerment rate reached 58.8%; this rate is much higher than that found in birds (13%), mammals (25%) and amphibians (41%). Páez et al. (2012) reported that more than 50% of the 322 turtle species that reached the 21st century are endangered. This situation becomes more severe if one takes into consideration, the continental (terrestrial and freshwater) species alone, which show 67% risk of extinction. According to Fantin (2008), such vulnerability results from anthropic activities, which devastate the natural habitat of these animals through predatory hunting during the breeding season and through the destruction of eggs.
The entire chelonian populations are endangered in some areas; almost all species in Southeastern Asia are endangered due to political and economic changes (Van Dijk et al., 2000). The situation is equally disturbing in China due to the use of these animals for dietary purposes and in several disease treatments (Pough et al., 2008).
Brazil holds 36 turtle species in several terrestrial and aquatic ecosystems. Five (5) out of this total are marine, 2 are terrestrial (red-footed tortoises) and 29 are freshwater species (Bérnils and Costa, 2012). Of the 20 Brazilian reptile species considered endangered or extinct, one in five chelonian species are endangered (Martins and Molina, 2008).
According to Bondioli (2009), it is essential to understand several aspects concerning endangered species such as taxonomic status, distribution area, as well as demographic and ecological issues. All these factors are crucial to develop species conservation proposals. Accordingly, Frankham et al. (2002) highlighted that low population density, in association with rapid population decline, contributes to faster allele loss, which hinders genetic variability and leads to deleterious allele fixation, adaptive potential reduction, and increased extinction likelihood. Cornuet and Luikart (1996) pointed out that identifying populations whose size was abruptly reduced is extremely important because these populations are more susceptible to extinction.
There has been significant advance in molecular genetics techniques in recent years, due to the use of molecular markers in different knowledge fields. These markers are useful and safe tools that can provide an accurate diagnosis. Comparative studies of the genetic variation described through molecular markers, as well as regional morphometric patterns, have focused on several wild species (Weksler et al., 2001; Vilela et al., 2010; Ross and Bouzat, 2014). The following molecular markers stand out among those used to detect genetic variability in DNA sequences: Restriction fragment length polymorphism (RFLP), random amplified polymorphic DNA (RAPD), single nucleotide polymorphism (SNP), mitochondrial DNA (mt DNA) and microsatellites or  short tandem repeats (STR) (Santos, 2011). They stand out because they show applicability in the development of different genetic-resource conservation strategies, since they provide complementary ecological and morphological data.
Molecular markers provide a better understanding of the genetic diversity and demographic relations of faunal species in order to set conservation strategies. The aim of the current study was to document scientific information found in Brazilian, American and European databases by analyzing the development of technological competencies translated through the number of thesis, dissertations, articles and patents addressing the use of molecular markers in turtles.

The herein presented manuscript is an exploratory documentary study of quantitative approach on technological prospecting, and it was carried out from October to November 2015. The thesis and dissertation bank belonging to the Coordination for the Improvement of Higher Education Personnel (CAPES – Coordenação de Aperfeiçoamento de Pessoal de Nível Superior) was used to search for information, whereas databases such as Science Direct, Web of Science and SCOPUS were used to search for scientific articles. Databases belonging to institutions such as the Brazilian National Institute of Industrial Property (INPI - Instituto Nacional de Propriedade Industrial), the European Patent Office (EPO) and the World Intellectual Property Organization (WIPO) were used to obtain information on the content of patents.
The keywords used in the search were marcador molecular (molecular marker), tartaruga (turtle), quelônio (chelonian), marcador molecular e tartaruga (molecular* and marker* and turtle*).

Thesis, dissertations and scientific articles
Table 1 shows the number of thesis and dissertations deposited at CAPES database. The substantial number of studies on molecular markers may be attributed to the progress in molecular genetics and the use of its tools, as well as its several applications. These applications extend from animal  and  plant  breeding  to  phylogenetic
and population studies, in addition to its use in disease detection. According to Rosa and Paiva (2009), such progress generated knowledge and increased the species identification capacity beyond the characterization of biodiversity in several Brazilian ecosystems and the assessment of inter- and intra-population genetic variability in wild and domestic animals of economic importance. It is shown that the descriptors resulted in a robust number of thesis and dissertations when they were individually used in the searches; however, they did not present results when they were used in association, which may indicate limitation in the use of these genetic techniques. 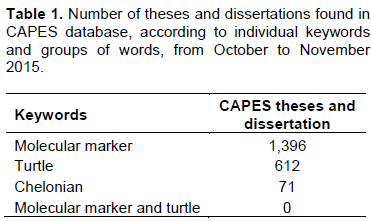 Table 2 shows the distribution of scientific articles indexed in international databases. Considerable number of scientific articles on “molecular markers” was shown, which overall encompassed studies on animals and plants, thus confirming the applicability of these markers to different research lines. However, this number significantly decreased when keywords such as “molecular markers and turtles/chelonians” were used together. Such results may be explained by the fact that many species were not yet studied through these techniques, which explained the small number of biological data. According to Rodrigues (2002), Brazil is an atypical country when it comes to species con-servation, despite its size and biodiversity in comparison with the United States, Russia, Australia, China and Canada. This is because, unlike these countries, Brazil has few resources to conserve such species.

Patents
Patent  is a temporary ownership title over an invention or utility model; this title is granted by the State to inventors or authors, or to other natural or legal persons having rights over creations (INPI, 2013). Each country has its own legislation and according to Article 8 of Brazilian Law 9.279/96, “inventions meeting requirements such as novelty, inventive activity and industrial application are patentable” (Brasil, 1996).
Table 3 shows the distribution of patent filing applications based on the analysis applied to the keywords and their combinations in databases such as INPI, EPO and WIPO. A robust number of patents were found in the databases as mentioned above when the keyword “molecular marker” was used, fact that confirmed that this tool is of scientific interest. However, only 13 patents were found in the field “title” and eight were found in the field “abstract” when the keyword “turtle” was used in the INPI database. It is noteworthy that only one  patent was found in all databases when the keyword “chelonian” was used, whereas no result was found when the keywords were used in association.

The analysis done in the four databases showed that turtles constitute a group of scientific interest, due to a reasonable number of patent applications. However, the refinement of the search using the association of words “molecular markers for/in turtles” significantly reduced the number of patent filings: only two were found in EPO and four were found in WIPO, which showed a gap in the registration of patents concerning this animal group. This issue is partly derived from the patenting legislation, which differs from country to country. Patents on living things and biological materials remain forbidden in Brazil. Bill n. 4961/2005, which is related to the access to genetic heritage, is in progress in the National Congress. In   addition,   Brazil     has    little   participation    in    the  biotechnology segment. According to the World Intellectual Property Organization’s Annual Report to the United Nations (UN) in 2014, Brazil occupies the penultimate position in the ranking of valid patents. According to statistical data, the United States remains the country that mostly focuses on international patent registration. It is followed by China, whereas emerging states need to strongly encourage technological innovation (Freire, 2016).
Patents associated with terms “molecular marker” and “turtle” in EPO and WIPO
Table 3 shows only 2 patents in the European database (EPO) and 4 in WIPO when the combinations between molecular marker(s) and turtle(s) or between molecular and marker* and turtle* were applied. Figure 1 shows the annual evolution of patent filing. It is  shown that  the  first patent application occurred in 2009, whereas the other applications occurred in 2011. There was a single patent registration concerning conservation actions towards the turtle species, Chinemys reevesii (CN 102146382 A). The invention was based on providing microsatellite-type molecular markers with availability for 10 new informative loci and loci-amplification methods. According to the inventors, the invention could be applied to studies of the genetic diversity of different geographic populations, as well as paternity identification studies. 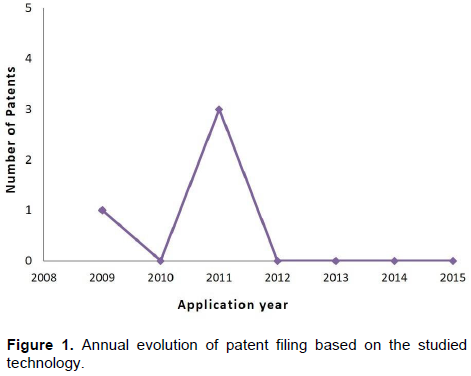 Serafini et al. (2011) highlighted the International Patent Classification (IPC) as a valuable tool to speed up searches on patent databases. This classification (Patentes on Line, 2015) distributes patents according to the application. The documents found in the herein conducted search were analyzed according to the IPC (Figure 2); 2 patents referred to section C12N (C12N 15/10 and C12N 15/11) and the other 2, to section C01B. 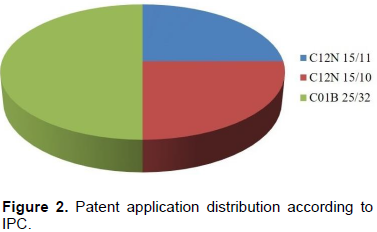 Technological prospecting data showed a significant number of scientific articles on the use of molecular markers to study animal and plant species. However, there was disproportion between the number of studies and patents specifically referring to chelonians; a single patent regarding the species, C.  reevesii  was  deposited in 2011 by Chinese researchers. It is hoped that data obtained in the current study can be used as reference base for new research, and they may encourage the use of molecular tools to help in better understanding and protection of turtle species.