The monogenean Microcotyle sp. was isolated from common dentex in the Sea of Crete, the part of the Mediterranean Sea. The 28S rRNA gene of Microcotyle sp. was amplified by polymerase chain reaction (PCR). The PCR product was sequenced and compared with other 28S rRNA sequences of Monogenea. Phylogenetic analyses were performed with neighbour-joining (NJ), minimum evolution (ME), maximum likelihood (ML) and maximum parsimony (MP) method. The result of analysis shows that NJ and ME method presented the same topology; ML method led to a similar but slightly different topology from NJ or ME method; MP method resulted in a totally different topology from the other methods. Also, Microcotyle sp. isolated in this study was proven to be closest to Microcotylidae gen. sp. MAF-2012 and Bivagina pagrosomi.

Mediterranean mariculture production has focused on two species: gilthead seabream (Sparus aurata L.) and European sea bass (Dicentrarchus labrax L.) (Akyol and Ertosluk, 2010). In the meantime, the common dentex (Dentex dentex L.) is considered as one of the most attractive candidates for aquaculture due to its high commercial value (Loir et al., 2001; Chemmam-Abdelkader et al., 2007). Also, it is known that it shows easy reproduction in captivity and high growth rate (Loir et al., 2001; Tomás et al., 2009).
There are still several constraints for the future development of Mediterranean mariculture, such as disease problems caused by bacterial, viral and parasitic infections (Rodgers and Furones, 1998). Monogeneans have been considered as a factor limiting aquaculture productivity as it frequently causes mixed infections with other parasites and secondary bacterial infections (Cruz e Silva et al., 1997; Antonelli et al., 2010). Microcotyle sp. belongs to the Order Monogenea, Suborder Polyopisthocotylea, which has caused high mortality (Sanz, 1992). The symptoms of microcotyle sp. infections are anemia and asphyxia due to over production of mucus (Sanz, 1992). There has been a report about the loss related to Microcotyle sp. in aquaculture (Paperna, 1960). Microcotyle sp. infections have been reported from several countries such as the Americas, Asia, and Israel in several fish species including rabbitfish (Siganus luridus and Siganus virulatus), gilthead seabream (Sparus aurata) and seabass (Dicentrarchus labrax) (Paperna, 1983; Sanz, 1992). To date, the importance of molecular analysis has been increased for the rapid and efficient phylogenetic study of parasite. The partial sequences of the 28S rRNA gene have been used for the phylogenetic study of monogeneans (Mollaret et al., 2000; Jovelin and Justine, 2001). The aim of the present study was to isolate Microcotyle sp. (Monogenea) from common dentex, sequence the 28S rRNA gene of isolate, compare it with the 28S rRNA genes of other Monogenea, and investigate the phylogenetic characteristics.

From March to May 2015, a total of 10 common dentex were purchased from fishermen at Heraklion Bay (35°20′N, 25°08′E), Crete, Greece in Mediterranean Sea. Fish were kept in plastic bags with ice and transferred to the diagnostic facility within 1 h. Skin, fins and gills of the fish were examined immediately after arrival. For the examination of parasites, gill arches were removed and observed using a stereo microscope. More than 50 parasites were observed from infected fish and preserved in 2.5% glutaraldehyde for further anaylsis.
DNA extraction was conducted using the DNeasy® Blood & Tissue Kit (QIAGEN) according to the manufacturer’s instruction. The 28S rRNA gene was amplified by PCR using C1/D2 primer pair as previously reported (Chisholm et al., 2001). The automated sequencing was carried out using the Automatic Sequencer 3730xl DNA analyzer (Applied Biosystems). Sequence identities were determined with the BLAST search. The 28S rRNA sequences of Monogenea which were used in the current study were downloaded from the GenBank and used for phylogenetic analyses (Table 1). These sequences were aligned with ClustalW and analysed with the MEGA6 (Tamura et al., 2013). Phylogenetic analyses were conducted with: (1) neighbour-joining (NJ) method (Saitou and Nei, 1987); (2) minimum evolution (ME) method (Whittington et al., 2004); (3) maximum likelihood (ML) method (Hasegawa et al., 1985); and (4) maximum parsimony (MP) method (Swofford and Olsen, 1990). Bootstrap values were calculated for each method, with 1,000 replicates. Merizocotyle icopae, Troglocephalus rhinobatidis and Neoheterocotyle rhinobatidis were used as out-group.

Parasites (2-6 mm in length) attaching to the gills of fish were observed in the central part of gill filaments (data not shown). In the current study, the prevalence of infection of Microcotyle sp. was 60% (sixinfected fish out of 10 in total), which is similar to the result reported by González et al. (2004). González et al. (2004) previously reported the incidence of gill parasites of common dentex from Mediterranean Sea. In the previous study, Microcotyle erythrini was isolated from 57% of the examined common dentex (González et al., 2004). Also, for the infection with gill monogenean parasite, Microcotyle sebastis has been considered as a problem associated with rockfish (Sebastes schlegeli) aquacultured in Korea (Kim and Choi, 1998). According to the previous report (Kim and Choi, 1998), high cumulative mortality of juvenile rockfish related to M. sebastis infection had been observed in many farms. Even higher mortality caused by Microcotyle sp. infection was observed in the aquarium fish; the mortality of 90% was reported (Mellen, 1928).
Phylogenetic analyses based on morphological and molecular genetic data have played an important role in parasitological studies. Although the value of morphological analysis cannot be underestimated, molecular analysis has increased its importance for phylogenetic study as a more rapid, efficient, and cost-effective method due to progress in sequencing techniques (Perkins et al., 2010). There have been many methods developed for the construction of phylogenetic tree, but there is no systematically better method than the others and the result can be improved by combining methods (Guindon and Gascuel, 2003). Although NJ method is known to be better than MP method, it may give the expected result as long as a proper distance measure is used, which depends on the situation encountered (Jin and Nei, 1990).
Choi et al. (2009) carried out a molecular phylogenetic analysis for the evolutionary study of an annexin gene from Microcotyle sebastis in their previous report; phylogenetic trees were constructed by the neighbour-joining (NJ) method and it showed the result of evolutionary analysis between the annexin gene of M. sebastis and the annexin genes already known. In the current study, the 28S rRNA sequence of Microcotyle sp. (989 bp in length) was deposited in GenBank under the accession number KT191025. The sequence obtained showed 96-97% nucleotide similarity with Microcotylidae, such as Bivagina pagrosomi, Microcotyle arripis, Microcotyle erythrinii, and Microcotyle sebastis (Table 1). Phylogenetic analyses were based on the 28S rRNA sequence as previously reported (Mollaret et al., 2000; Jovelin and Justine, 2001). 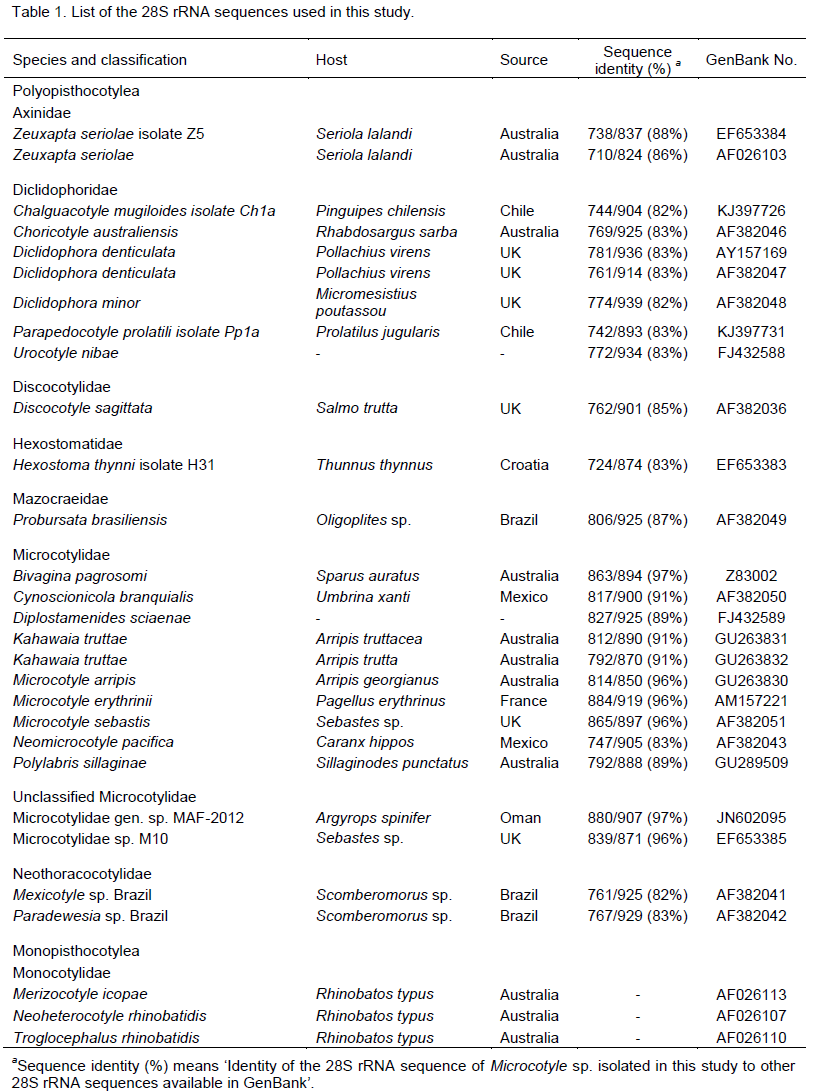 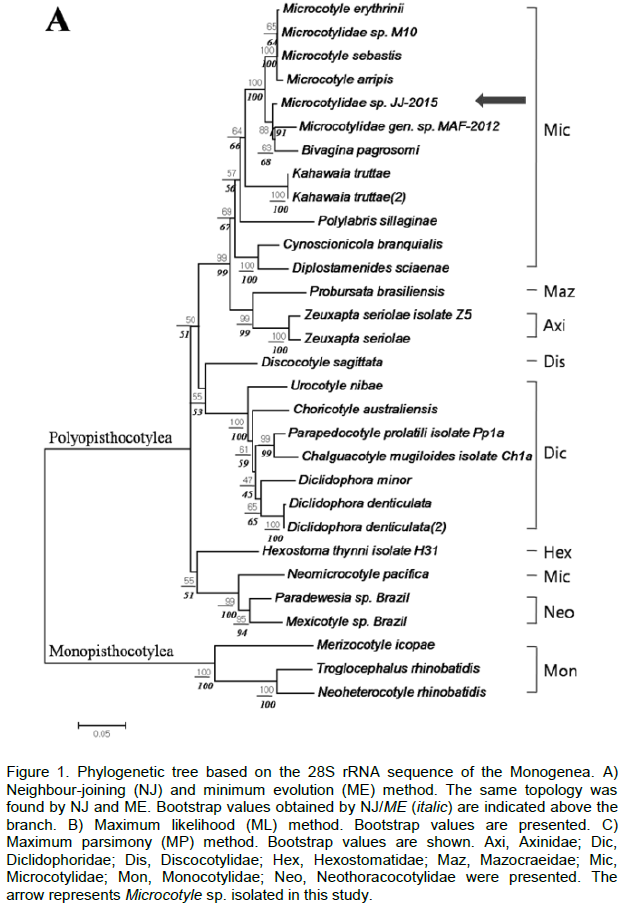 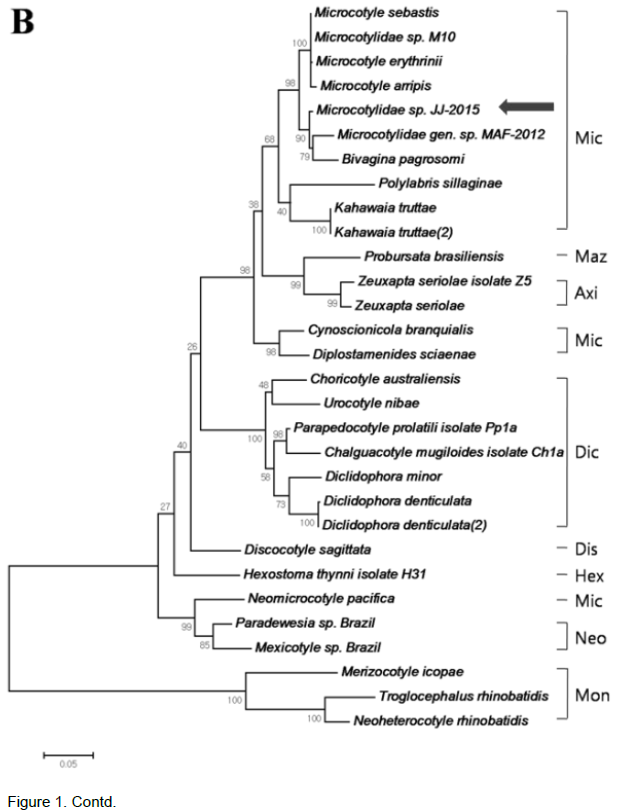 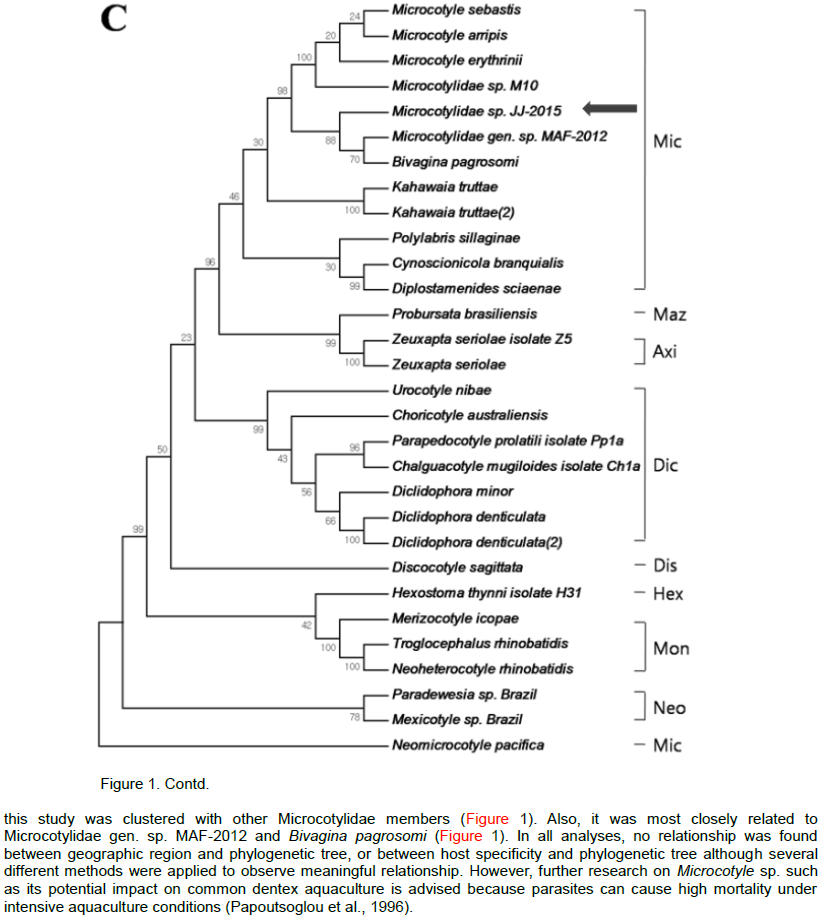 this study was clustered with other Microcotylidae members (Figure 1). Also, it was most closely related to Microcotylidae gen. sp. MAF-2012 and Bivagina pagrosomi (Figure 1). In all analyses, no relationship was found between geographic region and phylogenetic tree, or between host specificity and phylogenetic tree although several different methods were applied to observe meaningful relationship. However, further research on Microcotyle sp. such as its potential impact on common dentex aquaculture is advised because parasites can cause high mortality under intensive aquaculture conditions (Papoutsoglou et al., 1996).