The aim of this study was to develop Greek yogurt flavored with pequi and to assess its physicochemical and microbiological characteristics, as well as its shelf-life, sensory acceptance and purchase intent. Four yogurt formulations were prepared: no addition of Pequi pulp (control - treatment 1), 1% pequi pulp (treatment 2) 2% pequi pulp (treatment 3) and 3% pequi pulp (treatment 4). The levels of fat, moisture and ash showed no difference between formulations. For protein, Greek style yogurt with 2% pequi pulp showed the highest values. Clear yellowish color was observed in yogurts, with a tendency to red and green. All yogurt samples prepared with up to 22 days of storage showed pH and acidity values in accordance with Brazilian legislation. Microbiologically, yogurts were stable and with satisfactory sanitary conditions for consumption. Greek style yogurt with type 2% pequi pulp showed the greatest acceptance by consumers. In conclusion, Greek style yogurt flavored with pequi is a good food alternative, because in addition to market innovation, it has high nutritional value and good acceptance by consumers.

Consumers have shown preferences for healthy and innovative foods due to health concerns. The quality of food products and their influence on human nutrition and health deserve a prominent place in the scientific community (Lazaro Filho et al., 2007).

In this context, yogurt stands out, which is a milk derivative, obtained by fermentation produced by symbiotic cultures such as Lactobacillus delbrueckii subsp. Bulgaricus and Streptococcus thermophilus (Leal et al., 2013). Machado et al. (2012) reported that the consumption of yogurt has increased and attributed this to benefits such as facilitated absorption of calcium, phosphorus, iron and the action of proteins and digestive enzymes.

Greek style yogurt is a thick, creamy and semi-solid product due to the high concentration of total solids obtained by coagulation and decrease of milk pH added of soluble solids and other food substances and submitted to acid fermentation through the action of specific microorganisms for periods of time longer than traditional yogurts.

The sensory characteristics of yogurts may be improved by adding flavorings and fruit pulps, providing a distinctive combination of lactic acid flavor and fruit flavor (Miguel et al., 2010). Fruits from the cerrado region of Brazil have become an option for adding value to yogurts due to their high nutritional value and sensory attractives such as, color, flavor and unique and intense aroma (Almeida et al., 2008).

Although the consumption of fruits from the cerrado region has grown substantially in recent times, they are still not commercially exploited, either by lack of knowledge or lack of incentives for their commer-cialization and market consolidation. Their use in cooking has aroused interest in many segments of society such as farmers, industry, research institutions and health and food agencies (Oliveira et al., 2008).

Caryocar Brasiliense, Cambess is a fruit of high nutritional value, rich in vitamins A, E, C, fatty acids, phosphorus, potassium and magnesium, which are substances responsible for the proper functioning of the body (Sousa et al., 2012).

The golden yellow pulp of pequi provides an attractive color in Brazilian cuisine, enjoyed by much of the population mainly due to the peculiarities of the exotic flavor, and characteristic strong aroma present in the fruit.

The production of concentrated yogurt using fruits from the cerrado region is still inexistent and can add greater value to the final product, allowing an alternative income to producers, also contributing to higher consumption of fruits from this region.

The aim of this study was to develop Greek style yogurt flavored with pequi and to assess its physicochemical and microbiological characteristics, as well as its shelf-life, sensory acceptability and purchase intent.

This project was submitted to the Ethics Research Committee of the Federal Institute of Education, Science and Technology of Goiás, Brazil and approved under Protocol no. 020/2013.

Refrigerated bovine milk, 10% of powdered whole milk per 1000 mL, 12% of sucrose per 1000 mL, starter cultures and cooked pequi pulp (Figure 1) were used for the development of Greek style yogurt  (Figure   1).  Refrigerated    milk   was   obtained    from   the Department of Livestock, Goiás Federal Institute - Rio Verde Campus - GO, with 2.91% protein, 3.47% fat, 3.99% lactose, 11.35%  total dryextract, 7.88% nonfat dryextract, 599 thousands CS/mL somatic cell countand and 781 thousands CFU/mL total bacterial count. Due to the fact that processing involves heat treatment step (pasteurization), which aims to eliminate pathogenic and spoilage microorganisms, it was possible to use milk without any risk to the final product. The fulfillment of this step minimizes the exposure of consumers to high risks of contamination by a variety of pathogenic microorganisms present in the raw material (Fai et al., 2009). 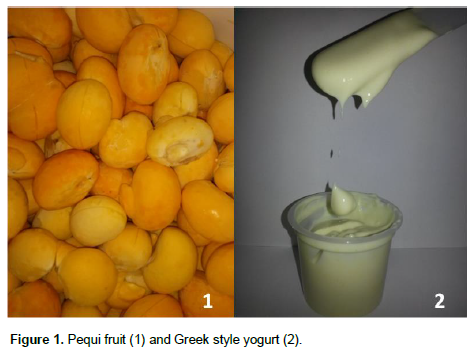 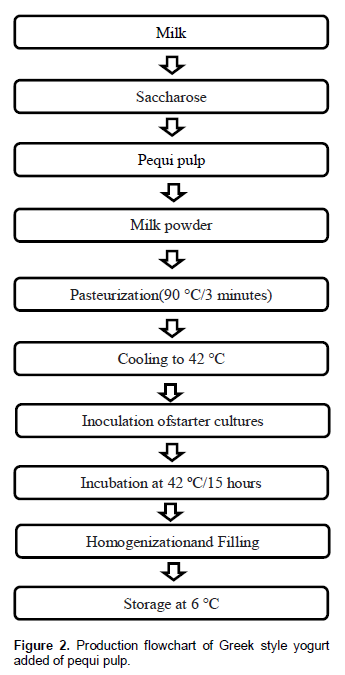 Refrigerated milk was added to sucrose, powdered milk and pequi pulp (treatments 2, 3 and 4), homogenized and submitted to pasteurization at temperature of 90°C for 3 min. Then, it was then cooled to 42°C and added to starter culture, followed by homogenization. After the addition of the culture, the milk was kept at 42°C in BOD (refrigerated incubator) for 15 consecutive hours. After the incubation period, the curd was transferred to polyethylene pots (250 mL) and stored under refrigeration at temperature of 6°C for eight days for analyses.

Pequi pulp was submitted to the following analyses: moisture, pH, titratable acidity, lipids, protein, ash and soluble solids content, which were determined in accordance with the Association of Official Agricultural Chemists (AOAC, 2000) and analysis of color in colorimeter (ColorQuest II, Hunter Lab Reston, Canada) and the results were expressed in L *, a * and b *, where, L * values ( brightness) can vary from black (0) to white (100), chroma a * from green (-60) to red (+ 60), and chroma b * from blue (-60) to yellow (+60), as reported by Paucar - Menacho et al. (2008).

Greek style yogurt flavored with pequi was analyzed for moisture, protein, ash, and fat by AOAC (2000) and color on the eighth day of storage.

The shelf-life of each yogurt formulation was evaluated in the first day and after 8, 15, 22 and 29 days of storage regarding analysis of pH using a digital potentiometer (Quimis) previously calibrated with pH 4.0 and 7.0 buffer. Titratable acidity was determined according to AOAC (2000) and expressed as percentage (%) of lactic acid. All analyses were performed in triplicate.

Microbiological analyses were performed on pequi pulp and Greek style yogurt flavored with pequi on the fifth day of storage in order to verify the quality of yogurts using plating technique for the count of molds and yeasts, as well as mesophilic, psychrotrophic and coliforms at 30°C, according to methodology recommended by Silva and Junqueira (2001).

The samples were evaluated by 78 untrained panelists, consumers or not of yogurt and within the age group of 18-53 years. Acceptance testing was carried out in individual booths.

The four samples were served in 50 mL disposable cups previously coded with random three-digit numbers and presented under ambient light. The panelists evaluated the samples using a 5-point hedonic scale, ranging from 1 (dislike) to 5 (liked), indicating how much they liked or disliked samples of Greek style yogurt flavored with pequi.

To better understand the likely consumers of the yogurt developed, panelists were requested to answer a structured questionnaire on the purchase intention of Greek style yogurt with pequi.

The results of physicochemical analyses and acceptance test of Greek style yoghurt were obtained using a completely randomized design (CRD), in triplicate with three replicates for all analyses and submitted to analysis of variance (ANOVA) and Tukey's test with significance level of 5%  using the Sisvar Software (Ferreira, 2003) .

For the results of physicochemical analyses of raw materials (milk and cooked pequi pulp), descriptive statistical analysis was used.

The results of the shelf- life and purchase intent study were submitted to analysis of variance and regression through Microsoft Excel 2010.

The results of physicochemical analyses of Greek style yogurt flavored with pequi are shown in Table 1. As shown in Table 1, the protein values of yogurts ranged from 5.34 to 6.14%. Greek style yogurt with 2% pequi pulp (treatment 3) had higher protein content (6.14%), significantly differing (p ≤ 0.05) from Treatment 4 (3% pequi pulp). The protein contents in this study were higher than those obtained by Medeiros et al. (2009) in different jackfruit yogurts (4.83 and 4.97%) but in accordance with Brazilian legislation, which establishes minimum protein contents in yogurt of 2.90% (Brasil, 2000).

Similar fat and protein results were observed by Özer and Robinson (1999), who studied the behavior of starter cultures in concentrated yoghurt (Labneh) produced using different techniques. In general, Greek style yogurts showed clear yellowish color (high brightness values and positive b * component), with a tendency to red (slightly positive a * component) in treatments 3 and 4 (2% and 3% pequi pulp) and green (negative a * component) in treatments 1 and 2 (0 and 1% pequi pulp). Higher L * value was observed in Treatment 1 (0% pequi pulp) and reduced brightness values (L *) with the addition of different pequi pulp concentrations.

The shelf- life results of Greek style yogurt flavored with pequi are shown in Figures 3 and 4. The titratable acidity (Figure 2) of Greek style yogurt flavored with pequi ranged from 1.31 to 1.99% lactic acid. The acidity of yogurts increased during storage, regardless of the addition of Pequi pulp. The increased acidity is related to the continued fermentation process by lactic acid bacteria during the storage period as the result of post-acidifi-cation of products with lactic acid production (Aportela - palacios et al., 2005), in which lactose is also converted into lactic acid (Pereira et al., 2012). 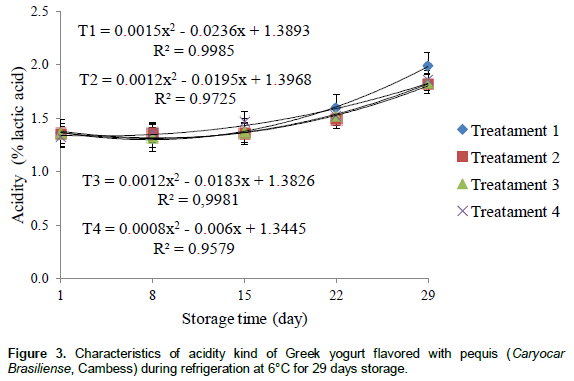 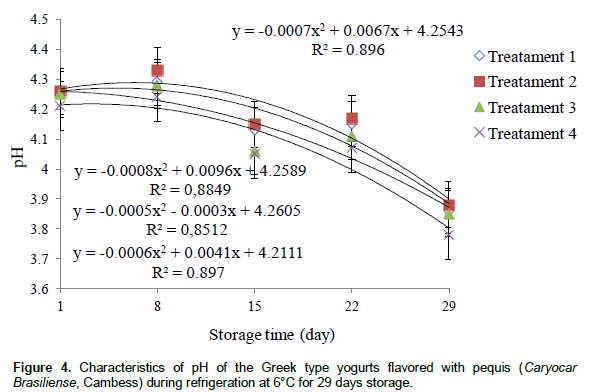 Yogurt cultures such as L. bulgaricus and S. thermophilus remain active even at refrigeration temperature and are able to produce small quantities of lactic acid through lactose fermentation, resulting in noticeable decrease in pH (Soares et al., 2011). Beal et al. (1999) in a study on the combined effects of culture conditions and storage time on acidification and viscosity of yogurt reported that yogurt will always show a decrease in pH and increase in acidity during storage under refrigeration.

The results indicate that all treatments showed the same behavior throughout the storage period. All samples of Greek style yogurt with or without pequi pulp with storage period of up to 22 days showed pH and acidity values in accordance with Brazilian law (Brasil, 2007), which recommends minimum values of 0.6 and maximum of 15 g of lactic acid per 100 g of product. 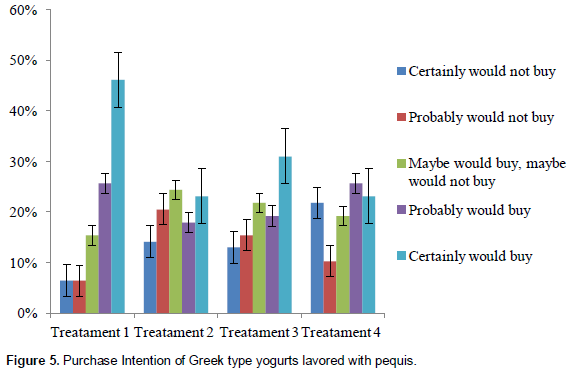 The Greek yogurt formulated with 2% pequi pulp showed better sensory acceptance and higher protein content. The addition of the pequi pulp decreased Greek yogurt brightness, but increased the intensity of the yellow color, making it a visually attractive for the consumer.

Based on the results of pH and titratable acidity, Greek yogurt enriched with pequi showed consumption the viability in until 22 days of storage. Pequi a typical fruit of the Brazilian savanna, has color, odor and flavor characteristic; it constitutes an alternative for inclusion in firm yogurts, however, work must be performed with the use of pulp at lower concentrations.

Capes, CNPq and FAPEG are acknowledged for the financial support.