The aim of this study was to evaluate the alkaline hydrolysis of chemical composition of sugarcane bagasse from urban centers. The experimental design was completely randomized design in split plots (5×4), composed of five application levels (0, 1, 2, 3 and 4%) and four NaOH exposure periods (24, 48, 72 and 96 h) in four replicates. Dry matter, ash, neutral detergent fiber, acid detergent fiber, cellulose and lignin were analyzed. The application of 4% of NaOH promoted reduction of neutral detergent fiber (NDF) and acid detergent fiber (ADF). There was no significant difference (p> 0.05) in treatments with application of 3 and 4% of NaOH; the treatment promoted a higher reduction in hemicellulose content. There was linear effect of the level of NaOH on dry matter, ash, NDF, ADF, and hemicellulose, however, lignin and cellulose content presented quadratic effect. Alkaline hydrolysis with NaOH provided improvements in the chemical composition of the sugarcane bagasse, which allows it to be used as feed for ruminants raised in urban and peri-urban environments.

The climatic changes that characterize the seasons, such as decrease in temperature and photoperiod, and the absence of rainfall, promote quantitative and qualitative deficits in forage produced in the pastures, causing the seasonality of forage production (Pádua et al., 2011). This period coincides with the abundant supply of by-products  and   residues   from   the   processing   of   the  sugar cane industry (de Carvalho et al., 2006), which represent an alternative to supplement animal feeding during the pasture shortage period.
According to Leite et al. (2014), organic solid waste constitutes a large part of the urban waste, which is mostly destined to landfills, although many Brazilian towns do not  have  basic  infrastructure  to  meet  the  minimum requirements of sanitary and environmental engineering. One of those residues is the bagasse originated from the production of sugarcane juice in small cafeterias and street vendors, which besides being destined to landfills, is also disposed on the street where it is produced to be collected by public cleaning personnel, and is also attractive to rodents and insects (Oliveira et al., 2006).
One of the alternatives for that residue is its rational utilization, allowing a reduction of environmental impacts and improvement of life quality of the population (Leite et al., 2001). In this context, the use of residues such as sugarcane bagasse in the feeding of ruminants managed in urban and periurban environments is a viable alternative (Aquino and Assis, 2007), faced with the constant demand of food for the animals managed in that environment.
However, this roughage product presents high levels of neutral detergent fiber, acid detergent fiber and low crude protein, minerals and vitamins content, low dry matter digestibility and voluntary consumption values (Pires et al., 2006), which suggests treatments that potentiate its use in animal feeding, such as sodium hydroxide (NaOH), in order to make the roughage more digestible by altering the cell wall structure, and allowing the action of microbial enzymes in the rumen (Reis et al., 2014).
However, there are doubts regarding the amounts of the compounds for an efficient treatment. It has been recommended that 3 to 4% of the dry matter, mainly NaOH, due to the risk of soil contamination by sodium because of the increased excretion of that ion by the animals (Ribeiro et al., 2010).
Thus, it was aimed in this study to evaluate the effects of alkaline hydrolysis using NaOH on bromatological composition of sugarcane bagasse originated in urban centers, with application of different levels and at different treatment periods.

The study was performed at the Animal Science Institute of the Federal Rural University of Rio de Janeiro UFRRJ, located in Seropédica - RJ (Latitude: 22º46'59 '' S, Longitude: 43º40'45''W and height of 33 m) in January, 2015. The type of climate of the region is the Aw type, according to the Köppen classification. The effect of alkaline hydrolysis using NaOH on the bromatological composition of sugarcane bagasse was evaluated. The sugarcane bagasse was acquired from merchants of sugarcane juice in Seropedica - RJ.
The experimental design was completely randomized in split plots (5×4), composed of four NaOH application levels (0, 1, 2, 3 and 4% on a dry matter basis), and four NaOH exposure periods (24, 48, 72 and 96 h), where treatments consisted of a combination of factors, resulting in 20 treatments, with four replicates each. The weight of the sugarcane bagasse of each plot at the time of application was 2 kg. The sugarcane bagasse was mixed up on a plastic canvas with the aid of a rake; each of the NaOH corresponding level was diluted in 750 ml of water, and distributed evenly over the two kilograms of bagasse.
At the end of each treatment period, samples of the material were collected for laboratorial analysis. The samples were pre-dried in a forced air circulation stove at 55°C for 72 h. After  obtaining  the first dry matter, the material was processed in a Willey mill with a 1 mm screen sieve for the bromatological composition analysis. The dry matter and ash analysis were performed according to AOAC (1990); the determination of neutral detergent fiber (NDF), acid detergent fiber (ADF), lignin and cellulose was according to Van Soest et al. (1991), and hemicellulose was estimated using the difference between NDF and ADF. The data were submitted for normality test, and all the variables presented normal distribution. The analysis of variance was performed to test for significance; a comparison of means was done using Tukey’s test, and the regression analysis for NaOH levels was done using the Expdes.pt package from the R studio program (Ferreira et al., 2013).

The treatment of sugarcane bagasse over a period of 72 and 96 h provided a higher dry matter content on all NaOH application levels, which did not differ statistically (Table 1). The increase in the dry matter content promoted by the increase in treatment period may have occurred due to a longer exposure of the bagasse to the environment, which caused it to lose moisture.

NaOH level influenced (p <0.05) the ash content in the sugarcane bagasse in the 4% of NaOH treatment, which did not differ from the 3% treatment for the exposure periods of 48 and 96 h (p>0.05). The increase of ash and consequently the reduction of organic matter is justified by the incorporation of minerals with the application of NaOH to the roughage (Garcez et al., 2014).
A negative and positive linear effect (p <0.05) were observed for dry matter and ash content, respectively, with increasing NaOH application levels on sugarcane bagasse (Figure 1).

The NDF and ADF contents decreased in all application levels of NaOH, when compared to the control treatment (Table 2). For all exposure periods, the application of 3 and 4% of NaOH provided the highest reduction of NDF and ADF contents at the 48 and 72 h exposure periods. These results are similar to those observed by Nolte et al. (1987), which obtained decreases in NDF, ADF and lignin contents in wheat straw treated with 4% of NaOH. The reduction of the fiber components occurs due to the beneficial effect of the use of alkaline products on low quality bulks due to the partial solubilization of hemicellulose and the expansion of celulose (Morais et al., 2016) 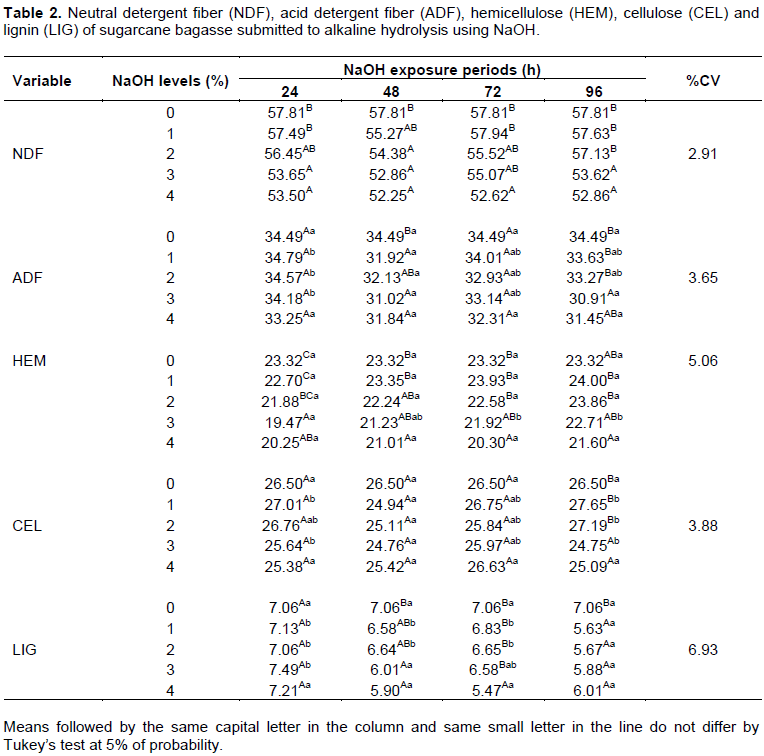 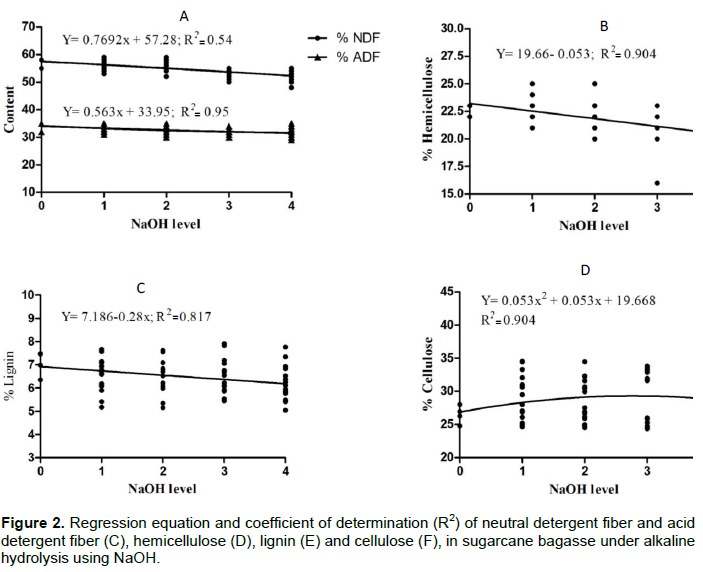 Pires et al. (2006)  obtained an effect of level with linear reduction for NDF, ADF and hemicellulose and quadratic for cellulose and lignin, when treating sugarcane bagasse with NaOH at different levels and periods of exposure to the treatment. The reductions of the fiber components as level of NaOH applied increases occur due to the alkaline swelling of the cellulose, promoted by NaOH, which consists of an expansion of cellulose molecules causing rupture of their bonds with the lignin, which is particularly susceptible to the hydrolytic attack of the compounds (Pires et al., 2010).

The application of 4% of NaOH based on the dry matter content of the sugarcane bagasse for a period of exposure to the treatment of 72 h, provided improvements in its bromatological composition, which favors its use by ruminants in urban and peri-urban areas.