Collection and preparation of plant material

The leaves were purchased from a local market in Hilla city, middle of  Iraq. After  thorough  cleaning  and removal of foreign  materials,  the leaves were stored in airtight container to avoid the effect of humidity and then stored at room temperature until further use (Jasim et al., 2015).

About 20 g of the plant sample powdered were soaked in 120 ml methanol for 18 h in a rotatory shaker. Whatman No.1 filter paper was used to separate the extract of plant. The filtrates were used for further phytochemical analysis. It was again filtered through sodium sulphate in order to remove the traces of moisture.

GC-MS (Agilent 7890 A) was used in this study to identify the components present in the extract (Mohammed and Imad, 2013; Kareem et al., 2015). About 1 μL of the methanol extract was injected into the GC-MS using a micro syringe (Imad et al., 2015a). Each of the peaks in the chromatogram represented the signal created when a compound eluted from the Gas chromatography column into the detector. The x-axis showed the retention time and the y-axis measured the intensity of the signal to quantify the component in the sample injected. As individual compounds eluted from the gas chromatographic column, they entered the electron ionization (mass spectroscopy) detector, where they were bombarded with a stream of electrons causing them to break apart into fragments. The fragments obtained were actually charged ions with a certain mass (Imad et al., 2015b). The mass/charge (M/Z) ratio obtained was calibrated from the graph obtained, which was called as the mass spectrum graph which is the fingerprint of a molecule. Before analyzing the extract using gas chromatography and mass spectroscopy, the temperature of the oven, the flow rate of the gas used and the electron gun were programmed initially. The temperature of the oven was maintained at 100°C. Helium gas was used as a carrier. The flow rate of helium was set to 1 ml per minute. The electron gun of mass detector liberated electrons having energy of about 70 eV. The column employed here for the separation of components was Elite 1 (100% dimethyl poly siloxane). The identity of the components in the extracts was assigned by the comparison of their retention indices and mass spectra fragmentation patterns with those stored on the computer library (Muhanned et al., 2015; Imad et al., 2015c).

Proteus mirabilis, Escherichia. coli, Pseudomonas aeruginosa, Klebsiella pneumoniae and Staphylococcus aureus were swabbed in Mueller Hinton agar plates. 60 μL of plant extract was loaded on the bored wells. The wells were bored in 0.5 cm in diameter. The plates were incubated at 37°C for 24 h and examined. After the incubation the diameter of inhibition zones around the discs was measured.

Five-millimeter diameter wells were cut from the agar using a sterile cork-borer, and 50 μl of the samples solutions (C. sativum and M. azedarach) was delivered into the wells. Antimicrobial activity was evaluated by measuring the zone of inhibition against the test microorganisms. Methanol was used as control. Amphotericin B and fluconazole were used as reference antifungal agents. The tests were carried out in triplicate. The antifungal activity was evaluated by measuring the inhibition-zone diameter observed after 48 h of incubation (Huda et al., 2015; Ameera et al., 2015).

Gas chromatography and mass spectroscopy analysis of compounds was carried out in methanolic leaves extract of C. sativum and M. azedarach shown in Tables 1 to 2. The GC-MS chromatogram of the twenty peaks of the compounds detected is shown in Figures 1 and 2. Chromatogram GC-MS analysis of the methanol extract of C. sativum showed the presence of 20 major peaks and the components corresponding to the peaks were determined as follows. The first set up peak was determined to be 1,6-octadien-3-ol,3,7-dimethyl (Figure 2). The second peak was indicated to be 1,6-octadien-3-ol,3,7-dimethyl, 2-aminobenzoate (Figure 3). The next peaks was considered to be  bicyclo[2.2.1]heptan-2-one,1,7,7-trimethyl, geranyl vinyl ether, 9,10-secocholesta-5,7,10(19)-triene-3,24,25-triol, ascorbic acid 2,6-dihexadecanoate, 7ah-cyclopenta[a] cyclopropa[f]cycloundecene (Figures 4 to 9). Coriander oil may have future use as a free radical scavenger, preventing oxidative deterioration in foods. In a report by Ramadan and Moersel (2006) coriander oil was shown to have greater activity against the radical generating activity of 1,1-diphenyl-2- picrylhydrazyl in several oils. Recently, Coriander oil has been reported to possess many medicinal properties, including antimicrobial properties against selected pathogenic (Martins et al., 2003; Ishikawa et al., 2003) antioxidant (Quynh et al., 2009), antidiabetic (Pourmortazavi and Hajimirsadeghi, 2007), anticancer and antimutagenic activities (Mohammad et al., 2011). Coriandrum sativum can act as source for oleic acid as the percentage found was 38.55% and soxhlation method can be used to extract it from the fruit (Padmaa, 2014). Shahidi (2008) reported that their synergistic effects are rendered by a combination of phytochemicals present in source materials, and complementary nature of phytochemicals from different sources are important factors to consider in the formulation of functional foods and in the choice of a healthy diet. 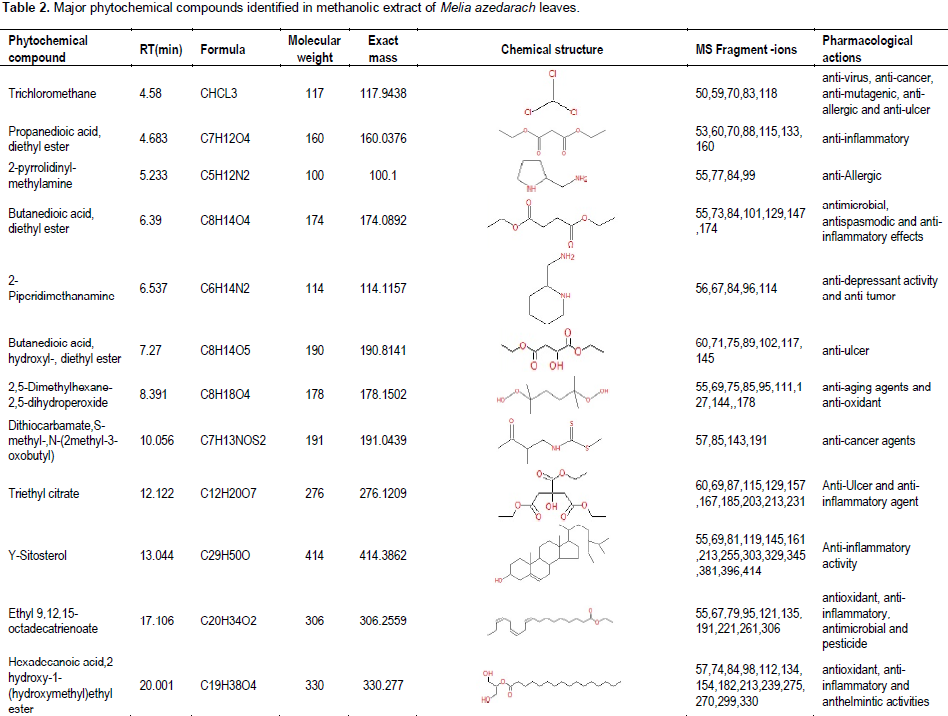 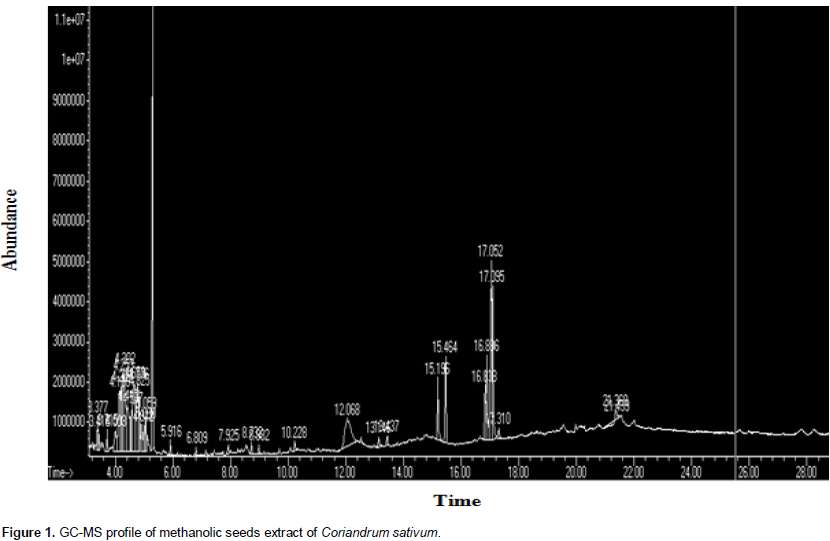 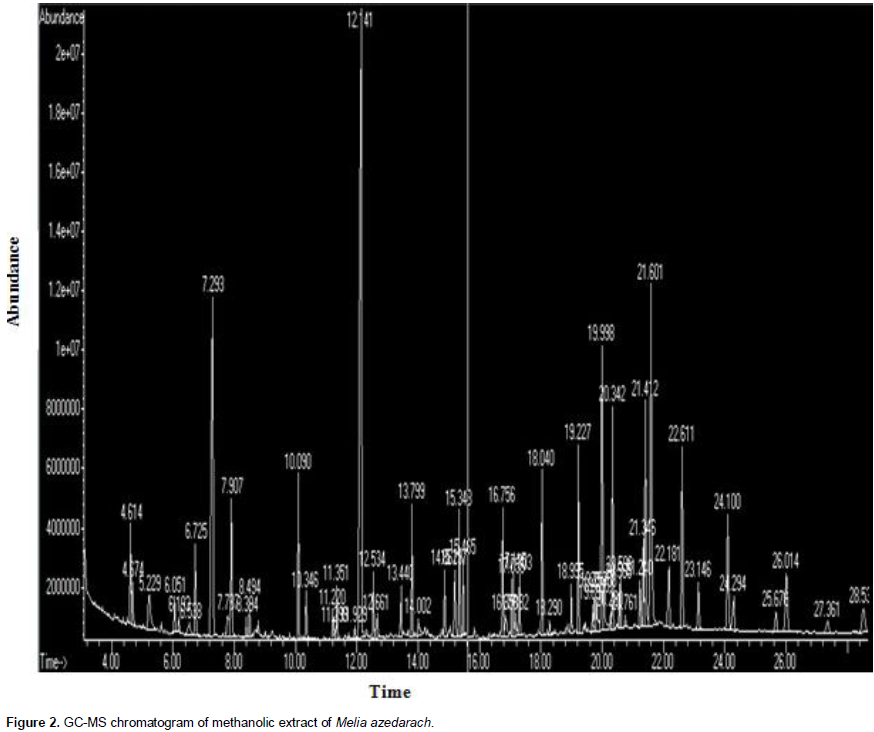 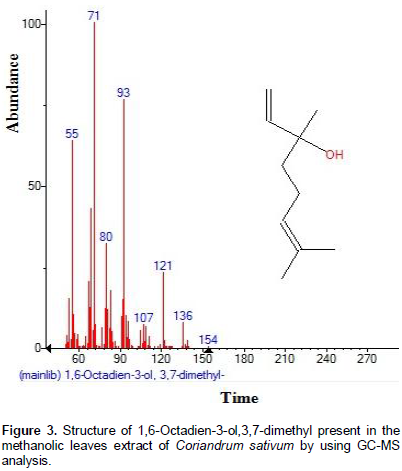 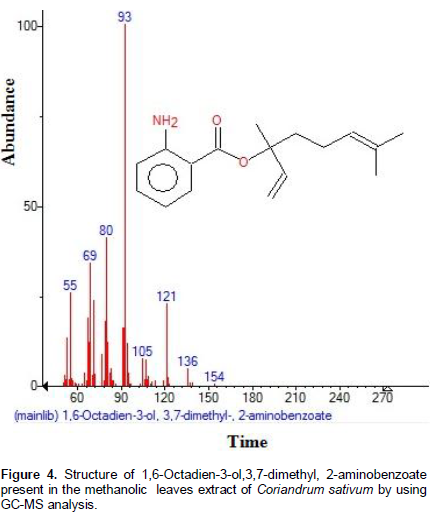 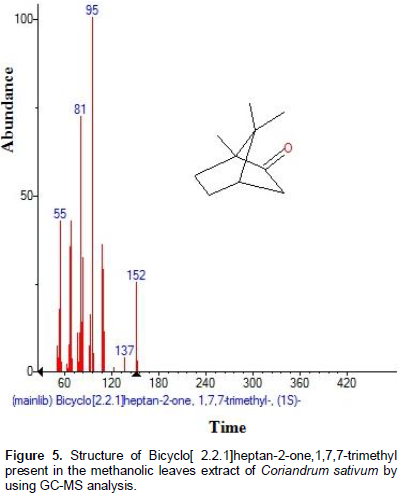 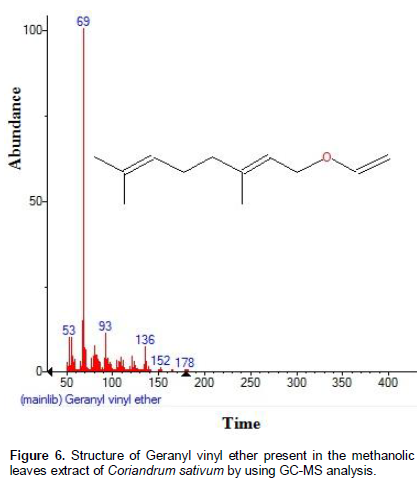 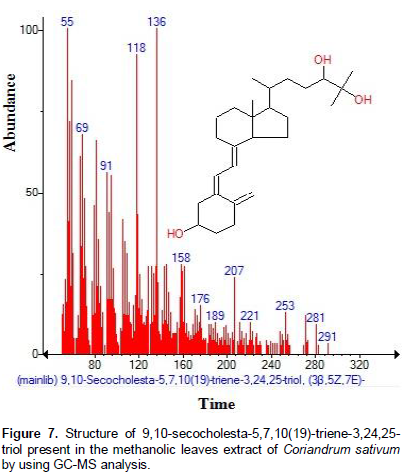 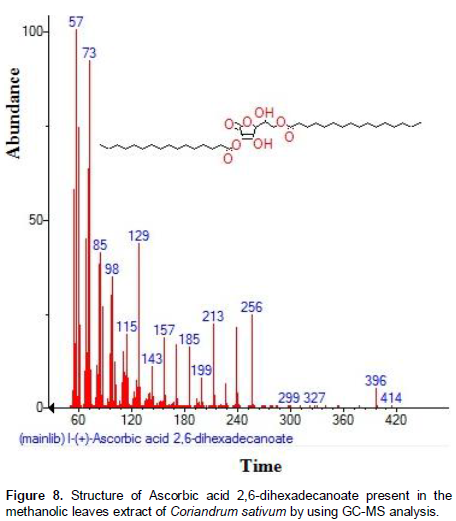 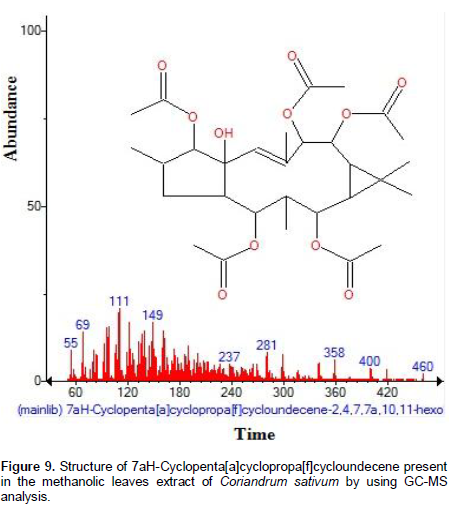 Medicinal plants are used in traditional treatments to cure variety of diseases (Hariprasad and Ramakrishnan, 2011).  Various scientific  studies reported the  analgesic, anticancer, antiviral, antimalarial, antibacterial, antifeedent and antifertility activity of this plant (Vishnukanta, 2008; Sen and Batra, 2011). Gas chromatography and mass spectroscopy analysis of compounds was carried out in methanolic leaves extract of M. azedarach as shown in Table 2. Chromatogram GC-MS analysis of the methanol extract of M. azedarach showed the presence of 13 major peaks and the components corresponding to the peaks were determined as follows. The first set up peak was determined to be Trichloromethane (Figure 10). The second peak indicated to be Propanedioic acid and diethyl ester (Figure 11). The next peaks considered to be 2-pyrrolidinyl-methylamine, butanedioic acid, diethyl ester, 2-piperidimethanamine, butanedioic acid, hydroxyl, diethyl ester, 2,5-dimethylhexane-2,5-dihydroperoxide, dithiocarbamate, s-methyl-,n-(2methyl-3-oxobutyl), triethyl citrate, y-sitosterol, ethyl 9,12,15-octadecatrienoate, hexadecanoic acid,2-hydroxy-1-(hydroxymethyl) ethyl ester, and octadecane, 3-ethyl-5-(2-ethylbutyl) (Figures 12 to 22). Plant based antimicrobials have enormous therapeutic potential as they can serve the purpose with lesser side effects. Continued further exploration of plant derived antimicrobials is needed today. 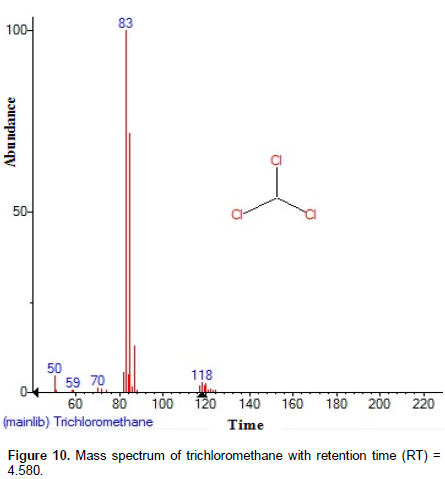 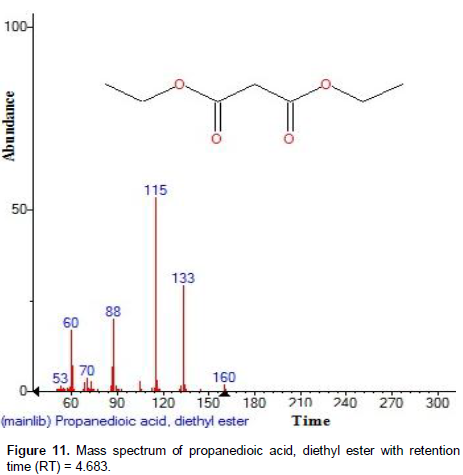 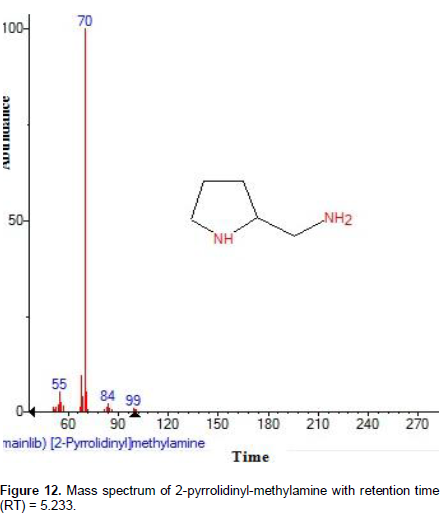 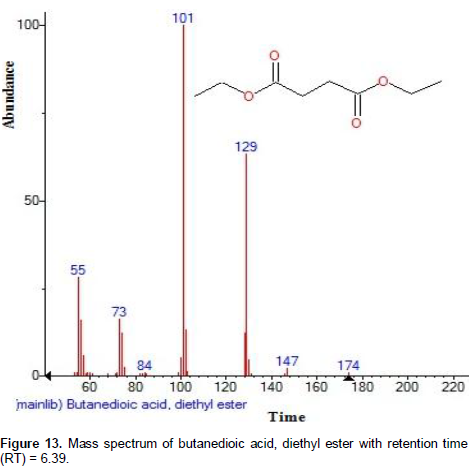 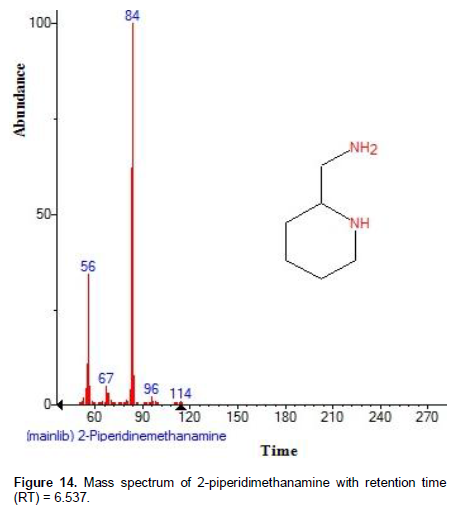 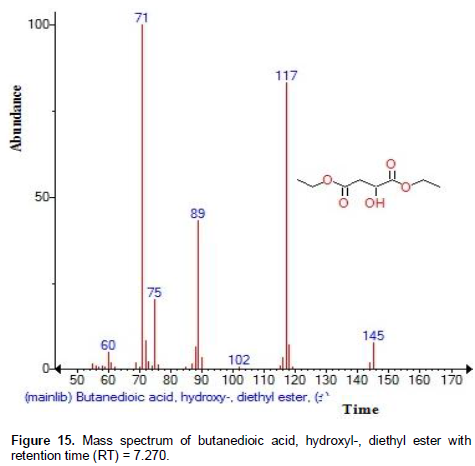 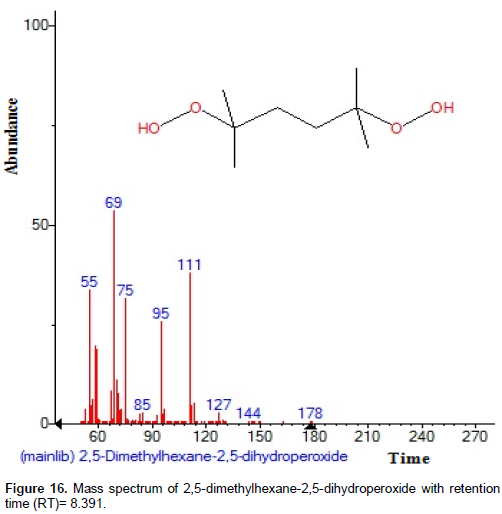 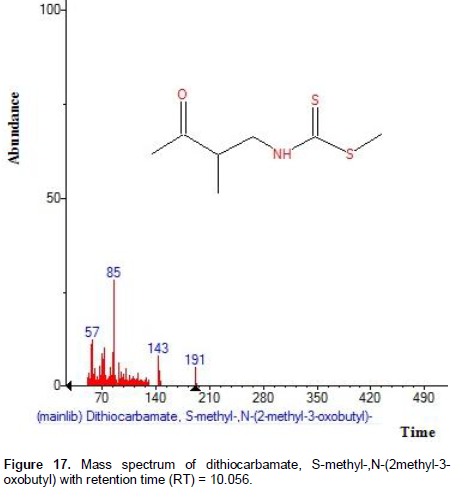 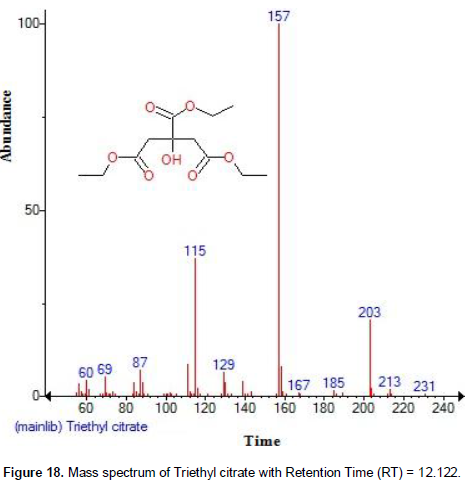 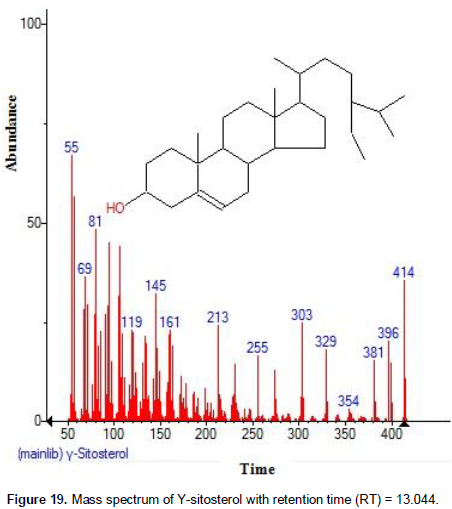 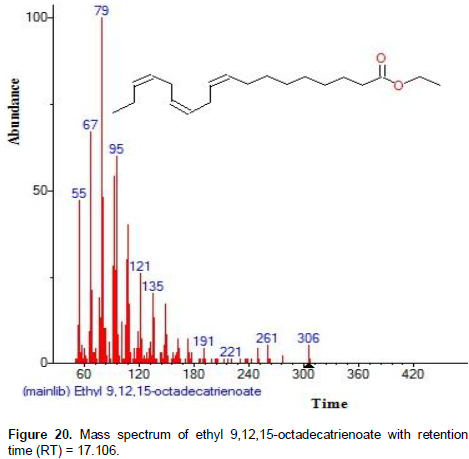 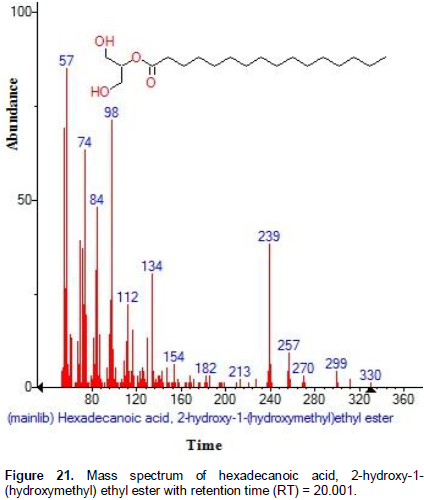 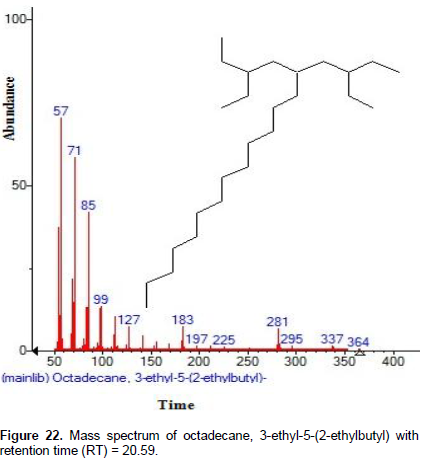 The authors thank Dr. Abdul-Kareem Al-Bermani, Lecturer, Department of Biology, for the valuable suggestions and encouragement.