Thirty two strains of Aspergillus genus were isolated from soil samples obtained from particular ecosystems: Laghouat endowed with a desert climate and Teleghma with a warm and temperate climate. Based on the morphological aspect, this collection was subdivided into ten phenotypic groups. This identification was confirmed by molecular analyzes using a molecular marker of the genu ribosomal 18s. This marker will allow us to associate our sequences with those of known organisms. In order to discover new antibiotic molecules, the antibacterial activity was performed against two Gram positive bacteria: Staphylococcus aureus and Bacillus subtilis and also two Gram-negative bacteria: Escherichia coli and Pseudomonas aeroginosa, using two different techniques: Agar cylinders and disks technique. The results show that the fungal species have an activity against at least one test bacterium. The Gram positive bacteria were the most affected, where the averages of the inhibition zones reach 34.33 mm. However, Gram-negative bacteria showed less important results from 0 to 12.00 mm. It is recorded that the antibacterial activity was studied for the first time in the following two species: Aspergillus niveus and Aspergillus wentii. Furthermore, an indepth study is underway on bioguided fractionation, which would identify individual components and lead to the isolation of the active ingredient.

The massive use of antibiotics has not led to the elimination of infections, but has made microbes resist these antibiotics by exerting a selection pressure which favors the  emergence  of  resistance  genes  in  bacteria, making multi-resistant strains to be responsible for serious infections. In recent years, bacterial resistance to antibiotics has become a worrying global phenomenon (Courvalin and Philippon,  1990;  Bevilacqua,  2011). Due to the increase in infections involving multi-resistant bacteria, the need for new effective antibacterial treatments is more and more imperious (Savin, 2014).
For this, the biodiversity is exploited. The isolation of strains from rarely exploited ecosystems allows the discovery of strains that may have a high potential or unexploited production. In addition, the use of antibiotic-resistant bacteria as germs tests can lead to the discovery of effective molecules which may be new (Boughachiche et al., 2012). In this field, fungi have been widely studied. Of a total of 10700 antibiotics described for the entire living world, about 1600 are from fungi (Botton et al., 1990).
Aspergillus species are ubiquitous molds, widely distributed in nature (Bennett et al., 2010). From an economic view, the species of this genus have a great ecological and medical importance. The production of extracellular and intracellular secondary metabolites by several species of this genus was detected in Aspergillus aculeatus, Aspergillus ochraceus and Aspergillus terreus. The latter are considered to be the highest producers of extracellular secondary metabolites (Youcef Ali, 2014). Indeed, Aspergillus are known for their ability to produce antibacterial substances such as A. flavus used in the manufacturing of aspergillic acid, A. ochraceus used in the manufacturing of penicillic acid and A. Fumigatus used in the manufacturing of fumagillin (Botton et al., 1990; Taniwaki et al., 2003; Abdelaziz, 2006).
This study aimed to show the antibacterial activity of Aspergillus strains isolated from different ecosystems and producers of active metabolites used against Gram positive and negative resistant bacteria through different methods.

Screening has always been the key to achieving new antibacterial molecules. Although its performance has been reduced in recent years, it is been practiced till date in many laboratories. They have endeavored to diversify the sources of microorganisms by developing selection methods that favor new species (Le Berre and Ramousse, 2003).
For this purpose, our work focuses on the research of antibacterial activity of certain strains of Aspergillus genus isolated from the soil sampled from particular ecosystems: Laghouat has a desert climate and Teleghma has a warm and temperate climate. Indeed, the soils of these zones, which constitute virtually particular media, seem to be promoter environments for the isolation of fungi producing new antibacterial substances. After isolation and purification, 32 strains of the genus Aspergillus were obtained from all samples. Based on the morphological characteristics, the strains collected were subdivided into 10 phenotypic groups.
Identification standards are mainly morphological. However, the application of molecular characterization tools has shown that this strictly phenotypic identification could lead to misidentification and that certain species groupings have no foundation (Thierry, 2011). For this, this morphological identification was confirmed by molecular analyzes.
The encoding DNA of 18S ribosomal RNAs of the isolates, extracted and amplified, is separated by agarose gel electrophoresis. The DNA bands obtained correspond to that of 600 base pairs of the molecular weight marker. The PCR products obtained were sequenced and subsequently compared with the sequences of the other microorganisms recorded in the Genbank database (Table 1). 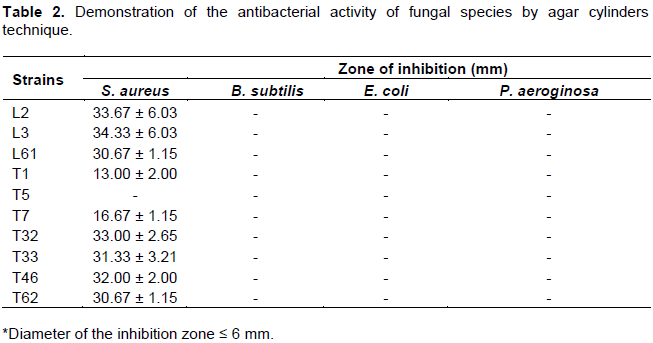 The species A. fumigatus, A. quadrilineatus, A.  niveus, A. terreus, A. wentii, A. fumigatiaffinis and A. sclerotiorum showed an important antibacterial  activity with respectively 34.33, 33.67, 33.32, 31.33, 30.67, 30.67 mm of inhibition averages (Table 2). After extraction with chloroform, the metabolic extracts of the 10 fungal species were examined for their antibacterial activity by disks technique.
The various extracts showed a more or less considerable antibacterial activity where the averages of the inhibition zones ranged from 7 to 31.67 mm, for the S. aureus bacterium, from 9 to 30 mm, for B. subtilis and from 0 to 11.33 mm for E. coli unlike P. aeroginosa on which the extracts of all species had no effect except the metabolic extracts of the A. niveus and A. wentii species that gave inhibition zones of 8 and 7 mm diameters, respectively. This technique revealed that the majority of species present antibacterial activity on at least one of the test bacteria and the species A. fumigatus, A. niveus, A. quadrilineatus and A. fumigatiaffinis showed considerable antibacterial activity (Table 3).
In fact, the species of Aspergillus genus are known by their production of substances having an antibacterial effect (Maria et al., 2005; Madki et al., 2010). These biologically active secondary metabolites are synthesized at the end of the growth (Attalah and Kacem-chaouche, 1992). Irobi et al. (2000) worked on the A. quadrilineatus fungal species and found that these species have remarkable antimicrobial activity against S. aureus and B. subtilis; Niege et al. (2002) showed that A. fumigatus have a remarkable antimicrobial activity against S. aureus, Candida albicans and Micrococcus luteus. Furthermore, Barakat and Gohar (2012) showed that A. terreus has a considerable antibacterial activity as compared to certain classic antibiotics; Al-Shaibani et al. (2013) worked on the antibacterial activity of  A. niger fungal species. The results revealed that this species has an inhibitory effect against P. aeruginosa, S. aureus, S. epidermidis, and Bacillus sp. The same results were observed by Ola et al. (2014) who found that neosartorin isolated from A. fumigatiaffinis had an important antibacterial activity against a large spectrum of Gram-positive bacterial species, including Staphylococci, Streptococci, Enterococci and B. subtilis. In addition, Phainuphong et al. (2017) found that penicillic acid isolated from A. sclerotiorum has antibacterial activity against S. aureus and E. coli with MIC values of 128 mg/mL. The antibacterial activity against Gram positive bacteria tests appears to be more important than the one against Gram negative staining bacteria. This is related to the results obtained by Prabavathy and Nachiyar (2012).
These results can be explained by the fact that these two groups of microorganisms differ morphologically, because Gram negative bacteria have an outer membrane which is a polysaccharide membrane carrying the lipopolysaccharide structural components. This makes the cell wall impermeable to lipophilic compounds, unlike Gram-positive bacteria, which will be more sensitive because they only have an outer peptidoglycan layer,   which   is   not   an   effective  permeability  barrier (Kumara et al., 2010).

The ten strains of Aspergillus isolated in this study showed a considerable antibacterial activity. It is interesting to test them against a range of human pathogens. Furthermore, an in-depth study is underway on bio-guided fractionation, which would identify individual components and lead to the isolation of active ingredients.