The Schiff base of isatin and sulphanilamide (L1; C14H11N3O3S) was prepared and reacted with Re(CO)5X (X = Cl and Br) in toluene to give [Re(C14H10N2O)(CO)3X] (X = Cl, 1 and X = Br, 2). The prepared Schiff base of isatin and 4-methoxyaniline (L2; C15H12N2O2) was reacted with Re(CO)5X in toluene to give [Re(C14H10N2O)(CO)3X], where X = Cl, 3 and X = Br, 4. L2 and Re(CO)5Br were refluxed in dry toluene under nitrogen and recrystallized to give [Re(C15H12N2O2)(CO)3Br].1/2C2H5OH (5). Spectroscopic characterization of compounds was done using FTIR, UV-Visible, NMR and Mass spectra analyses. Magnetic susceptibility measurements and melting points were also determined. Elemental analysis of 5 revealed it was a solvate molecule of 4. The in-vitro antimicrobial activities of compounds were evaluated against Staphylococcus aureus, Bacillus subtilis, Haemolytic Staphylococcus aureus, Pseudomonas aeruginosa, Escherichia coli, Klebsiella sp., Aspergillus niger, Trichoderma viride and Penicillium citrinum. Spectroscopic analyses revealed new terminal carbonyl bands formed between 1900 and 2030 cm-1, as L1 and L2 coordinated through their azomethine nitrogen and keto oxygen donor atoms towards Re(I). Results of the antimicrobial studies revealed immerse improved activities upon coordination against tested microorganisms especially gram-negative bacteria, therefore they are recommended for further studies in cell imaging.

Indole-2,3-dione (isatin) is a versatile starting material in syntheses. Its Schiff bases and complexes have been found to possess several pharmacological effects including anticonvulsant, antimicrobial and antiviral activities, inhibition of monoamine oxidase (Sridhar et. al., 2002; Adetoye et al., 2009), behavioural effects (Chohan et al., 2006) and activities against human immune-deficiency virus (Sriam et al., 2005). Isatin is an endogenous compound found in the brains and some tissues of mammals (Sridhar et al., 2002).  It was first isolated from the fruits and flowers of the Cannon ball tree (Couroupita gueanensis), thereafter its good antioxidant, antibacterial and anticancer properties have also been established (Premanathan et al., 2012; Guo, 2019; Ding et al., 2020). Coogan et al. (2009) and Azzarelli et al. (2019) have also shown that heavy metals are not just “poisonous”, but also possess great biological importance through the synthesis of several novel d6 transition organometallic based agents, which were also used to target specific biological entities. Therefore, the coordination of Re(I) to isatin Schiff bases is promising with prospective biological activities which could even target biological entities of cancerous cells and could also possess some therapeutic anticancer effects. Presently, there is little or no report on Re(I) complexes of isatin derivatives. All these primarily motivated this research, which aimed at preparing new biologically active Re(I) tricarbonyl complexes of isatin derivatives. Previously, the Re(I) tricarbonyl complexes of the Schiff base of isatin and aniline with good antimicrobial activities were reported (Ikotun et al., 2019a). In this paper, the successful preparations of Re(I) tricarbonyl complexes of the Schiff bases of isatin with sulfanilamide and isatin with 4-methoxyaniline as well as its antimicrobial activities were reported. 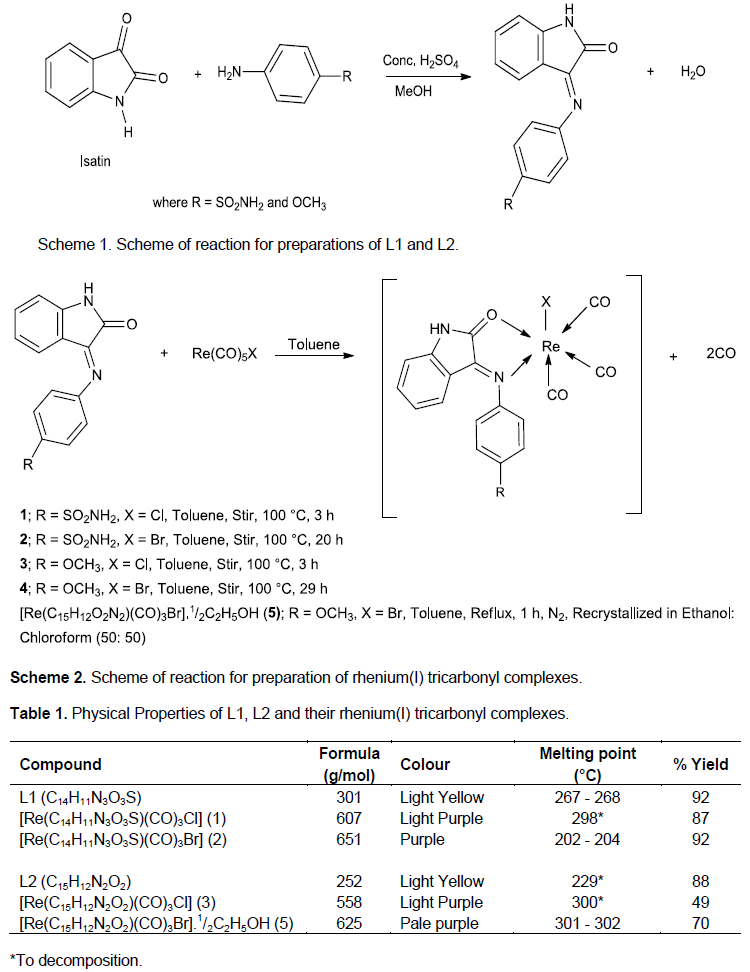 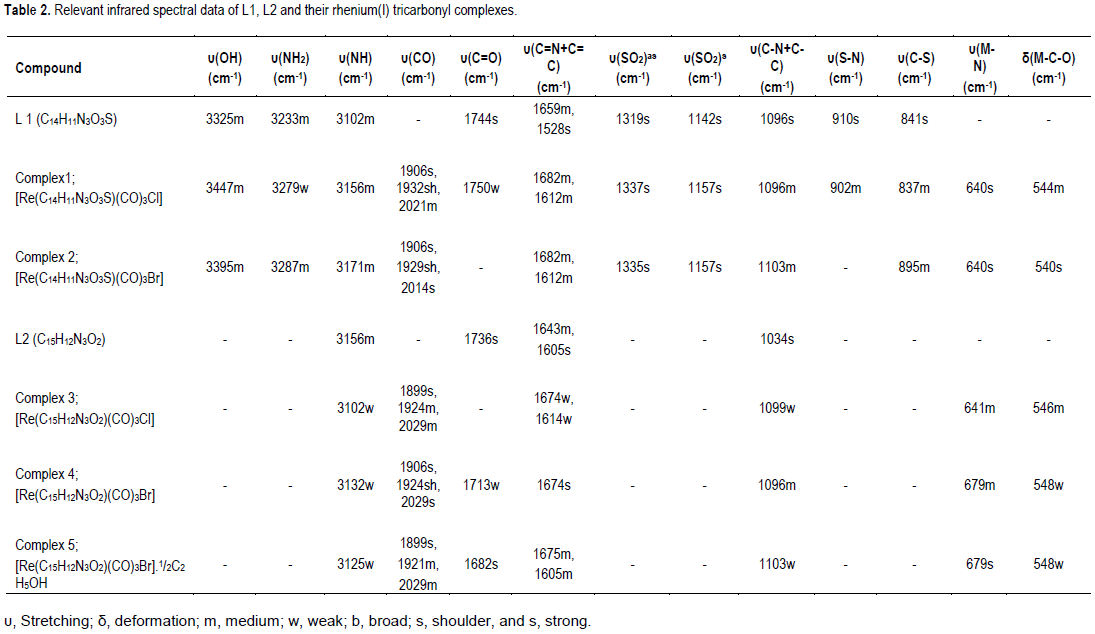 Electronic spectra
The electronic spectra data of L1 and its rhenium (I) tricarbonyl complexes 1 and 3 as determined in methanol are presented in Table 3. The maximum absorption bands (λmax) for these compounds have also been determined in methanol. The λmax for L1 is 24,631 cm-1 (406 nm) with a molar absorptivity value (E) of 2,720 M-1cm-1. This is expected due to the extended conjugation which could also include the C=N after deprotonating nitrogen in the indole ring of isatin, thus also presenting the tautomeric enol form of L1 in solution (Adetoye et al., 2009; Ikotun et al., 2019a). The λmax for complex 1 is 21,692 (461 nm) with the molar absorptivity value of 9,874 M-1cm-1. The λmax for complex 2 is 20,931 cm-1 (478 nm) with the molar absorptivity value of 6,332 M-1cm-1. 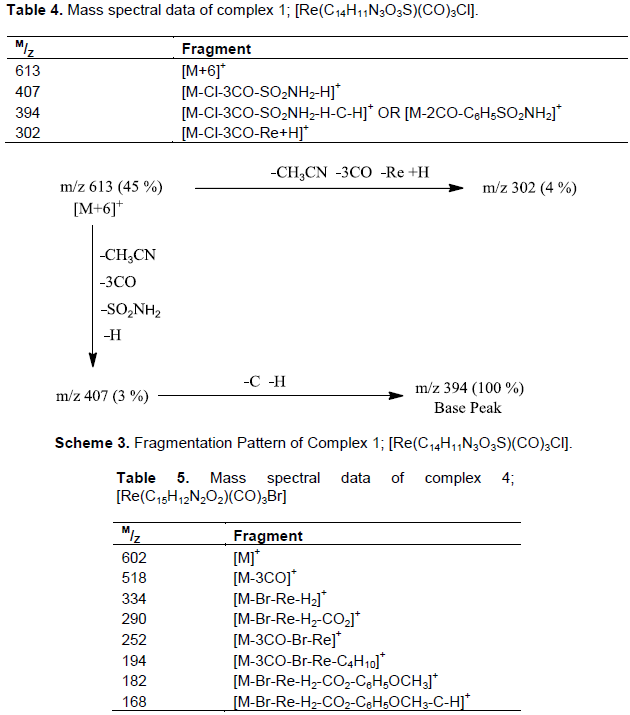 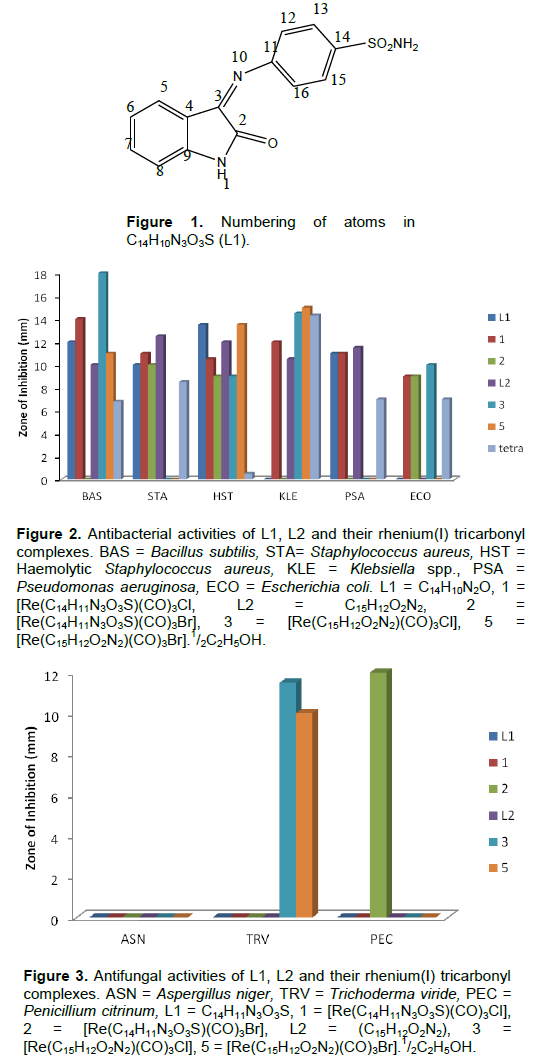 The rhenium (I) tricarbonyl complexes [Re(C14H11N3O3S) (CO)3Cl] (1), [Re(C14H11N3O3S)(CO)3Br] (2), [Re(C15H11N2O2)(CO)3Cl] (3), [Re(C15H11N2O2)(CO)3Cl] (4) and [Re(C15H12O2N2)(CO)3Br].1/2 C2H5OH (5) of the prepared isatin Schiff bases, 4-((2-oxoindolin-3-ylidene) amino)benzenesulfonamide (L1) and 3-((4-methoxyphenyl)imino)indolin-2-one (L2) were successfully prepared in good yields. Physicochemical properties of the prepared complexes were determined by spectroscopic means, as well as by magnetic susceptibility and melting point determinations. The spectral data confirmed the complexation of L1 and L2 in ratio metal: ligand = 1:1. The IR spectra of these complexes showed new carbonyl bands identified as terminal carbonyl bands. L1 and L2 have acted in a bidentate manner towards Re(I) coordinating through the azomethine nitrogen and keto oxygen. The prepared complexes were found to be diamagnetic, thus revealing that the ligands are strong field ligands. Results of the antimicrobial studies showed significant inhibitory activities  against the growth of tested Gram  negative bacteria in the decreasing order 1>3>5>2, therefore they can be recommended for further applications in cell imaging in consistence with literature (Varma et al., 2020).

The authors are grateful to Dr. Micheal P. Coogan for his helpful discussions during the course of this research. They also thank Prof. John A. Gladysz for providing facilities for a portion of these studies, and helpful discussions, while AAI visited his group at Texas A & M University, United States. They are grateful to late Professor Gabriel O. Egharevba, a profound Inorganic/Organometallic Chemist, who encouraged collaborative research, provided a ladder for many to climb up strongly. The US National Science Foundation (NSF, CHE 1153085) is thanked for supporting the portion of the research carried out at Texas A & M University.