The present study includes two experiments; the physiological and the biotechnological experiments. The physiological experiment was designed to investigate the most interesting rare natural phenomenon of the development of vegetative reproductive organs (bulbils) in the inflorescence of tiger lily. In the other hand, the biotechnological experiment was carried out to evaluate the regeneration potential of bulbils culture in vitro. In the first experiment, the plants of tiger lily Lilium lancifolium var. Flore Pleno which were grown in greenhouse showed that the Pseudo viviparous phenomenon at the end of flowering when vegetative bulbils were induced in the inflorescence. These bulbils as pseudo viviparous structures were precisely formed in place of flowers and along the floral stalks. The flower head was completely surrounded by the extensive numbers of these bulbils; some of them continued in growth and produced new shoots. The tissue culture experiment of tiger lily var. Flore Pleno was carried out using bulbils culture for eight weeks of culture in vitro. The results indicate that the bulbils was shown to be a good choice as explants for micropropagation but the potential of these bulbils to produce  bulblets, shoots and roots was greatly influenced by the concentrations of naphthalene acetic acid (NAA) and  benzyl aminopurine (BA) in culture. However, the concentration of 1 mg/l BA combined with 0.1 mg/l NAA was shown to be the optimum for micropropagation of tiger lily var. Flore Pleno.

The bulbils formation in the inflorescence is a rare phenomenon that occurs in certain plants in nature. This natural phenomenon is called Pseudo vivipary which is a kind of a specific asexual reproductive way that some plant can achieve under some conditions when the flowering process is aborted and  developmental changes occurred to produce new plantlets or bulbils in place of flower instead of floral organ and seeds. This kind of asexual reproduction is widely recorded in some monocots plants in many families such as Liliaceae Alliaceae, Agavaceae, Pocceae, Saxifragaceae and polygonaceae particularly in some grasses (Elmqvist and Cox, 1996; Kuzmanovic et al., 2012; Moore et al., 1976; Tooke et al., 2005; Szarek and Holmesley, 1996). While, most lilies produce many types of reproductive structures for their vegetative reproduction during growing, such as daughters and bulblets, but some lilies can produce aerial black tiny bulbils commonly along the stem at the point where leaves join the stems. However, the varieties of tiger lily (Lilium lancifolium), Splendens, Flore Pleno and Fortuni are well known for their tiny black bulbils production on stem plant. The asexual reproductive structures which were produced in plants during growing can be increased by application of flower buds removal practices (Dantuluri et al., 2002; Leclerc et al., 2005), and they can be used to propagate the plants in a traditional way in nursery or in vitro however, the aerial bulbils is considered to be a good source of explants without the contamination problem of soil borne diseases (Lian et al., 2009; Shu and Park, 1993; Kasai et al., 2000).
In lily micropropagation, various organs as explants were used such as pedicel, filament, leaf, root, bulb-scale and several studies concerned the effect of cytokinin and auxin concentrations the on regeneration ability of these explants to produce bulblets, shoots and roots (Kumar et al., 2006;  Duong et al., 2001). It is well known that the cytokinin together with auxin play an essential role in plant morphogenesis, they have great influence on the formation of roots and shoots they have great the ratio of these two hormones can determine the kind of plant development (Werner and Schmülling, 2009; Bartrina et al., 2011). The objective of this paper was to study the development of bulbils in the inflorescence and to investigate the use of these bulbils as explants in vitro for micropropagation of tiger lily.

The present studies included two experiments; the first was designed to investigate the development of bulbils during plants growing for two tiger lilies and to evaluate the application of bud removal practice for increasing the bulbils production of plants, second experiment was carried out to determine the potential of bulbils as explants for micro propagation in vitro of tiger lily var. Flore Pleno. The first experiment was carried out at the computerized greenhouses with environmental control systems in school of biomedical and biological sciences, University of Plymouth during 2014 at temperature around 25°C. Healthy Bulbs of the tiger lilies were grown by John Innes mixture no.3 as growing medium and the experiment included four treatments; two varieties of tiger lilies L. lancifolium (Lilium tigrinum) var. Splendens and var. Flore Pleno with or without flower buds removal practice; the flower buds were removed when they became 2 cm long, each treatment contained 12 plants. In tissue cultural experiment, the whole bulbils of tiger lily var. "Flore Pleno" were used as explants; these explants were carefully washed and sterilized with 10% v:v  bleach solution (5.25% sodium hypochlorite) for 15 min and washed 3 to 4 times with sterilized distilled water before culturing. The explants were then cultured on Murashige and Skoog (MS) basal medium containing 30 g L-1 sucrose, 8 g L-1 agar, pH 5.7, supplemented with naphthalene acetic acid (NAA) and  benzyl aminopurine (BA) in different concentrations; all cultures were incubated in a Gallenkamp growth cabinet under 16 h photoperiod, provided by cool-white flourescent lamps with an irradiance of 100 μmol m-2 s-1 at a constant temperature of 25°C for 8 weeks. All explants were placed in a vertical position on the agar, and this experiment contained six treatments with 12 explants per treatment, and the concentrations of BA and NAA were (1 mg/l BA) (1 mg/l BA+ 0.1 mg NAA), (0.5 mg/l BA), (0.5 mg/l BA+ 0.1 mg NAA), (1 mg NAA) and control.
The healthy bulbs were purchased from Hyde and Sons Nursery-UK; nutrient solution and chemicals were from Sigma-Aldrich Company Ltd. Data of greenhouse experiment, number and weight (g) of bulbils per plant were collected at flowering time while number and weight (g) of daughters, bulblets and weight (g) of bulb roots, stem roots, per plant were collected after 16 weeks from planting. Data of tissue culture experiment, number and weight (g) of bulblets, roots and number, weight (g), length (cm) of shoots per bulbils were collected after eight weeks of culture. The statistical analysis system (SAS, 2012) was used to show the effect of different factors in the study parameters. Significant difference-LSD test was used in this study to significant compare between means at the (0.05) level of significance. 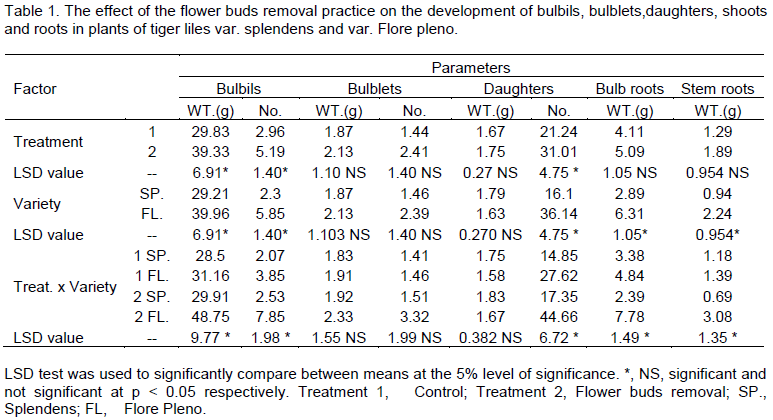 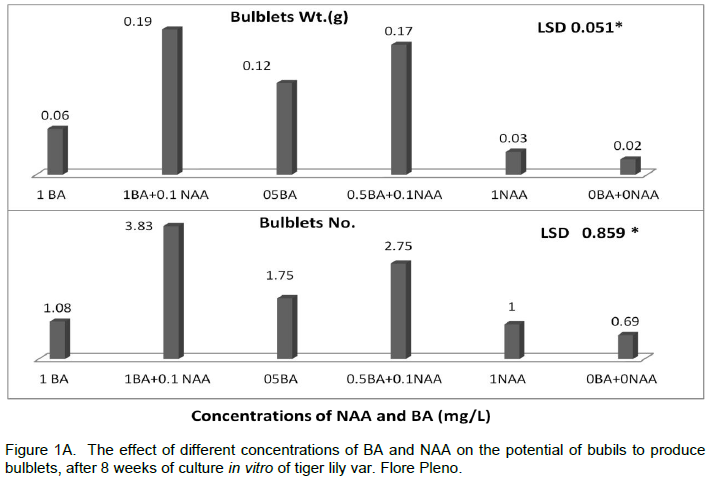 While, the tiger lilies (L. lancifolium) var. Splendens and var. Flore Pleno produced bulbils before flowering along the stem at the point where leaves join the stems as common bulbils, but at the end of flowering, more bulbils appeared in the inflorescence of Flore Pleno  plants  as Pseudo viviparous structures precisely in place of flowers and along the floral stalks. This natural Pseudo viviparous phenomenon was widely recorded in some monocots plants which belong to many families such as Liliaceae Alliaceae, Agavaceae, Pocceae, Saxifragaceae and polygonaceae (Elmqvist and Cox, 1996; Kuzmanovic et al., 2012; Moore et al., 1976; Tooke et al., 2005). It may be that the formation of these bulbils in the inflorescence of double tiger lily was, instead of seeds because this lily is commonly believed to be sterile and not capable of producing seeds as fertilization was unsuccessful. However, many studies reported that this asexual kind of reproductive way occasionally happen in 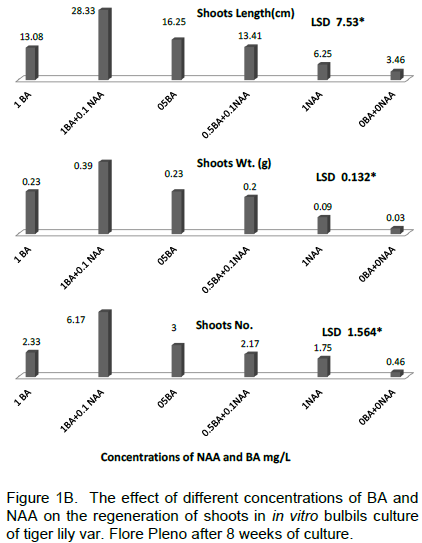 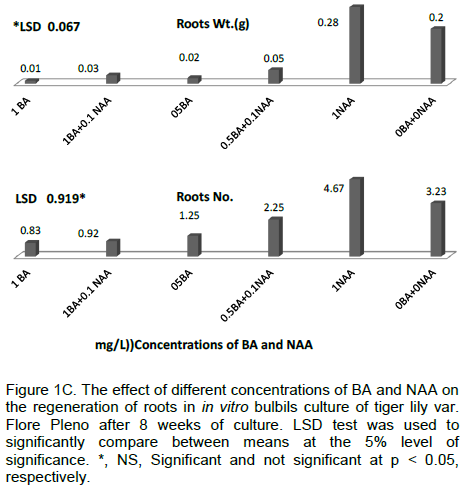 nature in specific conditions in some plants when the flowering process is aborted and some developmental changes occur to produce new plantlets or bulbils in place of flower instead of floral organ and seeds (Arizaga et al., 1995; Maria et al., 2010; Pierce et al., 2003; Tooke et al., 2005; Wang and Cronk, 2003). The results also show that the bulbils production of tiger lilies can be increased by application of flower buds removal practice and that may be due to increasing the supply of assimilates to the propagules, and this results agree with those of previous studies (Dantuluri et al.,  2002; Leclerc et al., 2005).
In the study of bulbils culture in vitro of tiger lily var. Flore Pleno for eight weeks of culture, the results of this study show that the potential of bulbils to regenerate bulblets, shoot and roots was greatly influenced by the concentrations of NAA and  BA in culture. Different concentrations of NAA and BA showed different results related to growth rate of bulblets, shoots and roots. Similar results of this effect of the growth regulators were found in several studies (Kumar et al., 2006; Duong et al., 2001), however, the concentration of 1 mg/l BA combined with 0.1 mg/l NAA was shown to be the optimum to produce bulblets and shoots while the highest growth rate of roots system as weight (g) were observed at concentration of 1 mg/l NAA.  The results indicate that the bulbils is to be a good source for micropropagation of tiger liliy var. Flore Pleno particularly with no contamination problem of soil borne diseases and that agree with previous studies (Lian et al 2009; Shu and Park, 1993; Kasai et al.,  2000).

The author would like to express his appreciation to Professor M.P. Fuller for his invitation to visit the School of Biological Sciences, Plymouth University, Plymouth, Devon, PL4 8 AA, UK and to give him the opportunity to carry out his research work at his laboratory.