Embracing micro-propagation method for large scale production of plantlets and also for protection of appropriate germplasm is a prerequisite that needs to be undertaken in order to develop a rapid in vitro regeneration protocol for Ocimum sanctum L. Shoot tips as well as nodal segments were subjected to numerous shoots inducement. Explants were cultured on Murashige and Skoog Basal Medium (MS) supplemented for different plants’ development controllers. HgCl2 was utilized as a surface disinfecting agent. Nowadays, many researchers do not use HgCl2, so 1% sodium hypochlorite can be used. Cleaned explants were chiseled to 3-4cm length at right edges. The explants were inoculated vertically on the culture medium. The cultures were incubated at 25±2°C under cool fluorescent light.  The photoperiod was set at 16 h light and 8 h darkness by automated timer. Data on shoot induction and expansion and root induction were recorded following three weeks of inoculation and utilized for figuring. Built up plantlets were transplanted in earthen pots under circumstances and outliving degree was recited. The practically viable surface sanitization medication for explants of O. sanctum was discovered at 0.1% HgCl2 for 7 min. 1% sodium hypochlorite also showed same result. Maximum number of shoots per culture was recorded in MS medium containing 2.0 mg/l BAP in a mixture of 0.5 mg/l NAA. Regenerated shoots of O. sanctum were rooted most effectively in full MS medium supplemented with 1.0 mg/l NAA. It was observed that nodal segments are more responsive to micro-propagation than shoot tips. This protocol is used to explore the opportunities of utilizing O. sanctum L., as important medicinal plant of Bangladesh, in modern medical health care system by rapid clonal propagation, and germplasm conservation. The developed plants were acclimatized in pot successfully and also maintained in normal environment.

Bangladesh is a country which investigates sumptuously in medicamentary hereditary contrivance by virtue of its favorable agro-climatic condition and seasonal diversity. Almost 500 medicinal plants have medicinal applications. 80% rustic people depend on unregenerate explants (e.g. medicinal plants) for their chief healthcare (Rahman et al., 2013). When they are malignant medicinal plants, Bangladesh people trust on imported raw materials of pharmaceuticals. The most sacred plant in Bangladesh, Ocimum sanctum L. (Lamiaceae) is an aromatic herb; it is an under shrub or shrub (Saha et al., 2013); it is up to 45 cm tall, grows in a low bush and commonly known as holy basil, Tulsi or Tulasi. Within Ayurveda, tulsi is known as “The Incomparable One,” “Mother Medicine of Nature” and “The Queen of Herbs,” and is respected as an “elixir of life" that is without equivalent for both its restorative and profound properties (Singh et al., 2010).The hydro-refining of the aeronautical parts of O. sanctum is at the vegetative, botanical maturing stages. Furthermore, full blooming phases yield 0. 98, 0.92 and 1.1% (w/w) essential oil, individually. Concoction parts of the fundamental oils refined starting with three developmental phases of O. sanctum are ethyl isovalerate, α-pinene, sabinen, β-pinene, myrcene, 1,8-cineole, linalool, terpinen-4-ol, α-terpineol, estragol, eugenol, α-cis-bergamotene, α-humlene, β-bisabolen, γ-elemene and methyl chavicol (Saharkhiz et al., 2015).

The fundamental properties of O. sanctum are: it brings down glucose levels, is antispasmodic, a pain relief, brings down circulatory strain, mitigates cardiovascular depressant, is antiulcer, fights against fruitfulness, prevents cancer, is hostile to stretch marks, an invulnerable stimulant, and a smooth muscle relaxant. It may also be able to keep early occurences of carcinogenesis and different concentrates; additionally it provides evidence of anti HIV-I (Kayastha, 2014). It is hostile to gonorrheal, is against multi-resistant strains of Neisseria gonorrhea and clinical confines of beta lactamase-delivering methicillin-safe Staphylococcus aureus (Gupta et al., 2014). The oil from O. sanctum likewise has radio-protective applications (Ramesh and Satakopan, 2010). A consultative body cautioned against potential anti-fertility impacts of O. sanctum when devoured in considerably high amounts (Narayana et al., 2014). Micropropagation of medicinal plants is of great importance for mass propagation of high yielding clones. In vitro technologies offer a tremendous potential for obtaining raw material for the pharmaceuticals (Tasheva and Kosturkova, 2013). Utilization of the rising line of genomic innovations can overhaul our concern about the relationship between genomic assorted qualities and metabolite differences and the feasible use of plant pharmaceutical assets (Hao and Xiao, 2015). Considering the therapeutic and odoriferous importance of O. sanctum, not very many endeavors have been made to institutionalize micropropagation technique for cloning this plant. O. sanctum is not an endangered plant, but a valuable medicinal plant; so if we develop a method for in vitro regeneration of this plant, that can open many areas for further research and germplasm preservation.

In this paper, our point is to portray a straightforward and solid convention to increase this pharmaceutically important plant through high-recurrence axillary shoot multiplication.

Murashige and Skoog (MS) medium composed of nutrient basal salts was used, which contains macro, micro elements and vitamins. It is necessary to utilize ideal supplement for accomplishing high development rates (Murashige and Skoog, 1962; Saad and Elshahed, 2012). The explants were washed together under flowing faucet water and treated with antiseptic (4-5) drops savlon along with 2-3 drops of Tween-20; and then washed with distilled water. They were then suspended in 0.1% (w/v) HgCl2 solution for 7 min to ensure contaminant free cultures; this was followed by five rinses with sterile distilled water to distance all hints of HgCl2. Sterilized explants were incised to 3-4 cm length at right edges. At present HgCl2 is not used by most of researchers, so 1% sodium hypochlorite can be used.

For shoot initiation, BAP was used at different concentrations (0.5, 1, 2, 3 and 4 mg/L) as well as BAP in combination with NAA, IAA, 2,4-D at different concentrations (0.1 and 0.5 mg/L) in full strength of MS medium. NAA and IAA (0.1, 0.5, 1 and 2 mg/L) were used for root initiation in full and half strength of MS medium. The prepared melted medium was dispensed into test tubes (150 × 25 mm). For carbon source 3% sugar was used and the medium was solidified with 1.0% agar. The pH of the media was adjusted to 5.8 before autoclaving at 15-lbs/inch2 pressure at 121°C temperature for 15 min. The explants were inoculated vertically on the culture medium. The cultures were incubated at 25±2°C under the cool fluorescent light. The photoperiod was set at 16 h light and 8 h darkness via computerized clock. The regenerated shoots of 1-3 cm in length were removed aseptically and transferred into test tubes containing the same or different hormones supplemented media for the shoot and root induction. Optic notice of culture was made every week. Data on shoot induction and expansion and root induction were recorded following three weeks of inoculation and utilized for count. The healthy plantlets that attained 5-8 cm heights were taken out from the test tubes; and the roots were washed under running tap water to remove the medium. At that point the plantlets were prepared for transplantation to plastic pots containing soil, sand and fertilizer (1:1:1) for solidifying. Built up plantlets were transplanted in earthen pots under certain conditions and outliving rate was recorded. 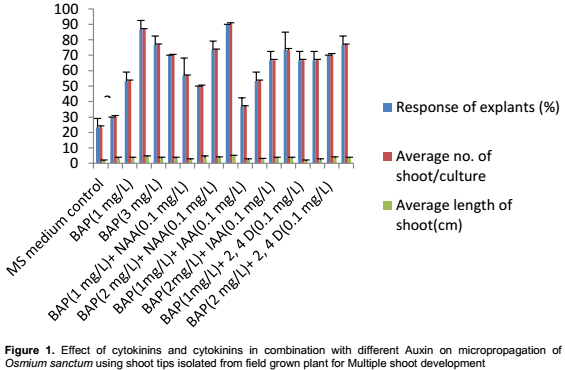 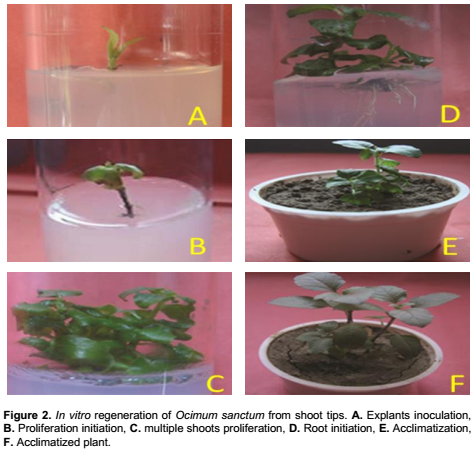 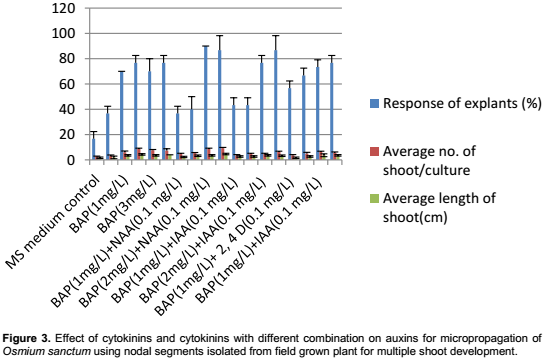 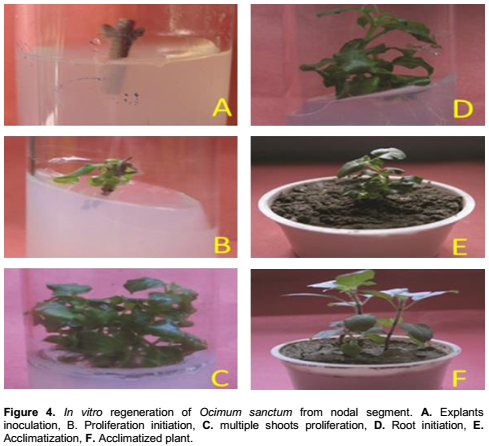 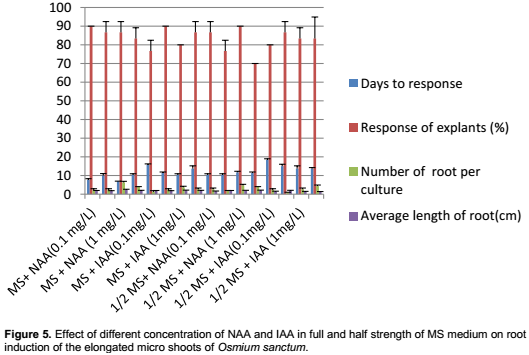 In the free examination, 90% of plants adapt for long, and the apex quantities of shoots per explants were found from shoot tips and nodal portions in media having 2.0 mg/l BAP in combination with 0.5 mg/l NAA. The most astounding mean length of the shoot was additionally considered in these media. It was established well in full MS containing 1.0 mg/l NAA. Along these lines, for high productivity of micro propagation, it is suggested that nodal explants can be refined for 6-7 weeks in 2.0 mg/l BAP in combination with 0.5 mg/L NAA.

Proficient regeneration systems are vital for hereditary designing, mass-propagation studies and enhanced plant generation (Murch and Saxena, 2004). Distinctive concentrations of cytokinin alone or in combination with auxin were utilized to observe the response of shoot regeneration from shoot tip and nodal explants. Cytokinin promotes cell division and shoots induction (KyteL, 1987). Various investigations have demonstrated that plant root improvement may be interceded by the deliberate activity of auxin (Moriwaki et al., 2011).

Different concentrations of cytokinin or in combination with NAA, IAA and 2, 4-D were used to test multiple shoots proliferation potentiality from shoot tip and nodal explants (Ndoye et al., 2003). In the present investigation, combination of BAP with NAA was also considered effective. Higher concentrations of cytokinin (BAP) have a positive effect on shoot multiplication. Multiple shoot formation was recorded with higher concentration of BAP (Susila et al., 2013).

It is shown that the regeneration protocol improved by this experiment is more proper for commercial use than established report (Singh et al., 2009) because of minimum use of hormone concentration. An efficient shoot proliferation is made possible with a well-developed rooting system for successful acclimatization and finally it can be established in field (Abdulmalik et al., 2012). Mostly, NAA and IAA were used in different concentrations in full and 1/2 strength of MS basal medium (Fotopoulos and Sotiropoulos, 2005). Roots were formed even within 2 weeks of culture in media having 1.0mg/L NAA. The plantlets that improved from separate in vitro culture were proficiently rooted in field. So, the plants can luxuriantly grow in the field (Sharma et al., 2014). In the bestow scrutiny, the outliving of seasonal plant is 85%, which has been clearly proved better than previous report (Begum et al., 2002).

In conclusion, this study describes an efficient procedure for in vitro micro-propagation and a successful acclimati-zation of O. sanctum L. This protocol can be completely used in this species for variegated purposes such as in vitro conservation, cryopreservation, substantial scale augmentation and hereditary transformation. This enhances the opportunities to employ O. sanctum L, an important medicinal plant of Bangladesh, for modern medical health care.

The authors are very much grateful to the authority of Islamic University, Kushtia, Bangladesh for their financial support from IUBT 0756, and also to the Department of Biotechnology and Genetic Engineering, Islamic University, Kushtia, Bangladesh for their help in using the Laboratory of Plant Tissue Culture and Molecular Biology Laboratory of the Department.