Opaque sorghum beers significantly contribute to the diet of millions of people in Africa due to their relatively low alcoholic content and high dry matter and nutrients concentration (Novellie and De Schaepdrijve, 1986). The beers are known as tchoukoutou in Benin (Kayodé et al., 2005), dolo in Burkina-Faso (Dicko et al., 2006), burukutu or otika in Nigeria (Odunfa, 1985), bili bili in Tchad (Maoura et al., 2005), Kaffir in South Africa (Novellie and De Schaepdrijver, 1986), doro or chibuku in Zimbabwe (Chamunorwa et al., 2002) and ikigage in Rwanda (Lyumugabe et al., 2010). Tchoukoutou, the Benin opaque sorghum beer, is produced from guinea corn (Sorghum bicolor) by women using various processes. In general, as in the conventional lager beer process, the manufacturing process consists of three main phases: malting, mashing and fermentation. Grains of sorghum are soaked in water overnight (9 to 12 h), germinated (72 to 85 h), sun dried (7 to 15 h), ground in a disc mill, mixed with water, decanted and divided into slurry and supernatant. The slurry is mashed under gradual heating until the boiling point is reached after 2 h, mixed with supernatant and allowed to ferment overnight, then filtered, boiled (6 to 9 h), cooled, and inoculated with a starter called kpete-kpete, which is generally harvested from the bottom of a previous fermenting beer (resulting from 13 to14 h overnight fermentation). The fermentation step is a critical step in the process, and its success depends on the accurate knowledge of the processor in terms of the starter handling. Several researches reported that the microorganisms contained in the traditional starters of African opaque beers mainly consist of yeasts and lactic acid bacteria (LAB) (Van der Aa Kühle et al., 2001; Demuyakor and Ohta, 1991; Sefa-Deheh et al., 1999; Sanni and Lönner, 1993). The microorganisms are kept alive by replacing the supernatant on a daily basis. The preservation of such starter is a tedious and a risky business since it is common that the starter loses its fermenting properties and therefore fails to make the beer effervescent, as a result of the death of the involved microorganisms.
Preliminary data demonstrated that rural and urban women’s groups in the processing chain of opaque sorghum beers derive a direct benefit from increased marketing opportunities (Kayodé et al., 2007). Thus, innovations in the traditional brewing technology and the product quality could significantly improve the income and livelihood of rural households involved in this activity. Recently, Kayodé et al. (2012) defined a granule starter for the fermentation of opaque sorghum beer; but still, the effective dose and the fermentation duration for this granule are not determined.
The aim of the present study was to determine the optimum doses of the granule starter for the fermentation of the African opaque sorghum beers. More specifically, the objective was to evaluate the effect of the starter concentration and the fermentation duration on several beer quality in determining various factors such as dry matter, refractive index, pH, titratable acidity, ethanol, glucose, raffinose, fructose, maltose, yeast, LAB and total mesophilic aerobic bacteria counts of the fermenting beer. It is quite likely that these factors are interdependent. However, interactions between factors cannot be detected using the one-factor-at-a-time approach (Giovani, 1983). Therefore, we used the response surface method in applying a central composite design.

Production of the granule starter and wort
The granule starters were produced using a tannin-free sorghum variety, yeasts and lactic acid bacteria harvested from the traditional starter of opaque sorghum beer. The processing procedure was according to the method described by Kayodé et al. (2012). Sorghum wort was produced  according  to  the  traditional  brewing practices, as follows: sorghum grain were soaked overnight (10 h), germinated (72 h), sun to dried (12 h), ground in a disc mill, mashed in water by gradually heating until the boiling point was reached after 2 h, soured during an overnight rest, filtered, boiled (8 h) and cooled.
Experimental design
Response surface methodology is a statistical method that uses quantitative data derived from an appropriate experimental design, with quantitative factors use to estimate the relationship between a response and the factors in order to optimize processes or products (Giovani, 1983). In this study, an orthogonal rotatable central composite design (Montgomery, 2001) for K = 2 factors was used, to estimate the simultaneous effect of two process variables on physico-chemical and microbiological characteristics of sorghum fermenting beer in a quadratic function. The variables (factors) were the starter concentration (0-150 g/L), and the fermentation duration (0 to 24 h). In this experimental design, dry matter, refractive index, pH, titratable acidity, ethanol, glucose, raffinose, fructose, maltose, yeast, LAB and total mesophilic aerobic bacteria counts are considered as the responses. The design generated 14 observations which are distributed as follows: 4 kernel points, 4 star points and 6 replications at the central point. The design matrix and variable combinations are presented in Table 1.

Experimental fermentation
Sorghum wort (14 L) was inoculated with the granule starter at concentrations varying between 0 and 150 g/L. The inoculated wort was allowed to ferment at room temperature for an indicated time as specified in the experimental design (Table 1). When the predefined times were reached at a given starter concentration, samples were withdrawn, divided into two parts. The first part was immediately analyzed for microbiological characteristic while the second part was kept at -4°C for physicochemical analyses.
Counts of microorganisms
Total counts of mesophilic aerobic bacteria, LAB, yeasts and molds were enumerated according to the method described by Nout et al. (1987). Duplicate samples of stabilized starter (10 g) were diluted in 90 ml sterile peptone physiological saline solution (5 g peptone, 8.5g  NaCl, and 1000 mL distilled water, pH = 7.0) and homogenised with a Stomacher lab-blender (type 400, London, UK). Decimal dilutions were plated. Total mesophilic aerobic bacteria counts were determined on plate count agar (PCA, oxoid, CM 325, Hampshire, England) after incubation at 30°C for 72 h. Viable counts of LAB were determined on the Man, Rogosa and Sharpe agar (MRSA, CM 361, Oxoid, Hampshire, England) containing 0.1% (w/v) natamycin (Delvocid, DSM, The Netherlands) after incubation at 30°C for 72 h in anaerobic jar (Anaerocult A, Merck KGaA, Germany). Viable yeasts were determined on Oxytetracyclin glucose yeast extract agar (OGYA, Oxoid CM 0545, Basingstoke, Hampshire, England) after incubation at 25°C for 72 h.
Physico-chemical analysis
Titratable acidity and pH were determined as described by Nout et al. (1989). Dry matter was determined according to the American Association of Cereal Chemists (AACC) Approved Methods (AACC, 1984). The refractive index was measured using a refractometer (Sopelem 9596, France).
HPLC analysis of sugars and alcohol
Ethanol and soluble sugars were determined following the method developed by Mestres and Rouau (1997) using the column Aminex HPX87H-Biorad (Hercules, USA) thermostated at 37°C. Elution was done with sulfuric acid 5 mM at a flow rate of 0.6 mL/min. Detection was at 210 nm. Analyses were performed in triplicate.
Statistical analysis
Data were analyzed using the Minitab 14 statistical program. A second order polynomial model was proposed to establish the relationship between the responses (Y) and the variables (X) as follows:
Y = b0 + b1x1 + b2x2 + b 3x12 + b4x22+ b5x1x2
Where, b0 is constant, b1 and b2 are linear effect coefficients, b3 and b4 are quadratic effect coefficients, and b5 is an interaction affect coefficient. The fitted polynomial equations were expressed in a 3D response surface in which the response is presented on the vertical axis and two factors at the two horizontal perpendicular axes. 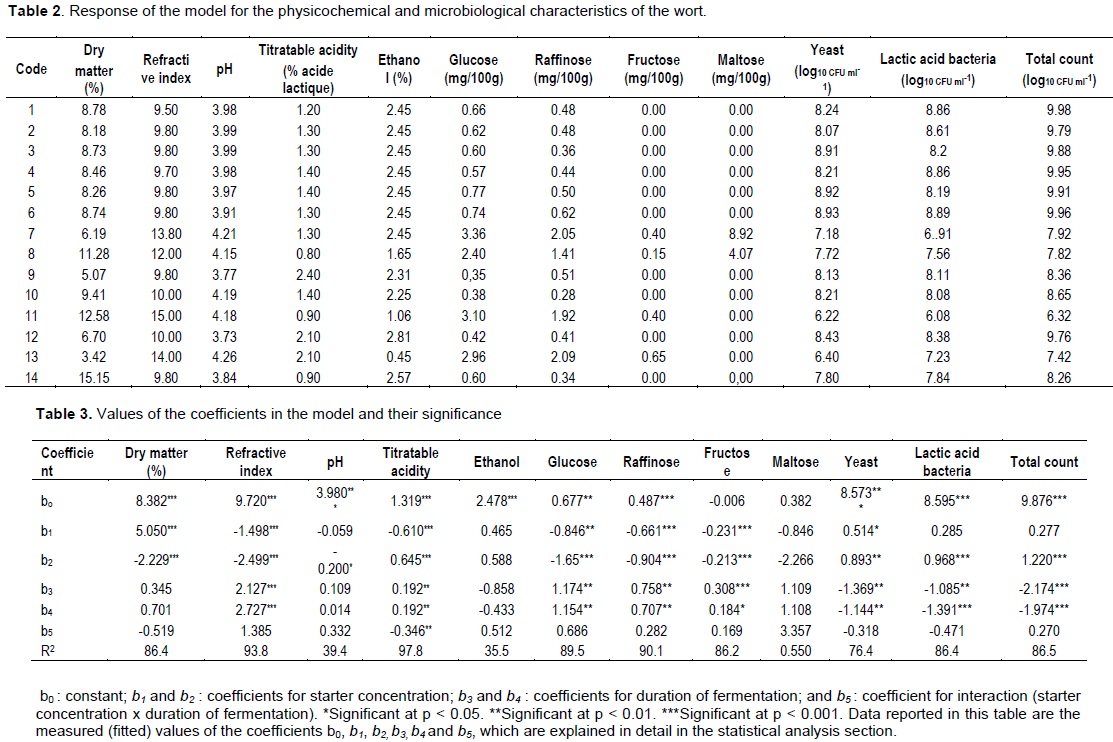 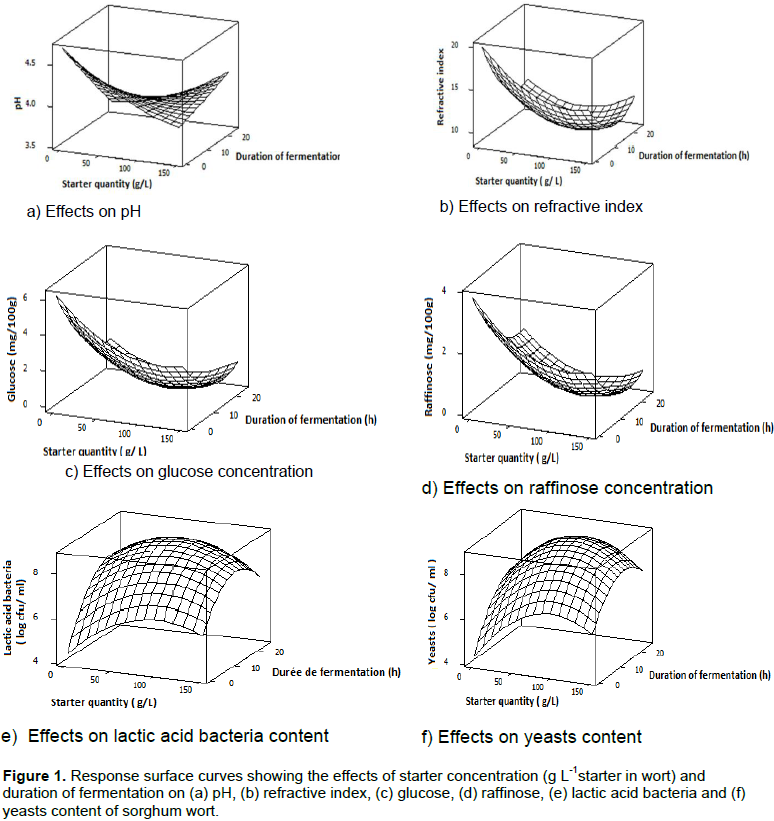 The alcoholic fermentation is characterized by the increase in yeasts which transform soluble sugars into ethanol (N’Guessan et al., 2008). That could also explain the negative correlation between glucose concentration and ethanol (r = - 0.717; p < 0.01). Yeasts are positively correlated with LAB (r = 0.836; p < 0.001). A symbiotic relationship between yeasts and LAB was previously reported (Nout, 1991; Savova and Nikolova, 2002). LAB create an acid environment which are favorable to yeasts growth (Yao et al., 2009) and produce vitamins to increase other factors, such as amino acids, to aid the growth of LAB (Lyumugabe et al., 2010).

The use of dried starter granules derived from the traditional starter brought significant improvements in the beer quality at relatively short fermentation duration. The application of the response surface methodology revealed the linear effects of the processing parameters as well as their mutual interactions. We recommend the use of the granule starter in the fermentation of African opaque sorghum beers for the production of stable beer at shorter fermentation duration.