Lactic acid bacteria (LAB) arise in Kaşar cheese, an artisanal pasta filata cheese produced in Turkey from raw milk without starter addition or pasteurized milk with starter culture. In this study, 13 samples of Kaşar cheese that were produced from raw milk were used as reference materials. LAB were characterized by using phenotypic, API and Fourier transform infrared (FTIR) spectroscopy methods. One hundred and fifty-seven (157) strains were isolated from 13 cheese samples, and identification test was performed for 83 strains. At the end of the study, a total of 22 Lactococcus sp., 36 Enterecoccus sp. and 25 Lactobacillus sp. were determined in the isolated strains by phenotypic identification. After identification with FTIR spectroscopy and statistical analysis, expected results were not taken by FTIR spectroscopy due to higher correlation (> % 99) obtained with more than one reference culture. Fewer number of reference strains was a limitation of the analysis. Therefore, identification should be made with more reference bacteria in the FTIR analysis and should also be supported with molecular techniques.
Key words: Kaşar cheese, lactic acid bacteria, identification, Fourier Transform Infrared (FTIR).

Fourier transform infrared (FTIR) spectroscopy is used for characterization of many microorganisms. It is useful at the serogroup, species and genus level, data acquisition is faster than in PAGE and other techniques and preparation is simple and quick. FTIR spectroscopy and cluster analysis of bacterial cells is a promising tool not only for identification and classification purposes based upon bacterial IR spectra alone, but also as an additional aid to support conventional methods for clarifying relationships, especially within poorly classified taxa (Helm et al., 1991). Phenotypic and biochemical methods such as morphological and physiological properties, API CHL50 kit are useful at genus-species level but they are insufficient at sub species level for characterization of LAB (Kıran and Osmanağaoğlu, 2011). Molecular genetic techniques, such as randomly  amplified polymorphic DNA analysis PCR-based methods have been successfully used to identify LAB at the subspecies level but it is difficult to adapt them for their use in routine laboratories due to their high costs and the requirement for highly skilled personnel (Kirschner et al., 2001). It is important to be able to identify and characterize LAB in the dairy industry with rapid, reliable and cheap methods (Amiel et al., 2000).

Kaşar is a semi-hard "pasta filata" (plastic curd) cheese which is produced by being boiled and kneaded after curd of the cheese is acidified (Üçüncü, 2008). Kaşar is one of the most produced and consumed cheese type in Turkey and in some of Balkan and European countries (with different names like Kaşkaval, Kassari, Kachkawaj) (Halkman and Halkman, 1991). Kaşar is produced in Turkey from raw milk without starter addition or pasteurized milk with addition starter culture. Therefore, Kaşar cheese produced from raw milk is fermented by lactic acid bacteria originated from the milk. The number of systematic studies aiming determination of starter culture in Kaşar cheese is very few (Akyüz, 1978; Tunail, 1978; Halkman and Halkman, 1991). The use of the right starter cultures is essential and is important to produce Kaşar cheeses with a constant high quality.

The main purpose of the present study was to compare biochemical identification methods with FTIR cluster method for identification of LAB isolated from Kaşar cheese. Also, the FTIR spectra of the isolates were compared to a spectrum library to obtain FTIR identification. Two methods were applied in this study in order to evaluate the relevance and mutual agreement between methods, and the capacity of each method to accurately identify different LAB species present in Kaşar cheese.

Preparation of samples for FTIR spectroscopy

Ten milligram of lyophilized cultures was crushed together with approximately 300 mg of KBr in agate mortar. The mixture was transferred into 10 mm diameter disks and placed under 10 tons/cm² pressures for 10 min. The disks were analyzed by FTIR (Perkin Elmer, Spectrum 100). Spectra samples between 4000 and 450 cm-¹ wavelengths were taken in the analysis. Each sample was scanned 64 times at 4 cm-¹ resolution. The study was conducted with two parallels (Başyiğit Kılıç, 2009).

After reading the absorbance values obtained from the range of 4000 to 450 cm-¹ wavelengths, they were analyzed by the use of the Statistical Package for the Social Sciences. Similar rates of isolates were determined with the aid of Pearson correlation product moment coefficient at regions of 3000 to 2800, 1500 to 1400, 900 to 700 cm-1 wavelengths in order to identify and separate strains. Hierarchical cluster analysis was applied to the isolates whose similarity rates were over 99% and dendogram was drawn with Ward's algorithm (Naumann et al., 1990).

A total of 157 isolates were obtained from 13 cheese samples. Physiological and biochemical analysis were further conducted with 83 isolates in terms of morphological characteristics, catalase activities, and gram reactions. Biochemical tests were carried out based on Sherman classification. Cocci that could grow under conditions such 10, 15, 45°C, 6.5% NaCl and pH 9.6 were identified as enterococci. The rest of the cocci strains were evaluated as lactococci.

Taking these criteria and their phenotypic characteristics into account, 36 of 83 isolates were identified as Enterecoccus sp. and 22 of them were identified as Lactococcus sp. The rest of the 25 isolates which were morphologically  identified  as  bacilli  were  evaluated  as Lactobacillus sp., they were capable to grow at a temperature of 15°C. Seventeen (17) of 22 isolates which were identified as Lactococcus sp. was estimated as Lactococcus lactis ssp. lactis (L. lactis), and three of them was estimated as L. lactis ssp. cremoris (Lactococcus cremoris), and two of them was estimated as L. lactis ssp. lactis biovar. diacetylactis (Lactococcus diacetylactis). In contrast to expected, five of these isolates that was identified as L. lactis could be grown in pH 9. 6 medium conditions, the other five could be grown at 45°C temperature, and seven of them could also be grown in medium which had 6.5% NaCl additive. Similar atypical reactions, in which strains were growing in various conditions such as pH 9.6, 45°C and 6.5% NaCl, were also observed for Lactococcus sp. isolates in various studies such as that of Tunail et al. (2001) who worked on Feta cheese, Bulut (2003)’s work on Pottery cheese and Kırmacı (2010)’s work on Urfa cheese. Unexpected positive and negative reactions also occurred in the tests where Lactococcus sp. was used to distinguish as subspecies. The results were evaluated as the subspecies-specific atypical reactions. It was noticed that the five isolates which were identified as L. diacetylactis and L. lactis could not generate ammoniac from arginine. In Garde et al. (1999) study, 13 of 57 arginine positive isolates isolated from cheeses produced from raw milk, were determined as L. cremoris and 44 of them were determine as L. lactis. Our study found out that, two isolates identified as L. cremoris could grow in a medium of 4% NaCl additive.

As a result of biochemical tests which provide identification based on physiological characteristics and nutrient requirements of bacteria, it is known that bacteria give atypical reactions because of adaptation to different conditions. Tolerance of bacteria isolated from cheeses with high salt concentration or whose clot is boiled, increasing with increase temperature or salt concentrations, respectively. Hence, it is believed that these cultures can adapt to these environment. Due to the resistance of difficult circumstances of Enterecoccus sp., 36 isolates which showed positive reaction particularly to conditions such as 6.5% NaCl, pH 9.6, and temperature of 10 to 45°C, were separated as Enterecoccus sp., 27 of them were identified as Enterococcus faecalis (E. faecalis) due to the 0.04% telluride reduction. 12 of 27 E. faecalis isolates could produce CO2 by using citrate. Entrecoccus sp. is used as a starter culture in foods due to their properties such as lipolytic and esterolytic activity, citrate utilization and synthesis of volatile aromatic compounds (Vuyst et al., 2002; Giraffa, 2003; Erginkaya et al., 2007). Enterococcus faecium and E. faecalis in particular, can contribute to provide flavor for cheese due to their ability of producing compounds such as acetaldehyde, ethanol, diacetyl and acetone (Franz et al., 2003; Giraffa, 2003; Erginkaya et al., 2007). Twenty-four (24) Enterecoccus sp. were identified as 14 E. faecalis, five Enterococcus durans, three  Enterococcus hirae, two E. faecium by using Gram-positive ID kit. The 11 E. faecalis isolates were similarly identified through both biochemical and carbohydrate tests but three of them was evaluated as E. hirae (two isolates) and E. durans (one isolates) as a result of a biochemical (carbohydrate) test.

Biochemically, identified 25 lactobacilli strains were evaluated as 12 Lactobacillus plantarum (Lb. plantarum) and 13 Lactobacillus sp. as a result of sugar tests and 16 of them were evaluated as seven Lb. plantarum, 7 Enterococcus curvatus and two Enterococcus fermentum by using API 50 CHL kit. Seven isolates were identified as L. plantarum as a result of both biochemical and carbohydrate tests (API 50 CHL kit) (Sharpe, 1979; Balows et al., 1991; Durlu-Özkaya et al., 2001). 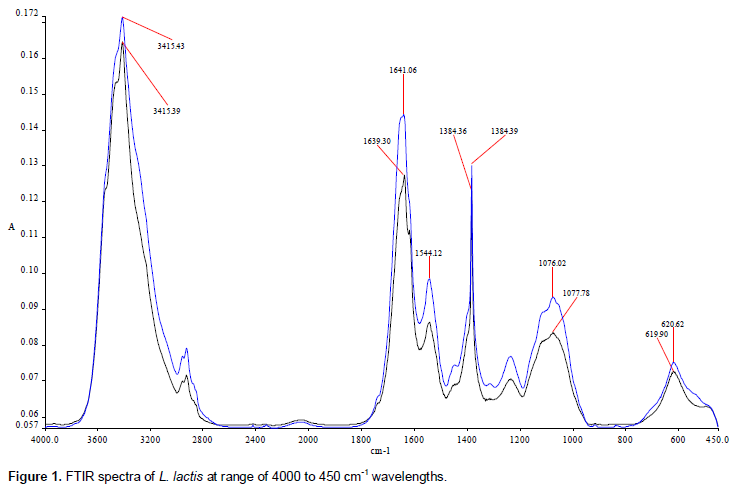 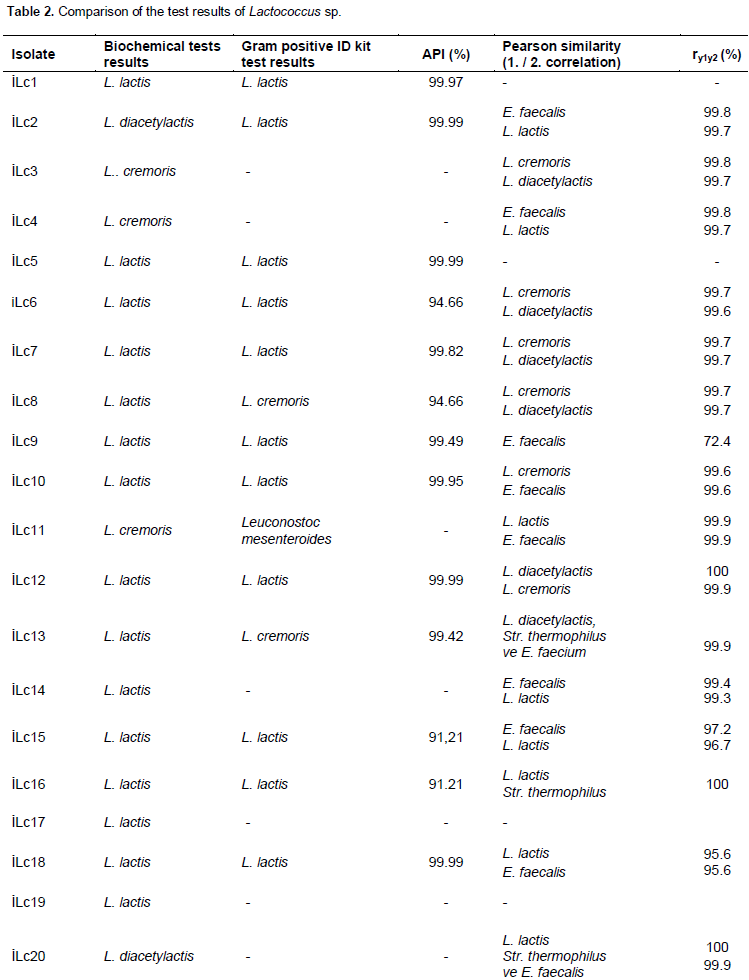 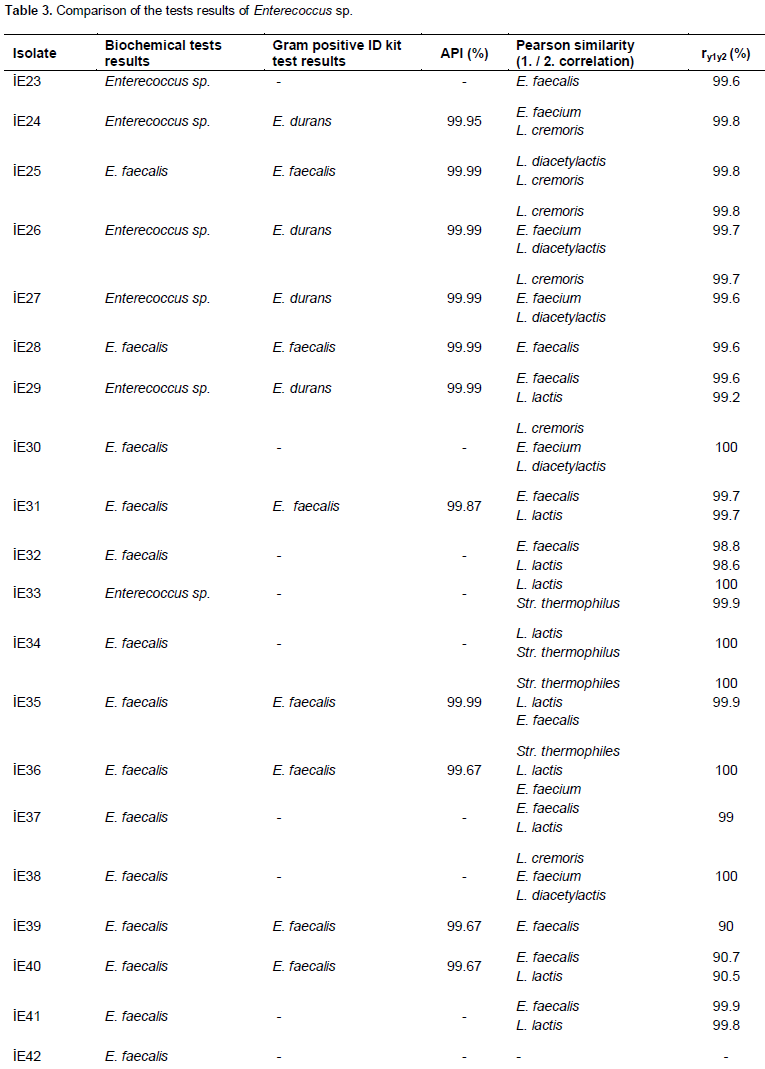 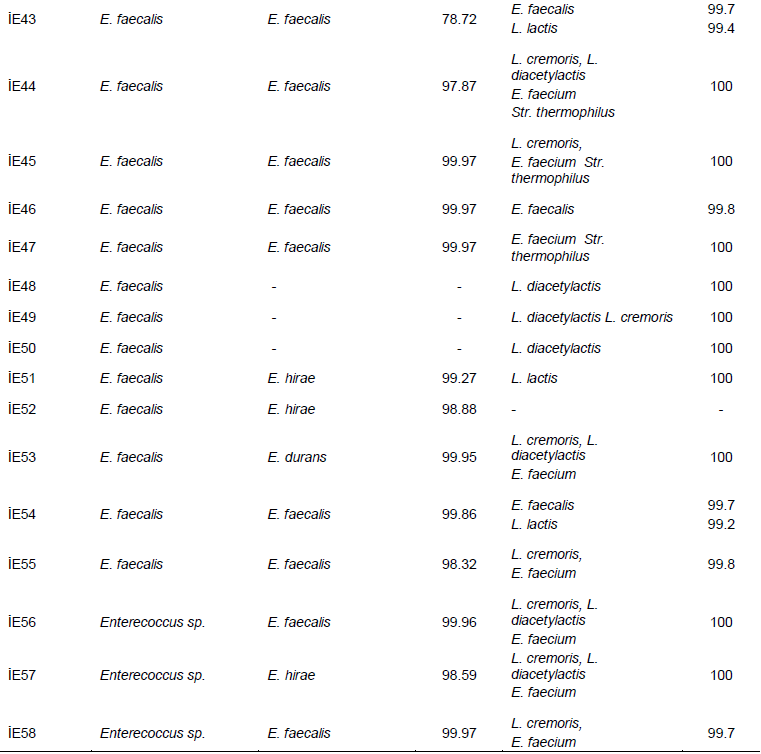 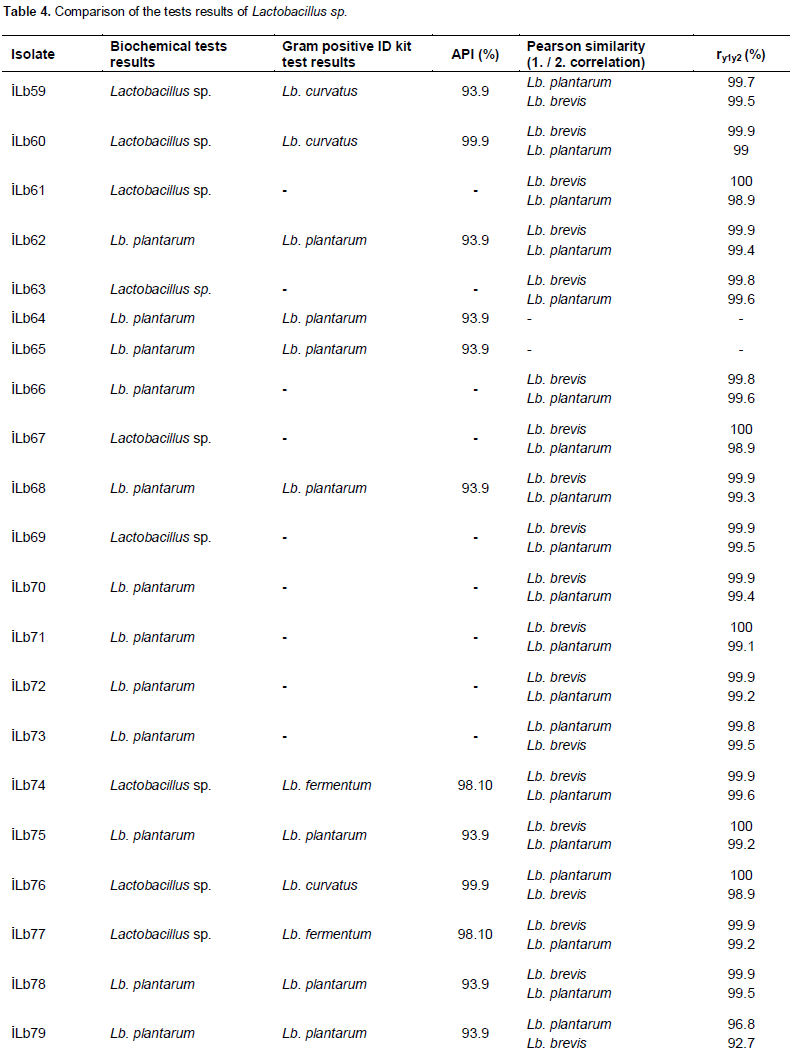 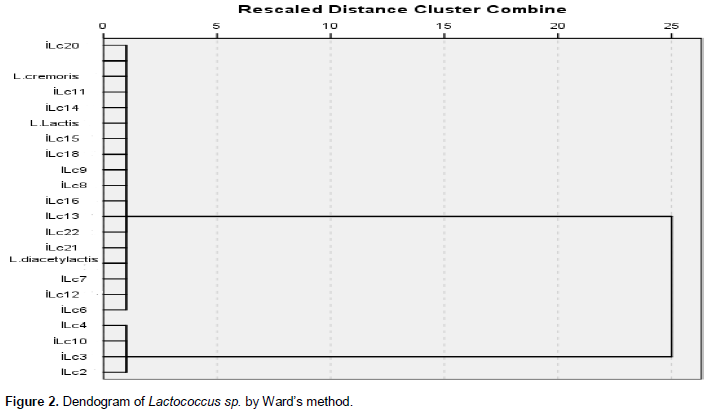 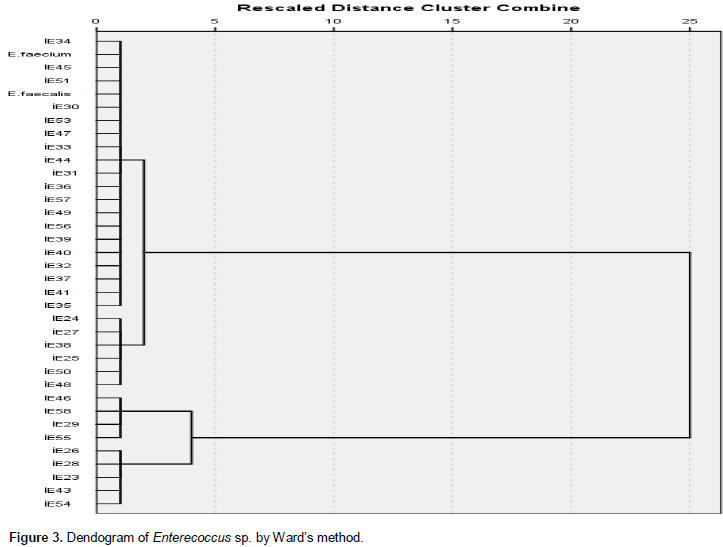 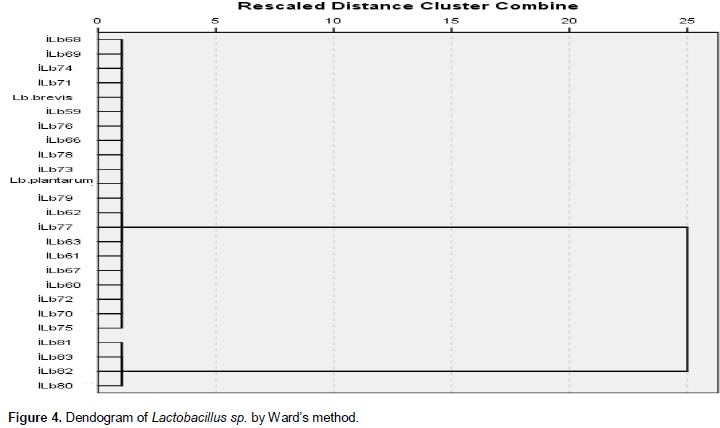 Naumann et al. (1990) could successfully cluster Staphylococcus, Streptococcus and Clostridium at species level, at the ranges of 3000 to 2800, 1200 to 900, 900 to 700 cm-1 by applying cluster analysis and Pearson Pearson correlation product moment coefficient. Naumann et al. (1990) also applied cluster analysis to Clostridium type bacteria at the range of 1200 to 900 and 1500 to 1200 cm-1 region. In our study, appropriate fingerprint regions of reference strains could not be used to determine the statistical analysis due to inadequate reference strains been difficult to separate species to subspecies due to similar genotypic structure of LAB species. In order to identify distinctive fingerprint regions of LAB species using FTIR spectroscopy, it is thought that particular species are needed to compare with more than one reference strains according to different studies. For this reason, identification at species level using FTIR spectroscopy was not successfully carried out.