In the present study, the isolation, purification and partial characterization of thermostable serine alkaline protease produced from Bacillus thuringinsis SH-II-1A was reported. The culture was isolated from soil of slaughter house waste and identified further from ribosomal sequence. The crude enzyme was purified by ammonium sulfate precipitation, dialysis and Sephadex G-200 gel permeation chromatography up to 17.04 fold with recovery of 8.47%. Relative molecular weight (67 kDa) of purified enzyme was observed by sodium dodecyl sulfate-polyacrylamide gel electrophoresis (SDS-PAGE). Maximum production of enzyme and cell biomass was observed for 48 h of incubation period at 45°C. Strong activity of enzyme was observed at pH 10 to 11; also stability of up to 2 and 20 h incubation at the same pH range confirms alkaline protease. Optimum temperature recorded for protease activity was 45°C, and 100% thermal stability up to 350 min of incubation was recorded. Among different natural substrates tried, casein was found as ideal substrate. Enzyme activity was strongly enhanced by metal ions like Ca2+, Mg2+ and Mn2+ whereas, 100% enzyme activity was inhibited by phenylmethylsulphonyl fluoride (PMSF), and up to 92% inhibition by diisopropyl fluorophosphates (DFP) confirmed serine protease. Detergent compatibility of the enzyme was studied in the presence of 10 mM CaCl2 and 1 M glycine at 45°C. This indicates 80 to 100% stability for a period of 0.5 to 2.5 h incubation. Improved washing performance and removal of blood stains from the cotton cloth was observed when detergent Surf excel was used with enzyme. Overall, the observed properties of isolated protease conclude its commercial application in detergent and leather industries.

Among the large number of microbial enzymes, proteases occupy a pivotal position owing to their wide applications. The current estimated value of the worldwide sales of microbial enzymes is $ 1 billion; proteases alone account for about 60% of the total worldwide sales (Immaculate and Jamila, 2014) and were the first enzymes to be produced in bulk (Beg et al., 2003; Ellaiah et al., 2003). Alkaline proteases are a physiologically and commercially important group of enzymes used primarily as detergent additives. They play a specific catalytic role in the hydrolysis of proteins. This enzyme accounts for 40% of the total worldwide enzyme sales. It is expected to be an upward trend in the use of alkaline proteases in the future (Adinarayana et al., 2003; Moreira et al., 2003). Proteases are used in laundry detergents for over 50 years to facilitate release of proteinaceous materials in stains (blood and milk) and account for approximately 25% of total worldwide sales of enzymes (Ahmed et al., 2011). Thermostable alkaline proteases are having application in detergent industry as additive (Lagzian et al., 2012)
In the present study, the authors produced protease enzyme from Bacillus thuringinsis SH-II-1A (Foda et al., 2013). The bacillus strain was obtained from natural source of slaughter house waste drainage soil of different locations (Joachim et al., 2008). Maximum growth of culture and production of enzyme was observed at 48 h of incubation period. Isolation and purification of the enzyme was carried out by sequential steps of ammonium sulphate precipitation, DEAE-cellulose dialysis and Sephadex G-200 gel permeation chromatography. Isolated protease enzyme was identified as serine type after maximum inhibition of enzyme activity by phenyl methyl sulfonyl fluoride (PMSF) and di-isopropyl fluoro phosphate (DFP). Maximum hydrolysis of casein as a substrate and maximum stability was observed at pH 10 to 11, which supports alkaline type protease. Proteolytic efficiency of the enzyme was observed at 45°C, which supports thermal stability of enzyme at higher temperature. Activity of enzyme was enhanced by the use of metal ions like calcium (CaCl2) supporting cofactor requirement.
Enzyme has shown greater compatibility and stability with commercial detergent formulations like surf excel up to 1.5 h of incubation. Improved washing performance and removal of blood stains from the cotton cloth was observed upon incubation of enzyme along with detergent powder. Molecular weight of the purified enzyme was up to 68 kDa estimated with SDS-PAGE and supported by gelatin zymogram activity. As it was desirable to search for new proteases with novel properties from as many different sources as possible, the present enzyme could become one of the ideal sources to fulfill all the required properties. Overall, the isolated protease enzyme could be considered as an additive for commercial detergent formulations. Commercially, it would have many industrial applications like hair removal property in leather industry, as a laundry additive in detergent industry, and breakdown of X-ray films to remove trapped silver particles. It would have therapeutic applications as a digestive aid, fibrinolytic agent, dissolution of blood clots and treatment of atherosclerosis in the future scope.

Identification of bacterial culture
The most significant characteristics of the isolate SH-II-1A are summarized: these are vegetative cells and characterized as large stout rods that are straight or slightly curved with rounded ends (Gopala, 2011). They usually occur in pairs or short chains. It is Gram positive, non-capsulated and motile with peritrichous flagella. Classification of B. thuringinsis strains has been accomplished by H serotyping the immunological reaction to the bacterial flagellar antigen (Ash et al., 1991). The hag gene encodes flagellin, which is responsible for eliciting the immunological reaction in H serotyping. This showed that the isolate belongs to the class of Bacillus sp.
Purification of extracellular protease of B. thuringiensis SH-II-1A
In B. thuringiensis, maximum growth and maximum enzyme production was observed at 48 h (Figure 1). Fermentation was carried out at 45°C and clear supernatant was separated from the cells by centrifuging at 5000 ×g for 15 min. Further supernatant was fractionated by precipitation with ammonium sulfate between 40 and 60% of saturation. All subsequent steps were carried out at 5 to 8°C. The protein mass obtained after precipitation was resuspended in 0.1 M Tris-HCl buffer, pH 10; it was dialyzed using diethyl amino ethyl (DEAE) cellulose membrane against the buffer having same composition in order to achieve desired purity of enzyme.  The protein pellet obtained after dialysis using DEAE membrane was loaded onto a column of Sephadex G-200 (1.5 × 65 cm) equilibrated with Tris-HCl buffer, pH 10. The elution profile of gel filtration chromatography is shown in Figure 2. Elution profile of column was monitored and it was observed that the protease enzyme was eluted in the form of well resolved single peak, showing casein hydrolysis (caseinase) activity coinciding with a single protein peak at a NaCl concentration of 0.6 M. 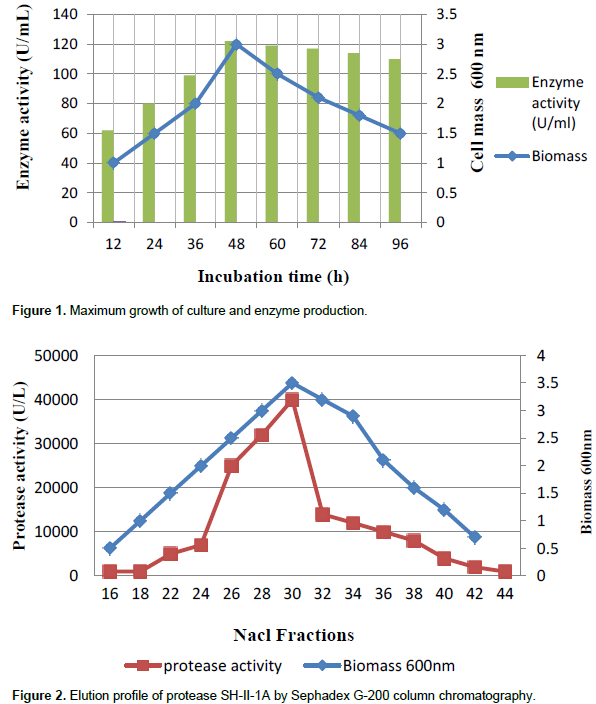 Eluted fractions sequence numbers (25 to 30) were observed with high protease activity. The summary of purification steps involved for alkaline protease is presented in Table 1 (Zhou et al., 2009; Fakhfakh et al., 2010). When the ammonium sulphate precipitation and purified protease was analyzed by SDS-PAGE, seven bands were observed in the presence of ammonium sulphate precipitation (Figure 3); while purified protease showed a single band on SDS-PAGE, indicating a homogenous preparation. The molecular weight of the protease was determined by comparison of the migration distances of standard markers protein. The molecular mass standards were bovine serum albumin (67 kDa), ovalbumin (45 kDa), carbonic anhydrase (30 kDa), trypsinogen (24 kDa) and α-lactalbumin (14 kDa) on SDS-PAGE. The molecular mass was determined by extrapolation from a linear semi logarithmic plot of relative molecular mass versus the Rf value (relative mobility). Depending on the relative mobility, the molecular weight of the protein band was calculated to be 68 kDa, which coincided with the band of bovine serum albumin (BSA) marker protein (Prashant et al., 2013). 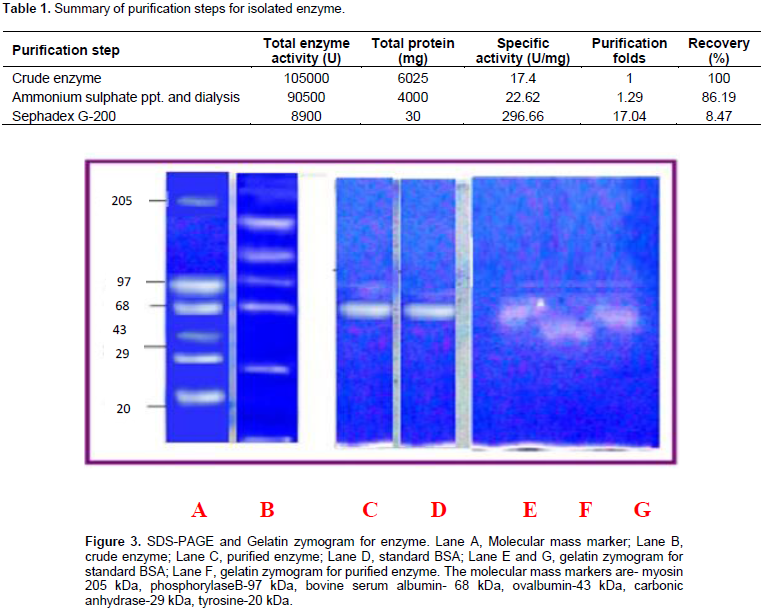 Characterization of purified enzyme
For the determination of the pH optimum, phosphate (pH 6 to 7), Tris-HCl (pH 8), and glycine-NaOH (pH 9 to 12) buffers were used in the absence and presence of 10 mM CaCl2. The highest protease activity was found to be at pH 10 to 11 using glycine-NaOH buffer (Figure 4). These findings are in line with several earlier reports showing pH optima of 10 to 10.5 for protease from Bacillus sp., Thermus aquaticus, Xanthomonas maltophila and Vibrio metscnikovii. The important detergent enzymes, subtilisin Carlberg and subtilisin Novo or BPN (Dhandapani et al., 1994) also showed maximum activity at pH 10.5. The stability of enzyme was checked at various pH 6 to 12. 100% stability was achieved at pH 9 to 11 for a period of 2 and 20 h incubation (Figure 5). The activity of the crude and purified enzyme was determined at different temperatures ranging from 35 to 65°C in the absence and presence of 10 mM CaCl2. 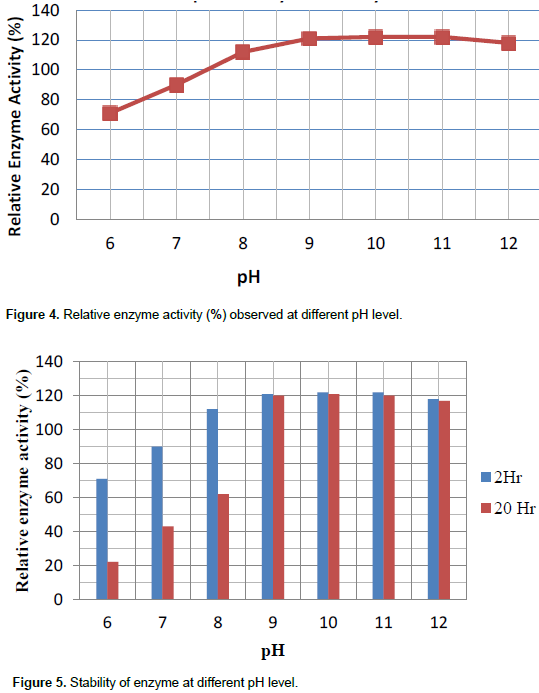 The optimum temperature recorded was at 45°C for protease activity. The enzyme activity gradually declined at temperatures beyond 50°C (Figure 6). A similar type of result was observed by other investigators where a maximum temperature of 55°C was recorded for an alkaline protease from Bacillus stearothermophilus AP-4 and 60°C for a protease (Jellouli et al., 2009) derived from Bacillus sp B21-2. The thermal stability of the purified protease was tested at different temperatures of 45, 50 and 55°C for different periods (50 to 350 min) in the presence of 10 mM CaCl2. The enzyme was almost 100% stable at 45°C even after 350 min of incubation (Figure 7). Previous reports on thermostability have shown half-lives of >200 min at 50°C and 2 to 22 min at 60°C for heat stable serine proteases, and half-lives of 3.4 and 2.4 min at 50°C have been recorded for subtilisin Carlsberg and subtilisin BPN, respectively. 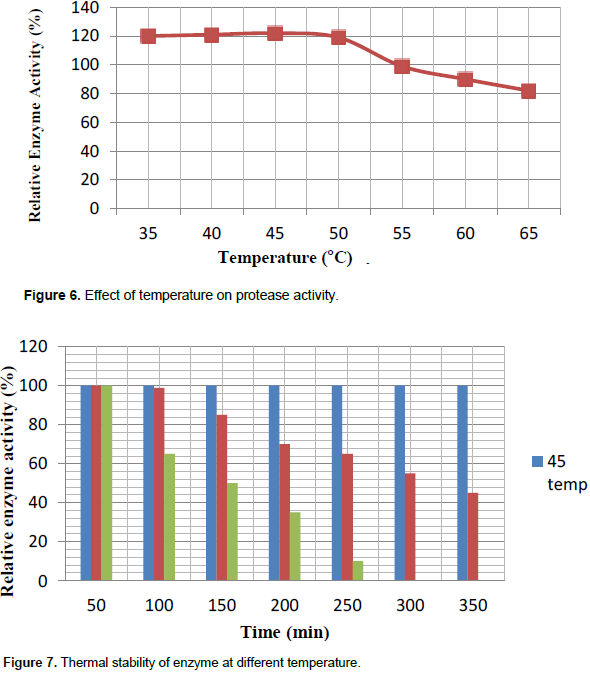 Effect of protease inhibitors on enzyme activity
Inhibition studies primarily give an insight into the nature of an enzyme, its cofactor requirements, and the nature of the active center. The effect of different inhibitors on the enzyme activity of the purified protease was studied. Among the inhibitors tested (at 5 mM concentration), PMSF was able to inhibit the protease completely, while DFP exhibited 94% inhibition. In this regard, PMSF sulphonates, the essential serine residue in the active site of the protease and has been reported to result in the complete loss of enzyme activity. Relative enzyme activity by different inhibitors is described in Figure 8. Our findings are similar to those of Tsuchida et al. (1986) where the protease was completely inhibited by PMSF. This indicated that it is a serine alkaline protease. Slight inhibition was observed with other inhibitors like iodoacetate, p-CMB and β-ME. 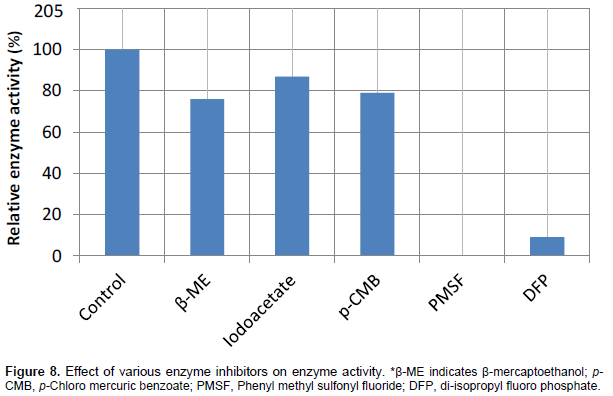 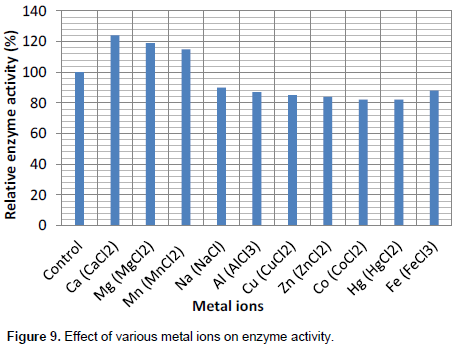 Hydrolysis of protein substrates
When assayed with native proteins as substrates, the protease showed a high level of hydrolytic activity against casein and poor to moderate hydrolysis of BSA and egg albumin; although the hydrolysis was hardly observed with gelatin (Figure 10) (Loops et al., 2003). 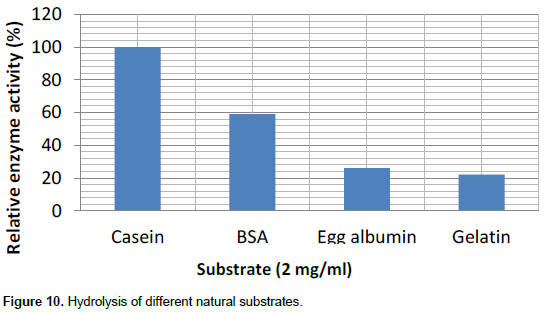 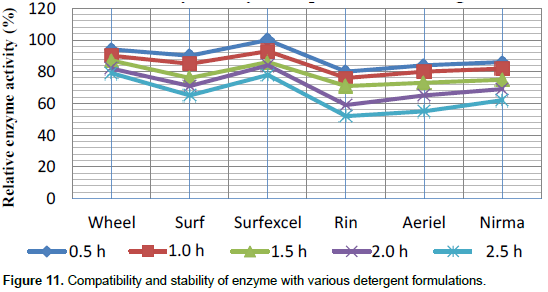 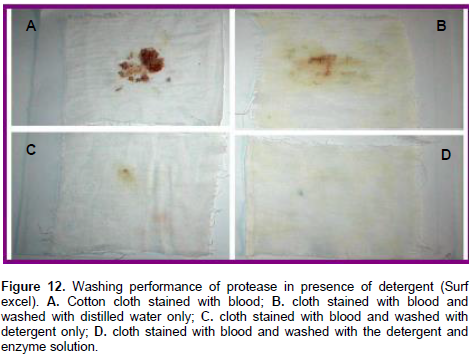 The alkaline protease isolated from B. thuringinsis SH-II-1A is a thermostable serine protease. It is stable at alkaline pH, at high temperatures, and in the presence of commercial detergents and is compatible with commercial and local detergents. These properties indicate the possibilities for use of the protease in the detergent industry. This enzyme can be exploited commercially.