Repeat breeder (RB) is a cow that fails to conceive from three or more successive insemination, but with normal estrus and absence of detectable clinical abnormalities. It is one of the major problems in dairy production. In the present study, the plasma biochemistry of Sudanese crossbred RB cows was examined. Plasma glucose, total cholesterol (TC), triacylglycerol (TG), total protein (TP) and urea nitrogen were estimated with the spectrophotometer while the plasma levels of Cu, Zn, Fe, and Mn were estimated using the atomic absorption spectroscopy. The results indicate the plasma levels of glucose, Zn, Mn and Fe of RB were significantly lower (P < 0.05) than that of the normal cyclic (NC) cows. Moreover, the plasma level of urea nitrogen of RB was significantly higher (P < 0.05) than that of the NC cows. According to the obtained results, it can be concluded that correcting the plasma glucose, Zn, Mn and Fe as well as lowering the urea nitrogen may be a part of an effective strategy for treatment of repeat breeding syndrome in Sudanese crossbred cows.

Repeat breeder (RB) cow is the one that cycles normally and with no clinical abnormality, but fail to conceive from three of more successive insemination (Gustafsson and Emanuelson, 2002). The economic loss associated with RB is high, and is due to the cost of insemination, decreased productivity and the losses due to the involuntary culling (Bonneville-Hebert et al., 2011). The good nutritional condition is vital to the animal health and reproduction. Changes in plasma biochemical or hematological parameters may be the cause of the reproductive insufficiency (Noakes et al., 2001). For instance, the blood glucose level was shown to be lower in RB than normal cycling (NC) cows and buffaloes (Guzel and Tanriverdi, 2014; Sabasthin et al., 2012). In addition, it has been reported that there are lower plasma cholesterol levels in RB than NC buffaloes and cows (Sabasthin et al., 2012; Amle et al., 2014). Nevertheless, Guzel and Tanriverdi (2014) have  reported  that  there  is no significant difference in blood cholesterol levels between the RB and NC cows. The plasma total protein TP was also estimated in RB cows and buffaloes in previous studies. However, the results were not consistent. It has been reported that there is no significant difference in the plasma TP levels between the RB and NC cows (Guzel and Tanriverdi, 2014; Kurykin et al., 2011). However, some studies have reported that the plasma TP of RB is significantly lower than that of the NC buffaloes and cows (Amle et al., 2014; Sabasthin et al., 2012). Moreover, the plasma urea was shown to be higher in RB than NC cows in previous studies (Kurykin et al., 2011; Sabasthin et al., 2012). Deficiencies of Mn, Cu, Fe and Zn have been associated with immune suppression, anemia, and poor fertility in dairy animals (Ingraham et al., 1987; Akhtar et al., 2014).
In the present study, certain plasma biochemical parameters of the RB have been examined and compared them with that of the NC crossbred cows in Khartoum State, Sudan. The crossbred cattle of Sudan are unique in being hybrids between Kinnana or Butana (local breeds) and the Holstein or Jersey. To the best of our knowledge, this study is the first one that has examined the Sudanese RB cow from a biochemical point of view. Therefore, it is probably helpful in treatment of the repeat breeding syndrome by correcting the plasma levels of glucose, Zn, Mn, and Fe, in addition to lowering the urea nitrogen.

Animals
This study has been approved by the research board of the Faculty of Veterinary Medicine, University of Khartoum. It was conducted at Khartoum State, in private dairy farms during the period from the first of April until the end of May 2015. Ninety dairy uniparous and multiparous lactating crossbred cows (Friesian or Jersey × Kenana or Butana). The age range from 5 to 8 years old and body condition score was from 3 to 3.5, according to the five-scale point system (Ahmed and Elsheikh, 2014). Cows were divided into two groups, each contains about 45 cows. The first group (group 1) is the RB cows. The RB cows were recruited according to the case history from the owners, farm records, visual diagnosis and by rectal examination as the RB cows had regular estrous, multiparous, young (3 to 12 years) without anatomical defects in the genital tract and free from vaginal discharges (Warriach et al., 2008). The second group (group 2) serves as a reference group including healthy NC cows.
Collection of blood samples
Ten milliliters of blood samples were collected from the jugular veins of RB and NC cows in anticoagulant-coated tubes. Four milliliters in sodium fluoride-coated tubes for estimation of glucose and 6 ml in EDTA-coated tubes for estimation of all others biochemical parameters. The tubes were transferred in an ice container to the laboratory. Cells were removed from plasma by centrifugation at 2000 rpm for 10 min. Plasma was stored at -20°C until further analysis. Blood glucose, total protein TP,  triacylglycerol TG, total cholesterol TC, and urea nitrogen were determined with the Spectrophotometer using commercial kits (Spinreact, Spain). The blood glucose was estimated using glucose oxidase method (GOD-POD, liquid kit). The plasma total protein was estimated using Biuret method (Biuret, Colorimetric kit). Plasma triacylglycerol was estimated using lipoprotein lipase method (GPO-POD, liquid kit). Plasma total cholesterol was estimated using cholesterol esterase method (CHOD-POD, Liquid kit). Blood urea was estimated using the urease method (Urease –GLDH, Kinetic UV kit). The plasma levels of Cu, Zn, Fe, and Mn were measured using the Phoenix -986 AAS Atomic Absorption Spectrophotometer.
Statistical analysis
The data were analyzed using the independent sample T test to compare means between the two groups. Result was expressed as mean ± standard deviation (SD); P-value ˂ 0.05 was considered as significant. The analysis process was done using SPSS version 22. 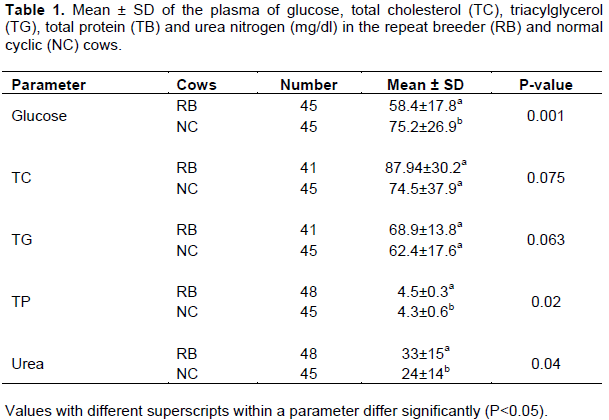 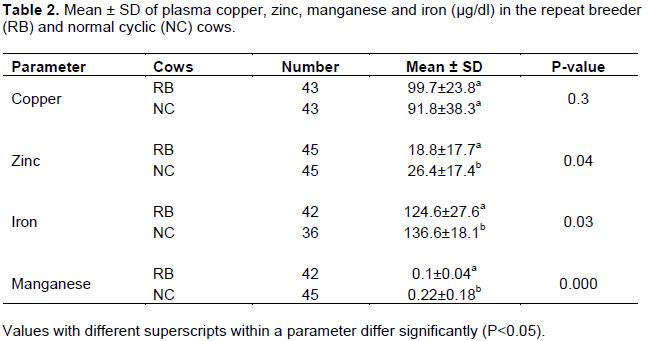 In the current study, the plasma biochemistry of crossbred Sudanese RB cows has been examined. The results demonstrate that the plasma glucose, Zn, Mn and Fe were significantly lower (P < 0.05) in RB than in NC cows. The plasma urea nitrogen of RB was significantly higher (P < 0.05) than that of the NC cows. It was hypothesized that correcting these biochemical parameters may be an effective strategy for the treatment of the repeat breeding syndrome, however, this hypothesis still needs to be tested in future studies.