Jatropha curcas Linnaeus, 1753 is a plant with several uses for communities in Cameroon and other African countries. However, present methods of detoxifying J. curcas kernel cake (JKC) to add value to its further utilization are too sophisticated for cottage operations in rural areas. This study sought to evaluate two auto-detoxification methods using the shellfish brine shrimp, Artemia salina (Linnaeus, 1758). Two identical J. curcas auto-detoxification apparatuses (JADA) were developed: one simulating diffuse daylight (DJADA) and the other solar irradiation (SJADA) conditions. JKC was pretreated by either soaking or boiling in water or lye. The pretreated samples were then placed in the JADA and either re-moistened to 66% dry matter (DM) or left un-moistened. Among the 14 pretreated samples, water soaked solar without re-moistening (WS1), lye soaked solar without re-moistening (LS1), and water soaked solar with re-moistening (WS2) had LC50 values above 1000 ppm after four weeks. On the other hand, un-moistened diffuse daylight spread (UDC), boiled in water and exposed to diffused daylight without remoistening (WD3), and un-moistened solar spread (USS) were the least detoxified within the same period of four weeks with LC50 values less than 60 ppm. Irrespective of the pretreatment, extracts from the SJADA had higher LC50 values when compared to that of DJADA. This finding suggests that sunlight is an important factor in auto-detoxification. The top three most efficient detoxified treatments: WS1, LS1 and WS2 are recommended for further development and testing with livestock and fish models. This study confirms that JKC is toxic, but under natural conditions is exposed to auto-detoxifying factors which are both endogenous and environmental. When these conditions are optimally manipulated, the detoxification rate is enhanced. Farmers in rural communities can use this strategy to detoxify JKC, transform it into livestock and fish dietary ingredient and consequently enhance its contribution to climate change mitigation.

The reality of climate change has encouraged a search for renewable energy sources. However, the cultivation of energy crops for biofuel production has resulted in an increased competition between food and fuel.  Therefore, renewable energy crops such as J. curcas L. which are not consumed by humans have gained interest (Devappa, 2012). As an endemic plant of tropical America, J. curcas is widely distributed throughout the tropics as an ornamental and medicinal plant. It produces high-quality biodiesel fuel after the appropriate processing of oil extracted from its seeds. The nutrient profile of the resultant J. curcas seed cake (JSC) or J. curcas kernel cake (JKC) surpasses the Food and Agriculture Organization of the United Nations (FAO) reference protein apart from lysine (Makkar et al., 1998). JSC is toxic to humans and animals even after its further processing. J. curcas can provide opportunities for additional income and therefore improve food security (Lyimo, 2010). To enhance the value of JKC, several methods have been proposed for its detoxification, such as: (1) solvent extraction methods (Chivandi et al., 2004; MartÄ±nez-Herrera et al., 2006; Makkar et al. 2008; Rachadaporn et al., 2012); (2) chemical treatment methods (Makkar and Becker, 1998; Haas and Mittelbach, 2000; Aregheore et al., 2003; Devappa and  Swamylingappa, 2008; Azza and Ferial, 2010); (3) bio-detoxification methods such as fungal detoxification (Belewu and Akande, 2010; Belewu et al., 2010 Azhar et al., 2014; Sulaiman et al., 2014), bacterial detoxification (El-Zelaky et al., 2011; Phengnuam and Suntornsuk, 2013; Widiyastuti et al., 2013; Chin-Feng et al., 2014) and ensilage (Oliveira et al., 2012); physical methods such as ionizing radiation (Runumi et al., 2014), ozonation and solar irradiation (Susan et al., 2015), heat (Workagegn et al., 2013), roasting (Azza and Ferial, 2010), germination (Azza and Ferial, 2010), soaking (Azza and Ferial, 2010), and boiling (Annongu et al., 2010; Fakunle et al., 2013; Alatise et al., 2014). All these methods are characterized by different levels of success. An improved efficiency is observed after the combination of two or more approaches. The challenge today therefore is not only the JKC detoxification to levels safe enough for animal consumption, but also whether the detoxification method can stimulate local interest by ensuring its biological, chemical, technical and economic feasibility for large scale industrial as well as cottage operations in rural communities of resource-poor countries like Cameroon.
The majority of the current successful detoxification methods is sophisticated and cannot be applied at a cottage industry level in rural communities where J. curcas, which has already several uses, is additionally expected to contribute in energy security and poverty alleviation. This fact poses limitations on its potential contribution to sustainable agriculture strategies, since climate activists suggest that 80% of current crude oil reserves should remain in the  subsoil  in  order  to  avoid the critical 2°C rise in global temperature. Easily applied methods such as boiling need further investigation, because phobol esthers (PE), the main toxic component in JKC, are heat stable. They remain in the JKC even when autoclaved at 121°C for 30 min (Aregheore et al., 2003). However, the naturally occurring phobol esters are unstable and are susceptible to oxidation, hydrolysis, transesterificaion and epimerization during isolation procedures (Runumi et al., 2014). By taking into consideration this background, an effort needs to be made to find an easy and cheaper method to detoxify J. curcas for rural communities in countries like Cameroon. The present study was therefore aimed to develop two J. curcas auto-detoxification apparatuses (JADA) and test their efficacy using brine shrimp lethality test. 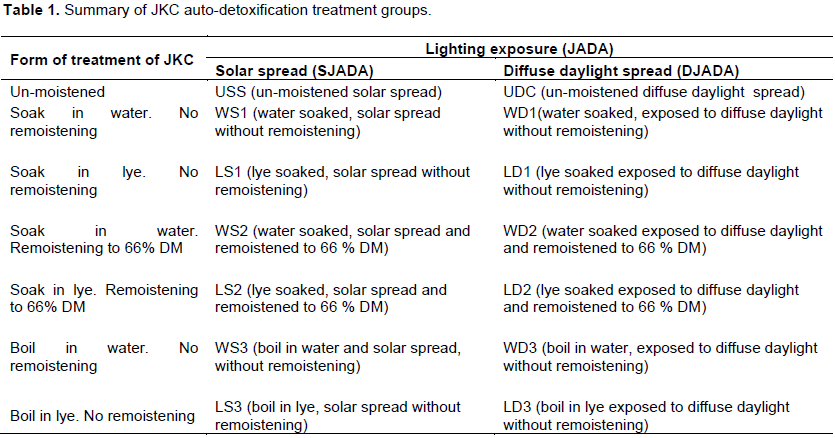 Assessment of the level of detoxification of JKC by performing the brine shrimp lethality test
Preparation of crude methanol auto-detoxified J. curcas kernel cake extracts (CMJKCE)
Forty grams of each treatment sample (10 g per replicate) were collected weekly to assess the level of auto-detoxification. The four replicates per treatment were pooled and further dried within the JADA for another week. Each sample was homogenised, powdered and 20 g of it were mixed with 200 ml of methanol for 72 h with regular  agitation.  Filtration  using  Whatman  No. 541  filter  papers followed and the CMJKCE were obtained by complete evaporation of the solvent using a rotary evaporator.
Brine shrimp bioassay
The brine shrimp lethality test (BSLT) as described by Meyer et al. (1982) was used to test toxicity of CMJKCE after some modifications. The toxicity is reported as LC50 values in mg/ml (ppm). Brine shrimps [Artemia salina (Linnaeus, 1758)] were hatched from eggs in rectangular dishes divided by a perforated barrier, under constant aeration using natural seawater. The perforated barrier divided the dish into two chambers. The bigger chamber receiving the eggs was in the dark while the smaller chamber receiving the hatched nauplii in anticipation was under constant light. Forty eight hours were allowed for the eggs to hatch and the photropic nauplii to mature. Ten nauplii were collected using a pipette and placed in marked vials, each containing 4 ml of natural seawater.  Two hundred miligrams of each examined CMJKCE were dissolved in 2 ml of pure dimethyl sulfoxide (DMSO) to get a solution of 100,000 ppm (100,000 mg/l). A unit volume of this solution was diluted in one mililitre of natural seawater to give a concentration of 50,000 ppm. Ten-fold serial dilutions were further performed in sea water to produce concentrations of 5000, 500, 50 and 5 ppm. One milliliter of each of these dilutions was delivered into pre-marked vials containing 4 ml of natural sea water and 10 nauplii. As a result, the final concentrations of CMJKCE were 10,000, 1000, 100, 10 and 1 ppm. Three replicates of each concentration were prepared for CMJKCE samples. The negative controls were dilutions of DMSO in seawater without CMJKCE. Un-detoxified whole J. curcas kernel cake served as the positive control. The vials were kept incubated under light for 24 h after which the surviving nauplii were counted. The nauplii were counted against a lighted background using a 3× magnifying hand lens. They were considered dead if they lay immobile at the bottom of the vial.  The mortality percentage was then calculated. The mortality data was corrected using Abbott’s (1925) formula (Apu et al., 2013), since a mortality percentage more than 10% was recorded in the controls. Subsequently there were corrections for 0 and 100% as proposed by Ghosh (1984). The formulae used in calculating and correcting brine shrimp mortality are presented in Table 2: The surviving nauplii were killed by addition of 5 ml of 5% v/v phenol to each vial. The vials were crosschecked to ensure that all the nauplii were dead before discarding.

Determination of 50% lethal concentration (LC50)
The lethal concentration of CMJSCE resulting in 50% mortality of brine shrimp (LC50) was determined from the 24 h counts by a plot of percentage of the shrimps killed against the logarithm of the CMJKCE concentration. The best-fit line was obtained from the curve data by means of regression analysis (MS Excel version 7) and the LC50 was derived from the slope of the best-fit line obtained.
Statistical analysis
Levene's test for equality of variances and t-test for equality of means were performed on LC50 using the IBM SPSS Statistics version 22 (IBM Corp. Released 2013). The mean (±SEM) were quarreled.
Selection of the most promising auto-detoxified JKC (ADJKC) treatments for further development
Selection of the most promising  ADJKC  treatments  was  achieved by ranking the LC50 from the largest to the smallest values with the largest values indicating the least toxicity. A t- test was used to compare the LC50 of ADJKC from the SJADA and DJADA to determine the significance of solar radiation in auto-detoxification of JKC at an experimental level.

The level of auto detoxification of the different experimental groups has been ranked using the mean of the LC50 values for all the treatments from weeks 1 to 4 (Table 3). From the results presented in Table 3, WS1, LS1 and WS2 treatments all had LC50 values above 1000 ppm after four weeks of exposure in the JADA, indicating that they were the most detoxified. On the other hand UDC, WD3 and USS were the least detoxified within the same period of 4 weeks with LC50 of less than 60 ppm. The extent of lethality was found to be proportional to the concentration of the CMJKCE. High mortality rates were recorded at 1000 and 10,000 ppm, while lower values were recorded at 1 and 10 ppm. Mortality rates of brine shrimp exposed to whole J. curcas kernel cake just after oil extraction are presented in Figure 1. Thereafter, corrected brine shrimp mortality rates in  the  4th week  for UDC, WS1, LS1 and WS2 are presented in Figures 2 to 5, respectively. 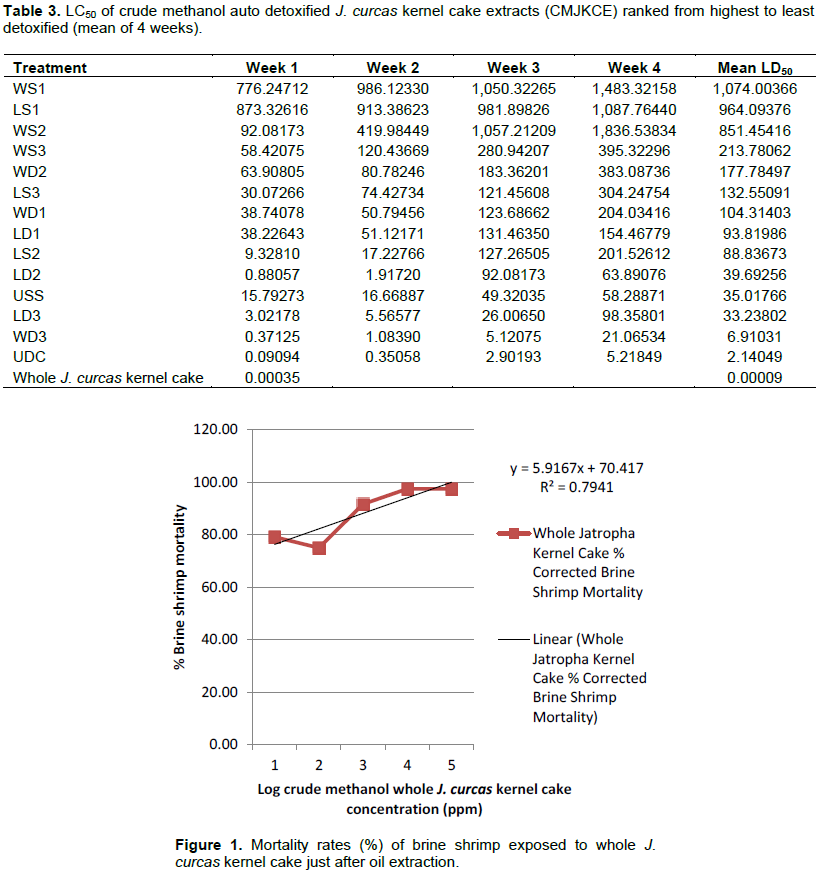 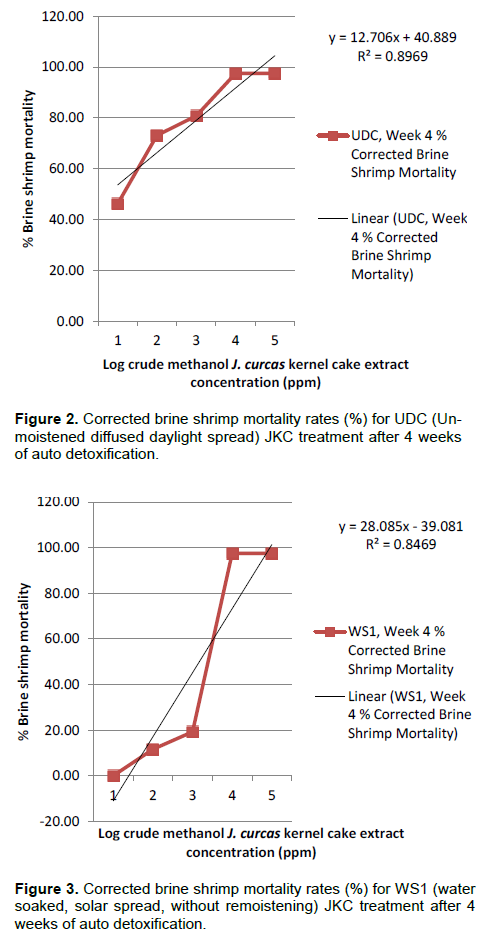 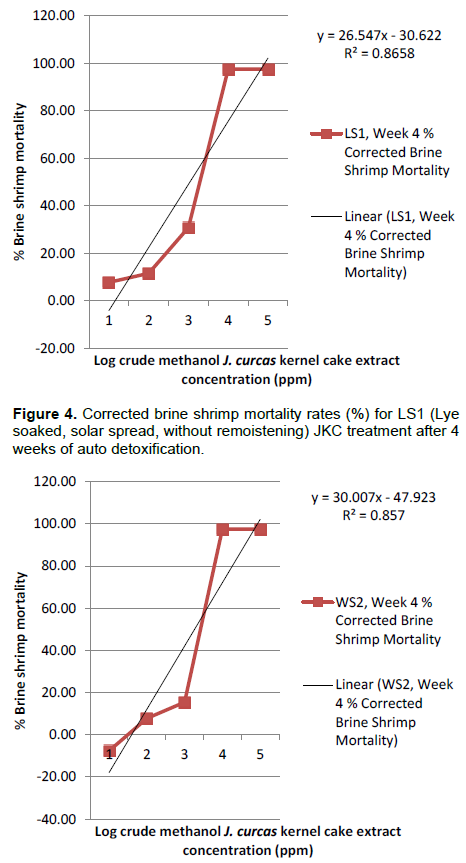 The means (and standard error of the means) of the LC50 of the extracts of solar and diffused daylight detoxified JKC extracts over the four week detoxification period are presented in Table 4. Irrespective of the pretreatment, SJADA treated extracts had higher LC50 values compared to the DJADA ones, with the WS1, LS1 and WS3 having significantly higher values (P<0.05) compared to WD1, LD1 and WD3 groups, respectively (Table 4).

This study has confirmed that JKC is quite toxic. However, under natural conditions, it is exposed to auto-detoxifying factors which are both endogenous and environmental. When these conditions are optimally manipulated as in the SJADA, the detoxification rate is enhanced. Solar radiation plays an important role in auto detoxification process of JKC. Farmers in rural communities can use this strategy to detoxify JKC, transform it into animal feed and consequently enhance its contribution to climate change mitigation. The role of microbial succession in auto-detoxification needs to be further investigated. Although the BSLT is rather inadequate in identifying the toxic ingredients in ADJKC, it is useful to determine the level of detoxification. The top three most detoxified treatments: WS1, LS1 and WS2 are recommended for further development and testing as livestock and fish dietary ingredient.