A fungal endophyte, Ramichloridium cerophilum, was identified as a Class 2 endophytes species obtained from the leaf of common sowthistle (Sonchus oleraceus L). This fungus was found to grow endophylically in the roots of Chinese cabbage seedlings. Light microscopy of cross-sections of colonized Chinese cabbage roots showed that the fungus penetrates through the outer epidermal cells, grows further into the inner cortex, and colonizes the cortical tissue. Isolates of R. cerophilum 28L-9 have shown the ability to increase biomass of a nonmycorrhizal plant, Chinese cabbage. This finding is the first report of R. cerophilum could help to improve nonmycorrhizal plant.

The mycorrhizal symbiosis between plants and fungi is common and most plant species are dependent on this symbiosis for improving the productivity and sustainability, including current forest and agricultural systems (Toro and Delaux, 2016). The fungal symbiont generally aids the growth of the plant partner by improving nutrient uptake (Toro and Delaux, 2016), while reducing fertilizer use and pollution in the environment, which is important with relevance to agriculture and ecology. Chinese cabbage is an important and widely cultivated vegetable in East Asian countries, especially Japan, Korea and China, because of its rapid growth and is an  economically  important  cash  crop  as  well  as  an efficient food crop (Haque et al., 2016; Kang et al., 2010). However, members of the Cruciferae including this major commercial crop, Chinese cabbage, are known as non-mycorrhizal plants and other types of fungal symbionts were rarely found in these plants (Gilliam, 2016; Nouri and Reinhardt, 2015).

Endophytic fungi are defined as the endosymbionts that live within the plant intercellular and intracellular spaces for atleast part of their life cycle without causing apparent harm to their host (Rodriguez et al., 2009). Unlike mycorrhizal fungi that colonize plant roots and grow into the rhizosphere, endophytes reside entirely within plant tissues and may grow within roots,  stems  and/or  leaves (Carroll, 1988; Stone et al., 2004). In nonclavicipitaceous endophytes (NC-endophytes), Class 2 endophytes may grow in both above- and below-ground tissues; by contrast, Class 3 and 4 endophytes (dark septate endophytes, DSE) are restricted to above-ground tissues and roots, respectively (Rodriguez et al., 2009). Class 2 endophytes have a broad host range of both monocot and eudicot plants and are the largest group of fungal symbionts and are readily culturable on artificial media and are thought to colonize all plants in natural ecosystems (Petrini, 1996). Studies have shown that they could increase host shoot and/or root biomass, possibly as a result of the induction of plant hormones by the host or biosynthesis of plant hormones by the fungi (Tudzynski and Sharon, 2002). Class 2 endophytes were the focus of this study which is distinct from the other NC-endophytes because in general they colonize roots, stems and leaves.

Dark septate endophytes (class 4 endophytes) Heteroconium chaetospira, Phialocephala fortinii, Meliniomyces variabilis and Veronaeopsis simplex which had been isolated from evergreen rainforests in Japan; and recent studies showed that beneficial traits toward Chinese cabbage, including nitrogen provision, growth promotion, and disease suppression could be associated with these isolates (Usuki and Narisawa, 2007; Khastini et al., 2012, 2014). Based on these findings, it was hypothesized that class 2 endophytes population in this area may be also diverse and there might possibly be more non-described species. In order to prove this hypothesis, key class 2 endophytes species were isolated from tissues of different naturally grown plant species. Here, the features of the selected key class 2 endophytes species that were effective in supporting the growth of a non-mycorrhizal plant, Chinese cabbage were described. 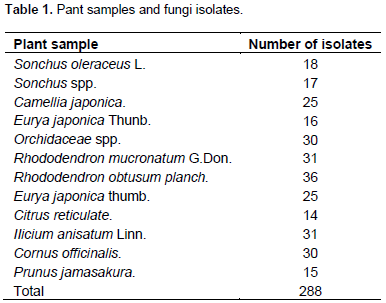 In order to distinguish non-pathogenic fungi from pathogenic and other saprotrophic fungi, 13 isolates were selected based on their morphology as representative from different groups of fungi, and the priority was given to slow-growing isolates that usually start developing after at least 7 to 10 days of incubation. The endophyte screening on selected isolates was carried out after growing the fungus in 6-cm Petri dishes filled with oatmeal medium [Oatmeal, 10 g L-1; Bacto agar, 18 g L-1] enriched with nutrients [MgSO4﹒7H2O (Wako Chemical Ind., Osaka, Japan), 1 g L-1; KH2PO4 (Wako Chemical Ind., Osaka, Japan), 1.5 g L-1; NaNO3 (Wako Chemical Ind., Osaka, Japan), 1 g L-1], 4 replicate plates per fungal isolate. After the plates were largely covered by fungal colony, disinfected 2-day-old seedlings of Chinese cabbage c.v. W4107 (Watanabe Seed, Miyagi, Japan) were transplanted (three per plate) onto the growing fungal colony and placed into a sterile plastic pot and incubated for two weeks at 23°C with 18 h:6 h (L:D) and 180 mol m-2 s-2 light intensity. Negative impact of the fungal isolates was evaluated using a 0 to 3 scale (0: no visible symptom; 1: lightly yellowing leaves; 2: lightly yellowing leaves and smaller plants; 3: or death) (Mahmoud and Narisawa, 2013). Assessed plants were harvested and oven-dried at 40°C for 48 h. The dry weight of treated plants on per plate was taken and compared with the control plants. Four plates seedlings (twelve seedlings) were measured per isolate.

The mean dry biomass of each treatment was calculated and analyzed with one-way analysis of variance (ANOVA) and Duncan’s multiple range test of SAS systems for Windows (version 8.02, SAS Institute Inc., Cary, NC, USA) was used to analyze the data.

Non-pathogenic isolates were evaluated for the ability to colonize Chinese cabbage. Root, stem and leaf segments, up to 1 cm in length taken from the same set of plants were surface sterilized using the protocol described in the fungal isolation. Roots were observed after washing, cross sectioning, and staining with 0.005% cotton blue in 50% acetic acid and examined under an Olympus BX51 microscope with UPlanFI40/0.75 and UPlanFI100/1.30 objectives to assess colonization levels.

Two hundred eighty eight fungal isolates were successfully obtained from 540 leaf, stem and root segments cutting from 12 plant species. The frequencies of fungal isolation from these different tissues were 70.0, 77.6 and 61.0%, respectively. The dominant isolated fungi were species of Pestalotiopsis (72.8%), Colletotrichum (12.1%) and Phomopsis (8.9%). They are mostly isolated within 4 to 7days of placing root segments on the medium. Ramichloridium cerophilum was isolated from the leaf of common sowthistle (Sonchus oleraceus L.), it is a class 2 endophytes and able to symbiosis with plant and promote its growth.

To eliminate saprotrophic and/or pathogenic fungal isolates, 13 fungal isolates showing diverse morphology were used for endophyte screening. Compared to non-treated control plants, three of the isolates (approximately 2.7%) were not pathogenic to the Chinese cabbage seedlings. The plant biomass of 10L-4, 18R-10 and 28L-9 treatments showed no significant difference compared to the control (Figure 1) and no typical disease symptoms on Chinese cabbage growth. The isolates 10L-4 and 28L-9 were obtained from leaves, while 18R-10 from roots. Among three isolates, 28L-9 stimulated the seedling growth, with average biomass (64.5±8.2 mg) increasing 16.8% compared to control (55.2±4.2 mg) (Figures 1 and 2). Most of the tested isolates (over 97%) were pathogenic to Chinese cabbage with a negative impact index ranging from 1 to 3. 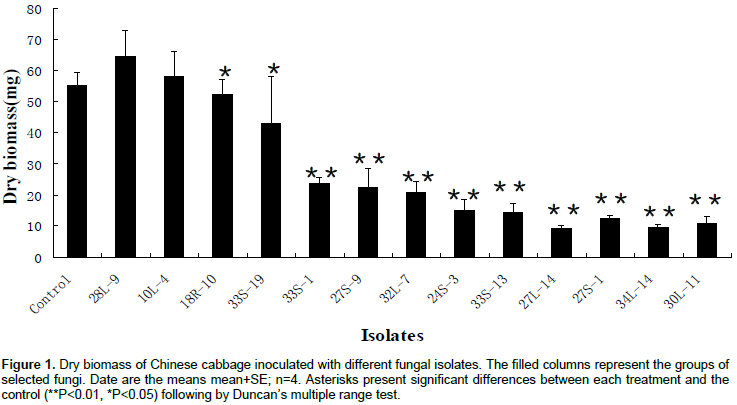 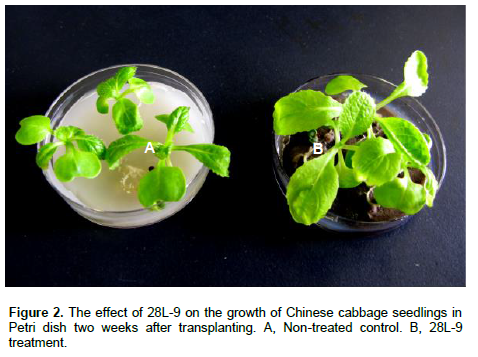 Isolate 28L-9 was isolated from the leaf of common sowthistle (Sonchus oleraceus L.), its colonies were dark olivaceous grey with sharp margins on CMMY medium. They grew relatively slowly on the medium and reached around 30 mm after 2 weeks at 23°C (Figure 3). Hyphae were pale olivaceous-brown, smooth or verruculose, 2.0 to 3.4 (2.6 mean) μm wide. Conidiophores sometimes branched, arising from creeping aerial hyphae, smooth or verruculose, hardly tapering towards the apex, 2.1 to 3.3 (2.6) μm wide, 17 to 70 (44) μm long, mostly with 4 septa but ones with up to 10 septa have been observed (Figure 4). Conidiogenous cells are integrated, terminal, proliferating sympodially, rachis is short, straight and crowded, prominent, pigmented with non-thickened scars, minute, approximately 0.5 μm in diameter Conidia solitary, fusiform to clavate, thin-walled, smooth, 0 to 1-septate, subhyaline, 3.2 to 12.8 (7) × 2.0 to 4.2 (2.8) μm. 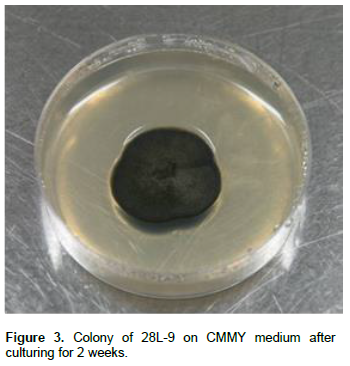 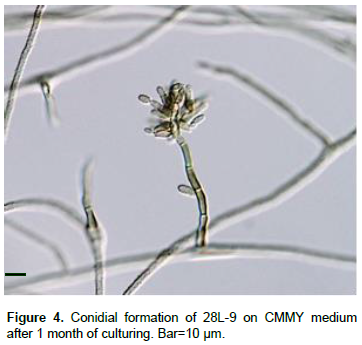 Based on the result of the molecular analysis, the isolate was affiliated with R. cerophilum EU041798.2 with 98% of similarity in 18S rDNA sequences. The sequence was deposited in GenBank at NCBI with accession number FJ514548. Isolate 28L-9 was identified as R. cerophilum based on the comparison of morphological characteristics (Arzanlou et al., 2007) and on the molecular analysis of the 18S rDNA sequences.

The re-isolation rate of 28L-9 from inoculated root tissues was consistently 100%. This result indicated that R. cerophilum was able to colonize root of Chinese cabbage without causing damage to the host plant. Roots inoculated with isolate 28L-9 showed pigmented hyphae of the isolate that grew mostly intercellularly, but also intracellularly in epidermal and inner cortical cells. However, the fungal hyphae were not observed in the vascular bundle. No visible sign of host reaction was seen in response to the colonization  by  the  isolate,  and the fungus external generally grew out of the root into the medium (Figure 5). 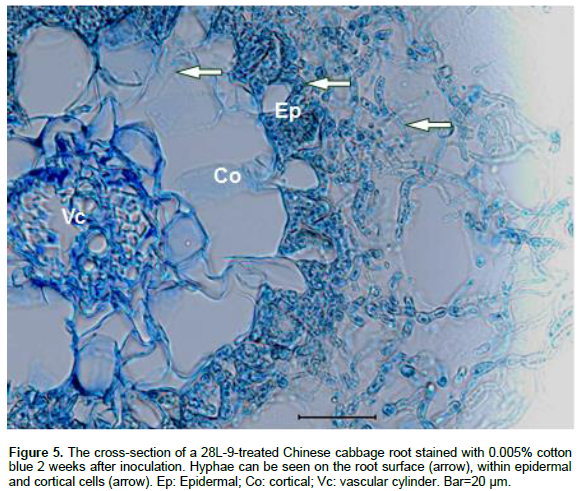 Only one isolate of R. cerophilum species was recovered during this study, representing an isolation rate of 0.11% among the  total  number  of  fungal  isolates.  It  was  yet impossible to estimate its abundance, but this finding indicates that there are undescribed endophyte species that can be found in evergreen rainforests areas in Japan. Improved isolation media and protocols may enhance the recovery rate of this fungus, but the overall results of the study were comparable to those of previous studies in Japan using the same baiting method that discovered the endophyte H. chaetospira at 4.0% (Mahmoud and Narisawa, 2013). Fast-growing endophyte such as P. fortinii and Leptodontidium orchidicola with colony diameter reaching above 80 mm after 30 days on PDA (Currah et al., 1987) might be easier to recover as the probability of their obscuration by fast-growing fungi would be lower.

Endophytes are known to be able to colonize host tissues intracellularly and extracellularly without causing substantially negative impact (Diene et al., 2010). Depending on the fungal species involved, different responses have been observed with the host tissues. Hetroconium chaetospira, for example, when applied to Chinese cabbage colonized both epidermis and cortical layers, but was not observed in the vascular cylinder (Morita et al., 2003). Whereas P. fortinii can penetrate the vascular cylinder in addition to epidermal and cortical cells, consequently inducing undesirable effects on host plants under certain environmental conditions (Yu et al., 2001). The root colonization by R. cerophilum can be inter- and intra-cellular, and is limited to the epidermal and cortical layers, causing therefore no visible symptom or disruption to the growth of host plant. The potential environmental impact on the behavior of this endophyte is unknown but based on its inability to grow into the vascular tissue and on the lack of symptom in colonized host tissues; it is believed that this fungus has a low risk to be a plant pathogen. In the current study under controlled-environment conditions, however, R. cerophilum did not form any typical mycorrhizal structures in host plant, but hyphae of the fungus greatly grew along the surface of the root and colonized the epidermal layer. Although the abundance and ecological behavior of R. cerophilum under natural conditions in different habitats has not been studied. Our preliminary data indicate that the ability of this endophytic nature to produce varying amounts of surface hyphae on the root tissues of the plant seems essential to their ability to promote host plant growth.

This finding indicates that there are undescribed endophyte species that can be found in evergreen rainforests areas in Japan. This study found for the first time that R. cerophilum is a class 2 endophytes and is able to promote growth of a non-mycorrhizal plant, Chinese cabbage.

This work was supported by a Grant-in-Aid for Scientific Research (B) (No. 20380176) from the Japan Society for the Promotion of Science (to K.N.) and part of this work was also supported by the projects from China National Natural Science Foundation (No. 31460016). The authors are   grateful   to   Emeritus  Professor    S.   Tokumasu, University of Tsukuba, Japan for providing valuable suggestions for the fungal identification. They are also grateful to Dr. G. Peng, Agriculture and Agri-Food Canada, Saskatoon Research Centre, Canada, for critically reviewing the manuscript.