Soil fungi such as Trichoderma, Rhizopus, Aspergillus and Penicillium, that have strong biocontrol activity which produced chitinases and glucanases which have been studied extensively. In Sri Lanka, current estimates suggest that there could be as many as 25,000 of fungi species, of which only a little more than 2,000 are presently known (Karunarathna et al., 2012). Having special environmental  characteristics  and  being  rich  in soil fungi populations, the mycology of Sri Lankan soil has not been well explored, constituting an excellent source for the search of new strains. The soil samples used in this study were collected from a range of locations in Sri Lanka (9 districts) including natural forests, a compost heap, chitin bated soil, market garden and from rubber plantations.
Chitin and β-1,3-glucan selective media were used to isolate soil fungi, that produced chitinases and glucanases. The importance of β-1,3-glucanase (EC 3.2.1.39) and chitinase (EC 3.2.1.14) as key enzymes responsible for pathogenic fungal cell and sclerotial wall lysis and degradation has been reported (EL-Katatny et al., 2000). Therefore, use of chitinase and glucanase producing micro organisms as biological control agents against many fungal pathogens has been reported.
Most of the previous investigations indicated that, Trichoderma species are the best biocontrol agents among other soil fungi (Bell et al., 1982; Elad and Kapat, 1999; Ramezani, 2009). However there is still considerable interest in searching for new biocontrol fungi isolates especially in Sri Lankan soil which has not been well explored although it is known to be rich in biodiversity. By considering all these facts, the present study was undertaken to explore Sri Lankan soil, to isolate fungi that have strong biocontrol activities with high chitinase and β-1,3-glucanase production.

In this study, 83 chitinolytic and glucanolytic fungi were isolated from soil samples, collected from different locations in Sri Lanka, using chitin and glucan based selective media. Out of 83, 48 were isolated from glucan selective medium and 35 were isolated from chitin selective medium.
According to the results, the highest percentage of isolates was obtained from the natural forests (Figure 1). Out of 83 isolates, 22 showed biocontrol activity against seven pathogenic fungi in dual culture plate assay. They produced inhibition zones with  pathogenic  fungi  colony, mycelia degradation and in some cases coiling structures were observed when examined under the microscope (Figure 2). 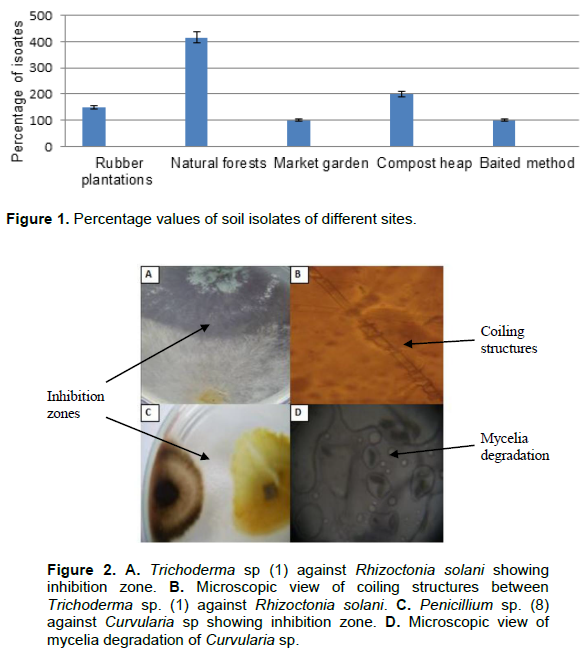 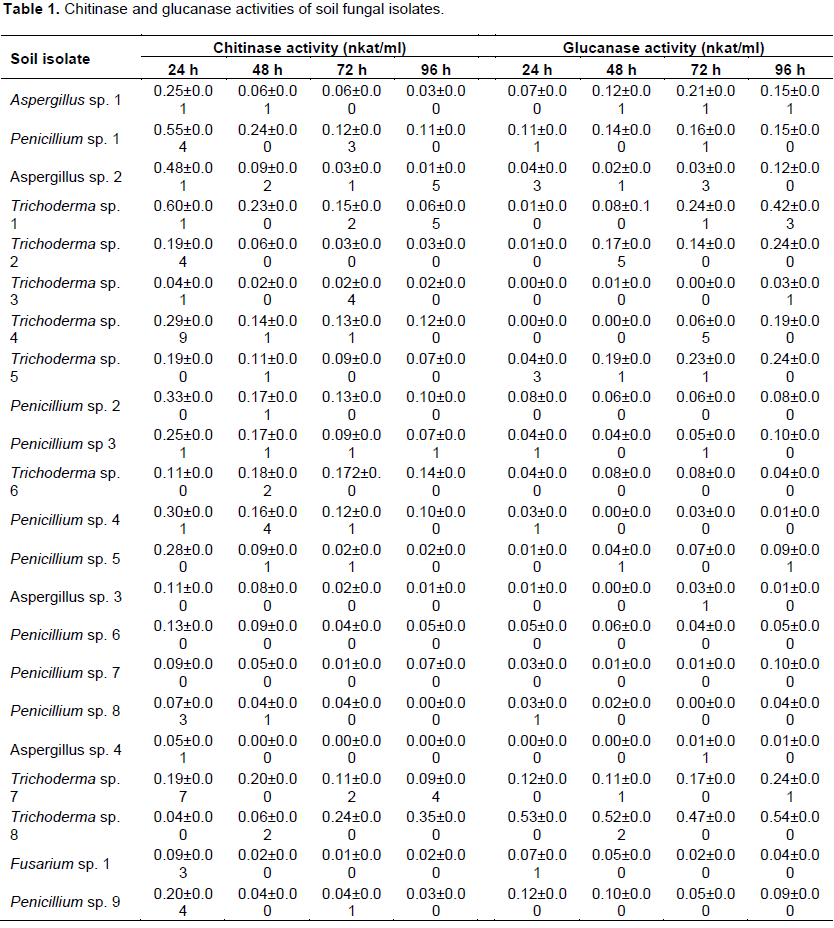 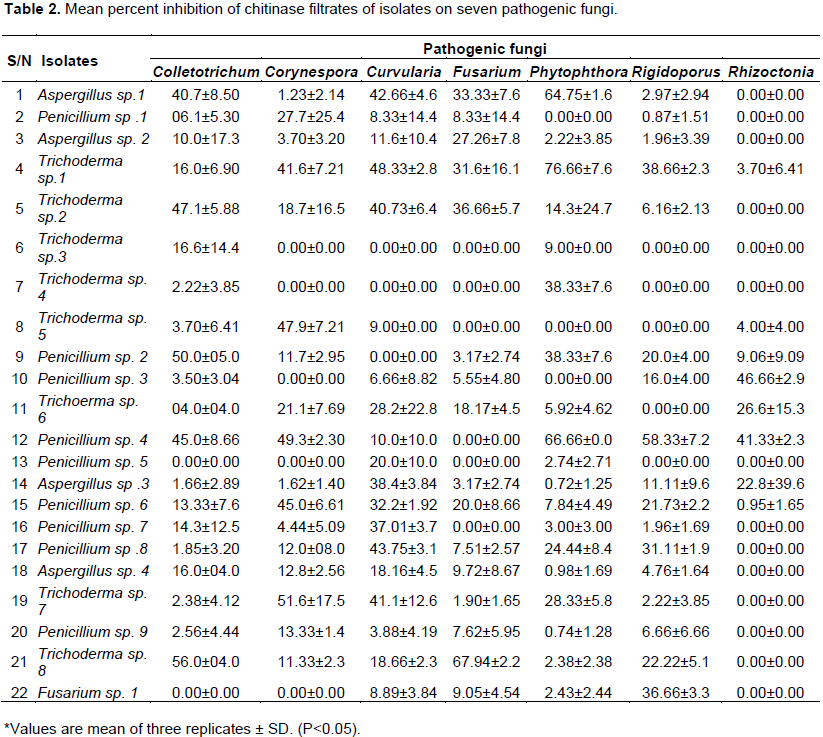 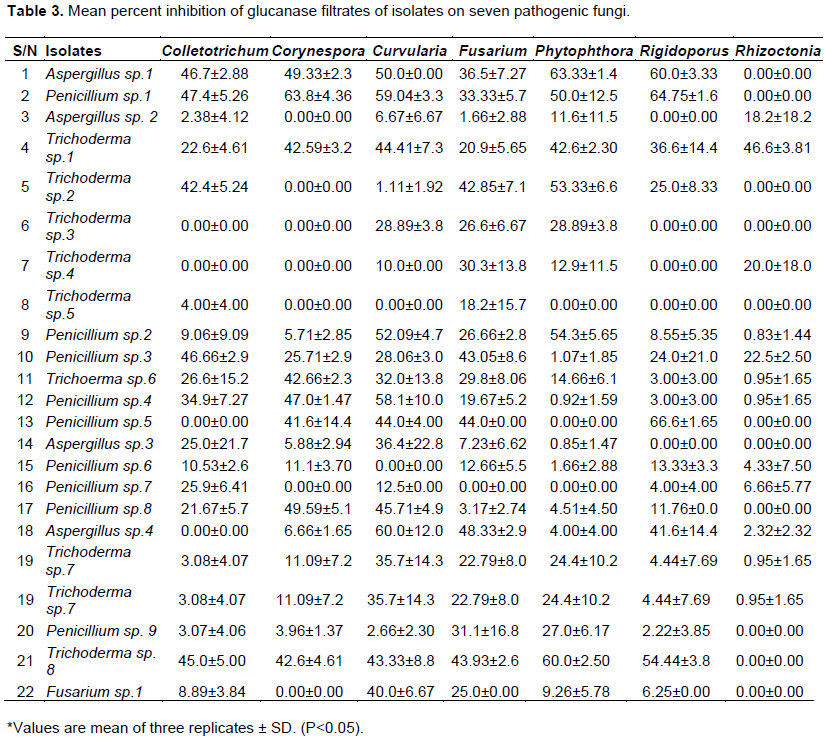 In this study, soil samples collected from five different locations in nine districts of Sri Lanka were explored for fungi of interest and a baited strategy was tested to enrich the soil flora for fungi of interest.
Initially, 83 pure cultures were obtained from different locations. Out of 83, 35 were isolated from chitin selective media and 48 were isolated from glucan selective media. Highest percentages (416.66%) of isolates, with prominent biodiversity were obtained from natural forests soil samples. This may be due to high content of nutrients and adequate moisture in forest soil. Among them, only seven isolates evidence biocontrol activity in dual culture plate assay. These include two Aspergillus species, two Trichoderma species, two Penicillium species and one Fusarium species. Only Trichoderma species showed the coiling structures around mycelia of R. solani while other isolates showed only the inhibition zones between the two colonies.
Compost samples are rich in organic material that provides nutrients to the soil. Second highest percentage (200%) of isolates, was obtained from compost samples. However none of the isolates had any biocontrol activity. All twelve isolates (148%) obtained from soil samples of rubber plantations (seven Penicillium species, three Trichoderma   species    and   two   Aspergillus  species), revealed high biocontrol activity during initial screening test. Those include seven Penicillium species, three Trichoderma species and two Aspergillus species.
Baiting method was proved to be a productive method for enriching the surrounding soil flora, for chitinolytic and gluconolytic species (Severgnini, 2006). Only two Trichoderma species were isolated from having biocontrol activity. Agricultural soils are often subjected to fungicides and fertilizers and these contain very low fungal population. Hence, the market garden yielded the lowest number of isolates with one Trichoderma species having biocontrol activity.
The results of this dual culture test clearly suggested that out of 83 isolates, 22 showed biocontrol activity against pathogenic fungi. There are nine Penicillium species, eight species of Trichoderma, 4 species of Aspergillus and 1 species of Fusarium. Hence, these 22 isolates were selected to carry out further analysis. According to the enzyme assay results, T. erinaceum (Trichoderma sp 1) showed significantly high activities for both enzyme assays. Production of chitinase using a medium containing colloidal chitin reached a maximum after 24 h of growth for all isolates and decreased thereafter.
In contrast, synthesis of β-1,3-glucanase increased rapidly after 96 h peaking at the fourth day for most of isolates.  These  results  are   accordance   with  previous studies (EL-Katatny et al., 2000; Matraudi et al., 2009; Sharaf et al., 2012).
The results of both assays and the two well diffusion tests indicated that, T. erinaceum (Trichoderma sp. 1),  T. virens (Trichoderma sp. 5) and T. asperellum (Trichoderma sp. 8) can be used as an efficient biocontrol agents against all tested fungal pathogens, especially against R. solani and P. meadii which showed high mean percent inhibition values on them. In this study, some Aspergillus and Penicillium species acted as biocontrol agents while Trichoderma species acted best as reported by several workers earlier.
Chitinolytic and glucanolytic fungi showed great variations towards cell wall degradation, ranging from weak to strong antifungal activity depending on inherited characters. Most studies revealed that T. harzianum is among the most potential species of Trichoderma that are commonly used for phytopathogen control (Jayalakshmi et al., 2009; Muhammad and Amusa, 2003; Lorito et al., 1998; Shabir et al., 2012).
In this study, T. erinaceum (Trichoderma sp 1), T. virens (Trichoderma sp 5) and T. asperellum (Trichoderma sp. 5) were found to be highly active isolates among 83 soil isolates. It is revealed from the present study that the ability of the above selected Trichoderma species to control pathogenic fungi especially R. solani and P. meadii may be due to chitinase and glucanase production. These observations were in close resemblance with previous studies such as that of Lorito et al. (1998), Ramezani (2009) and Sharma et al. (2014). Trichoderma spp. employs several mechanisms to combat pathogens by competition for space and nutrients, secretion of cell wall degrading enzymes (chitinases and gucanases), induction of resistance etc. (Rifai, 1969).
In both well diffusion tests, boiled enzymes were used as controls. The results suggest that proteins in the suspension were likely to affect the growth of pathogens. In this study, purified enzymes were not used. If purified, enzymes were used for better inhibitions which may be obtained. Lorito et al. (1994) reported that, incubated plant pathogens such as R. solani, Ustilago avenae, Uncinula necator with Trichoderma harzianum purified endochitinase, found complete inhibition (100%) of hyphal elongation.
However understanding the antagonistic mechanisms used by Trichoderma species on a wide range of pathogens is important in optimizing their use as biocontrol agents.  It is also important to collect information about the effect of temperature of fungal filtrate enzyme activity, elements in supernatant and incubation time on the inhibition of pathogenic fungi growth.