Bacillus spp. are dominant microflora in animal probiotics because they are Gram-positive, strict or facultative aerobe and endospore-forming bacteria (Chantawannakul et al., 2002). It was generally recognized that probiotics strains should be isolated from the gastrointestinal tracts (GIT) of their  host.  Such  strains  were  claimed to  have higher chance of survival and colonization in the intestine, which allow beneficial microbiota to thrive (Quigley, 2010). However, EU-authorized probiotics for animals were often not of intestinal origin (Nguyen et al., 2015).
According to  previous  studies,  Bacillus  subtilis  could biodegrade aflatoxins B1 and ochratoxin A via biotransformation (Yu et al., 2015; Petchkongkaew et al., 2008). Thus, it could be directly applied in the feedstuffs and feeds (Gao et al., 2013). It also exhibited antimicrobial activity and high resistance to the simulated gut environment. In addition, B. subtilis ferments roasted soybean, wheat bran, fruit waste via solid state fermentation (SSF) for production of the novel fermented soybean, haloduracin and citric acid (Park et al., 2012; Danesh et al., 2013; Kumar et al., 2003).
Astragalus was used as supplementary forage supplement for livestock and poultry industry in China, because it contains polysaccharides, saponins, flavonoids, anthraquinones, alkaloids, amino acid, β-sitosterol and metallic elements (Ibrahim et al., 2013; Sun et al., 2013; Li et al., 2009). Recent literatures reported that crude extracts of Astragalus are observed to be anti-inflammatory (Kim et al., 2013), immunostimulant (Qin et al., 2012), antioxidative (Kim and Yang, 2005), and antiviral in isolated constituents (Kallon et al., 2013). Astragalus was fermented by lactic acid bacteria (LAB) using solid state fermentation (SSF) technology. This technology is superior to crude Astragalus (Sheih et al., 2011) due to its production of a wide range of antimicrobial substances such as organic acids, hydrogen peroxide and bacteriocins which could kill other microbes (Rolfe, 2000).
Even though literature has reported this based bio-transformation technology to determine the effects of B. subtilis, the use of B. subtilis on Astragalus effects has not been reported in literature. To the best of the authors’ knowledge, this is the first investigation of B. subtilis from pig gastrointestinal tracts ferment Astragalus. It is significant to study the interaction between Astragalus and B. subtilis, producing in-feed antibiotic growth promoters (AGP) of livestock and poultry industry.

Bacteria source and biochemistry experimentation
B. subtilis strains HNMY-13 and HNMY-15 were isolated from pigs’ gastrointestinal tracts in Henan province of center of China. HNMY-13 and HNMY-15 isolates were grown on LB (Luria-Bertani) agar (Beijing Aoboxing Bio-tech company limited) at 37°C. Strains that were able to form spores on LB agar after 48 h were selected for further characterization. Further identification was achieved by performing the following tests: anaerobic test, Voges-Proskauer (VP) test, nitrate reduction test, amylohydrolysis, citrate utilization test, D-mannitol test, L-arabinose test, salt tolerance (7% NaCl in LB), growth at 37 and 42°C, and pH 5.7.
DNA extraction and 16S rRNA analysis
The bacterial isolates were  grown  overnight  in  LB  agar  at  37°C, then subjected to DNA extraction with bacterial genomic DNA miniprep kit (Suolaibao science and technology company, Beijing, China) according to the manufacturer’s instructions. The genomic DNA is used as a template for PCR (94°C for 30 s, followed by 30 cycles at 94°C for 30 s, 55°C for 30 s, 72°C for 90 s and a final extension at 72°C for 10 min). The forward and reverse primers used to amplify the partial 16S rRNA sequence were 5‘-CGCG GATC CCCA ATGA TATA GGTA AAAC-3’ and 5‘-CCGG AATT CTTA ATAG CTGT TACT TTGT-3’, respectively. PCR reactions were performed in a triplicate 50 μL mixture containing 25 μL of PCR mix, 13.5 μL ultrapure water, 2 μL of primer 1 (10 μM), 2 μL of primer 2 (10 μM) and 7.5 μL of template DNA (0.2 ng/µL). Obtained sequences were compared with sequences in the GenBank non-redundant nucleotide database by BLAST analysis. Phylogeny was inferred from aligned nucleotide sequences of the 16S rRNA genes using MEGA6 software.
Optimization of fermentation parameters of B. subtilis HNMY-13 and HNMY-15 strains in aflatoxin B1 degradation
To determine the optimal parameters for degradation of aflatoxin B1 by HNMY-13 and HNMY-15 strains, culture conditions for aflatoxin B1 degradation were studied at different temperatures (25, 30, 32, 35, 37 and 40°C), pH values (5.0, 6.0, 7.0 and 8.0) and incubation periods (24, 36, 48, 60 and 72 h). Fermentation was carried out in a 500 mL Erlenmeyer flask containing 100 mL of medium inoculated with 100 μL of the spore suspension of the two strains (1.5×106 CFU·μL-1) and incubated in an orbital shaker at 200 rpm. After the fermentation, 900 μL fermented liquid was collected from different treatment groups into a 1.5 mL sterile centrifuge tube and 100 μL AFB1 (Aflatoxin B1) standard substance (400 ng·mL-1, Suolaibao science and technology company, Beijing, China) was added to each tube. A tube with only fermentation medium was set up as the control. Then, the AFB1 residual content was determined using ELISA kits (Yisenbao biotechnology company, Beijing, China). The degradation rate can be described by the following formula: the percentage degradation of AFB1 = [1-(content after processing AFB1)/control group content]×100%.
Bacillus subtilis strains fermented Astragalus
Preparation of Astragalus concentrated solution
Astragalus was obtained from a central Chinese medicine market (Yuzhou, Henan, China). Astragalus (100 g) was taken and five-, three- and double-fold amount of water was added to boil three times, each time for 30 min. After boiling for three times, the filtrate was merged for 15 min by centrifugation (5000 ×g). The supernatant liquid was concentrated to 1 g·mL-1 by rotary evaporators. This suspension was later used as supplement for fermentation media.
Liquid fermentation
For the HNMY-13 and HNMY-15 strains, the LB medium was supplemented with 0.1, 0.3, 0.5, 0.7, 0.9 and 1 g·L-1 Astragalus concentrated liquid, respectively. Then they were inoculated with 106 CFU·g-1 of B. subtilis HNMY-13 and HNMY-15. The cultures were incubated at 37°C for 24 h under aerobic shaking condition. The samples were taken for further analysis.
Microbiological analysis (total viable bacterial count)
Total viable bacterial counts were determined after the fermentation. The fermented liquid (1 mL) was mixed with 9 mL of sterilized physiological saline (0.85% NaCl). Serial dilutions were prepared in the sterilized physiological saline and 1 mL of liquid with appropriate concentration was poured in triplicate plates for the total viable bacterial count. Prepared test samples (1 mL) with the concentration of 10-7, 10-8 and 10-9 dilution were transferred into sterile Petri dishes in triplicate. The warmed (45±2°C) sterile plate containing LB agar (15 mL) was mixed with the inoculums. Cultures were incubated aerobically at 37°C for 48 h. The colonies were then counted and expressed as logarithmic colony forming units per gram (log CFU·mL-1) of the sample.
The Astragalus polysaccharides yield analysis
The fermented liquid was added to 95% ethanol (3 times volume) for 24 h, and then collected for centrifugation at 5000 ×g for 20 min. The precipitate was dried at 60°C and smashed into powder. The yield of polysaccharides in extracts was determined using the phenol-sulfuric acid method.
Statistical analysis
Data was expressed as mean±standard error of mean (S.E.M.). Statistical analysis was performed using GraphPad PRISM software version 6.0 (GraphPad Software, USA). A Two-way analysis of variance (ANOVA) with the step-down multiple-stage F post hoc test (Ryan-Einot-Gabriel-Welsch multiple F-test P=0.05) was performed to distinguish treatment mean differences. 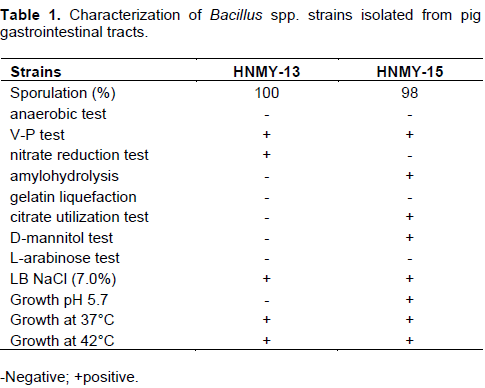 PCR reaction and 16S rRNA analysis
The results of the PCR of the HNMY-13 and HNMY-15 strains are presented in Figure 1. The length of nucleotide sequences of the two strains was 1500 bp. The strains were assessed by 16S rRNA sequencing and BLAST analysis to determine species identity. Analysis of the phylogenetic relationship based on 16S rRNA sequences is presented in Figure 2. It also revealed that the HNMY-13 andHNMY-15 strains were closely related to B. subtilis. The use of 16S rRNA sequences to  identify the species of bacteria has been successfully applied in modern microbiology, which could improve the accuracy of identification of the strain. 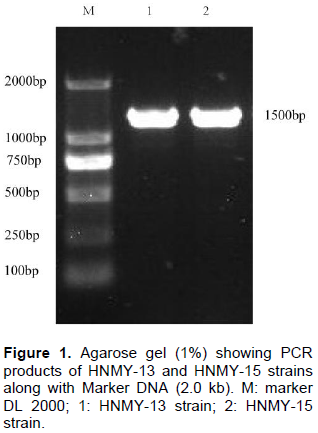 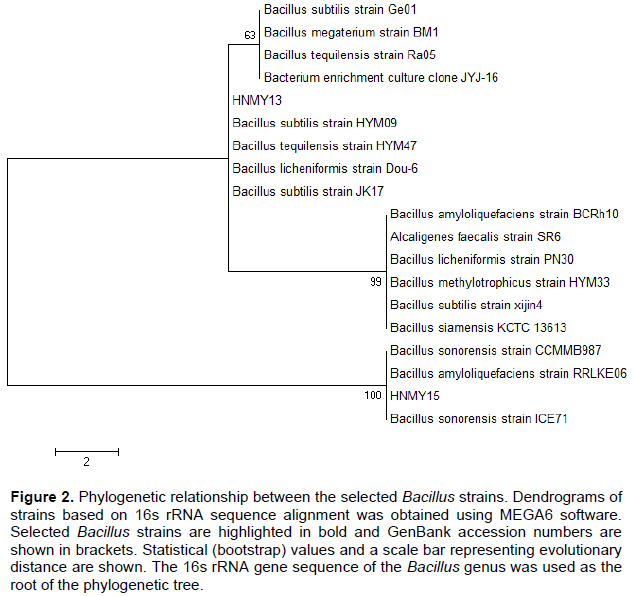 Microbial counts during fermentation
Microbiological monitoring of the fermented Astragalus co-inoculated with individual B. subtilis HNMY-13 and HNMY-15, respectively, was done. As shown in Figure 4A, the population of B. subtilis reached the peak in Astragalus amount at 0.5 g/L. The viable count of sample fermented was 8.8 ×108 CFU·mL-1 and 7.6×108 CFU·mL-1, respectively. The result indicated that Astragalus might increase the population of B. subtilis under appropriate dosage. It was reported that B. subtilis natto-fermented Astragalus if fermented medium contained 10 g Astragalus (Hsu and Chiang, 2009). In this study, it was found that fermented medium containing 0.5 g could promote B. subtilis counts. This result revealed that Astragalus provided necessary polysaccharide, peptide and amino acid, such as glycine, valine, leucine, glutamic acid, tryptophan and isoleucine which were beneficial to B. subtilis reproduction. The result of this experiment was in line with previous studies (Gobbetti et al., 2010).

The author declares that there is no conflict of interest.