Biodegradation and toxicity of waste from anaerobic fermentation of stillage

Several studies have been carried out to produce biofuels by anaerobic digestion of stillage from ethanol fermentation. This type of process, known as ABE Fermentation, generates by-products such as acetone, butanol and ethanol. This fermentation can use pure or mixed cultures of anaerobic bacteria, mainly of the genus Clostridium. In this context, there is the need for deeper studies for proper disposal of the residue resulting from Anaerobic Fermentation of ethanolic stillage, hereinafter referred to as AF stillage (stillage from Anaerobic Fermentation), obtained after this fermentation. Thus, the aim of this study was to evaluate the biodegradation and toxicity of stillage from Anaerobic Fermentation. The biodegradation of AF stillage in soil samples in the presence and absence of commercial inoculum was evaluated using a respirometric method described by Bartha & Pramer, according to the standard NBR 14283 (ABNT, 1999). The production of CO2 was evaluated for 57 days. Additionally, quantification of microorganisms was carried out at the beginning and end of the experiment. Toxicity tests were performed with the microcrustacean Daphnia similis using raw AF stillage and leachate from the respirometry test, according to the standard NBR 12713 (ABNT, 2009). The results of the respirometry test showed that, after 13 days of incubation, the biodegradation efficiency of all samples was above 30%. Using the Friedman statistical test, results showed  that adding the inoculum caused no statistically significant difference in the biodegradation of AF stillage. The acute toxicity tests were performed on raw AF stillage and on the leachates showed that toxicity was removed after biodegradation in soil at all concentrations used. Thus, discharge of AF stillage into soil is an alternative viable disposal.

Anaerobic fermentation (AF) stillage
The AF stillage is the residue or stillage generated by anaerobic fermentation of ethanol stillage. It was obtained from the Sanitation Laboratory of the Faculty of Agricultural Engineering (FEAGRI/ UNICAMP) and resulted from acetone-butanol-ethanol (ABE) fermentation intended for the production of alcohols and organic acids. For this fermentation, synthetic culture medium was used (Monot et al., 1982 modified by Santos, 2015), supplemented with ethanol stillage and molasses, as well as 1 N NaOH for pH control.
The AF stillage was centrifuged to remove the bacterial biomass. Afterwards, the supernatant recovered was subjected to rotoevaporation in a Marconi rotary evaporator (MA-120) to eliminate the solvents produced during fermentation (acetone, butanol and ethanol). The pressure necessary for the evaporation of the three solvents in a water bath at a temperature between 45 and 50°C (over 404 mm Hg) was taken into account. The AF stillage was then heated at 80°C for 15 min.
The physicochemical properties of the stillage used in this study was characterized according to APHA (1998, 2012) and are shown in Table 1. 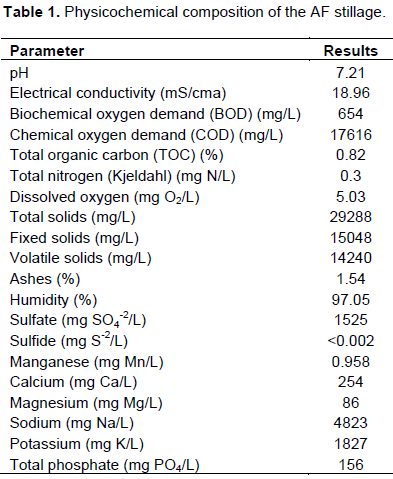 Soil sample
The soil used in the respirometry test was collected according to the technical rule L.6.245 from Cetesb (1984), in the geographic coordinates: Latitude -22.39624915/Longitude -47.5431633, localized in  the municipality of Rio Claro, in the State of São Paulo, Brazil. These samples were taken from the soil superficial layer of non-contaminated places. Tables 2 and 3 show the physico-chemical characteristics of soil. 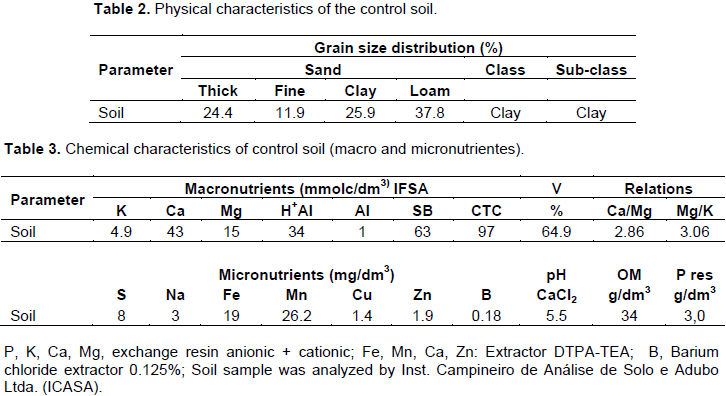 Microbiological analysis of biodegradation test
Heterotrophic bacteria and fungi in the respirometer samples were quantified at the beginning and end of the test. The quantification was performed by plating on Plate Count Agar (PCA) containing actidione (5 ppm) and Sabouraud broth containing chloramphenicol (400 ppm), respectively. Bacterial counts were carried using pour plate technique, and plates were incubated at 35°C for 48 h. Counts for yeasts and molds were performed by spread-plating, and plates were incubated for 5 days at 28°C. The results are  given  in  CFU/g
of dry soil.
The same procedure for microbial quantification was carried out for the commercial inoculum and AF stillage. The results obtained are expressed as CFU/ml.
Toxicity tests
Leachates from the samples in the respirometers were prepared at the beginning and end of the test, at a concentration of 10% in distilled water. The solutions were stirred in a shaker for 30 min and then decanted for 7 days, at room temperature. The supernatant was used in acute toxicity tests with the microcrustacean D. similis according to the standard NBR 12713 (ABNT, 2009), as well as raw AF stillage.
Statistical analysis
The Friedman test (Zar, 1999), which is a nonparametric test, was used to analyze the results from the respirometric biodegradation test and the quantification of microorganisms. The level of significance was 5%. The results of the toxicity tests with D. similis were calculated from statistical analysis carried out by the Trimmed Spearman-Karber method using the software JSPEAR (Hamilton et al., 1977).

Biodegradation test
The occurrence of biodegradation was observed in all respirometers, which was evidenced by the production of CO2. It was observed that microbial activity was not affected by the addition of AF stillage, since the amount of  cumulative  CO2    increased  as  the   concentration  of residue (AF stillage) increased (Figure 1). The statistical analysis of the data on the daily production of CO2 (µmol) using the Friedman test revealed that adding the inoculum did not cause significant differences (with a significance level of 5%) as compared to control soil and AF stillage at the concentrations of 6 and 12% (P-values of the probability tests: p=0.13, 0.78 and 0.98, respectively). There was statistical difference only between soil with 3% AF stillage and the same sample supplemented with inoculum (p=0.047). 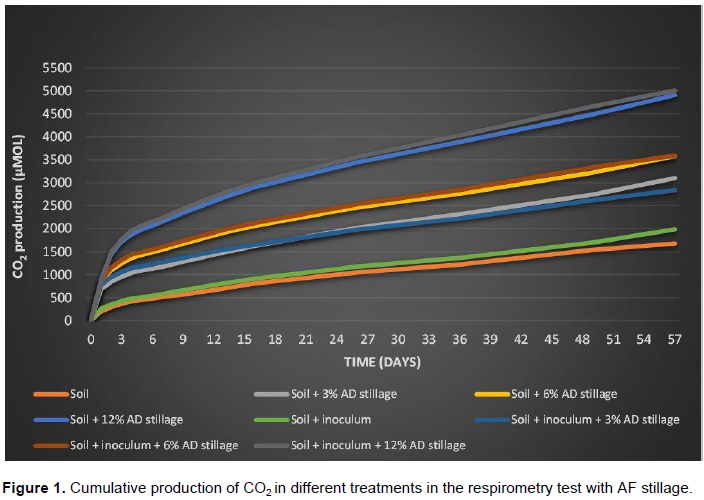 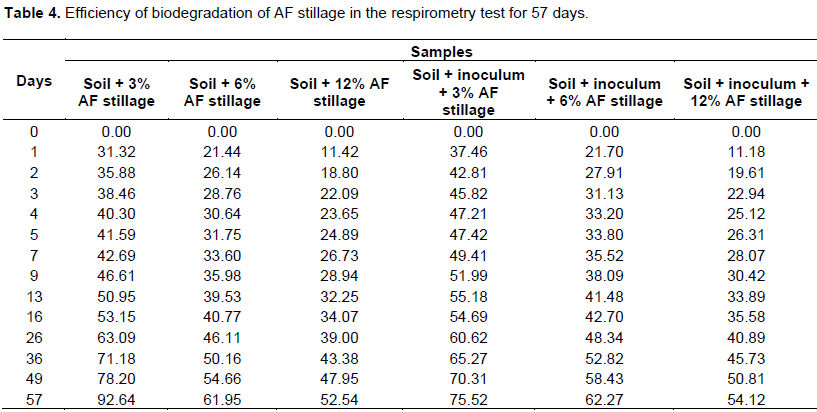 Microbiological analysis of biodegradation test
Table 5 indicates that the initial bacterial and fungal counts in the control soil were 3.4 x 105 and 4.7 x 102 CFU/g, respectively, while addition of the inoculum increased these values. In the inoculum, the load of bacteria was 1.5 x 107 CFU/ml, and the concentration of fungi was 3 x 102 CFU/ml.

The number of microorganisms was also proportionally higher with the addition of 3, 6 and 12% AF stillage, in which the number of bacteria was 1.08 x 108 and that of fungi was 1.08 x 104 CFU/ml. There were some variations in the final quantification. At the end of the test, the overall number of bacteria was lower than in the initial plating. This was probably due to the intense metabolic activity   of    microorganisms    during     the    test,    with consequent depletion of the nutrients present. On the other hand, there was an increase in the fungal count (CFU/g) at the end of the experiment. It is worth noting that fungi were present in a smaller amount at the beginning of the test. The Friedman test showed significant differences between the initial and final number of microorganisms, both for bacteria and fungi (p<0.05).
Toxicity tests
The acute toxicity test on D. similis was performed according to NBR 12713 method (ABNT, 2009). The results showed acute toxicity, with an EC50 of 9.10% and approximately 11 toxic units (TU) for the raw AF stillage studied (Table 6). This result indicates that AF stillage at a concentration of 9.10% is potentially toxic to aquatic organisms. The same test was carried  out  with  leachate from the samples in the respirometers, at the beginning and end of the test, for both experiments. 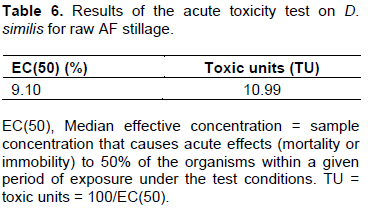 In Table 7, it is shown that leachate from the controls used in the respirometry test showed no acute toxicity to D. similis (soil and soil + inoculum), at the beginning and end of the test. In the beginning of the respirometry test, changing AF stillage addition from 3 to 6% increased the toxicity of the samples, both in the presence and absence of inoculum, which can be verified by the increase of UT values. However, samples containing AF stillage 12%  showed no toxicity, in the presence and absence of inoculum. 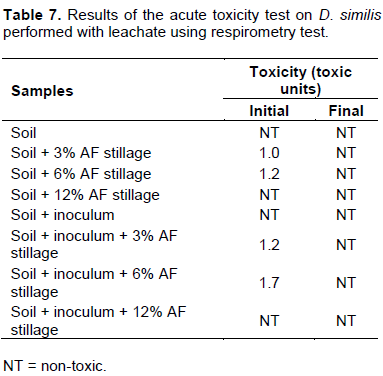 One possible explanation would be that the leachates were decanted for 7 days at room temperature, and during that time, existing microorganisms in AF stillage were able to biodegrade compounds that could be toxic to D. similis. Thus, the supernatant of these leachates showed no toxicity since the amount of microorganisms present in the soil after addition of 12% AF stillage was higher than that present in the other concentrations (Table 5).
At the end of the respirometry test, in which AF stillage underwent biodegradation, the leachate samples showed no toxicity. These results are similar to those obtained by Quiterio (2013) who found that raw ethanol stillage was extremely toxic to D. similis. However, after biodegradation in soil quantified with the respirometric technique, toxicity was removed.