Soybean (Glycine max (L.) Merrill), is an oilseed crop that is produced worldwide in varying environments (FAO, 2016). It is one of the field row crops that manifest general growth characteristic of having phenotypic plasticity, a concept which enables plants to counter environmental   stresses   (Mataa  and   Sichilima,  2019). Resource competition imposed by high plant population density results in a negative growth relationship per unit plant as recorded by Pacala and Tilmant (1994). This notion was confirmed byIbrahim (2012)and Li et al. (2019)who observed that as competition for environmental  resources  (e.g.  light,  nutrients,  moisture among others)  increased, through increased plant population density, there were decreases in individual plant biomass accumulation and this phenomenon was associated with assimilate allocation plasticity (Rondanini et al., 2017; Ibrahim, 2012).
In row crops, where intraspecific competition is at play, plants tend to utilize their biomass allocation plasticity capacities in order to ‘win’ (Yang et al., 2019). Yang et al. (2019)suggested that in severe asymmetric competition, plants allocated more of their biomass to plant parts that gave them a competitive edge in accessing resources in limitation (such as moisture and light). Hence plants may partition more assimilates to the below- ground tissues (like roots) and to support structures (e.g. stems and petioles). When competition is asymmetric, it results in weaker plants being out competed and the vigorous plants induced into positive morpho-physiological responses (Mellendorf, 2011; Rondanini et al., 2017). Park et al. (2003)described that asymmetric competition results when smaller plants get a disproportionately lower share of the available resources from the environment to their detriment because larger plants have had excessively higher share of the resource in question to the point of limiting growth and productivity of the surrounding plants (Yang et al., 2019).
As suggested by Bradshaw (1965), phenotypic plasticity induces a positive morphophysiological response that raises the plants’ resource acquisition competitiveness per unit photoassimilate produced, thereby enhancing the plants’ development capacity despite the resource limitation (Craine and Dybzinski, 2013). This concept shows that the plasticity is functional at some critical phenological stage of a plant (Mataa and Sichilima, 2019). Thus, early relief (in the developmental cycle) of the induced stress due to high plant population density (by thinning of weaker plants), theoretically builds the plants yield capacity (Mellendorf, 2011; Rondanini et al., 2017). Plasticity responses to adverse environmental cues that are restricted to vegetative phenotypic traits are referred to as vegetative plasticity (Rondanini et al., 2017). In contrast, reproductive plasticity was described by Sultan (2003)as adjustments to phenotypic traits that directly affect the reproductive success of a plant in response to various environmental stress signals.
During the process of plant development, many physiological processes that occur are controlled by plant hormones available only at specific growth stages (Maggio et al., 2018). Accurate determination of the different growth stages is critical for growth environment manipulation to influence plant development and determine potential yield loss from environmental stresses (Wright and Lenssen, 2013; Agalave, 2017). In soybeans however, the phenological stage at which plants can exhibit plasticity responses after thinning when exposed to high plant population density is not well known.
According to classical phenotype plasticity (Bradshaw, 1965; Sultan, 2003), two forms of plasticity are recognized -morphological and physiological - each with different mechanisms, resource costs and ecological implications (Bradshaw, 1965; Murren et al., 2015). The first form is meristematic in character and involves the replacement of existing tissues by new plant parts with different phenotypic characteristics: it appears to represent a high-cost solution to a change in environment (Grime and Mackey, 2002). The second- physiological plasticity- occurs in differentiated tissues and is associated with visually imperceptible changes in properties brought about by reversible sub-cellular rearrangements: here the costs are lower and the response can be much more rapidly achieved than in morphological plasticity (Mooney and Gulman, 1979; Grime and Mackey, 2002).
In an earlier study (Mataa and Sichilima, 2019), it was observed that soybean responses to stress were plastic with a range of alternative pathways or phenotypes. Additionally, stress caused plants to adopt certain phenotypes and generally no recovery or change was possible thereafter. Furthermore, these responses appeared to be dependent on the genotype and phenological stage at which stress was applied.
In this paper, we examined whether other responses were possible and/or whether plants can exhibit non-plastic or ‘elastic’ responses whereby previously stressed plants were able to recover and achieve normal yield. The main objective of the study was to determine the extent to which plant density and thinning time influence crop development and yield in soybeans, thus the study evaluated more detailed environmental responses in soybeans. Determinate and indeterminate soybean varieties were subjected to a wider range of supra- optimal planting density stress which was removed at different phenological stages and the recovery or elasticity was monitored.

Location
The experiment was conducted in the 2016 planting season at Mansa Research Station, Zambia (latitude 11° 14’ 27.0” S and longitude 28° 57’ 23.2” E) which is located in Agro-ecological Region III that is characterized by high rainfall of about 1200 mm (Chileshe and Chirwa, 1990). The site which had been fallow for two years have an elevation of 1231 m above sea level. The soils were classified as Acrisols according to the Food and Agriculture Organization (FAO, 2001) classification system. The soils were acidic with a pH of 4.4.
Plant materials
The following soybean varieties were used: Mwembeshi, an indeterminate type, self nodulating  and  an  early  maturing  variety developed by IITA; Lukanga a medium maturing, determinate and non-self nodulating variety from ZamSeed Company; SC Semeki, a determinate type from SeedCo and non-self nodulating variety with a medium maturity (SeedCo, 2015; Chigeza et al., 2019).
Experimental design and treatments
A split-split plot design with variety, planting density and thinning time assigned to the main plot, subplot and sub-subplot respectively was used in the study. The smallest unit plot measured 1.5 m by 1.5 m. The recommended plant density for Zambia of 400,000 plants ha-1 (or 400 K plants ha-1, where K denote 1000) was used as a control (Mitti, 1995). Three supra normal plant density levels (500 K; 600 K and 700 K plants ha-1) were adopted at planting and thinned down progressively to the 400 K control density level at V0, V4, R1 and R8 phenological stages (Wright and Lenssen, 2013). Hence the experimental variants were: V0 was at planting before emergence; V4 (five nodes with 4 unfolded trifoliate), R1 was the onset of the reproductive growth phase, where the plant has developed at least one open flower at any node and R8 was when the plant reached full maturity and at least 95% of the pods had attained their full maturity color (Fehr et al., 1971; Wright and Lenssen, 2013). In practice, V0 was maintained with no thinning.
Cultural practices
Standard soybean production guidelines were followed (Mitti, 1995). Briefly, prior to seeding, the land was ploughed and subjected to harrowing. Each plot was applied with a stimulative dose (33 kg ha-1) of granular D-compound (NPK 10:20:10+6S) fertilizer as recommended. In the early stages of crop development, the nitrogen-fixing systems is inoperative, hence the need to apply an external nitrogen (N) to meet the plants’ demand (Oyatokun and Oluwasemire, 2014). Planting was done on 9th January, 2016. Seeds were drilled by hand and thus the spacing ranged from 2.5 to 7 cm within rows to achieve the different planting densities. In all treatments, a 30 cm distance between rows was maintained. The seeds were inoculated with rhizobia (Rhizobium leguminosarum) at the time of seeding; hand weeding, pests and disease control were done as the need arose; supplemental irrigation was done only when the rains were inadequate and soil moisture was deemed to be below field capacity. Further, harvesting was done by hand approximately 120 days after sowing (DAS) when the crop had reached physiological maturity (8th to 10th May 2016).
Data collection
The following vegetative parameters were monitored.
Plant height: Using a hand rule, five randomly selected plants were placed in a sub-subplot; thereafter, plant height were measured from the base to the uppermost shoot tip and expressed as a mean of the five individual plants at R1 and R8 growth stages. Using destructive sampling, five plants were harvested carefully from the border roles, fresh weights were taken and thereafter the samples were air-dried under shade (for about 2 weeks) to constant mass and then reweighed to determine total dry biomass weight (at V4 and R8).
Root-shoot weight ratio: The fresh and dry mass of the below ground and above ground dry biomass from five randomly selected plants were taken at V4 phenological stage. Means of the five plants were used to compute the root  and  shoot  ratios  expressed as percentages (at V4).
The reproductive parameters that were monitored include
Number of pods per plant: This was determined by taking counts of number of pods at maturity (R8) of the five randomly selected plants.
Grains per pod: This was determined at harvest by counting the number of grains from five randomly selected plants and expressed as a mean value.
100-grain weight: This was measured by taking a triplicate sample of 100 grains per subplot of soybeans at harvest to come up with a representative mean weight.
Grain yield: This was determined from each plot by weighing the total grains harvested in the net plot (excluding guard rows) and expressed in tons per hectare.
Harvest index (HI): This was computed at harvest by dividing grain yield with the total dry biomass yield.
Statistical analysis
Data was analyzed using GenSTAT (version 18) (VSN, 2015) and graphical illustrations were generated using Microsoft Excel. Data were subjected to analysis of variance, correlation and multiple regression. Where differences were considered significant, mean separation was done using the least significant differences method.

Yield was highly influenced by variety (p ≤ 0.001). Biomass at V4 was very significantly influenced by variety (G) (p ≤ 0.01) (Table 1). Plant heights, biomass at R8, grains per pod, number of pods per plant and harvest index were significantly influenced by variety (p ≤ 0.05). Plant density (D) had no significant effect on most parameters (p > 0.05) except for biomass at R8, 100-grain weight and harvest index (p ≤ 0.05). Thinning (T) influenced significantly root to shoot weight, grains per pod and harvest index (p ≤ 0.05). Thinning stage affected yield very significantly (p ≤ 0.01) while root to shoot ratio, grains per pod and HI were significantly affected (p ≤ 0.05). There were significant interactions between treatment factors (Table 1).
Vegetative parameters
Plant height
The main factor showed that Lukanga had significantly taller plants followed by Mwembeshi and SC Semeki was the shortest (Table 2). Density and thinning did not show single factor effects. The interactive effects of variety with density and thinning were significant (p < 0.05), particularly on Lukanga at all levels of density and for thinning at V0, V2 and R1 phenological  stages  (Table 3) when measurements were taken at the end of the vegetative growth phase (R1). The interaction of Lukanga with all levels of density and thinning at the maturity stage (R8) of the plants was significant. The interaction of Variety x Density x Thinning time at the R1 growth phase was very significant, specifically for Lukanga (32.61 cm) and Mwembeshi (32.04 cm) at density 600 K plants ha-1 which were thinned at V2 and R1 respectively (Figure 1). 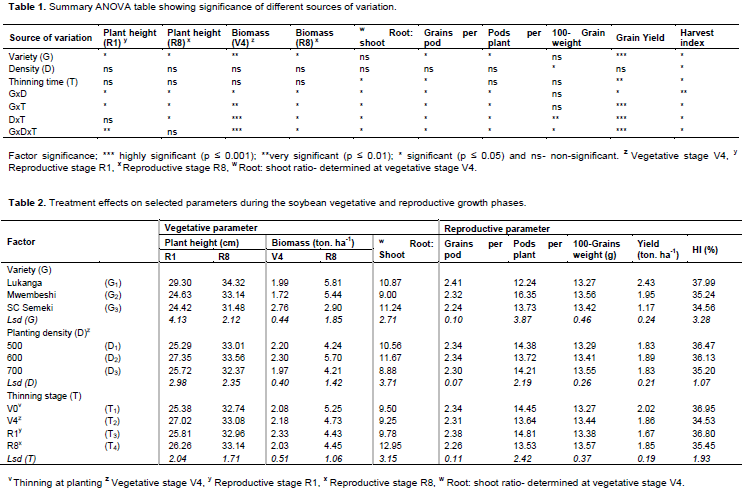 Lukanga and SC Semeki are both determinate varieties but seem to follow different pathways in their responses to density stress. The lack of effect of planting density exemplified by yield being constant at different plant density (or failure to increase yield at high planting density) suggests that maintaining a low seed rate is more economical given the high cost of seed. Our results, especially with reference to Mwembeshi, suggest that in addition to typical plastic responses, soybeans can show non-plastic or ‘elastic responses’ allowing the plant to recover after stress is removed.

The authors are grateful to the Zambia Agriculture Research    Institute    (ZARI)    Agricultural    Programme Productivity Support project for the generous financial support. This work was part of the MSc. Agronomy study of the principal author at the University of Zambia.