Nanotechnology is an important scientific field which deals with the production, manipulation and use of materials in the nano range. It deals with all the processes that take place on the nanometer scale that is from approximately 1 to 100 nm  (Duncan,  2011;  Ahmed et al., 2016). The synthesis of nanoparticles has recently gained interest due to their wide variety of applications in areas such as medicine, catalysis, electronics, photonics, computer transistors, sensing, antimicrobial activity, anti-inflamatory and so on (Jeong et  al.,  2005;  Moon  et  al., 2005; Lee and El-Sayed, 2006; Gong et al., 2007; Alexander, 2009; Chen et al., 2009; Gopinath et al., 2012; Mukherjee et al., 2002). Most of these desirable characteristics of the nanoparticles are attributed to their extremely small size and large surface volume compared to their bulk counterparts. Nanoparticles possess size and shape (cylinders, rods, spheres etc) dependent properties which are of interest for such applications (Narayanan, 2012; Roy and Das, 2015). Silver and gold nanoparticles have been particularly used with promising results as bactericides and anticancer agents (Xu et al., 2006; Devara et al., 2013).
Nanomaterials can be made of different materials and the common materials include silicates, metal oxides, non-oxide organics, ceramic polymers, metals, carbon and bio-molecules (Nagarajan, 2008). Basically there are two main groups into which nanoparticles can be classified, that is, organic and inorganic.
Various methods have been used for synthesizing silver nanoparticles and these methods include the chemical, physical and biological methods (Chandran et al., 2006; Jha et al., 2009; Raghunandan et al., 2010;  Iravani, 2011; Jacob et al., 2011; Zayed et al., 2012; Kumarasamyraja and Jeganathan, 2013; Suman et al., 2013; Rodriguez-Leon et al., 2013;  Roy et al., 2015). Most chemical methods used for synthesizing nanoparticles are too expensive and time consuming and at the same time the intense use of solvents and synthetic reactants is toxic and hazardous to the environment. This has led to the green methods of nanomaterial preparation which involve a single step and involve the use of environmentally friendly reactants. Silver nanoparticles obtained by the green synthesis methods provide good candidates to be used in biological systems. The green synthesis route requires two elements for nanoparticle growth: a silver salt and a reducing agent.
It has been revealed that some bacterial strains have developed resistance against common drugs (Singh et al., 2014). This resistance to medication by disease causing organisms has caused a stir in the medicine industry and this has led to the need to develop new bactericides and virucides. Silver and silver nanoparticles have an antiseptic and disinfectant history and are able to interact with disulphide bonds of the glycoprotein/protein contents of microorganisms (Ahmed et al., 2016). The resistance to medication by pathogens has become a stern concern in public health (Singh et al. 2014), hence the need for synthesis of silver nanoparticles. The synthesized nanoparticles should be more compatible for medical applications hence the use of edible plant extracts. Therefore, the exploitation of plant extracts has materialized as a novel method for the synthesis of silver nanoparticles (Shahverdi et al., 2007). In this work Cucumis anguria (Gherkin), a medicinal vegetable crop was selected which is abundantly found in Zimbabwe, and has a great potential for commercial reproduction for sustainable green synthesis of AgNPs. Figure 1 shows the leaves from C. anguria. 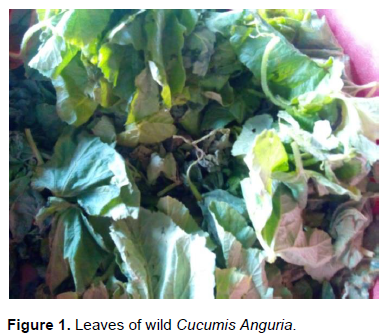 Analysis of the phytochemicals found in wild C. anguria leaves revealed that the leaves contain very useful compounds such as flavonoids, tannins, alkaloids, saponins and steroids which possess high levels of antioxidant activity (Dzomba and Mupa, 2012). Anthraquinones and saponins present in wild C. anguria exhibit antibacterial and antifungal activity against most clinical pathogens. However the leaves of wild C. anguria have not been reported for the synthesis of silver nanoparticles. In view of this background this plant is chosen as a reducing and stabilizing agent for the green synthesis of silver nanoparticles as well as their characterization and application in therapeutics. 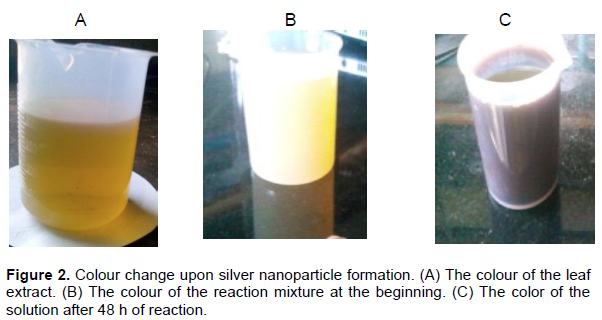 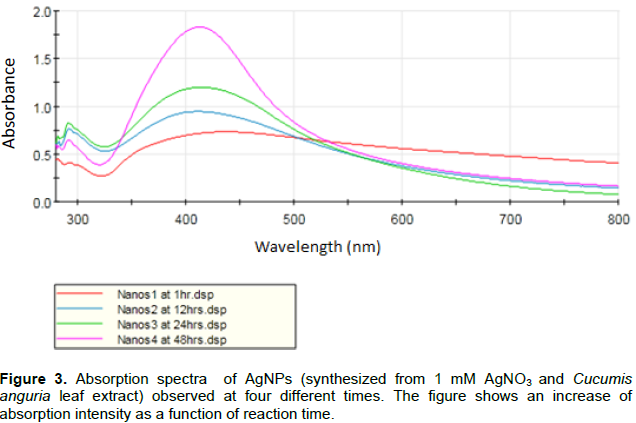 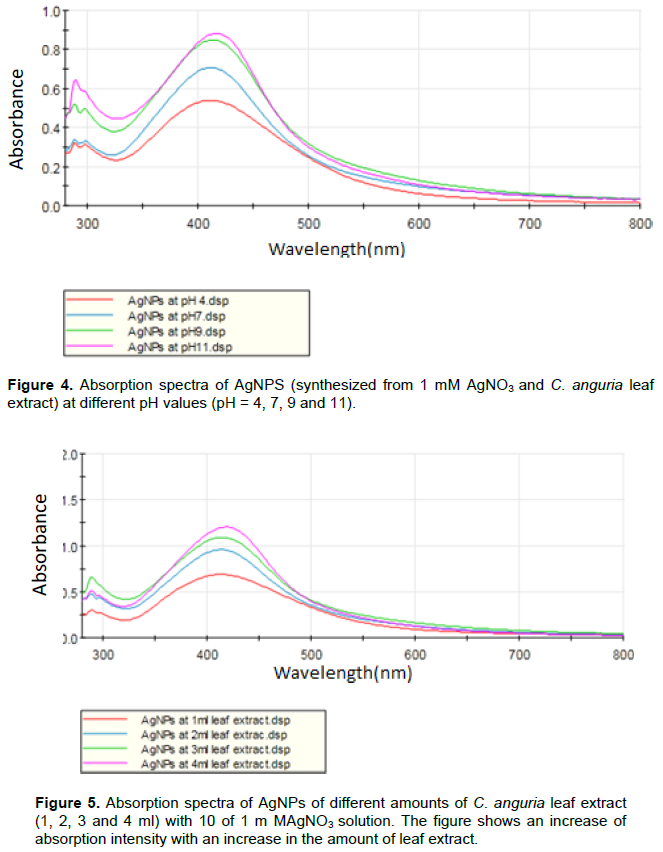 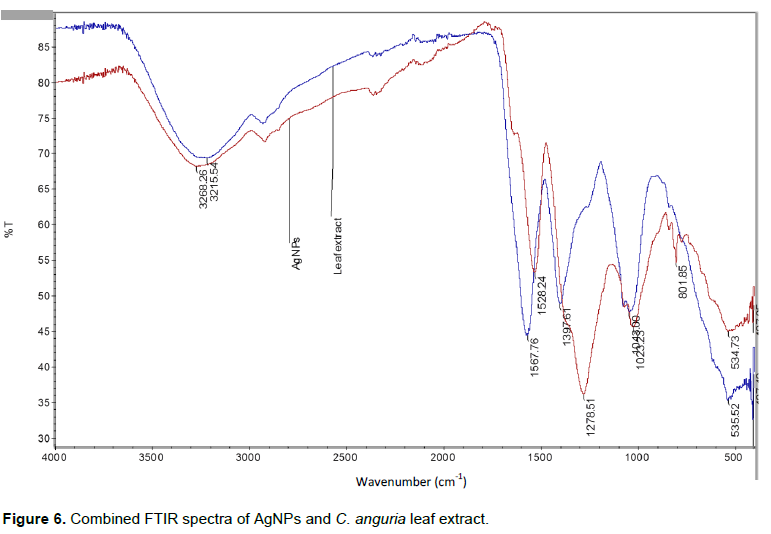 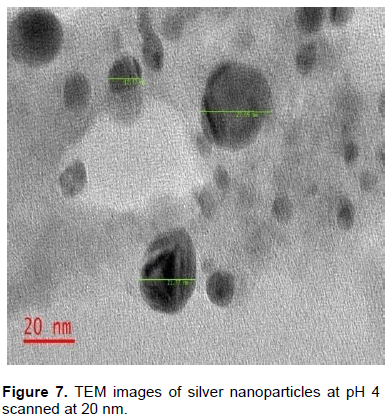 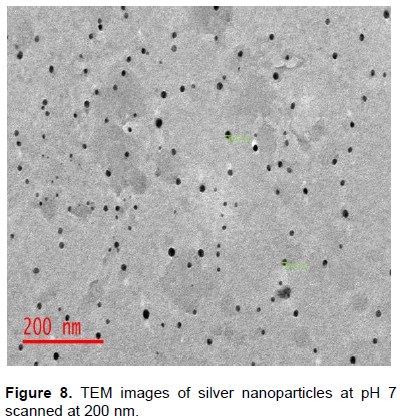 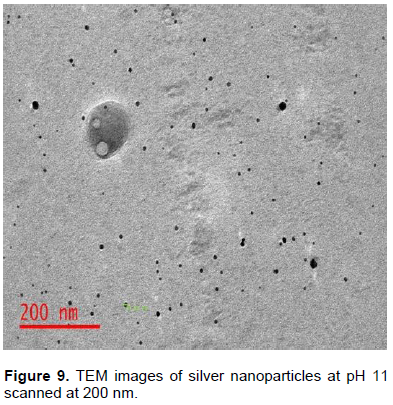 X-ray diffraction analysis
XRD results are shown on Figure 10 with the main peaks at 38.1286, 44.1242, 64.5511 and 77.4726° corresponding to the 111, 200, 220 and 311 planes, respectively. This indicatesthat the silver nanoparticles are spherical and crystalline in nature, Ibrahim (2015) with face centered cubic structure (FCC) according to data comparison with the ‘data base of joint committee on Powder Diffraction Standards (JCPDS) file No. 04-0783’. Apart from these peaks which arise due to silver nanoparticles, the recorded XRD diffractogram has additional peaks at 33.9693 and 56.8604 and 81.46. This might be due to the formation of the crystalline bio-organic compounds\metallo-proteins that are present in the C. anguria leaf extract (Anandalakshmi et al., 2016). The peak corresponding to the 111 plane is more intense than the other planes and this suggests that the 111 plane is the most predominant orientation. 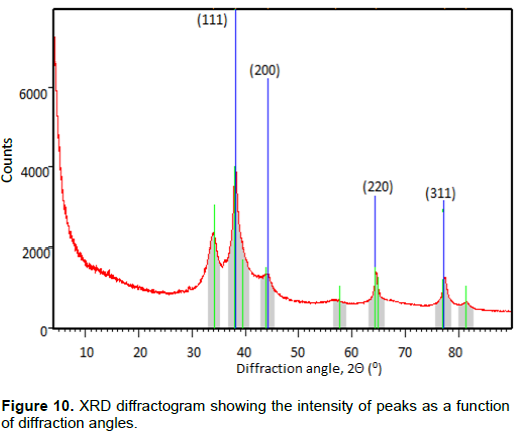 The results obtained show that silver nanoparticles have a potential antimicrobial activity against both Gram-positive and Gram-negative bacteria which are comparable with both silver nitrate and the standard drug (kanamycin).
It can be noted from the results that the diameter of the inhibition zone is higher for the Gram-negative bacteria (E. coli) than the Gram-positive bacteria (S. aureus). This slight difference can exist as a result of the differences in the composition of their cell wall. Gram-negative bacteria cell membrane comprises of a single layer of peptidoglycan whereas Gram-positive bacteria cell membrane comprises of multi-layers of peptidoglycan that makes it more rigid for penetration (Roy et al., 2015). The bacterial cell wall is believed to possess small negative charge and as a result attract the silver cations from nanoparticles when they come closer to the bacterial cell wall. When Ag+ ions experience some electrostatic attraction towards the bacterial cell wall, they move towards the cell wall and get attached to it and this leads to a change in the composition of the cell wall there by affecting its permeability (Ahmed et al., 2016). It is known that upon treatment with Ag+ ions the microorganism DNA loses its replication ability and the expression of ribosome subunit proteins as well as other cellular proteins and enzymes essential to ATP production becomes inactivated. The antibacterial effect of the synthesized silver nanoparticles can be conferred by their extremely small size and their increased surface area through which they destroy the cell membrane, enter the microbe and cause intracellular damage (Franci et al., 2015).