The increasing awareness of inherent therapeutic and prophylactic benefits of some higher fungi and their products has been the recent trend for improving a healthy vigour. Mycomeat is a mushroom derived ‘meat-like’ product produced using solid state fermentation technique. Previous research in this group revealed mycomeat as a potentially useful neutraceutical. This study seeks to explore the potential of mycomeat as a therapeutic agent against Pseudomonas aeruginosa infections. Three concentrations (83.3, 166.6 and 250 mg/kg body weight) of powdered mycomeat were prepared and administered to P. aeruginosa infected wistar rats. Morphological appearance and behavior of the rats were used as the assessment method for adverse reactions. After a period of 26 days, the rats were sacrificed with the liver, spleen and testes aseptically excised for histopathological analysis, the sperm count and sperm motility assay was carried out. Histopathological analysis revealed the testis of therapeutic group administered with 83.3 mg/kg as having a normal seminiferous tubule, while other organs were adversely affected. The group administered with 166 mg/kg of mycomeat has a normal hepatocyte, normal seminiferous tubule and splenic cells. Results from the therapeutic group were consistently better than the prophylactic group. The untreated group showed anomaly in the three organs inspected. The sperm count but not motility was significantly higher in the treated group than that observed in the positive and negative control group. This study was able to establish that mycomeat could be used to preserve body organs, at a dose of 166 mg/kg body weight. It can also be used as a birth control neutracetical for males.

Pseudomonas aeruginosa is a ubiquitous gram-negative bacterium  that   is   virulent  towards  a   wide   range   of organisms, including bacteria, plants, insects, and mammals   (Plotnikova   et  al.,  2000).  P.  aeruginosa  is  v increasingly recognized as an emerging opportunistic pathogen of clinical relevance. In humans, P. aeruginosa chronically infects the lungs of most cystic ﬁbrosis patients, causing serious infections of burn wounds and eye lesions, and systemic infections in immuno-compromised individuals (Holder, 1993). The bacterium’s pathogenicity is displayed via its secreted and surface-associated virulence factors and the complexity of the regulatory unit controlling these factors. P. aeruginosa is also known to be resistant to most antibiotics. George et al. (1989) established that the oral dose of P. aeruginosa required to establish colonization in a healthy subject is high but not impossible. The study by Mena and Gerba (2009) showed that the risk of colonization from ingesting P. aeruginosa in drinking water is low and slightly higher if the subject is taking an antibiotic resisted by P. aeruginosa. Its occurrence in drinking water is related to its ability to colonize biofilms in faucets, showerheads etc. P. aeruginosa could cause pneumonia, urinary tract infections, gastrointestinal infections and endocarditis. Although, its mode of acquisition is still much controversial, Boyer et al. (2011) reported that contaminated tap water could be associated with P. aeruginosa acquisition. The colonization of the respiratory tract could be exogenous or endogenous such as from the intestine, the oropharynx and the gastric compartment (Forestier et al., 2008).

The liquid mycelia extract of Lentinus squarrosulus is known to have ulcer prevention and healing capabilities in rats, this establishes that this mushroom species is not only edible and nutritious but also possess tonic and medicinal qualities (Omar et al., 2011). Traditionally, mushrooms are used for nutritional, medicinal and mythological benefits in Nigeria (Osemwegie et al., 2006). Globally, the level of mushroom nutraceuticals established mushrooms as good health food and reports abound on their use for the treatment of malnutrition in infants, diabetes, obesity or hyperlipidemea, sterility, anemia, mumps, fever and protein deficiency (Idu et al., 2007). The presence of polysaccharides in mushrooms could make them useful as natural health promoters against parasites, bacteria and viruses (Oei, 2003). Both fruiting body and the mycelium of mushrooms contain compounds with wide ranging antimicrobial activities. They are rich sources of natural antibiotics, where the cell wall glucans are well known for their immunomodulatory properties, and many of the externalized secondary metabolites combat bacteria, fungi, and viruses (Collins and Ng, 1997). Our previous study on mycomeat production using Lentinus squarrosulus revealed it is nutritious and could be harnessed as a useful neutraceutical. However, reports on mycomeat generally are very few and to the best of our knowledge, no report on its therapeutic efficacy has been reported till date. This research therefore seeks to establish the in-vivo efficacy of mycomeat against P. aeruginosa infection in animal model.

All the applicable guidelines for the care and use of animals were followed in the study. Seven days prophylactic and 1 h post infection effects of mycomeat on P. aeruginosa were investigated using the method previously described by Oke (2006).

Eighteen, 16-weeks old albino rats were fed on pellets and sterile water ad libitum. They were divided into three groups, Set A1, A2   and A3 administered with 83.3 mg/kg bodyweight of mycomeat, 166.6 mg/kg bodyweight and 250 mg/kg bodyweight, respectively. Seven days post mycomeat administration, an aliquot of (4.0×107 ml) bacterial suspension was galvaged into each animal. The rats were observed for 26 days, after which they were sacrificed by cervical dislocation. The liver, spleen and testes were excised for histopathological analysis, sperm motility and sperm count was also analysed.

Aliquot of (4.0×107/ ml) bacterial suspension was administered orally into each of twenty-four animals. After 1 h, they were divided into four groups of 6 each, Set B1, B2 and B3 were treated as above. The control group was administered with 0.2 ml of (4.0×107/ ml) bacterial suspension alone without treatment (Cp). Other control groups were administered with mycomeat suspension alone (Cm) and the last group was given feed and water only (C01). The rats were followed for 26 days, after which they were sacrificed by cervical dislocation. Post- infection assay was done by using the method of Majolagbe et al. (2013) to establish the colonization of the test organism.

The liver, spleen and testes were excised for histopathological analysis, sperm motility and sperm count were also carried out. The organs were preserved in 10% formalin for histological studies so as to detect pathological changes.

The result for sperm count and sperm motility were expressed as the mean ±SD. Means were analysed using a one-way analysis of variance, followed by the Duncan Multiple Range Test to determine significant differences in all the parameters. Differences with values of P˂0.05 were considered statistically significant.

The rats treated therapeutically with mycomeat appeared very agile, stronger, well-fed and much better than both the prophylactic and untreated but infected control rats. The untreated group appeared haggard, skinny and aggressive. This coupled with the re-isolation of the test organism confirmed that P. aeruginosa was able to colonize and initiate infection.

Sperm analysis for the therapeutic treatment group along with controls is as shown in Table 1 while Table 2  shows the sperm analysis for the prophylactic group along with controls. The sperm count in the Cm group was significantly higher (53.9×106) than that of the control group (C01), but significantly have the same effect with the group therapeutically treated with 83.3 and 250.0 mg/kg.bd.wt (Table 1). However, the sperm motility was lower than the group given feed and water only; this could possibly result from the pH of the mycomeat. 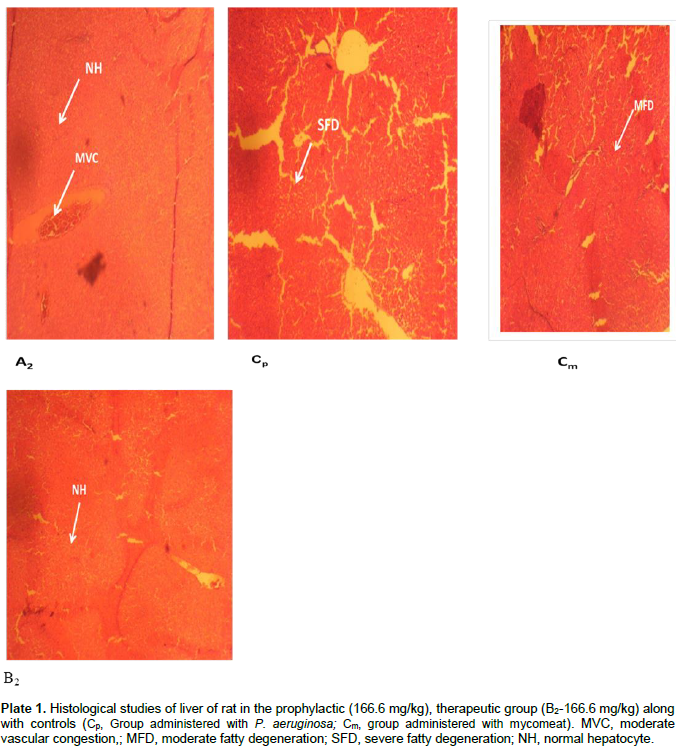 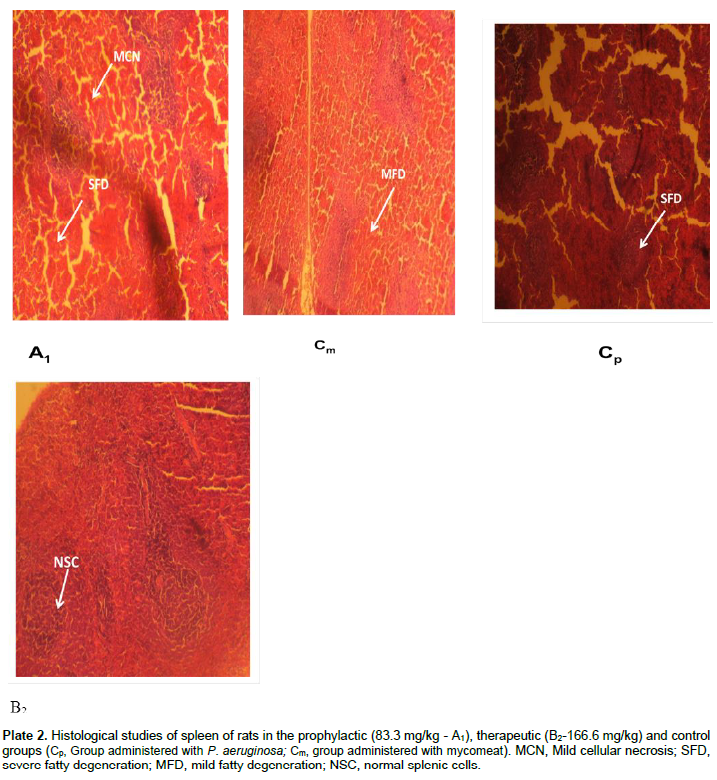 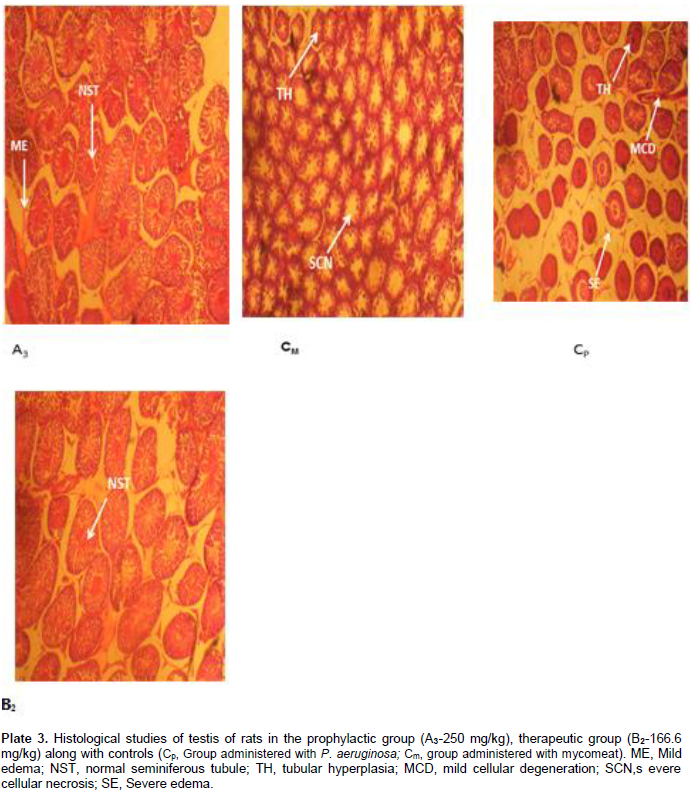 The study reveals the potential of mycomeat as a neutraceutical. Mushroom has long been recognized as having several medicinal benefits, however mushroom growing requires great expertise, techniques and investments. The use of mushroom mycelia offers an added advantage over the use of mushroom itself; this include lesser space, shorter production time, less risk of contamination and almost the same medicinal value conferred by the corresponding fruit body. In this study, the medicinal effect of mycomeat against P. aeruginosa was established. The histopathological study of the experimental liver revealed normal hepatic cells in both the prophylactic and therapeutic group, as compared to the control group. The mechanisms of the hepato-protective effects are still not clearly defined.  However, it is probable that antioxidants, phenolics and radical scavenging activities could be responsible as L. squarrosulus is a versatile organism known to secrete a great  amount  of   extracellular   polysaccharide   into  its growth substrate (unpublished data). It has been suggested that antioxidant and radical scavenging activity, modulation of nitric oxide production, maintenance of hepatocellular calcium homeostasis, and immuno-modulatory effects might be involved in hepatoprotection (Wasser, 2005). The therapeutic group galvaged with 166.6 mg/kg.bd.wt were also noted to have normal splenic cells while the prophylactic group showed a severe fatty degeneration, the reason for this is not clear.

Interestingly, the sperm count of the group therapeutically treated showed values that were not dose dependent but significantly higher than the untreated group and the group given feed and water only. However, the sperm motility assay showed a dose-dependent relationship, the higher the dose, the lower the motility of the sperm cells; with all the doses showing a significantly different motility from those of group C01. It is probable that the acidic pH of mycomeat contributed to the reduction in the sperm motility; however, mycomeat clearly supported increased mitotic activity of the sperm cells. This fact is supported by the histopathology study of the testis of group Cm showing an increased number of necrotic sperm cells. An amendment of the pH before administration might lead to fertility improvement, since impairment of spermatogenesis as well as changes like decrease in pH, hypotonic environment, and chemical substances like mucoproteins, alkaline phosphatase and acid phosphatase in spermatogenic cells might lead to the formation of non-viable spermatozoa (Kashinathan et al., 1972).

Valproic acid and carbamazepine has been found to have a similar result on sperm motility. Cohn et al. (1982) used   valproic  acid  and  carbamazepine,  leading   to  a reduced sperm content and motility in the experimental rats. On the contrary, Aboua et al. (2012), reported that the intake of red palm oil diet can help protect the male sperm function, leading to improved fertility. A previous research by Chang et al. (2008) found that the supplementation of diet with Cordyceps militaris lead to an increased sperm quality and quantity. The report of Khaki et al. (2009) on the spermatogenesis and sperm parameters of rats showed an increase in sperm percentage, motility and viability when ginger was used.

Mycomeat will be applicable in animal husbandry, where meat  production  is preferred to fertility.   However, since there is limited birth control strategy for males, further research on mycomeat can find it useful in countries experiencing overpopulation as a means of birth control. Nevertheless, the effect of mycomeat on the female reproductive system was not covered in this research and could be a future research to be looked into. This study has revealed that P. aeruginosa infections could possibly affect some organs, including liver, spleen and testis and could play a part in infertility. The mechanism of action employed by P. aeruginosa is still unclear; however P. aeruginosa is known to produce hydrogen cyanide (HCN) maximally  in   the  late  exponential  and  early  stationary phase under microaerophilic conditions (Blumer and Haas, 2000).

This study was able to establish that mycomeat could be useful in preserving body organs, at a dose of 166 mg/kg body weight. It can also be used as a birth control neutracetical for males and in animal husbandry for increasing productivity as induced by castration.

We declare that there is no conflict of interest whatsoever as regards this research work.

The author appreciates the input of Mr Ayodele S. and Mr Gabriel O. who painstakingly contributed to the success of the  research  work.  Likewise,  Mr Owolabi Gbenga for the useful input in result interpretation.