Large number of second-stage juveniles of root-knot nematode, Meloidogyne incognita was prepared for scanning electron microscopy over a millipore filter (pore size 0.45 µm). The J2 juveniles were quickly immobilized and killed before fixation using the cryo-fixation technique followed by the primary fixation in 2.5% glutaraldehyde pre-cooled at 4-8°C and then secondary vapor fixation in 1% osmium tetraoxide and drying with the series of ethanol without subsequent critical point drying. The specimens were vacuum dried in a desiccator for a period of 24-48 h. Cryo-fixation emphasizes the need to quickly stop cellular activity and thus prevent any surface artifacts that occur due to conventional fixation techniques.

Meloidogyne incognita is a widely distributed plant-parasitic nematode considered as one of the most damaging crop pests affecting crop production (Trudgill and Blok, 2001). The second-stage juveniles of M. incognita (J2) after hatching from egg masses crawl in their soil environment to invade the root system of the host plant in which they undergo three moults and develop into adult females. Because of their significance in carrying out the life cycle of M. incognita, J2 are considered to be the key in managing the nematode population and therefore have been the subject of extensive studies (Mukhtar et al., 2013; Vanholme et al., 2004; GravatoNobre and Evans, 1998).

The scanning electron microscope (SEM) provides a means to define the surface topographical features of species. Morphological and taxonomic studies of nematodes have been greatly enhanced by the use of SEM, and species descriptions increasingly include scanning electron micrographs. Unfortunately, morphological details are often obscured as a result of poor preservation and by artifacts produced by preparative techniques. Specimen preparation remains a limiting factor in the quality of information provided by SEM. The distortions occurring in the initial stages of preparation become magnified in the subsequent steps. Earlier conventional and SEM investiga-tions of plant-parasitic nematodes compared several different methods of specimen  preparation  (Green et al., 1975; Wergin, 1981, Wergin and Stone 1981; Wergin, 1982; Eisenback 1986; Carta et al., 2003, Viaene et al., 2007; Kumar et al., 2012). Cryofixing the live organisms has the advantage of processing them to a more life-like state as it takes a few milliseconds and the specimens remain fully hydrated. It also emphasizes the need to quickly stop cellular activity and thus prevent destruction of tissues through autolytic activities. 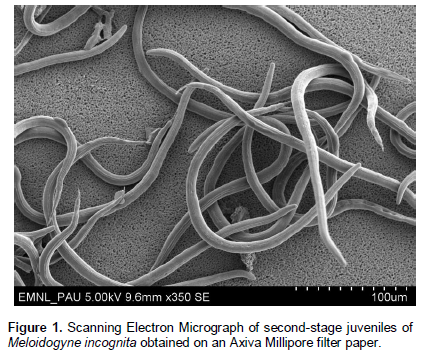 The major constraint in the studies on J2 include: (1) their small size (300-500 µm) which impedes their handling and processing. In previous electron microscopic studies J2 were generally picked up manually and processed which limits their number for studies; (2) the impervious nature of the cuticle as a result of which proper fixation is affected; (3) response of the nematode to the fixing fluid resulting in the coiling and distortion of the surface features. In order to overcome these diffi-culties we developed a cryo-fixation technique involving quick immobilization and killing before fixing with the conventional glutaraldehyde-osmium tetraoxide fixing solution. The same is described in the present paper.

M. incognita cultured on tomato (Solanum lycopersicon cv. Castlerock) was maintained in the laboratory environment at 22-28°C. Freshly hand-picked egg masses from the roots of tomato plants were hatched in distilled water to collect J2 at room temperature (23±2°C). After 24 h, the hatched juveniles were collected in a test tube, washed with triple distilled water (TDW) and re-suspended in 0.5 ml of TDW. This suspension was filtered through 0.45 µm millipore syringe filter assembly. The filter containing nematodes was placed in a cryo chamber containing liquid nitrogen for 5 min to immobilize live J2. Once cryo-fixed, the filter paper was immediately placed in 2.5% glutaraldehyde buffered with 0.2 M sodium cacodylate adjusted to a pH of 7.2 in a cavity block for 48 h at 4°C. This was followed by washing the fixed specimens with 0.1 M sodium cacodylate washing buffer thrice for 5 min each. Secondary vapor fixation was carried out in a dessicator using 2% osmium tetraoxide (OsO4) (buffered in 0.1 M sodium cacodylate, pH 7.2) for 12 h at 4°C followed by a second washing with 0.1 M washing buffer thrice to remove any unreacted OsO4 at 4°C. The specimen was dehydrated in a six-step ethanol series for a period of 3 h and later vacuum dried at 650 Pa at room tem-perature for 24 h. In the present study, the nematodes were not critical point dried because most of the J2 due to their small size were lost during drying in CPD even after using BEEM capsule cartridge (Eisenback, 1985) with Millipore filters. Large number of dried J2 on a millipore filter paper were mounted on aluminum stubs using double sided carbon tape sputter coated with gold to prevent the build-up of high voltage changes on the specimen surface in an ion sputter coater (Hitachi E-1010) at a current of 18 - 20 mA for 20 s. The specimen was viewed and imaged with a Scanning Electron Microscope (Hitachi S-3400N) using SE imaging mode at 3-15 kV acceleration voltage.

Processing technique was evaluated on the basis of the final image obtained with the SEM. The quality of presser-vation of the J2 surface using the cryo-fixation technique and obtaining them in large number using the millipore filter paper technique were the most important observations seen with the SEM image.

In earlier studies poor preservation of the tissue usually resulted in wrinkles caused by shrinkage of the specimen. Most of the techniques are associated with surface precipitates, wrinkled nematode surface, and collecting large number of J2 for observation under SEM which obscure morphological details. Filtering the clean suspen-sion with large number of J2 through Millipore filters (Figure 1) helped in obtaining them in large number for viewing under SEM and better comparison between the specimens  of  the  same   species   as  compared  to the conventional method of picking single J2 with bamboo pick. The cryo-immobilzation and killing of J2 before the conventional fixation procedure helped in obtaining J2 free of any preparation artifacts and shrinkage of the nematode surface (Figure 2) due to their direct immersion in glutaraldehyde fixative at 4°C. Eisenback (1985) compared various methods of preparing nematodes for scanning electron microscopy. The initial comparison of preparative techniques used formaldehyde-based fixa-tives (Green et al., 1975) which have been replaced by glutaraldehyde (Eisenback, 1985). The immobilization, fixation and drying methods are extremely important in preparing nematodes for SEM. During the present study much better results were obtained by first cryo-immobilizing the J2 followed by glutaraldehyde fixation and without critical point drying of the J2. 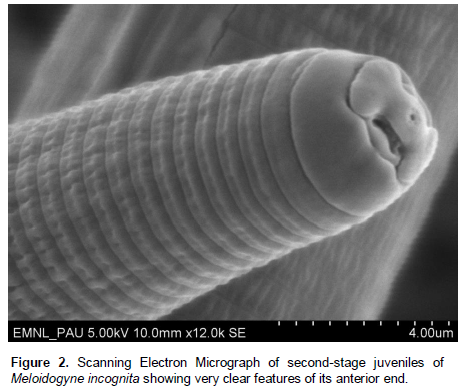