of east Africa (Orwa et al., 2009). The tree is recognized as one of the most valuable species for agroforestry purposes in the area because of features such as its drought tolerance, fast growth, high wood quality and ant resistance (Kariuki et al., 1990; Mulanda et al., 2015). Plus trees have been selected in Kenya, and improvement for drought tolerance and growth rate are being attempted through a breeding program (Muchiri and Mulatya, 2004; Luvanda et al., 2015). Superior varieties will be developed in the near futures, and the availability of clonal propagation protocol has important implications in the distribution of these varieties. This is because cloned trees maintain the genetic makeup of their mother trees, and the use of clones with homogeneous and desirable traits will improve productivity in forestry and agroforestry (Park et al., 1998; McKey et al., 2009). It is known that succession rate of stem cutting is not necessarily high (up to 33%) in M. volkensii although the reason is unclear (Indieka and Odee, 2004). Grafting is generally used as the clonal propagation method in M. volkensii. However, the method requires an investment in time and effort to prepare the plant materials, and a practiced technique and dedicated tools are also required. Therefore, other easy and cost-effective method for clonal propagation is needed for M. volkensii.

Root cutting is one of the general clonal propagation method, and it’s use have been reported in various species such as Populus tremuloides (Schier, 1974; Snedden et al., 2010), Populus tremula×Populus tremuloides (Stenvall et al., 2004), Paulownia tomentosa, Paulownia fortunei (Ede et al., 1997), Prunus avium (Ghani and Cahalan, 1991) and Detarium microcarpum (Ky-Dembele et al., 2010). These studies have identified the effects of some factors on the succession of root cutting. For example, Ede et al. (1997) reported the importance of root size (whether > 5 mm of diameter of root cut edge or not) and the position where the root was obtained. Ky-Dembele et al. (2010) also reported significant effect of root size (> 10 cm of length and 15 mm of diameter) and no effect of root alignment on succession of root cutting. These studies indicate that optimum condition for root cutting should be considered in accordance with root configuration or other attributes of the target species.

A high ability to produce root suckers in M. volkensii is associated with mechanical damage to the root (Stewart and Blomley, 1994), and viability of root cutting was also reported by Mulatya et al. (2002). In addition, M. volkensii develop thick, deep roots (Mulatya et al., 2002) and therefore, clonal propagation using the abundant root resources is feasible. However, essential conditions for successful root cutting have not been systematically tested in M. volkensii, but very important knowledge for efficient clonal propagation. The present study evaluated: 1) the relationship between root size and formation of adventitious buds, 2) the anatomical differences between roots on which adventitious buds formed or did not form, to understand the anatomical factor needed for successful root cutting, and 3) the usefulness of cross-sectioned roots without root tips for enhancing the clonal propagation efficiency of M. volkensii.

The relationship between root size (diameter of cut edge and fresh weight) on the efficiency of adventitious bud production was examined. Plant materials were potted one-year-old juvenile trees of M. volkensii, derived from open-pollinated seeds collected in Kenya. The plants were grown in pots in temperature-controlled greenhouse with natural light in Hitachi, Japan (36.69N, 140.69E). One to four root tips of about 8 to 16 cm length were cut from each of the 48 juvenile trees with tree height of about 40 cm (Figure 1a). The diameter of the cut edge (average of two sides) and fresh weight were measured by caliper and electronic balance, respectively. Root length was not measured in this study because it was difficult to measure curved root fragments (Figure 1a). In total, 94 roots were randomly selected, and these roots were planted in polypots (diameter and height are 10 and 21 cm, respectively) with mixed soil (Yabashi et al., 1992; Kanuma soil: leaf mold = 1:2 volume ratio). Note that, about 0 to 5 mm of proximal end was exposed above ground (Figure 1b). They were kept in the above mentioned greenhouse, watered every two to three days until the 60th day after planting, and then the presence of adventitious buds was observed. Temperature and humidity in greenhouse during the experiment period were 24.9±3.5°C (mean±SD) and 75.2±17%, respectively. The difference in root size for roots with and without adventitious buds was tested by unpaired t-test using the t test function in R software (R Development Core Team 2015). 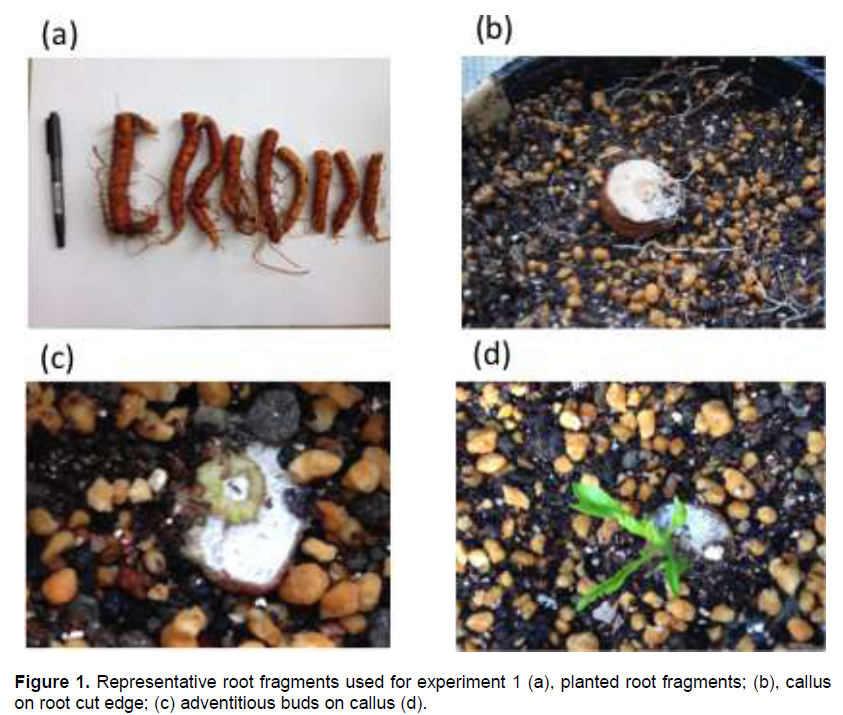 Experiment 2: Attempt at promotion of propagation

The suitability of cross-sectioned roots for improving the efficiency of propagation was tested. Roots were cut from four M. volkensii trees with diameter at breast height of about 3 cm that had been grown in the greenhouse (potted 3-year-old trees with height controlled at about 2 m). The roots were subjected to two kinds of treatments, that is, cross-section of roots without root tips (hereafter called C-S roots) and roots with root tips (hereafter called RT roots) were used for the experiments. The length of both kinds of roots was about 5 to 10 cm. In total, 22 C-S and 17 RT roots were used for the experiment. Environmental condition and subsequent procedures until observation of adventitious buds were the same as experiment 1. When C-S roots were planted, distal end was always buried in soil. If proximal end was buried in soil, adventitious bud would be formed in the soil as was found in the preliminary studies (Figure 2).

Testing for the difference in the proportion of roots forming adventitious bud in C-S and RT roots was carried out by prop.test function in R software (R Development Core Team, 2015).

To reveal difference between adventitious buds formed and not formed roots, anatomical observation was carried out by frozen section technique (Kawamoto, 2003). Three samples were selected from roots both freshly forming and not forming adventitious buds. The roots were placed in a stainless steel container filled with SCEM-L1 embedding gel (Section-lab Co. Ltd., Japan) and frozen in cooled n-hexane by liquid nitrogen. The frozen blocks were removed from the container, and sectioned at a thickness of 10 µm using a CM3050S cryomicrotome (Leica Microsystems, Germany). The sections were stained with 0.5% toluidine blue or iodine-potassium iodide solution. The stained sections were observed under a DMRXE light microscope (Leica Microsystems, Germany) and photographed by a digital camera. The diameters of cut edges and secondary xylems were measured by a digital caliper. Regarding projected area of starch in secondary xylem or secondary phloem and cortex, two to five photos (size: 2048 × 1536 μm) of the sections stained with iodine-potassium iodide solution were randomly taken in each sample, and the photos converted to binary images to cover areas of starch grains using the software ImageJ 1.48v. The rates of starch (black) area were also calculated by the measure command of ImageJ software.

Effect of root size on efficiency of adventitious bud formation 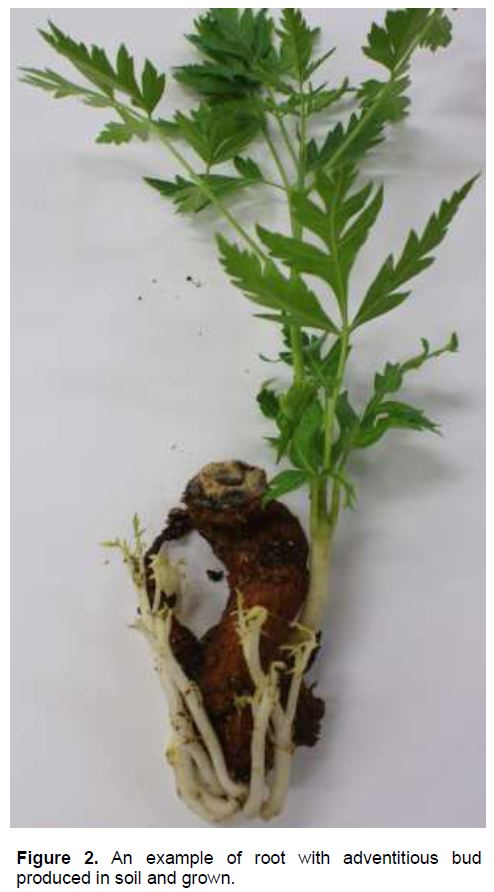 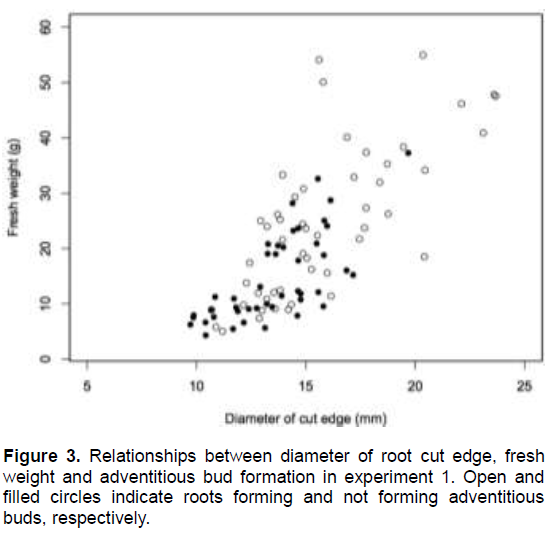 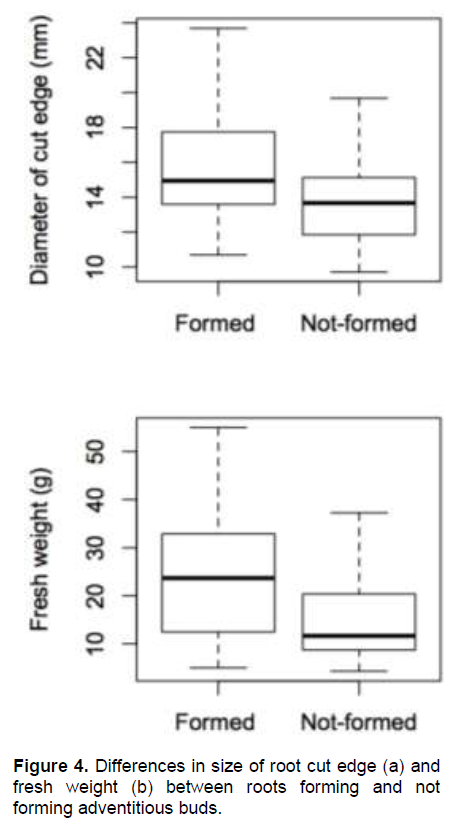 Effect of sectioning of root cutting on adventitious bud formation 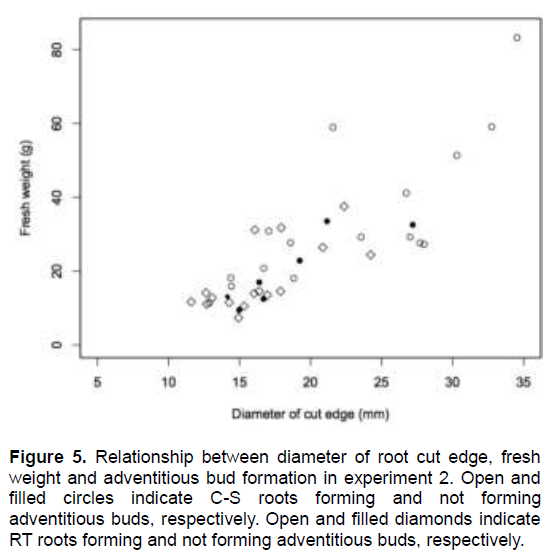 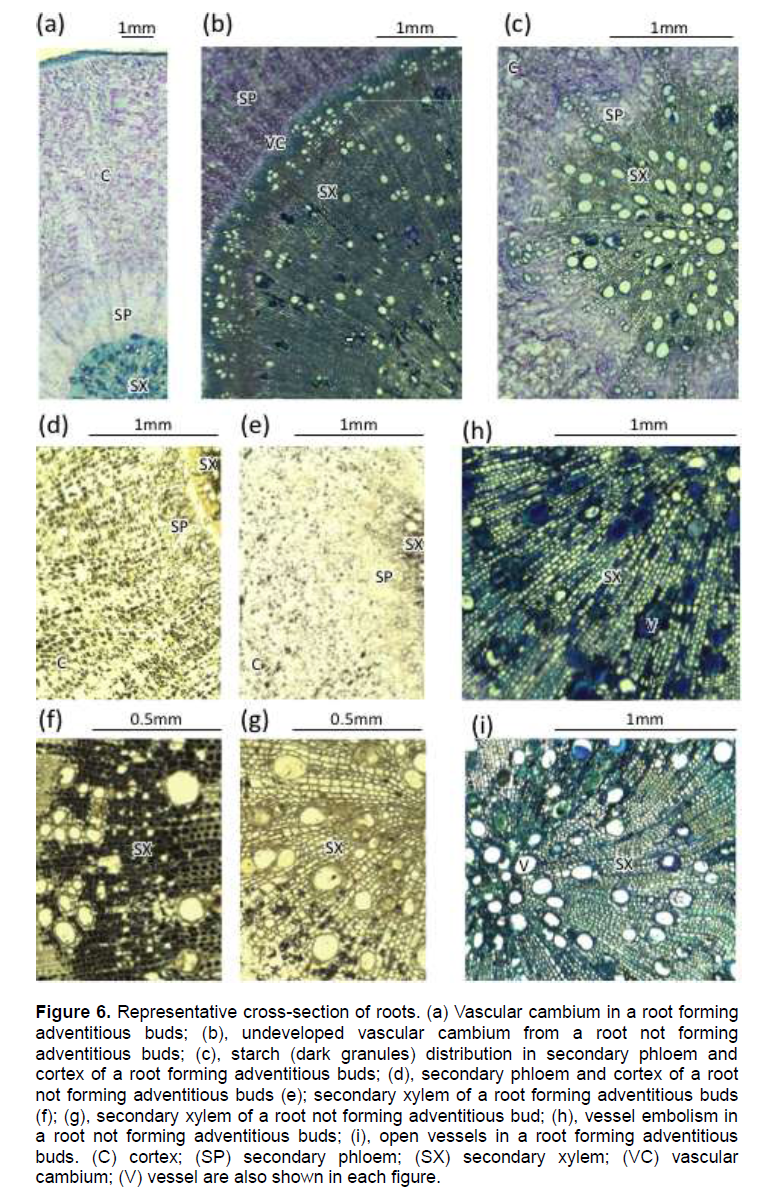 Effect of root size on efficiency of adventitious bud formation

In experiment 1, the frequency of formation of adventitious buds was higher in larger roots; both the diameter of the cut edge and fresh weight of roots forming adventitious buds were significantly higher than in those that did not form them (Figure 4). Therefore, root size (volume) is thought to be important for the success of root cutting in M. volkensii. For practical purposes, a cut edge larger than 15 mm and fresh weight greater than 20 g will be criteria to follow because the frequency of formation of adventitious buds was 77.0% under these conditions. On the other hand, it decreased to 37.2% in roots that did not meet these criteria.

The effect of root size on the formation frequency of adventitious buds has been reported in some species [for example, Actinidia chinensis (Lawes and Sim 1980), Prunus avium (Ghani and Cahalan, 1991), Detarium microcarpum (Ky-Dembele et al., 2010)], and the importance of nutritive conditions correspond to root size in some of them. In M. volkensii, starch content tended to be high in roots forming adventitious buds (Figure 6d-g and Table 1). However, it varied in roots that did not form adventitious buds. In populus, it is reported that carbohydrate is not necessarily a determining factor for successful root cutting, and the importance of hormones or unknown substances in roots was reported (Snedden et al., 2010). A similar phenomenon is thought to be applicable to M. volkensii, and starch accumulation may be a factor, though not a major one, for successful root cutting.

adventitious buds (5.7 mm, n=3). Therefore, roots that did not form adventitious buds are thought to be transition stage from primary growth to secondary growth, which might affect the efficiency of adventitious bud formation. This study findings on more bud induction in larger roots indicated that root size might reflect the effect of the developmental stage of the root. In addition, it was observed that the vessels in one of the roots that did not form adventitious buds appeared to be filled by tylose or a similar substance, an indication of infection, water stress and/or senescence (Phillips et al., 1987; Neuhaus et al., 2007). However, only a limited number of samples could be observed in this study, and therefore, the relationship between root size, developmental stage and the resulting efficiency of formation of adventitious buds should be observed concurrently using more abundant samples in future studies.

The effect of some factors other than root size has also been reported in other species. For example, the effect of clonal variation (Stenvall et al., 2004) or temporal variation on efficiency of root cutting has also been reported (Snedden et al., 2010). In this study, many unknown tree families were used in experiment 1, and therefore, clonal variation could not be considered as part of the experiment. On the other hand, the efficiency of adventitious bud formation was confirmed in each family in experiment 2, and all families showed a high rate of formation of adventitious buds (80.0, 66.7, 80.0 and100% for the four mothers). Therefore, clonal variation was not observed, but a high tendency for root suckering in M. volkensii was confirmed. There may also be phonological effects: M. volkensii grows in east Africa, and clear rainy and dry seasons alternate in the region. Therefore, hormones and metabolic resources in roots will be different in different seasons of root collection. Unfortunately, source trees were grown in a greenhouse with controlled temperatures and watering conditions, and therefore, other conditions could not be tested in this study.

In experiment 2, most roots used in this second experiment satisfied the criteria for success root cuttings, that is, >15 mm cut edge and >20 g fresh weight (Figure 5), and formation frequency of adventitious bud were 74.4% in C-S root and 94.1% in RT root. Although the frequency was slightly lower in C-S roots, the values were not significantly different (p > 0.05). Therefore, efficient propagation will be achieved by using both C-S and RT roots.

From this study, the importance of root size for successful root cuttings in M. volkensii is concluded. Anatomical analysis indicated that root size roughly reflects the developing stage of root, and larger root (> 15 mm of diameter and > 20 g of fresh weight) are recommended for root cutting. Both parameters will be effective in inferring the developing stage of roots because significant correlation between root cut edges and fresh weight was observed (experiment 1, r2 =0.58, p < 0.01). However, diameter of cut edge could be more convenient visual parameter, and therefore, root cut edge will be more convenient parameter for practical utility.