Pinus merkusii is an important species in Vietnam with many economic and biological contributions. The information on diversity within and between populations of a species is necessary for plantation programs, breeding and conservation strategies. Genetic diversity of three Vietnamese populations (NA, QB and QN) was analyzed using the random amplified polymorphic DNA (RAPD) markers. Nine RAPD primers produced 82 markers, 77 of which were polymorphic with 93.9% of polymorphism. The results showed higher genetic variation within populations (72%) than between populations (28%) and low Nei’s genetic differentiation index among populations (0.1867). The populations also clustered based on PCoA analysis where cluster I included NA and QB populations and Cluster II, the QN population. These results suggest that P. merkusii populations in Vietnam is necessary to develop the genetic resources.

Pinus merkusii is a tropical forest tree grown and planted naturally across the south Equator. This species is distributed naturally and artificially in Southeast Asia including Vietnam, Laos, Cambodia, Thailand, Malaysia, China and the Philippines (Cooling, 1968; Farjon, 2005; Razal et al., 2005; Theilade et al., 2000). It can grow from 30 to 2000 m above the sea level (Cooling, 1968; Santisuk, 1997). This species is used for the production of heavy wood, fuel, pulp, timber, resin and turpentine. Resin which is used as material for medicine, paints, printing and prefume industry is one of its most important products (Hidayat and Hansen, 2002; Razal et al., 2005; Theilade et al., 2000). P. merkusii is one of the principal tree in reforestation, soil erosion control and rehabilitation in Vietnam and Indonesian Islands (Hidayat and Hansen, 2002; Razal et al., 2005). This species has been extremely exploited which reduced areas of its habitats, habitat quality which led to dramatic decrease in natural areas in the past decades (Bharali et al., 2012; Kumar et al., 2000). As a result, it is listed in the International Union for Conservation of Nature as the world’s threatened forest tree species (UICN, 2011).

Young clean leaves were collected from 79 P. merkusii lines from three populations at three provinces of Vietnam (Table 1 and Figure 1). All samples were stored in -80°C after collecting. 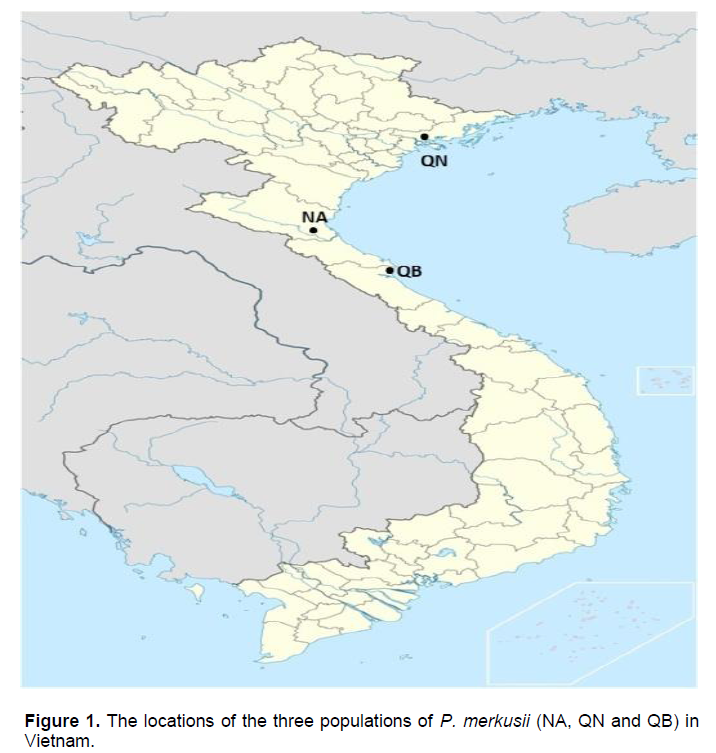 Total DNA was isolated from young leaves following Doyle and Doyle (1990) method. DNAs quality and quantity were accessed using NanoDrop Lite (Thermo scientific, USA), the DNA concentration was adjusted to 50 ng/µL for use in RAPD-PCRs.

Nine RAPD primers were able to amplify DNA fragments of 79 individuals of P. merkusii (Table 2). A total of 82 bands were obtained including 77 polymorphic bands with mean of 93.90%. The results also showed that the average number of markers were 9.1 for primer and the average number of polymorphic markers were 8.55 primer. The fragment sizes fluctuated between 200 and 1500 bp and the number of bands ranged from 4 (RA143) to 14 (OPE14). The PIC values of primers were high and ranged from 0.724 to 0.88 with an average of 0.82. Figure 2 showed the result of amplication for the portion of NA and QB populations with OPF09 and RA46 primers. These results indicated that all nine RAPD primers are significant for assessing P. merkusii populations. 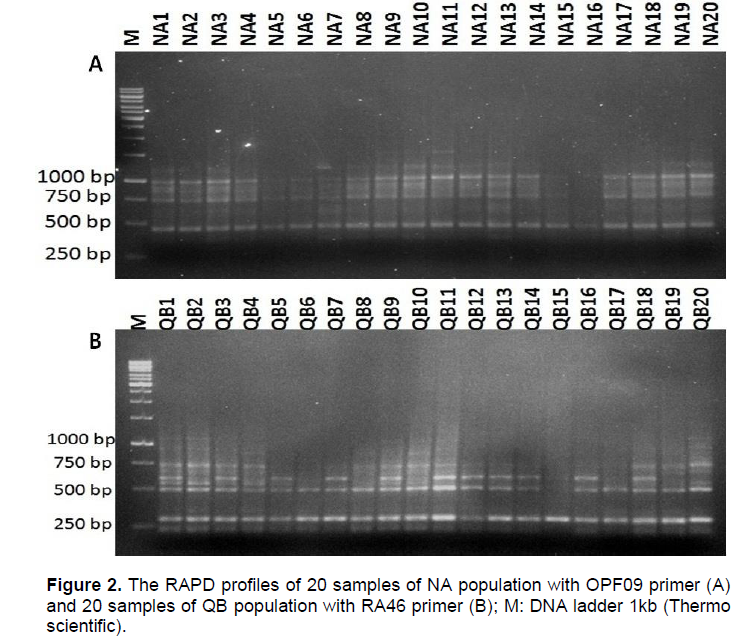 The genetic variation within population is shown in Table 3. The overall genetic diversity of Vietnam pine indicated that the percentage of polymorphic loci (P) was highest for QB (74.67%) and lowest for QN (69.33%) with mean of 72.44%. Furthermore, the NA population revealed the highest value in the number of alleles per locus with 1.627 and QN population allocated at the lowest point with 1.507. Meanwhile, the number of effective alleles per locus was the highest and lowest value at QB (1.442) and NA (1.401), respectively, with an average of 1.424.

The genetic diversity of three populations was established based on PCoA analysis (Figure 3). The PCoA coordinate dimensions accounted for 22.85 and 19.74% of the total variation, respectively. The population divided into two groups where cluster I included NA and QB groups and cluster II contained QN group. 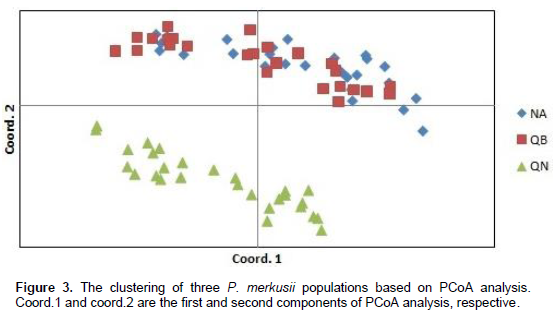 The RAPD markers were successful for analyzing genetic variation in Vietnam pine populations. All the nine RAPD primers expressed high number of bands and PIC (0.82). These results illustrated that RAPD method is a powerful technique for genetic variation analysis of Vietnamese populations. Nei’ gene diversity (h) (0.246) and Shannon’ information index (I) (0.369) of this study suggested a moderate genetic diversity within three Vietnamese pine populations. The moderate genetic diversity within population may be caused by the bottlenecks during the evolutionary processes and the inbreeding after bottlenecked of small populations (Alrababah et al., 2011; Zhang et al., 2005).

The Nei’s genetic differentiation index among populations (Gst) (0.1867) reflected narrow genetic variation among populations. The genetic distances among three populations were low, from 0.042 (NA and QB) to 0.214 (NA and QN). The low level of genetic distance among NA and QB populations was the characteristic of endangered species (Slatkin, 1985). Moreover, the results were caused by the genetic drift, migration, selection or isolation of gene resources (Fisher and Matthies, 1998; Sun and Wong, 2001; Gómez et al., 2010). Other causes were that the local communities selected and breeding of these plants from other locations (Gómez et al., 2010). Furthermore, the QN population was more different than NA and QB caused the geographic distance.

In conclusion, this study suggests that three P. merkusii populations need effective conservation and breeding programs to develop the genetic diversity of resources of pines in Vietnam.

The authors certify that there is no actual or potential conflict of interest in relation to this article.

This study was supported by Applied DNA Technology Department and National Key Laboratory of Gene Technology Institute of Biotechnology, Vietnam Academy of Science and Technology.