Calophyllum brasiliense Cambess is a medicinal tree belonging to the family Calophyllaceae (APG, 2009) that is distributed mainly in the rainforests of Latin America from Brazil to Mexico (Bruneton, 1993). Of the Calophyllum genus, only C. brasiliense exists in Mexico, and its members are restricted and scattered throughout small tropical areas. The species is commonly known as ocú, bari, or leche maria, and traditionally, it has been used in many ways, such as wood, fodder, dye extracts, soap, biofuels and medicine (Stevens, 1980). Current studies have demonstrated that C. brasiliense contains a variety of phytochemicals, including xanthones, coumarins, chalcones, flavonoids and triterpenes, which possess antibacterial (Pretto et al., 2004), anticancer (Ito et al., 2002), antiparasitic (Brenzan et al., 2008) and antiviral activity (Huerta-Reyes et al., 2004). In addition, this species has been highlighted as an important resource of calanolides, dipyranocoumarins that inhibit the reverse transcriptase of human immunodeficiency virus type 1 (HIV-1) (Huerta-Reyes et al., 2004). Due to excessive collection for its medicinal properties and attractive wood, plus its recalcitrant seed’s low viability, its population has decreased drastically (Afolayan and Adebola, 2004; Sorol et al., 2015). Despite its significant medical importance, no studies have developed an efficient system of micropropagation as an alternative for the conservation and restoration of C. brasiliense.

In this regard, plant tissue culture is an important tool in plant biotechnology, making it possible to clone plants (George et al., 2008). As this tool is applied to more species, it becomes more efficient and effective and more widely applied to the propagation and preservation of exceptional species as future resources (Pence, 2014). For instance, studies on Callophyllum apetalum found high in vitro multiplication (74%) with 1 mg L-1 6-benzyladenine (BA) and 2 mg L-1 indole-3-butyric acid (IBA) to induce shoots and shoot rooting, respectively (Nair and Seeni, 2003). A similar study carried out by

Thengane et al. (2006) found the maximal multiple shoots of Calophyllum inophyllum with 0.2 mg L-1 thidiazuron (TDZ). Moreover, when they rooted shoots with 0.50 or 5 mg L-1 IBA alone or in combination with 0.5 mg L-1 BA, were observed results of rooting 52%. Although, these species belong to the same genus, the best method of micropropagating a new plant, such as C. brasiliense, must usually be determined experimentally (Gahan and George, 2008).

This study germinated seeds in vitro and established a micropropagation system for C. brasiliense via nodal segments from germinated plantlets.

We collected mature C. brasiliense seeds in November 2013 from San Andres Tuxtla, State of Veracruz, Mexico. The endocarp and tegument were removed prior to disinfection and the seeds were superficially disinfected using a soap solution for 5 min. Then, they were immersed for 1 h in 27% (v/v) BRAVO® 720 solution as antifungal for 1 h. After they were immersed in a 4.2% (v/v) sodium hypochlorite solution supplemented with Tween-20 (three drops per 100 ml) for 1 h. Finally, under aseptic conditions, the seeds were rinsed three times with sterilized distilled water.

MS (Murashige and Skoog, 1962) culture medium was supplemented with 3% sucrose (w/v), 100 mg L-1 citric acid, 150 mg L-1 ascorbic acid, 250 mg L-1 polyvinylpyrrolidone as an antioxidant solution and 0.18% of phytagel (w/v) (Sigma, St. Louis, MO, USA) to germinate the seeds. The pH of the culture medium was adjusted to 5.8, and the medium was sterilized at 121°C and 15 psi for 18 min. The disinfected seeds were placed in glass test tubes containing 15 ml of culture medium without plant growth regulators (PGRs) to germinate in vitro. Nodal explants from 6-month-old plants were cut in a Petri dish containing the same antioxidant sterile solution mentioned above to prevent browning of the tissue. Explants were placed into Gerber-type flasks (four explants per flask) containing 25 ml of culture medium with PGRs to induce in vitro rooting and shoots. To induce shoots, various concentrations of PGRs purchased from Sigma-Aldrich Co. were added: IBA (0.0 and 0.5 mg L-1) in combination with BA (1.0 and 2.0 mg L-1) or TDZ (0.1 and 1.0 mg L-1). To induce roots, 1.0 and 2.0 mg L-1 of IBA or IAA was added. All the cultures were incubated at 25 ± 2°C with a photoperiod of 16 h with white fluorescent light (60 μmol m-2 s-1). When the seedlings reached approximately 4 cm in height, they were transferred to polyethylene bags containing a mix of agrolite, peat moss and soil (1:1:1).

The statistical analyses were performed with SAS 9.0 software. All data were subjected to an analysis of variance followed by the Tukey-Kramer multiple media comparison test with a significance of 0.05. All the laboratory experiments were done in duplicate with three replicates. A completely randomized experimental design was used.

After 12 days of culture, 48.6% of the seeds had germinated (Figure 1a). Although, the germination percentage was low (less than 50%), this percentage was slightly higher than the germination percentage (36%) previously reported in ex vitro conditions (Bernabé-Antonio et al., 2010). The seedlings cultured in vitro exhibited good development after 6 months (Figure 1b). The low percentages of germination may be due to C. brasiliense seeds being recalcitrant (that is, intolerant to desiccation and low temperatures), and thus, tending to lose their viability rapidly (Sorol et al., 2015). In this work, the seeds were collected after their physiological maturity, and the embryos may have lost moisture before sowing in vitro. In addition, the seeds are likely to have a chemical latency that prevents germination. For example, when Garcinia spp. seeds (a species taxonomically close to C. brasiliense) were germinated under in vitro conditions with BAP (2.5 mg L-1) 100% germination was achieved (Mohan et al., 2012).

All culture media containing PGRs induced shoots (Figure 1c) and explant browning was prevented with an antioxidant solution. Significant differences (P ≤ 0.5) were found in all the variables evaluated (Tables 1 and 2). The cytokinin TDZ was observed to be more suitable than BA when they were combined with IBA. The treatment 0.50 mg L-1 IBA combined with 0.1 mg L-1 TDZ resulted in the maximum shoot induction (77.5%), shoots per segment (6.9), nodes per shoot (3.8), leaves per shoot (8.0) and shoot length (4.2 cm) (Figure 1d). When the shoots were excised from the proliferous node and grown in MS medium without PGRs, they showed good development (Figure 1e). TDZ is a cytokinin-like substance for woody plant tissue culture and facilitates the efficient micropropagation of many recalcitrant woody species when low concentrations (0.22 mg L-1 TDZ) are used (Huetteman and Peece, 1993). In this work, a decrease in the values of the variables was observed when 1.0 mg L-1 TDZ was used. Similar studies were carried out by Thengane et al. (2006) that reported concentrations of 0.2 mg L-1 TDZ were used to induce the largest number of shoots in C. inophyllum and Akbaş et al. (2009) that observed similar concentrations of BA (1 mg L-1) were suitable for inducing shoots from Amygdalus communis nodal segments. Furthermore, the highest frequency of organogenetic response of explants were obtained on shoot buds of Rumex tianschanicus x Rumex patientia cultured with low concentrations of IAA (0.17 mg L-1) or 2.2 mg L-1 BA (Ślesak et al., 2014). These results suggest that the organogenetic response depends on genotype (Ċosiċ et al., 2015). Although, general methodologies can be established for plant tissue culture, even closely related varieties of plants can differ in their culture requirements. Therefore, the best method of micropropagating a new plant, such as C. brasiliense, must usually be determined through experimentation (Gahan and George, 2008).

Significant differences (P ≤ 0.5) were found in shoot rooting from C. brasiliense (Table 2). IBA and IAA induced rhizogenesis in shoots (Figure 1f); however, the rooting percentages with IBA were lower than those with IAA (Table 2). The highest percentage of shoot rooting (63.5%) occurred with 1.0 mg L-1 IAA, but this value was not statistically different when 2.0 mg L-1 IAA was added to the culture medium. In addition, 1.0 mg L-1 IAA exhibited the maximum root length (2.2 cm), whereas the largest number of roots was displayed in the presence of 1.0 mg L-1 IBA. The seedlings that exhibited the greatest height were acclimatized in pots and 77.5% of the plants survived transplantation after 3 months (Figure 1g). Thengane et al. (2006) demonstrated that roots were more easily induced with IBA (0.5 mg L-1) without supplementation of any cytokinin in C. inophyllum. Likewise, Thengane et al. (2006) found a higher percentage of acclimatization when using only IBA. A similar C. apetalum study reported improved shoot rooting and acclimatization with larger concentrations of IBA (2.0 mg L-1) (Nair and Seeni, 2003). In contrast, some species, such as Hibiscus cannabinus L., showed reduced rooting in explants when cytokinins or auxins were added (Ayadi et al., 2011). Contrary to these reports, IAA auxin was the most suitable for rooting shoots of C. brasiliense in this study. 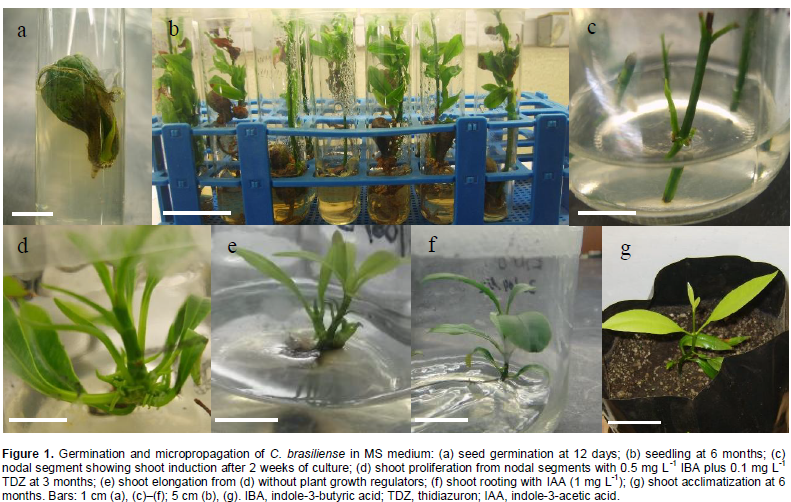 This study is the first investigation of the regeneration of C. brasiliense and can be directly used as a potential tool for replenishing the plant’s declining populations in the wild. About 50% of in vitro seed germination was achieved in this work. Using nodal explants, a high percentage of induction and shoot proliferation was achieved with 0.5 mg L-1 IBA plus 0.1 mg L-1 TDZ and the maximum shoot rooting was seen with 1 mg L-1 IAA. In addition, 77.5% of the plants grew easily in potted conditions. However, further detailed research is needed to improve the shoot multiplication and rooting ability of C. brasiliense. Further studies are needed to determine whether the seedlings grown in vitro retain the ability to produce calanolides or other biologically active compounds.