Callus induction for somatic embryogenesis from Simarouba glauca DC leaf explants of three genotypes (S. glauca 5, S. glauca 19 and S. glauca 21) was studied. Leaf explants (leaf segments from basal, middle and tip of the leaves) were cultured on two types of nutrient media; SGC1 and SGC2. Both media contained Murashige and Skoog (MS) medium with vitamins: 100 mg/L ascorbic acid, 0.5 mg/L 6-benzylaminopurine (BAP), 0.5 to 5.0 mg/L NAA (1-napthaleneacetic acid), and 3.0 g/L sucrose. The SGC2 media additionally contained 0.5 to 5.0 mg/L 2,4-dichlorophenoxyacetic acid (2,4-D). SGC2 media generated better callusing response compared to SGC1, thus displaying the importance of using 2,4-D in combination with NAA for callus induction. MS medium containing 2.5 mg/L NAA (SGC1.5) was noted to be the most effective in the initiation of friable embryogenic callus. On the other hand, MS medium containing a combination of 2.0 mg/L NAA and 2.0 mg/L 2,4-D was effective in the early initiation of friable embryogenic callus. In addition, a higher frequency of callus formation was observed from basal leaf segment as compared to that from middle and apical leaf segments. A random amplified polymorphic DNA (RAPD) analysis was also performed to see the genetic differences between the three S. glauca genotypes used in this study. The performance of S. glauca 5 and S. glauca 19 for higher callus frequency over the S. glauca 21 could be attributed to the genotypic differences between these genotypes. Overall, our protocol using SGC 2.4 media yielded optimal results and is suitable for large scale micropropagation of S. glauca.
Key words: Simarouba glauca, somatic embryogenesis, callus, plant growth regulators, RAPD and biofuel.

Simarouba glauca DC, commonly known as “paradise tree”, is an emerging and promising plant for biofuel production. At approximately 65% oil seed content, when compared to current sources of biofuels, such as Camelina’s 43% oil seed content, the S. glauca tree produces a much higher oil yield (Zubr, 1997). Each fully grown tree yields 15 to 30 kg nutlets, which is equivalent to 2.5 to 5.0 kg of oil. Although, S. glauca has the potential to be an effective second generation biofuel crop, it requires a long pre-bearing period (5 to 6 years) to mature and bear seeds (Mansai and Gaikwad, 2011). The tissue culture technique, micropropagation, can rapidly multiply elite S. glauca germplasm. Somatic embryogenesis via callus route is preferred to the in vitro regeneration method because it is a useful tool for recovery of large number of plants with little somaclonal variation and also to recover genetically modified plants (Manasi and Gaikwad, 2011). Despite its promise as an effective biofuel source, little scientific research has been performed on in vitro propagation of S. glauca. Rout and Das (1994) reported somatic embryogenesis from immature cotyledon of S. glauca using 6-benzylaminopurine (BAP) and 1-Naphthaleneacetic acid (NAA). Of these, 20 to 25% of somatic embryos were regenerated into plants. It is well known in tissue culture that different genotypes of a species respond differently to a combination of hormones due to their underlying genomic variation (Rutkowska-Krause et al., 2003; Bregitzer et al., 1998). However, most Simarouba genotypes respond quite well to different combinations of auxins and cytokinins for induction of callus (Das, 2011).

Using a similar technique, Das (2011) showed that 2,4-D was effective for callus induction from cotyledons. S. glauca is an outcrossing species, thus, the genotype of cotyledon explants are ambiguous. Hence, to clone an elite S. glauca tree, regeneration from a vegetative part of the tree (shoot, leaf explants) is essential. A callus based regeneration system is necessary to assist genetic transformation of S. glauca to achieve quick genetic improvement. Therefore, we studied regeneration of S. glauca from leaf explants through a callus based, somatic embryogenesis system.There was a significant difference in the in vitro responses (callus induction and subsequent regeneration) of the three S. glauca genotypes we studied. Seeds were obtained from an open pollinated Simarouba nursery in Florida, USA. Each seed was grown individually as a plant in a greenhouse under controlled conditions and assigned a number. Three plants with promising physiological characteristics were chosen for the current study (SIM 5, SIM 9 and SIM 21). For this reason, we used a Random Amplified Polymorphic DNA (RAPD) analysis, which uses random primers to detect DNA polymorphisms in order to determine if there was identifiable genetic variability between the genotypes studied. Endogenously present PGRs in leaves are known to play an important role in tissue culture, by interacting with PGRs added to the nutrient media. For example, different segments of leaves have different levels of auxin (Davies, 2004). For a clearer understanding, each leaf blades were cut into four segments: the tip, two middle segments and the base (near the petiole).

The three different genotypes (two year old seedlings) of S. glauca used in this study were maintained in the climate controlled greenhouse at Penn State University Harrisburg. Young, fully developed leaves (1st to 3rd leaf) from the tip were examined. The leaves were washed with 5% Tween 20® for 10 min and moved to the laminar flow cabinet for surface sterilization and inoculation. Washed leaves were surface sterilized first with 10% Clorox® bleach for 5 min, then followed by 100 mg/l mercuric chloride for 4 min, which were then rinsed several times with sterile distilled water.

After surface sterilization, the leaves were cut into 4 equal size pieces; the apex, two middle parts (mid1, mid2), and the basal segment. All explants were inoculated on different media’s (SGC1.1- SGC1.10 and SGC21.1- SGC21-10). The explants were placed with their adaxial or abaxial side touching the media in equal numbers, all of which were incubated in a TC60 growth chamber (Conviron®) at 25 ± 2°C in the dark. Sixteen explants were cultured into each media type and of the 16 explants, four were tip, four were mid1, four were mid2, and four basal explants. The explants were sub-cultured into fresh media every four weeks. The experiment was repeated with a similar number of replicates. 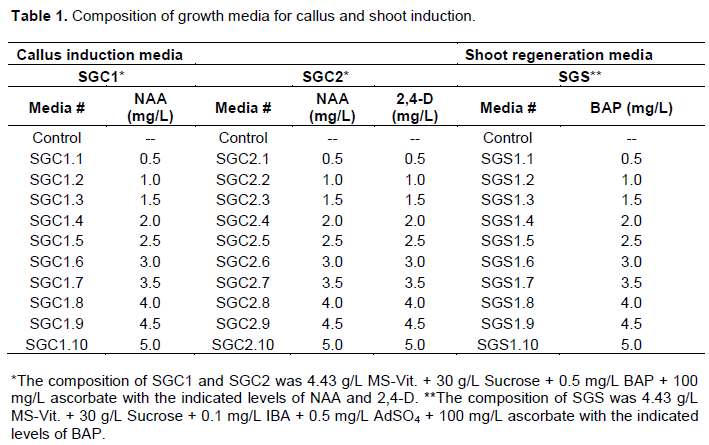 Observations were taken every three to four weeks. For each type of media, the number of calli growing from each of the 16 explants was noted and the percent of callus was obtained. Letters “L” for Loose and “F” for Friable were assigned to the type of morphology the callus exhibited. The callusing frequency was calculated as:

Total genomic DNA was extracted from young leaves using DNAzol (Life Technologies). The DNA quality and quantity was determined by Nanovue spectrophotometer and the comparison was done with standard DNA electrophoresis on 0.8% agarose gel. Initially, a total of 15 primers were screened to achieve reproducible PCR product (Table 2). All primers were analyzed for understanding polymorphic relationships between SIM 5, 19 and 21 and to build the UPGWA tree in Figure 4. The primer OPG-3 was selected for PCR amplification and the subsequent RAPD analysis. PCR amplifications were performed in triplicate using a PCR master mix from Promega in a 25 μL reactions containing DNA template. The amplification program was as follows: initial denaturation at 94°C for 1 min followed by 40 cycles of 94°C for 1 min; 36°C for 45 s; 72°C for 1 min, and a final extension at 72°C for 5 min. The PCR products were separated on 1.2% agarose gel and photographed. For RAPD analysis reproducible, unambiguous DNA bands were scored as 1 for the presence or 0 for the absence of bands in each lane. The RAPD data obtained was analyzed using the online tool http://genomes.urv.cat/UPGMA/index.php?entrada. 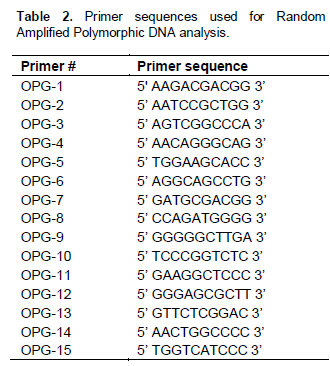 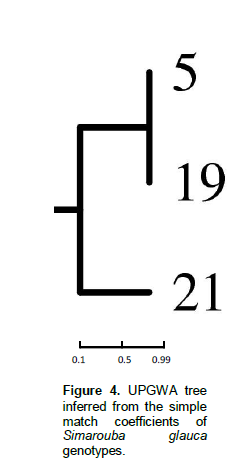 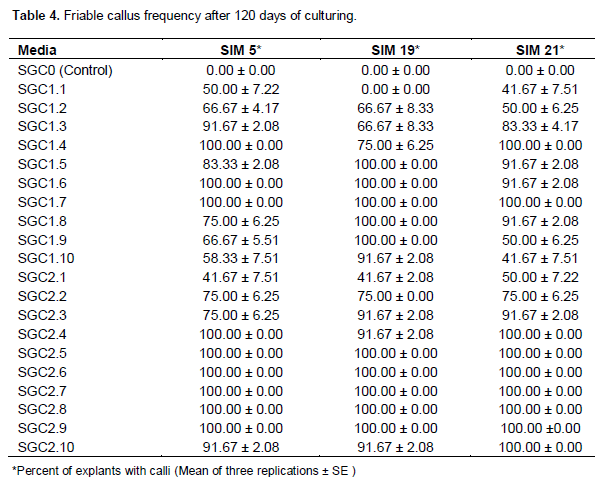 Genetic variation among S. glauca genotypes was studied using random amplified polymorphic DNA method. The genomic polymorphisms of the three genotypes of S. glauca produced with primers OPG-4 are presented in Figure 4. All genotypes yielded 1-10 PCR-amplified DNA fragments that ranged between 100 and 2000 bp (Figure 3). Only fragments with a high intensity were taken into account. The DNA polymorphism of SIM 19 and 21 were similar to each other, but different from that of genotype S. glauca 5 (Figure 4). Thus, the genotypes with high callus induction frequencies were found to be similar than the genotype with low callus induction rate.

Paradise tree, S. glauca, is a promising biofuel plant for both its high oil content and its adaptability to grow in a wide range of climate. In the present study, an optimum system of callus generation in S. glauca was investi-gated. Different combinations and concentrations of auxins and cytokinins have been used to induce callus in S. glauca (Rout and Das, 1994; 1999). In the present study, we tested two sets of media, SGC1 and SGC2.

Callus induction media SGC1 had increasing concentrations from 0.5 to 5.0 mg/L, while SGC2 had increasing concentrations of both NAA and 2,4-D from 0.5 to 5.0 mg/L. Previous studies have shown that 2,4-D when combined with NAA has a synergistic effect on the callus formation (Das, 2011). Our study shows that NAA, along with 2,4-D, is more efficient in initiating callus from leaf explants than NAA alone. The leaf explants showed faster response on SGC1 compared to SGC2 at 30, 60, 90 and 120 day time point. After 120 days, SGC2 had comparatively higher callusing frequencies in each media compared to SGC1. The combination of NAA with 2,4-D was also effective in obtaining friable callus from an already induced callus. The observation taken on 120 day time point indicated that 100% friable callus was obtained from media SGC1.5 - 2.9. Moreover, previous reports have indicated that the combination of 2,4-D with other auxins improved callus initiation (Debeaujon and Branchard, 1993; Khan et al., 2011; Qin Mao et al., 2006). Once the callus initiation is started, one auxin is sufficient to produce friable callus as in case of cucumber (Elmeer and Hennerty, 2008). Previous studies showed that high levels of auxins are required for the induction of embryogenic callus; however, cytokinins are critical for somatic embryo formation (Palmer and Keller, 2011; Webster et al., 2006). Shooting was also initiated from friable callus. Our experiments recorded an average number of 7.5 shoots per callus mass on media supplemented with 3.0 mg/L BAP (Table 6). 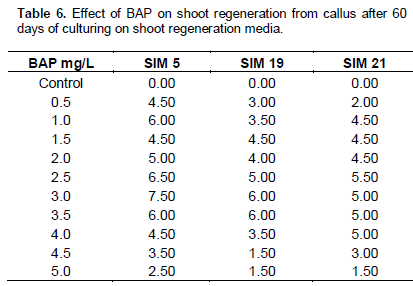 However, a combination of NAA and 2,4-D could be used on a wider selection of S. glauca genotypes for callus initiation leading to the production of friable callus; in this case, all the genotypes performed well in obtaining friable callus on SGC2 media and could be used in future studies of plant regeneration and transformation. Sepa-rating the leaf segments revealed that the base of the leaf gave the highest callus responses than the tip of the leaf. This indicated the role of important endogenously present PGRs at the basal level of the Simarouba leaf that interact with exogenous substances in the media supple-mented. Levels of endogenous growth regulators vary, not only among different plant organs, but also among different tissues of the same organ. Our study indicates that the highest callus response comes from the basal part of the leaf rather than the tip of the leaf. The Ye et al. (2012) study on callus induction in Zizyphus jujuba found that the basal section had higher frequency of callus formation compared to the apical and middle sections of the same leaf, underlining the fact that harmonized levels of endogenous and exogenous growth regulators are required to yield better results (Davies, 2004).

Since, S. glauca is highly cross-pollinated, the genetic variation observed in the present study could be due to heterozygosity at some marker loci. However, further studies are required to ascertain if these loci could be associated to the difference in callus induction in these genotypes. These loci could be used as molecular markers to screen the S. glauca genotypes for high callus initiation response. Our results indicate that SGC 2.4 media produced optimum results and is economical in the long run for large scale micropropagation of S. glauca or for establishing a regeneration system for genetic transformation.

This work was supported through funding by the National Science Foundation – REU, the Pennsylvania Department of Community and Economic Development. Additional support provided by Kunj Biotech, LLC, Ernst Conservation Seeds of Meadville, PA, and UGI Utilities.