Nannochloropsis gaditana is a microalgae belonging to the class of Eustigmatophyceae. This particular microalga is the most studied species. For its richness in lipids, it is used for the biodiesel production. The aim of this work is to advance another important metabolite which is cellulose. This represents 25% of the dry weight of the N. gaditana. A low concentration of NaOH (2%) and sodium hypochlorite (6%) allowed the obtainment of relatively pure cellulose analyzed by Fourier transform infrared (FT-IR) and X-Ray Diffraction (XRD). The progress of the microalgae mass production could help in the substitution of the cellulose of microalgae for the vegetal cellulose, as seen in the simple technical extraction, the yield and the procurement of uncontaminated molecule with lignin. This substitution will contribute in protecting the environment.

Nannochloropsis gaditana is a microalgae that belongs to the class of Eustigmatophyceae (Andersen, 1998). It has five species and they are: N. gaditana, N. salina, N. oculata, N. oceanica and N. limnetica (Hibberd, 1981; Lubian,1982; Karlson et al.,1996; Krienitz et al.,2000 Suda et al.,2002) . The gaditana and salina species are recently reported as two strains belonging to the same species (Shawn et al., 2014). N. gaditana is rich in lipids and produces mass biodiesel (AttilioConverti et al., 2009; Rodolfi et al., 2009; Pal et al., 2011; Bondioli et al., 2012). The cell wall of N. gaditana is comprised a bilayer structure consisting of a cellulosic inner wall (∼75% of the mass balance), protected by an outer hydrophobic algaenan layer (Scholz et al., 2014). To meet with the global needs of cellulose (the textile, paper, plastic, paint, chemistry, pharmaceutical and cosmetic field) and vegetable, a wide deforestation and environmental damage is involved. The substitution of the parietal compounds of the plant source by those microalgae is possible and can present several advantages. Reasons being that: (i) the growth of microalgae is quick and harvesting is done continually throughout the year (Gouveia, 2011); (ii) they can grow in saline aqueous areas, waste  water  and  brackish water (Gouveia, 2011)  or even in wasteland (Demirbas, 2011); (iii) their production contributes to a better CO2 sequestration than plants (Gouveia, 2011).

The mechanical properties of the cellulose determine its use. These properties depend on the spatial structure obtained after extraction by chemical treatment (Morán et al., 2008). The aim of this study is to extract the main parietal compound of N. gaditana (cellulose) at different concentrations of extraction reagents. The quality of cellulose is analyzed by Fourier transform infrared (FT-IR) and by X-Ray Diffraction (XRD). Cellulose is a linear homopolymer consisting of anhydroglucopyranose units (AGU), connected by glycosidic linkages in β - (1-4). The chains are linked by hydrogen bonds fashioned by covalent bonds formed between C1 of one monomer in one strand and a C4 in an adjacent strand.

N. gaditana is mass produced by the company: PARTISANO BIOTECH Algeria in Oran and the samples are provided in dried powder form.

The extraction method of algae cellulose was a modification of Jayme-Wise method (Leavitt and Danzer, 1993; Gaudinski et al., 2005; Rosli et al., 2013), initiated with the de-waxing of algae by treating micralgae with toluene: ethanol. Five gram (5 g) of micro algae dry powder were treated with a mixture of toluene/ ethanol (68:32) (v/v) for 24 h using magnetic stirring. After filtration, the parietal residue was separately treated with 2 or 4% NaOH for 2 h at 80°C, to eliminate Hemicelluloses. Bleaching is performed with sodium hypochlorite (6 or 10%) at pH 4.8, stirred for 2 h at 70°C. The cellulose pellet recovered by centrifugation was dried using lyophilization and weighed. The extraction was carried out in triplicate.

Analysis of cellulose by FTIR spectroscopy

FTIR spectra of the cellulosic samples were measured with FTIR alpha Brucker .The resolution of 26 scan were taken with the frequency range of 4000 to 400 cm-1 in the transmission mode.

The cellulose samples were analyzed from 4 to 70° (2q) with a pitch of 0.02° and measuring 1s of acquisition time by an R-X diffractometer.

Cellulose obtained after extraction and dried is 25% of the dry weight of the microalgae, N. gaditana.

Analysis of the cellulose by FT-IR

The infrared spectra of cellulose were studied in the literature (Nelson and O’Connor, 1964; Oh et al., 2005; Alvarez and Vazquez, 2006; Yang et al., 2007). The analysis by FTIR of the extracted cellulose from 2% NaOH and 6% NaClO2 (Figure 1) is carried out to identify polysaccharide and to determine its contaminants such as: hemicelluloses, lipids and proteins.The spectrum obtained (Figure 1) revealed a broad band in the 3600 to 3100 cm-1which correspond to the (- OH). The peak occurred at 3283 and 3272 cm-1, which indicated the presence of hydroxyl groups in algae cellulose and carboxymethyl cellulose respectively. The peaks 2929/2857 and 2880 cm-1 corresponded to the (-CH) groups stretching vibration in cellulose algae and caboxymethyl cellulose (Oh et al., 2005; Nelson and O’Connor, 1964).

The peak presented at 1735 cm-1 in the spectrum corresponding to the cellulose obtained from 2% NaOH and 6% NaClO2 could be, due to the presence of small amounts of hemicelluloses, which contain higher C=Olinkage at 1765 to 1715 cm-1. Another possibility is that carboxyl or aldehyde absorption (1736cm-1) could be arising from the opened terminal glycopyranose rings (Morán et al., 2008). The carboxyl may be due to the presence of lipids. The Cellulosic wall N. gaditana is protected by algaenan which is a lipid structure (Scholz et al., 2014). The current analysis of the cellulose extracted in our study by NMR reveals the presence of lipids (Stuart Jones, personal comm.).However, the extraction of cellulose in higher concentrations NaOH2 to 4% to get a better solubilization of hemicelluloses followed by bleaching with hypochlorite6% (Figure 2) does not reduce the peak intensity1735cm-1.The hemicelluloses are principally extracted with 2% NaOH. This peak also corresponds with the functional groups aldehyde and carboxyl (Morán et al., 2008). 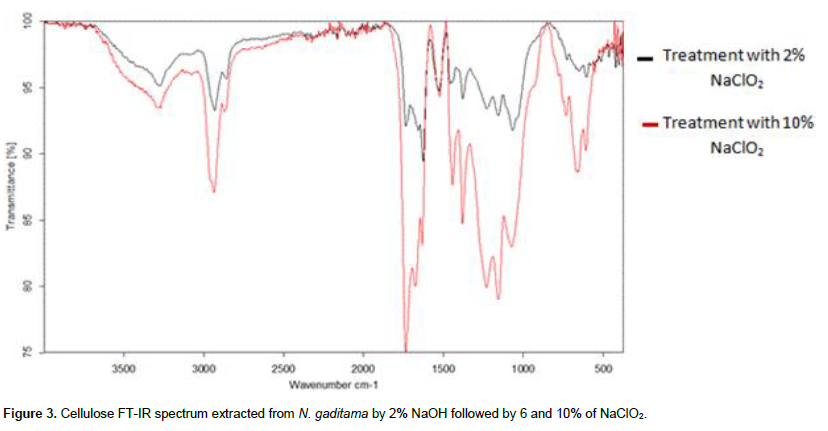 Analysis of cellulose by XRD

In order to identify the crystalline and amorphous areas of celluloses obtained in this work, a diffractometry X-Ray was carried out. Cellulose samples obtained at different concentrations of NaOH (2 and 4%), followed by bleaching with 6% sodium hypochlorite, and another obtained after treatment with 2 and 4% NaOH, followed by 10% hypochlorite bleach were analyzed (Figure 4). 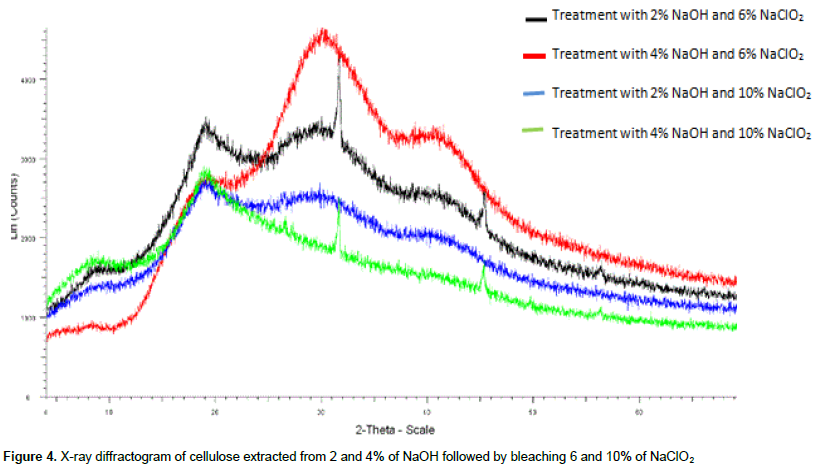 The XRD confirmed the hypothesis that the variable of NaOH concentration of  2  to  4%  shows  an  amorphous structure, which becomes increasingly abundant to a maximum concentration of 10% sodium hypochlorite.

N. gaditana is rich in cellulose. This compound would represent 25% of the dry weight of the microalgae. The FTIR analysis of the cellulose extract identified the functional groups of the cellulose and its contaminants. The XRD analysis tracked the structural change (crystalline, amorphous) of the cellulose taken out based on the extraction mode. During extraction, the NaOH is used to remove hemicellulose and the NaClO2 bleaching removes other contaminants. According to the results, 2% NaOH seemed sufficient to extract most of the hemicellulose. An increase to 4% NaOH did not diminish the intensity of the peak 1735 indicative of the hemicellulose carbonyl group. However, the intensity of the functional groups of the cellulose peaks is important. The concentration of 4% NaOH appears to have altered the semi-crystalline structure in amorphous structure making them a more accessible functional group. XRD analysis confirmed the hypothesis that Cellulosic extract obtained in 2% NaOH is semi-crystalline, and at 4% NaOH, the cellulosic extract is amorphous. Similarly, bleaching seemed to affect the cellulosic extract structure. Whereas, 2% NaOH followed by a bleach of 6% NaClO2 cellulosic extract is semi-crystalline. An increase in the concentration to 10% NaClO2 yielded the amorphous structure. These observations were concluded from the FTIR spectra and RXD diffraction patterns. This "amorphous" property has an industrial interest. The functional groups are more accessible and thus esterifiable. However, the cellulosic extract obtained remained contaminated with lipids and proteins. These two compounds are incorporated into the cell wall. Aggressive physicochemical treatment given to remove these contaminants, may damage the fragile spatial structure of the cellulose extracted. The extraction method must be gentle not to alter the structure of cellulose and should be strong enough to remove contaminants. N. gaditana is a unicellular organism. Its cell wall is less complex than that of higher plants known for their high lignin. Lignin is the major contaminant in the extraction of cellulose. Cellulose microalgae would be an alternative to replace the cellulose of higher plants. However, the choice of the extraction process is important. Improper process can damage the cellulose structure (Moon et al., 2011).

The author extends their thanks to Partisano Biotech Company   Algeria,   for   providing   the    microalgae   N. gaditana to laboratory AQUABIOR. They are also thankful to Professor BELBACHIR Mohamed for the help, as well as Chemistry Laboratory, Polymers University of Oran 1 - Ahmed Ben Bella, Algeria.