The objective of this study was to develop an efficient regeneration protocol in big bluestem, a potential feedstock that produces huge biomass. Embryogenic calli were induced from the seeds of cultivars, Kaw and Earl, on Murashige and Skoog (MS) medium with different concentrations of 2,4-dichlorophenoxyacetic acid (2,4-D) (0.2, 0.5, 1.0, 2.0, 3.0 and 5.0 mg l-1) alone or in combination with 6-benzylaminopurine (BA) (0.5 mg l-1) or L-proline (2.0 g l-1). In Kaw, the highest number of embryogenic calli (39.1%) was induced on MS + 0.5 mg l-1 2,4-D and L-proline, whereas in Earl, the highest number of embryogenic calli (39.8%) was obtained on MS medium containing 1.0 mg l-1 2,4-D and L-proline. The embryogenic calli were then transferred to regeneration media (MS medium supplemented with kinetin, 0.2, 0.5, 1.0, 3.0 and 5.0 mg l-1 or BA, 0.2, 0.5, 1.0, 3.0 and 5.0 mg l-1). Shoots were regenerated on all of the concentrations tested and the regeneration percentage and number of shoots per calli increased with the increase in BA or kinetin concentration. Regenerated shoots were transferred to half strength MS medium for rooting. The fully developed plantlets were established in the greenhouse. The regeneration protocol established in this study may be used for the application of genetic engineering technologies in big bluestem.

Big bluestem (Andropogon gerardii Vitman) is a warm-season (C4) perennial grass native to North America (Boe et al., 2004). It is adapted to most native prairie ecosystems and comprises as much as 80% of plant biomass in prairies in the North American Mid-western grassland (Gould and Shaw, 1983; Knapp et al., 1998). Compared  to  switchgrass  (Panicum  virgatum   L.)   and Indiangrass (Sorghastrum nutans (L.) Nash), big bluestem produces twice the biomass due to its efficient nutrient utilization (Johnson and Matchett, 2001). Currently, big bluestem is considered a potential biomass feedstock for lignocellulosic ethanol production (Zhang et al., 2012). However, the biggest limiting factor in the efficient utilization of  plant  biomass for  cellulosic  bio-fuel  is  the presence of the ligno-hemicellulose complex that prevent the enzyme cellulase from effective conversion of biomass to biofuel (Sticklen, 2008). While approaches such as acid or heat pre-treatment are being used to break the ligno-hemicellulosic complex, genetic engineering technology holds great promise for reducing lignin content in biomass through down-regulation of lignin pathway genes (Hisano et al., 2009). Such an approach requires an efficient plant regeneration system, which is not available for a number of important cultivars in big bluestem.
Despite its importance as a potential bioenergy grass, very few studies have been carried out on in vitro regeneration of big bluestem (Chen et al., 1977; Chen and Boe, 1988; Li et al., 2009a). Chen et al. (1977) and Chen and Boe (1988) regenerated plants from calli that were induced from young inflorescence on Linsmaier and Skoog (LS) medium supplemented with 5.0 mg l-1 of 2,4-dichlorophenoxyacetic acid (2,4-D) and 0.2 mg l-1 kinetin. Li et al. (2009a) obtained embryogenic calli from mature seeds on LS medium containing 2.0 to 4.0 mg l-1 2,4-D for big bluestem cultivars Bison and Bonilla. Cultivars such as Bison and Bonilla are well adapted to US Midwest and Western states; however, a regeneration system is not available for cultivars that are adapted to US Southern states such as Arkansas and Texas.
The objective of this study was, therefore, to establish an efficient regeneration system from the calli of mature seeds in big bluestem cultivars, Kaw and Earl, that are well adapted to the southern US. Mature seeds are considered an important source of explants, as they are readily available and used frequently for in vitro regeneration (Li et al., 2009a; Lee et al., 2006, 2008).

Plant materials
Mature seeds of big bluestem grass cultivars, Kaw and Earl, were obtained from Turner Seeds, Breckenridge, TX, USA. The seeds were sterilized with 70% ethanol for 30 s, followed by 20% commercial bleach (sodium hypochlorite, 5.25%) containing two drops of Tween 20 (MP Biomedicals, LLC, Aurora, Ohio, USA) for 45 min, and then washed three times with sterile distilled water for 5 min each.
Callus induction
Sterilized seeds were cultured for callus induction on petri plates containing MS (Murashige and Skoog, 1962) medium supplemented with 2,4-dichlorophenoxyacetic acid (2,4-D) (0.2, 0.5, 1.0, 2.0, 3.0 and 5.0 mg l-1) alone or in combination with 6-benzylaminopurine (BA) (0.5 mg l-1) or L-proline (2.0 g l-1). The components of MS medium as well as growth regulators, 2,4-D and BA were obtained from Sigma-Aldrich (St. Louis, MO, USA). L-Proline was obtained from Caisson Labs (Logan, UT, USA). Media were supplemented with 30 g l-1 of sucrose (PhytoTechnology Laboratory, Shawnee Mission, KS, USA); pH was adjusted to 5.7 with 1 N NaOH before sterilizing at 121°C (120 kPa for 20 min) and the media were solidified  with   4.0 g l-1   Gelzan   (Phyto  Technology   Laboratory).
Callus induction was performed under dark at 28°C (Isotemp Incubator, Fisher Scientific, Hanover Park, IL, USA). Primary shoots from seed were removed 10 days after inoculation and subculture was done 3 weeks after inoculation on the same medium. Overall 18 treatments were tested for embryogenic callus induction in each cultivar. The frequency of embryogenic calli was calculated by: [the number of seeds producing embryogenic calli/the number of seeds germinated on callus induction medium] × 100.
Shoot regeneration, rooting, and plant establishment
Embryogenic calli were transferred to regeneration medium for shoot regeneration. Regeneration media contained MS medium supplemented with kinetin (0.2, 0.5, 1.0, 3.0 and 5.0 mg l-1; Sigma-Aldrich) or BA (0.2, 0.5, 1.0, 3.0 and 5.0 mg l-1) and 30 g l-1 of sucrose); pH was adjusted to 5.7 with 1 N NaOH before sterilization and the media were solidified with 4.0 g l-1 Gelzan. The cultures were incubated in a plant tissue culture chamber at 25°C under 16 h photoperiod (Percival Scientific, Perry, IA, USA).
After 4 weeks, the regenerated plants were transferred to rooting medium. Rooting medium contained half-strength MS medium with 30 g l-1 of sucrose; pH was adjusted to 5.7 with 1 N NaOH before sterilizing and the medium was solidified with 4.0 g l-1 Gelzan. The rooting was carried out in a plant tissue culture chamber under a 16 h photoperiod at 25°C (Percival Scientific, Perry, IA, USA). Rooted plants, after 2 to 3 weeks, were transferred to peat pellets for 1 week for hardening and then to the greenhouse for further growth.
Experimental design and statistical analysis
The experiment was conducted in six replicates with 25 seeds per treatment and data presented here represent an average of six experiments. The experiment was performed as a completely randomized design. To assess the treatment effects, the percentages of primary calli, embryogenic calli and shoot regeneration were subjected to Analysis of Variance (ANOVA) and mean separation was performed using least significant difference (LSD) with SAS software, version 9.2 (SAS Institute Inc., 2008). 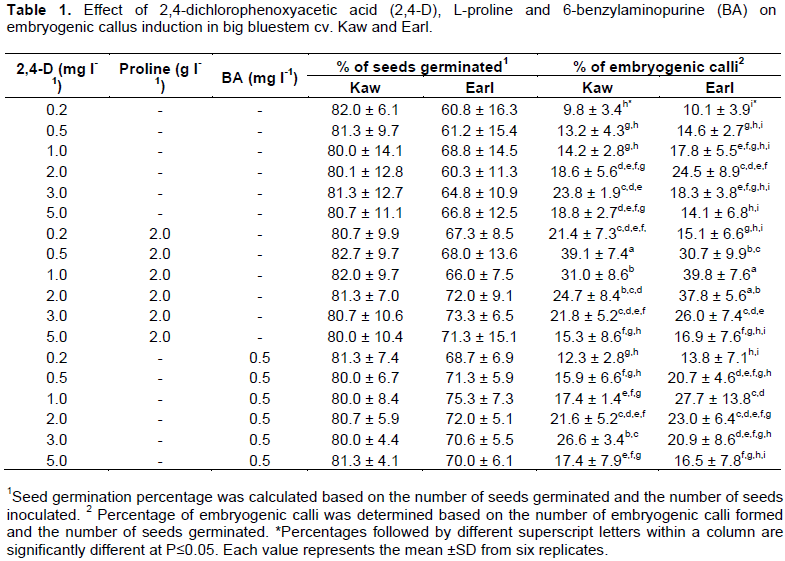 Effect of 2,4-D on embryogenic calli induction
Callus was initiated 7 days after inoculation of Kaw and 10 days after inoculation of Earl on MS medium containing different concentrations of 2,4-D. The callus thus formed was white and non-nodular (Figure 1a). After 3 weeks, callus was sub-cultured onto the same medium. After 1 week of subculture, nodular structures, which were smaller in size, light yellow, friable and fast-growing, started  appearing  on  the  outer  surface of the calli. The fast growing nodular calli were recognized as embryo-genic (Figure 1b), while the larger, white, slow growing non-nodular calli were identified as non-embryogenic (Figure 1a). The formation of two distinct calli, embryogenic and non-embryogenic, with different regeneration potential is an important characteristic of cereals and grasses (Pola et al., 2008). The auxin 2,4-D has been successfully used to induce embryogenic calli in grasses such as big bluestem (Chen et al., 1977; Chen and Boe, 1988; Li et al., 2009a), Indiangrass (Chen et al., 1979; Li et al., 2009b), Brachypodium (Zombori et al., 2011) and little bluestem (Schizachyrium scoparium (Michs.) Nash) (Songstad et al., 1986; Li et al., 2009a). In our study, 23.8% of germinated seed produced embryogenic calli on MS medium containing 3.0 mg l-1 2,4-D in Kaw and 24.5% of germinated seed produced embryogenic calli on MS medium with 2.0 mg l-1 2,4-D in Earl (Table 1). The percentage of embryogenic calli induced in our study is comparable to the percentage of embryogenic calli (23.1%) obtained with the supplementation of 2,4-D in other big bluestem cultivars, Bison and Bonilla (Li et al., 2009a). 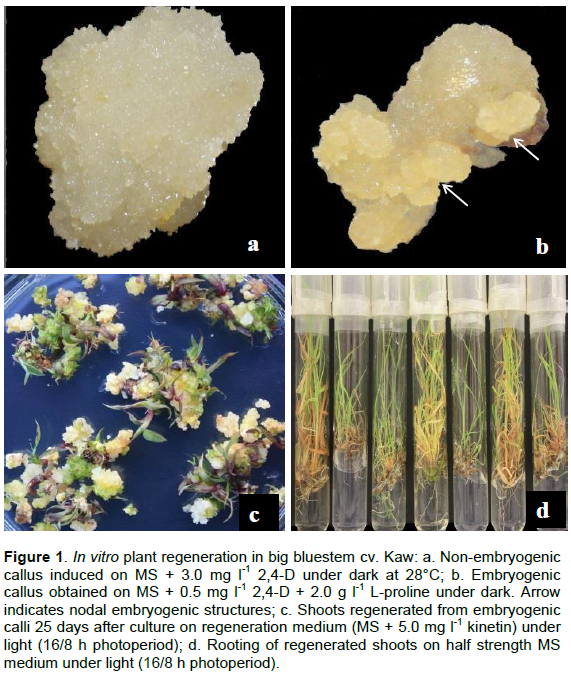 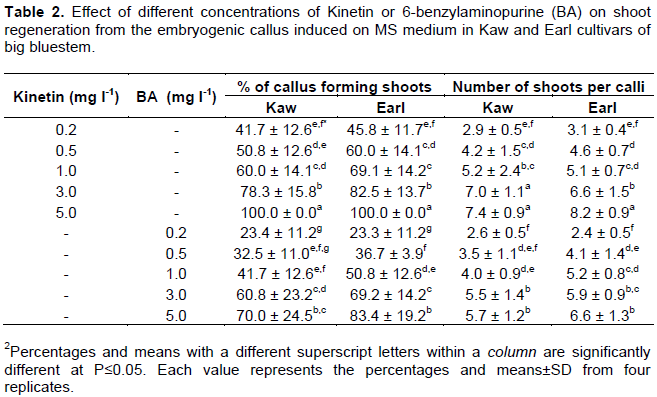 Rooting and plant establishment in greenhouse
More than 90% of the regenerated shoots were success-fully rooted on half strength MS without the addition of growth hormones. A similar percentage of rooting was achieved in big bluestem cultivars, Bison and Bonila (Li et al., 2009a). Fully rooted plants were transferred initially to peat pellets for hardening for one week and then to the greenhouse for further growth and development.
In conclusion, we have successfully established an improved regeneration system in two cultivars of big bluestem, Kaw and Earl, which are grown in the southern US. Both the cultivars showed enhanced embryogenic calli formation (39.1% in Kaw and 39.8% in Earl) on MS medium containing 2,4-D and L-proline. In addition, shoots were successfully regenerated (100% in Kaw and Earl) on MS medium containing kinetin (5.0 mg l-1). Because of high-frequency embryogenic calli formation and efficient plant regeneration, this protocol may be used for the application of genetic engineering technologies in big bluestem cultivars, Kaw and Earl.

The author, Muthusamy Manoharan thank Dr. Lynn Dahleen, L&Js Homegrown Exchange LLC, Albany, Wisconsin, for critical review of the manuscript and the Plant Powered Production (P3) Center, which was funded wholly or in part by the National Science Foundation (NSF) EPSCoR Program and the Arkansas Science and Technology Authority (ASTA) for providing funding support for this study. The NSF EPSCoR award number is: EPS-1003970.