The aim of the study was to monitor the health and nutritional status of Kuwaiti’s Aradi and exotic Damascus and Barbari goat breeds raised under an intensive system of production through the determination of biochemical parameters and hematology profiles. The study was conducted during the summer season and blood samples were collected from lactating does and Damascus bucks. According to the findings of the present study, concentrations for glucose ranged from 60.75 to 71.76 mg/dl, for blood urea nitrogen (BUN) between 25 and 60 mg/dl, for creatinine between 1.2 and 1.9 mg/dl, for albumin between 3.7 g/dl and 4.05 g/dl, and total protein between 6.0 and 6.98 g/dl and in general were within the normal ranges for goats. The hematology profiles of Damascus bucks showed normal range for the most contents of white blood cells, apart from monocytes (M) %. At the same time, number of red blood cells was within the normal range (11.20-11.90 × 106/µL). However, hematocrit (HCT) % was lower (12.1-14.0) and mean corpuscular volume (MCV) content was higher (11.30 fL) compared to values reported for healthy goats in previous studies. The hematology profiles of lactating does of all breeds were within the normal range for white blood cells (8.05-12.88 × 103/µL) and red blood cell (10.44-12.65 × 106/µL). Low hemoglobin levels and a significantly (P<0.05) lower mean platelet volume (MPV), procalcitonin (PCT) and platelet distribution width (PDW) were found in Damascus does compared to the other examined breeds. The data of the present study could serve as reference values, since this is the first time that biochemical and hematological parameters were determined in Aardi, Damascus and Barbari goats managed under an intensive production system in Kuwait. These data can be used in the realistic evaluation and improving the management practices, nutrition, and monitoring health status and diagnosis of diseases.

Biochemical and hematological variables of blood are generally used to monitor and evaluate health, nutritional and physiological status of ruminants (Chapple et al., 1991; Al-Eissa et al., 2012; Gupta et al., 2007). The evaluation of blood constituents has been widely used as a marker to determine the efficacy of feed nutrient content and supplements (Belewu and Ogunsola, 2010; Belewu et al., 2009; Akingbade et al., 2002) but also an index of transportation stress (Ambore et al., 2009). The biochemical and hematology profiles can also be used to assess the immunity status in goats (Al-Seaf and Al-Harbi, 2012). These profiles could be altered during pregnancy (Waziri et al., 2010) and seasonal variations had also an effect on these profiles (Abdelatif et al., 2009). Finally, nutrition, stress, reproductive status, age, sex, genetics, management, housing, and other environ-mental factors (temperature, relative humidity etc.) are known to have a profound effect on the hematological and biochemical profiles of small ruminants (Balikci et al., 2007; Olayemi et al., 2009).

According to the existing literature, there is a great variation among goat breeds concerning their hemato-logical and biochemical profile (Azab and Abde-Maksoud, 1999; Tambuwal et al., 2002; Tibbo et al., 2004). Therefore, there is a need for establishing a reference value data for the physiological variables of goat breeds raised under a feedlot management system (zero grazing) with the intension of further evaluation of their nutrition, management and health. The objective of the present experiment was therefore to investigate the biochemical and hematological parameters of the lactating does of local Aardi, exotic Damascus, and Barbari breeds and the hematology profile of Damascus bucks managed under an intensive system in Kuwait.

The study was conducted at the Kuwait Institute for Scientific Research, in the Agricultural Research Station in Sulaibiyia, about 40 km southwest of the Kuwait City during summer. The climate conditions were typical of the Arabian desert, temperature was high (up to 52°C) and extreme variation existed between day and night. Relative humidity was 12 to 20% in mid-summer (June to August). All goats were housed in partially enclosed sheds.

A total of 16 lactating Does from Syrian Damascus, Indian origin Barbari and two strains of Local Aardi does and four bucks from Syrian Damascus were obtained from local goat breeders in Kuwaiti. The does were 22 to 24 months old, the mean live weight were 52.00 ±2.83, 43.33 ±5.5, 56.08 ±5.58 and 32.79 ±2.97 kg for White Aardi, Black Aardi, Damascus and Barbari does respectively. The does were in their first parity and in second third of their lactation period. The bucks were around three years old and their live weight was 61.5 ±1.44 kg. After purchasing the goats, they maintained in quarantine and were adapted to an intensive production system and through the provision of feedlot diets containing 60% concentrates and 40% roughages (alfalfa straw) with 12% of crude protein and medium level of energy (2.8 Mcal/kg) (Table 1). Health status of the animals was checked, and they were then weighed and vaccinated for endemic diseases. Each group of the same goat breed was housed in separate pen providing free access to water and diets that were formed feeds according to the NRC standards (NRC, 1981). 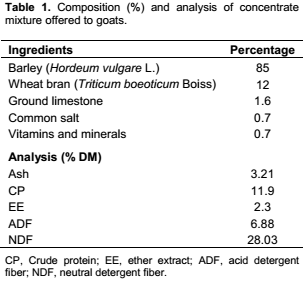 Blood samples were collected once during month of July between 6:00 and 7:00 am. Blood samples were collected with 18-ga needle by jugular venipuncture. The blood was collected into two tubes, one in a plain tube for serum analysis and another with heparin for whole blood analysis. Blood samples were centrifuged within two hours of collection and serum was harvested and stored at -20°C for biochemical analysis. Two methods of serum total protein analysis were used for comparative purposes; Biuret and Refractometry. The blood serums were analyzed for glucose, creatinine, albumin, chloride, urea and hemoglobin by a spectro-photometer (Perkin Elmer Lambda 25).

All results are expressed as means ± standard deviation (SD). The effects of breed on biochemical parameters and hematology profiles of does were analyzed by one-way analysis of variance (ANOVA). If ANOVA showed an acceptable level of significance (P<0.05), Duncan Multiple Range Test was applied for post hoc comparison by using the General Linear Model (GLM), procedures of the SPSS Statistical Package (SPSS, 1999).

The mean concentration value of glucose for Damascus, Black Aardi, and Barbari does were 71.74, 71.76 and 60.75 mg/dl, respectively (Table 2). These values were within the normal range for goats (50-75 mg/dl). However, White Aardi goat showed significantly (p<0.01) higher glucose levels than the other breeds. The concentration of glucose in the blood serum is regulated by the nutritional regime and hormones; however, it could be influenced by many other factors, such as age, sex, breed, and environment (Sakha et al., 2009). The high glucose levels could be a result of stressful situation, or the administration of some drugs like steroids (Amer et al., 1989).

The levels of BUN for the examined does were within the normal range (Table 2) for goats (25-60 mg/dl). Studies reported varied values of BUN in different goat breeds. Benjamin (1989) suggested an average BUN concentration of 21.4 mg/dl; while Behera et al. (1993) found that BUN concentration ranged between 34.6 and 57.4 mg/dl in Black Bengal goats. Many reports suggested that BUN concentration was lower in kids than in adults with no significant differences between the sexes (Castro et al., 1977). Turner et al. (2005) reported a breed by diet interactions effect on BUN values in a study where three goat breeds, that is, Boer, Nubian, and meat Spanish goat were offered lespedezq (Lespedeza cuneate) or alfalfa hay (Medicago sativa L). In general, lower concentration of BUN is an indication of low dietary protein level or hepatic chronic disease. On the other hand, the increase of BUN could be the result of renal failure and body dehydration (Mishra et al., 2013).

In study, the creatinine levels of Black Aardi, Damascus and Barbari were within the normal range for the goats (1.2-1.9 mg/dl). However, White Aardi showed significantly higher (p≤0.01) value (1.57 mg/dl) compared to Black Aardi. Belewu and Ogunsola (2010) reported different low creatinine concentrations as a result of the diet fed to goats, 0.7 mg/dl for un-treated kernel cake (Jatropha curcas) and 1.2 mg/dl for goats fed with fungi-treated Kernel cake. The level of creatinine in the blood serum could be altered due to differences in energy and protein content of feeds. Solaiman et al. (2009) showed that creatinine levels in male kids increased linearly when cotton seed (Gosspium hirsutum) ration was offered to them. Moreover, a study on goat grazed on rangeland showed that the level of creatinine had varied values depended on certain roughages available in wet and dry periods of grazing (Mellado et al., 2006). The level of creatinine could also be elevated in the serum of goats after water deprivation (Abdelatif et al., 2010).

The albumin content ranged between 3.7 to 4.05 g/dl in the four breeds of doe (Table 2). These values were within the normal range of albumin for goat serum of (2.7-3.8 g/dl) except the White Aardi which had insignificantly high value (4.05 ±0.21 g/dl). Seasonal variation had been reported for albumin in blood serum of Nubian goats (Abdelatif et al., 2009). Zubcic (2001) also reported albumin level of 3.3 g/dl in grazing German fawn goats.

The total protein for the four breeds of goats was between 6.0 and 6.98 g/dl (Table 2). These values were within the normal range value of 6.0 to 7.0 g/dl. High serum protein levels may result from high intake of grains, dehydration, and high temperature (Sandabe and Chaudhary, 2000). Zubcic (2001) reported that total protein value in goat serum could be increased till 7.5 g/dl in extensively raised animals. Sakha et al. (2009) also reported a normal value of 7.0 g/dl; however, they also found significant differences between sexes. Deangelino et al. (1990) also showed that the total protein concentration in young goats was significantly lower than that of adult.

The white blood cells count was within the normal range reported for goats (Table 3). WBC of Damascus does was apparently lower than the other breeds, however this difference was not significant. M and B counts of Damascus does were slightly higher than that of the normal range. Low levels of MCV was found for all goat breeds in the study; whereas MCHC levels were higher (P>0.05) than the reference values. The reason for these discrepancies in MCV and MCHV values is not clear. MCH concentrations for Black Aardi and Damascus were within normal range, whereas, White Aardi and Barbari had insignificantly higher than normal range. No significant difference was observed for RDW (31.35-35.25%). Significantly lower MPV, PCT and PDW values were found in Damascus does compared to three other breeds (P<0.05). Erythrocyte values were observed different in present study than those previously reported (Piccione et al., 2010; Olayemi et al., 2009; Rice and Hall, 2007). Age and sex have been reported to influence the hematological values of goat in the arid zone Egbe-Nwiyi et al. (2000); Zumbo et al. (2011) and Zamfirescu et al. (2009). Disease could also influence the hema-tological parameters in goats (Sulaiman et al., 2010). 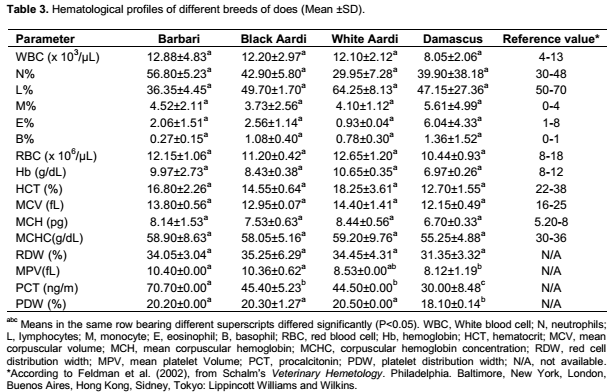 Table 4 shows the means (±SD) of the hematological parameters for of the Damascus bucks. Values were within the normal range for goat apart from M% that was higher than the reference values (0-4%). The high level could be attributed to an inflammation, since only one animal showed a very high value (19.5%) resulting in an overall high mean of M%. The mean RBC value was 11.55 which were within the normal range. The HCT% and MCV content were lower than the normal range, which could indicate anemia, caused by vitamin B12 or folate deficiency. 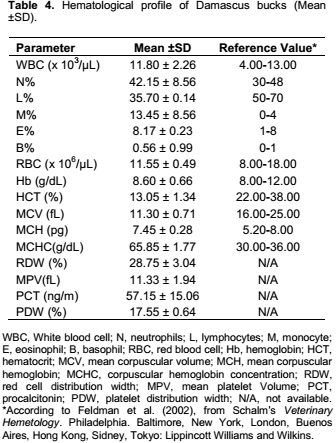 The data obtained in the present study are the first reference value’s obtained from Aardi, Damascus and Barbari goats raised under Kuwait’s intensive production system. It may be concluded that the biochemical and hematological parameters were mostly within the physiological range for goats as reported from previous studies. These data can contribute to our knowledge for monitoring health status, diagnosis of diseases and management in these four breeds in Kuwait.

The project team members express their appreciations to the Kuwait Foundation for the Advancement of Sciences (KFAS) for the partial funding of the project.