Yam (Dioscorea species) and banana (Musa species) leaf sample contain high levels of polysaccharide and polyphenolic compounds. Extraction of good quality DNA from such leaves is usually problematic. Therefore, there is a need to extract good quality DNA in order to perform downstream DNA analysis, especially for the detection of viruses due to their low titration in some infected leaves. The cetyltrimethylammonium bromide (CTAB) DNA extraction method was selected in order to optimise DNA extraction from plant material with high level of polysaccharides. Four steps of the Lodhi et al. (1994) method were modified to be user friendly in less resource laboratories of developing countries. Yield and purity of the extracted DNAs were quantified using a NanoDrop 2000 spectrophotometer and by migration on an agarose gel after polymerase chain reaction (PCR) amplification. The results of the DNA yields and purity were in the range of 287.40±2.23 to 424.95±1.85 ng/ul and 2.10±0.05 to 2.19±0.04, respectively. Modification was found to yield DNA of reasonable quantity, quality and purity. Furthermore, the method can be used in a laboratory with less sophisticated waste disposal system.

Yam (Dioscorea species) leaf sample contain high levels of polysaccharide and polyphenolic compounds. The presences of these compounds in yam leaf tissue often affect the isolation of good  quality  DNA  (Kenyon  et  al., 2008). This has presented a problem for the downstream molecular analyses of extracted DNAs from yam samples especially in the detection and analysis of yam viruses such  as   badnaviruses.   Moreso,  the  low  virus  titre  in infected yams does not allow the expression of a well-defined symptoms on yams leaves (Seal and Muller, 2007; Seal et al., 2014). Therefore, the need for extracting reasonably pure DNA of both good quality and quantity for the downstream successful DNA-based diagnostic techniques is required. Hence, the aim of this study was to optimise a DNA extraction methodology for plants with high levels of polysaccharide and polyphenolic compounds. Cetyltrimethylammonium bromide (CTAB) DNA extraction method was selected as the method to optimise, as it is generally the method of choice for plant material with high polysaccharides and other inhibitory substances; it has been used successfully for yam in the past (Lebas, 2002; Kenyon et al., 2008) and for other recalcitrant plant species (Csaikl et al., 1998; Michiels et al., 2002; Sharma et al., 2008; Tiwari et al., 2012). Extracted DNA that is pure give good polymerase chain reaction (PCR) products compared to DNA with lower purity which requires several dilutions before it will give a good PCR product. In this study, polymerase chain reaction (PCR) methods were used to evaluate DNA purity by detecting the presence of yam badnavirus sequences on samples known to be badnavirus positive. PCR techniques provide greater sensitivity compared to other methods such as symptom observation and serological methods (Kenyon et al., 2008; Seal et al., 2014).

Optimisation of DNA extraction protocols
The results obtained with different modification steps are described as the following.
Separation of DNA from polyphenols
The NS step was incorporated into the Lodhi et al. (1994) method to reduce the oxidation of phenolic plant metabolites during DNA extraction. The separation of DNA from phenolic compounds was historically reported as difficult (Ghaffari et al., 2011); however, the inclusion of antioxidants in the extraction buffer assists in overcoming downstream problems associated with the presence of oxidised phenolic compounds in DNA extracts. Results of DNA concentration and purity obtained from the inclusion of NS and BM step in Lodhi et al. (1994) were recorded and their mean values were compared (Figure 1A and B). Although there was a difference between the mean values obtained from both NS and BM inclusions (Figure 1A and B), statistically the t-test demonstrated that there was no significant difference (P>0.05) between the Lodhi et al. (1994) and modified methods including the NS and BM modification steps. Nevertheless, the utilisation of NS method is considered favourable compared to β-mercaptoethanol because of its toxicity and problems associated the waste disposal of β-mercaptoethanol especially in a less equip laboratory set up. 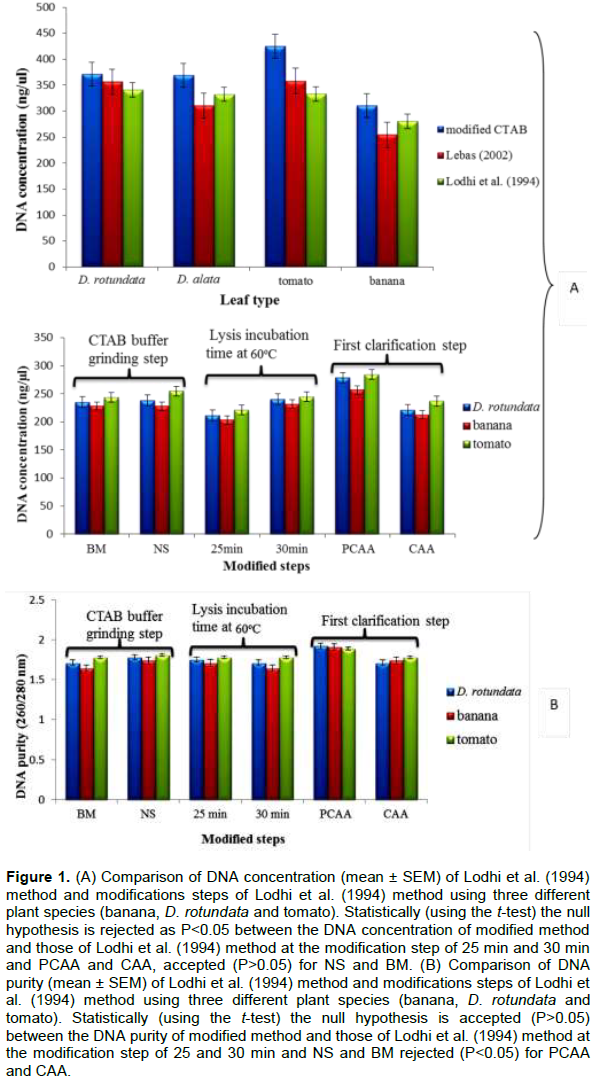 Release of genetic materials from the cell
To release nuclear material (DNA/RNA) into an extraction buffer is achieved through detergents (CTAB) to lyse cell walls and membranes. In this study, different incubation times (25 to 40 min) at 60°C were evaluated, and the optimum incubation time that yielded the greatest DNA yield was at 60°C for 30 min. The mean values of DNA concentration and purity obtained from the inclusion of NS and BM step and homogenate incubation time for 30 min and 25 min in Lodhi et al. (1994) were recorded and compared (Figure 1A to B). There was a significant difference (P<0.05) between the DNA concentrations achieved using the modified method and those by the Lodhi et al. (1994) method. In contrast, there was no significant difference (P>0.05) between the DNA purity of the modified method compared to the Lodhi et al. (1994) method. It was observed that incubation for 40 min and above and incubation below 25 min generated lower quantities of DNA and purity (data not shown).
Separation of DNA from proteins
Incubated homogenates were deproteinized using an organic solvent, which reduces the formation of insoluble protein-nucleic acid complex thereby separating the DNA in the aqueous phase and proteins in the organic phase. It is also important to make sure the pH of the organic solvent is >7.8 as a decrease  in  pH  (that  is, more acidic conditions) results in the absence of DNA in the aqueous phase. In this study, CAA was replaced by PCAA as the first clarification in the deproteinization step of the modified method. The results have indicated an increase in the mean values of both DNA purity and quantity as shown in Figure 1A and B. Statistically by the t-test, the null hypothesis is therefore rejected as there is a significant difference (P<0.05) between the DNA concentration/ purity of the modified method and those of Lodhi et al. (1994) method at this modification step. The increase in the mean values of DNA purity for the modified method compared with Lodhi et al. (1994) after PCAA step indicates that PCAA is better at removing proteins from DNA than CAA alone.
Separation of DNA from polysaccharides
Contamination of DNA with polysaccharides is problematic and difficult to eliminate. In this study, extracted DNAs were precipitated through different incubation lengths (20 to 90 min) at -20°C in cold isopropanol together with 5 M NaCl (data not shown). The optimum incubation time for the DNA precipitation was recorded at 1 h producing mean value ratios of A260/A230 nm above 1.6.
Comparison of the modified CTAB to other DNA extraction methods
The effectiveness of the modified CTAB method (including all favourable modification steps) was compared to Lodhi et al. (1994) using leaf tissues from three different species (banana, D. rotundata and tomato) stored at three different conditions (fresh, 4°C/24 h and RT/24 h). From the results, DNAs of high quantities were obtained from fresh leaf samples compared to etiolated leaves, and from the modified method compared to the Lodhi et al. (1994) method (Figure 2A). A significant difference (P<0.05) was observed between the DNA concentrations of fresh and etiolated leaf samples of D. rotundata and banana (and not for tomato; where P>0.05) using both modified method and Lodhi et al. (1994) method (Figure 2B). 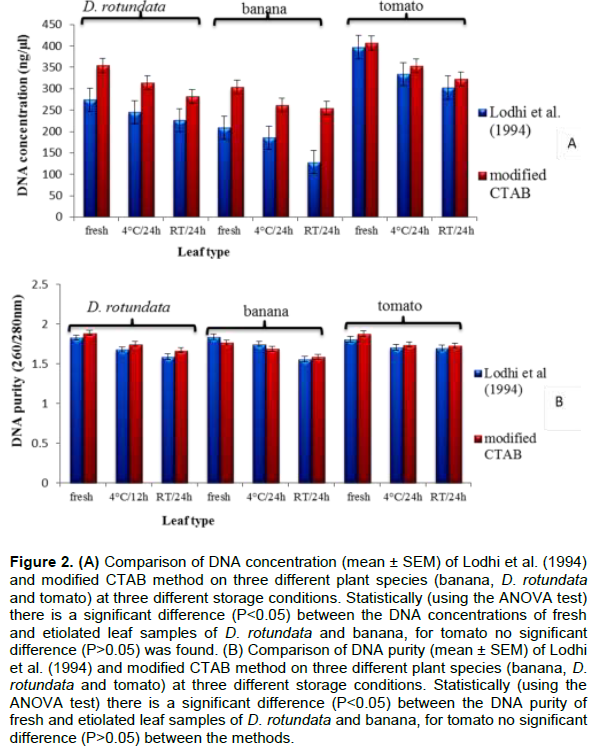 Furthermore, the mean values of DNA concentration and purity for the extracted DNAs from four leaf tissues (banana, D. alata, D. rotundata and tomato) using the modified method were compared with those of the Lodhi et al. (1994) and Lebas (2002) methods as shown in Table 1 and Figure 3A and B. The DNA concentrations obtained from these methods were analysed. Statistically, there was a significant difference (P<0.05) between the results obtained with the three different methods for yam D. rotundata (P = 0.0021), D. alata (P = 0.0035) and banana (P = 0.0127) there was no significant difference (P>0.05) for tomato leaves (P = 0.0701). The mean value ratios obtained for A260/A230 nm were above 1.6 indicating low levels of polysaccharide contamination in the extracted DNA, and the A260/A280 nm ratio were above 1.8 (Table 1) representing low amounts of protein contamination in the extracted DNA. 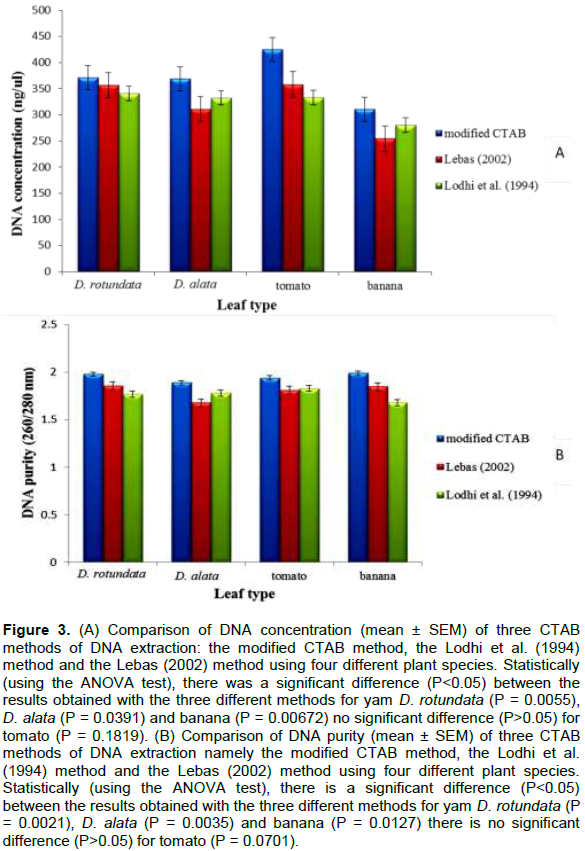 PCR detection of badnaviruses
The quality of the extracted DNAs were also determined by running undigested and digested total DNA extracts. A perfect migration pattern was observed without any signs of degradation (Figure 4A). PCR of known badnavirus-positive D. rotundata leaf samples (fresh, etiolated and dried) were tested for badnavirus in the following dilutions: undiluted, 1:100 dilution and 1:1000 dilution as shown in Figure 4B. The results show that dilution of the DNA sample does affect the outcome of PCR reaction. Diluted DNAs gave intensive PCR bands compared to undiluted DNAs (Figure 4B). Furthermore, ~65%   badnavirus   PCR   success   was   recorded   in    undiluted compared to the 100% success in diluted samples, indicating that dilution is vital to generate meaningful PCR results, presumably as it dilutes the concentration of PCR inhibitory substances (Figure 5). 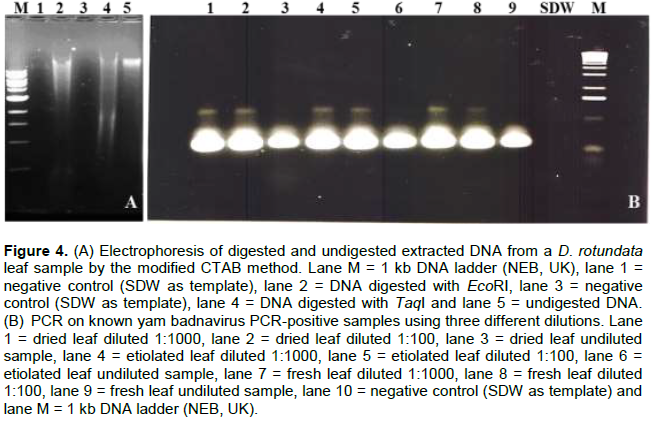 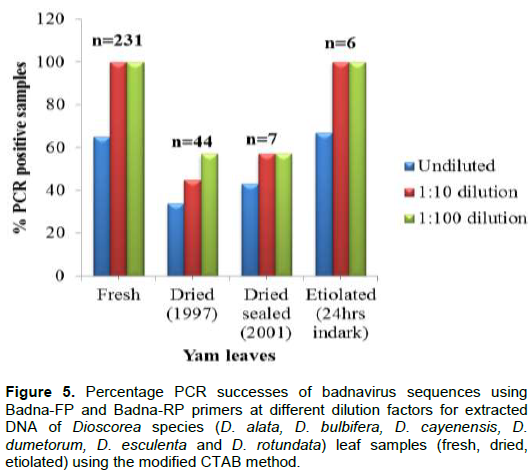 After the method modification, a total of 231 DNAs were extracted from yam leaf samples obtained from IITA, and the DNAs were screened for the presence of badnavirus sequences by the PCR method using degenerate primers designed by Yang et al. (2003). The samples containing a band of the expected size (~579 bp) after agarose electrophoresis were scored as positive. The percentage PCR successes were evaluated (Figure 5) and this justified the effectiveness of the modified method in extracting sufficiently pure DNA. The method was also found to be suitable for extracting total DNA from dried, fresh or etiolated yam leaf tissue (Figure 5).
Purification of CTAB extracted DNA for max preps
Despite the optimized  CTAB  method  able  to  extract  high  quality  DNA from 100 mg leaf tissue, however, this modified method failed to yield DNA of sufficient quality on the ‘maxi’-preps (~3 g of leaf tissue) needed for further analysis such as Southern blot hybridisation. Therefore, further optimisation of the CTAB method had to be carried out. Yields from two additional steps were compared to the modified CTAB method. The two additional steps tried were the inclusion of a polysaccharide pre-treatment step using HEPES, and a Qiagen Tip100/G column purification of the DNA generated with the modified CTAB method. Figure 6 shows that Qiagen Tip100/G column purification of extracted DNA (QC1-QC4) yielded DNA of better quality compared to the modified CTAB method (CT1-CT4) developed and the modified CTAB method on HEPES treated ground leaf (HP1-HP4). From the result in Figure 6, it can be seen that the low molecular weight DNA/RNAs were successfully removed from the DNAs of D. rotundata samples (lane QC1-2) using Qiagen Tip100/G column purification. In contrast, the low molecular weight DNA/RNA was not completely removed from D. alata sample (lane QC3-4). This could be due to large quantities of mucilaginous substances that were observed to drop through the columns for D. alata compared to D. rotundata samples during purification. This led to a slow drop of the buffers through the columns in D. alata samples until a gentle force was applied to enable the flow of the solutions as suggested by the manufacturers of the columns (Qiagen, UK). This additional force might have led to unwanted products passing through. 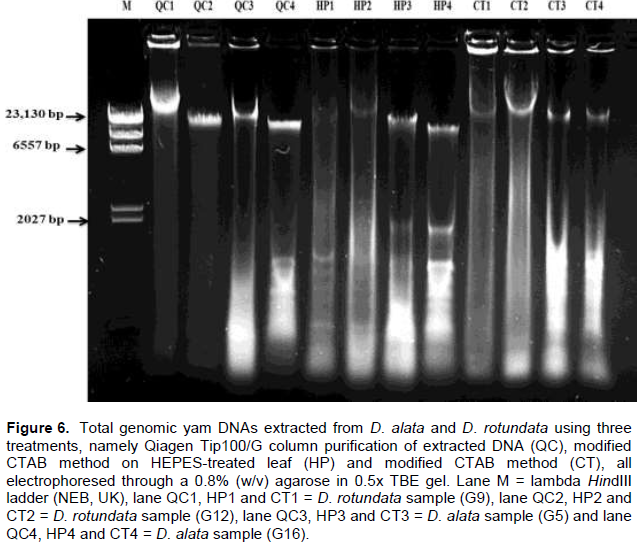 The authors would like to thank Professor Susan E. Seal, professor in Molecular Biology at the Department of Agriculture, Health and Environment Natural Resources Institute University of Greenwich UK for her guidance.