Food additives and their health effects: A review on preservative sodium benzoate

Food additives are widely used by the food industry to increase the product shelf life and/or attribute as well as enhance certain characteristics of particular foods, which are often lost during processing. With the advent of modern life, more and more additives have been employed by the food industry. Despite their wide use, they are substances that may cause adverse reactions like any other drug. This study aimed to contextualize through a review of the literature, the scientific evidence on the risks entailed by the consumption of food additives, special regards to sodium benzoate. This additive is a sodium salt, which is commonly used as a chemical preservative in foods, and it is found mainly in industrialized drinks/beverages. Sodium benzoate is considered safe by major regulatory agencies, but there is still controversy over its effects on human health.

The change in dietary habits in recent decades has caught the attention of regulators and the scientific community as a whole, since the substitution of in natura by industrialized foods has contributed significantly to lowering the quality of people’s diet, a situation observed due to the indiscriminate use of chemical additives in processed foods (Polônio and Peres, 2009). Just as the dietary pattern of the population has been changing in order to meet the demands of a modern and globalized world, where time is very precious, the Western people’s diet has also been following this same model (Hill, 1993). In this sense, the preferred and consumed foods are those of easy and/or instant preparation, with distinguishing flavor, high energy density and usually at a low cost (Loco et al., 2015). The use of food additives has increased greatly in recent years and as a result, it is estimated that 75% of the contemporary diet is made up of industrialized foods. Estimates has shown that each person may consume 3.6 to 4.5 kg of food additives per year on average, but these values may be even greater (Zengin et al., 2011). Additives are usually used in all types of food, propagated from the minimally processed sorts to the highly-processed and modified ones (Carocho et al.,2015). The interaction between some food additives and the general public has not been very peaceful. In the 1980s, food additives were considered to be hazardous for consumption, which fueled widespread fears and the exclusion of some additives.
Since then, the relationship between additives and consumers has improved, although some mistrust still remains (Emerton and Choi, 2008). Despite their wide use, these are substances capable of triggering adverse reactions, just as any other drug does, including allergic reactions, behavioral changes and carcinogenicity (Cardoso et al., 2017a; Aun et al., 2011). Sodium benzoate (BS) is a sodium salt used to inhibit the growth of molds, yeasts and bacteria, found in a variety of products such as preserves, sauces, beverages and juices (Turkoglu, 2007). The Food and Drug Administration (FDA) considers the preservative sodium benzoate to be safe (FDA, 2017). However, Boris and Mendel (1994) report that the excessive intake of sodium benzoate induced hyperactivity in children, caused urticaria (Michaelsson and Juhlin, 1973), and in addition it has also been significantly harmful to the Deoxyribonucleic Acid (DNA) (Zhang and Ma, 2013). Taking into account the effects observed by the authors, the study aimed to carry out a review of the literature to contextualize the consequences caused by the chronic and high consumption of the preservative sodium benzoate.

According to Codex Alimentarius (2017), food additive means “any substance not normally consumed as a food by itself and not normally used as a typical ingredient of the food, whether it has nutritive value or not the intentional addition to food for a technological (including organoleptic) purpose in the manufacture, processing, preparation, treatment, packing, packaging, transport or holding of such food results, reasonably expected to result (directly or indirectly) in it or its by-products becoming a component or otherwise affecting the characteristics of such foods. The term does not include contaminants, or substances added to food for maintaining or improving nutritional qualities. As these chemicals are intentionally added to food, it is essential to know their properties, so as to ensure their adequate and safe use (Cardoso et al., 2017b; (Zhang and Ma, 2013). The assessment of food additives worldwide is supported by the control system of the Acceptable Daily Intake (ADI), developed by the Joint Food and Agriculture Organization (FAO) of the United Nations and World Health Organization (WHO) Expert Committee on Food Additives (JECFA, 2017). The importance of technological additives in food production is evident (Toledo and Tfouni, 2002).
However, it is necessary to be aware of the possible toxicological risks that can be caused by frequent and/or large quantities of these substances (Turkoglu, 2007). IDA has been developed to protect the consumer against possible adverse health effects (Loco et al., 2015). It is defined as a numerical value of the additive, measured in relation to the body weight that a person can ingest daily throughout life with no significant health risk (Varela and Fiszman, 2013; WHO, 2017). The maximum use dose is defined as the consumption of an additive in its highest concentration that Codex Alimentarius Commission (2017) has determined to be functionally effective in a food or food category, and it must be considered innocuous in relation to its consumption by humans. In order to determine the possible harmful effects of a food additive or its derivatives, these additives must be subjected to trials to an appropriate toxicity assessment (Honorato et al., 2013). All food additives should remain under observation and evaluation whenever appropriate, considering the conditions of use and any new scientific data (Abu-Taweel, 2016).

Food preservatives are substances that can prevent or delay changes caused by the action of microorganisms, enzymes and/or physical agents (Tfouni and Toledo, 2002) once they are added to a given food. Its high utilization by the food industry is due to the growing demand for chemically stable, safe and durable foods (Thomas and Adegoke, 2015). Food preservation is one of the oldest varieties of technology used by humans; different forms and means of preservation were found and perfected for this purpose (Mpountoukas et al., 2008). Preservatives may be natural (salt and sugar) or chemical, and this is the most effective type in preservation for longer periods (Martyn et al., 2013; Pongsavee, 2015). The most commonly used preservatives are: sulfur dioxide, sodium benzoate, sorbic acid, propionic acid, nitrites and sodium and potassium nitrates (Lennerz et al., 2015). Similarly, to other classes of food additives, preservatives must meet criteria for their use, since they are chemicals and may cause adverse health effects (Akintonwa et al., 2007). Recent toxicological studies indicate that certain concentrations of synthetic preservatives and their continuous use may be potentially mutagenic and/or genotoxic (Di Sotto et al., 2014; Antunes et al., 2016; Mellado-Garcia et al., 2017). Research is being conducted to find natural compounds with antimicrobial and antioxidant activity, which may be new alternatives to replace the commonly used synthetic preservatives or to make associations between them, thus reducing their amount in foods and their possible health risks (Ramalho and Jorge, 2006).

Sodium benzoate is a sodium salt represented by the chemical formula C7H5O2Na, with a molecular weight of 144.1 g.mol-1, odorless compound and soluble in water and ethanol. It is typically used as a preservative in some products from the cosmetic, pharmaceutical and food industries (Lennerz et al., 2015). In the pharmaceutical industry, it is used in the treatment of various diseases such as disorders of the urea cycle, liver diseases and multiple sclerosis (Yavav et al., 2016). In the food industry, sodium benzoate is used in foods and beverages, as it is effective to inhibit the growth of fungi and bacteria during storage, besides providing easy application (Tsay et al., 2007). It is indicated for the preservation of margarines, sauces, marmalades, gelatin, liqueurs, beers, fruit juices and soft drinks (Zhang and Ma, 2013). Despite its presence in several foods, population studies indicate that soda and juice in cartons are the main dietary sources of this preservative (Pongsavee, 2015). Sodium benzoate has been used for many years as a preservative because of its good stability and excellent solubility in water (Ren et al., 2014). It is considered "Generally Regarded as Safe" by the FDA and may be present in foods in concentrations above 0.1% (Lennerz et al., 2015). For the FAO and WHO, the IDA for foods with sodium benzoate is 5 mg.kg-1 body weight (Zhang and Ma, 2013; Lennerz et al., 2015).
According to RDC n° 65, dated November 29, 2011 (ANVISA), the maximum limit of sodium benzoate as preservative is 0.05 g/100 mg or 0.05 g/100 mL (Zhang and Ma, 2013). According to the European Food Safety Authority (ESFA), the Lethal Dose (LD50) for the preservative is 2000 mg.kg-1 (EFSA, 2017). There are reports that oral doses of 8 to 10 g can cause nausea and vomiting, and also that small doses have little or no effect (Nair, 2001). The FDA has never set a limit for sodium benzoate and recognizes it as very safe, though it has been criticized as being negligent in its assessments in the light of publications that demonstrate contradictions (FDA, 2017). While IDA is almost unlikely to be exceeded for average consumers, large daily consumers of soft drinks and juices may exceed the ADI (Tfouni and Toledo, 2002). As soon as it is consumed, sodium benzoate (a benzyl alcohol metabolite) is rapidly absorbed by the gastrointestinal tract, then conjugated with glycine to form pyruvate in the liver (Pongsavee, 2015), this transformation occurs by means of two steps in the mitochondria (Bridges et al., 1970). Upon entering the cell, the preservative is converted to benzoyl-CoA by means of an Adenosine Triphosphate (ATP)-dependent acid, reaction 1.
Subsequently, CoA is converted to pyruvate, reaction 2, by means of glycine N-acyltransferase. In the mitochondria, SB results in the consumption of ATP, glycine and coenzyme A. The ingestion of this preservative causes an increase in the serum of benzoate and also of pyruvate (Akintonwa et al., 2007). The resulting hippuric acid is rapidly excreted in the urine within the first 6 h, and the remaining dose is completely eliminated within 2 to 3 days (Pongsave, 2015; Bridges et al., 1970). There are several references for the same preservative, which makes its evaluation complex. In addition to that, it has been proved that certain preservatives, especially antimicrobial agents, may cause allergies, urticaria (Gören et al., 2015), and behavioral disorder such as hyperactivity and Attention-deficit/hyperactivity disorder (ADHD) (Beezhold et al., 2014; McCann et al., 2007), as well as being toxic and genotoxic when consumed above the ADI (Yavav et al., 2016). Table 1 lists some pieces of research and the results found on the consumption of the preservative. 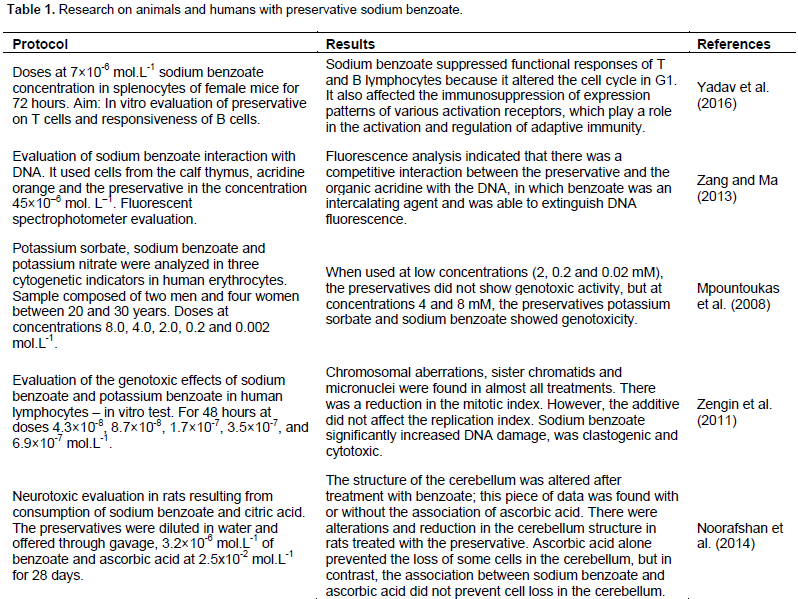 The adverse effects caused by the consumption of food additives are well elucidated in the literature, but there is still controversy concerning results for the preservative sodium benzoate. By means of research, the present review describes the main adverse effects caused by the consumption of sodium benzoate in humans and animals, and it demonstrates that toxicity may be different, depending on the species, the dose and exposure to the preservative. Consumption above ADI (5 mg kg-1) resulted in hyperactivity, ADHD and allergic reactions. Sodium benzoate was considered genotoxic, clastogenic, neurotoxic, besides being responsible for changes in cell cycle and for having proven intercalation in the DNA structure. All the results presented were performed for a limited time, that is, cannot be considered as long-term interventions. Considering the evidence found for the consumption of the preservative, it is recommended that further studies can be conducted on the substance in order to better understand its genotoxic, immunological and behavioral effects. In addition, it is worth mentioning that drinks containing sodium benzoate are mainly those with artificial fruit flavor, carbonated drinks, teas, soft drinks and coffees, as well as drinks with lots of syrup and sugar; which already sends several warnings and precautions as to the ingestion of this substance. What is clear in this review is the need for caution and attention as to the consumption of industrialized beverages, because besides preservatives, there are other substances that can also be harmful to human health when consumed regularly.