An efficient micropropagation protocol was developed for the medicinal plant Launaea cornuta using green house axillary buds as explants. The best sterility was obtained at 30% (v/v) local bleach (JIK). Maximum shoot induction rate was achieved when axillary buds were cultured on Murashige and Skoog (MS) Media supplemented with 0.5 mg/L of 6-benzylaminopurine (BAP) for 3 weeks. The highest number of shoot multiplication was obtained when induced shoots were culture on MS media supplemented with 0.5 mg/L BAP and 0.2 mg/L NAA for 30 days. The best rooting response with regard to average root length, rooting percentage and number of roots was achieved within 4 weeks of culture of excised shoots on MS media having 0.5 mg/L BAP. Regenerated plants were successfully acclimatized and about 80 to 90% of plantlets survived under ex vitro conditions. About 170 plants were produced from a single nodal bud of L. cornuta after 60 days. A reproducible protocol was established for in vitro propagation of L. cornuta, an important indigenous vegetable with high medicinal value.

Launaea cornuta commonly known as bitter lettuce or “mchunga” is a wild vegetable belonging in the family Asteraceae. It is indigenous to Kenya, Uganda, Malawi, Tanzania, Mozambique and Zimbabwe where it is mainly used as a vegetable (Jeffrey, 1966; Schippers, 2002), fodder for rabbits and sheep and to increase milk yield in cows (Burkill, 1985).  It is rich in nutrients such as proteins, fat, carbohydrates, calcium, phosphorus, iron and ascorbic acid (Ndossi and Sreeramulu, 1991). It is exploited for its antidiabetic, anticancer, insecticidal (Kareru et al., 2007), antimalarial, antibacterial (Musila  et al., 2013) and anthelmintic (Hiene and Heine, 1988) properties. It has been used to treat gonorrhea, syphilis, sore throats, coughs, typhus, nasal-pharyngeal infections, measles, swollen testicles, pain in the spleen, ear aches, hookworm eradication as well as fever (Hiene and Heine, 1988). L. cornuta is locally propagated vegetatively through rhizomes (Abukutsa, 2007). Development of a micropropagation protocol for L. cornuta can help to promote its cultivation and domestication which is currently limited to the coast of Kenya and countries bordered by the coast line (Abukutsa,  2007).  The  aim of this study was to regenerate L. cornuta in vitro using nodal buds as explants. A micropropagation protocol is essential for rapid multiplication, utilization and conservation of L. cornuta.

Establishment of plants in the green house and culture conditions
Launaea cornuta plants were collected from the field and planted in sterile soil in plastic bags and placed in the screen house at Kabete Biotechnology Center of Kenya Agricultural and Livestock Research Organization (KALRO). The plants were watered whenever necessary. All experiments were conducted using MS basal media (Murashige and Skoog, 1962) supplemented with 20 g/L sucrose and 3 g/L phytagel. The media was sterilised by autoclaving at 121°C for 20 min and dispensed equally into 10 ml universal bottles. Explants were cultured at a temperature of 24 ± 2°C and a photoperiod of 16/8 h light and dark conditions. Lighting conditions were provided by cool-white fluorescent lights of 3000 Lux.
Explant surface sterilization
Shoots from green house grown plants were cut just above the soil surface using clean scalpels and placed in bags (Figure 1). Shoots were defoliated in the tissue culture laboratory and individual 3 cm long  shoot  buds  (explants)  excised.  Twenty  one  explants  were
placed into 5 different jam jars and rinsed 3 times with distilled water containing 3 drops of tween-20. This was followed by rinsing to remove the soap and addition of local bleach (JIK with 3.85% NaOCl) at 0, 5, 10, 20, and 30% into the jars for 20 min. The bleach was discarded and 70% ethanol added for 2 min. They were thoroughly rinsed with distilled water and held in 2% bleach solution awaiting culture. The dead tissues at the edges of the explant were cut off and the buds inoculated in MS media. The cultures were incubated under conditions described previously and the rate of explant survival and sterility for each bleach concentration recorded 30 days after culturing.
Shoot induction and proliferation
Explants were inoculated on the MS medium supplemented with BAP at 0, 0.1, 0.3, 0.5, 1.0 and 1.5 mg/L. The explants were cultured under conditions described previously and data on number of shoots per explants and shoot length recorded 3 weeks after culture. After 3 weeks of culture, the induced shoots were subcultured on MS media supplemented with 0.5 mg/L BAP in combination with NAA (0.1, 0.2, 0.3, 0.4, 0.5 mg/L). The cultures were incubated under growth conditions described previously. The shoots developed in the culture jars were maintained for 4 weeks and monitored for continuous elongation. Each NAA concentration was evaluated for shoot proliferation and growth.
Rooting of shoots and acclimatization
Shoots were subcultured into MS media containing IBA at 0, 01, 0.5  and 1 mg/L and maintained for 4 weeks under growth conditions described previously. The number of roots and root length was determined for each IBA concentration. Shoots with a well-developed root system were hardened in the glass house for 7 days by growing in sterile peat moss. Hardened plants were transplanted into soil and monitored until maturity.

Sterilization of explants
Explant surface sterilization is mandatory and it serves to eliminate epiphytes and transient microorganisms. It is therefore important that the concentration of the sterilant be high enough to effectively kill all contaminants but low enough to avoid damaging the explants. To date, establishment of tissue culture for L. cornuta has not been reported. It is therefore not clear how the hollow stem sections of L. cornuta would respond to surface sterilization. To obtain the best sterilant concentration, we compared the effect of five different concentrations of NaOCl on sterility and shooting of nodal explants. The optimum concentration was 30% bleach, resulting in the highest sterility and number of shooting nodal explants (Table 1). At lower bleach concentrations the explants were greened. However, they did not shoot due to associated high rate of contamination. Bleach levels exceeding 30% caused scorching and eventual  death  of the explants (Table 1). The tissue available for isolation for microculture is an important factor that can influence the success rate of tissue culture. Vegetative tissues from plants growing outside have relatively high contamination making surface disinfection difficult. The ideal tissue is obtained from a small plant maintained in a relatively clean environment such as glass house. In this study, exposure to 30% of local bleach for 20 min was adequate to disinfect explant tissues obtained from glass house grown plants. 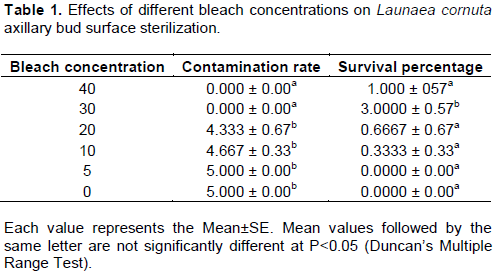 Shoot induction from axillary buds
Currently there are no reports on the in vitro response of any genotype of L. cornuta. To establish in vitro axillary shoot induction response of L. cornuta axillary buds, the effect of different BAP concentrations was compared.  Multiple shoots were best induced on low BAP (0.5 mg/L), resulting in 11 shoots per axillary bud (Figure 1) after 3 weeks. Increasing the concentration of BAP to 1.5 mg/L resulted in a substantial reduction of shoot formation to 8.6 shoots per bud. Shoot length was significantly reduced when BAP level was reduced below 0.5 mg/L. However, increasing the BAP concentration beyond 0.5 led to statistically insignificant reduction (p>0.05) in shoot length (Table 2). 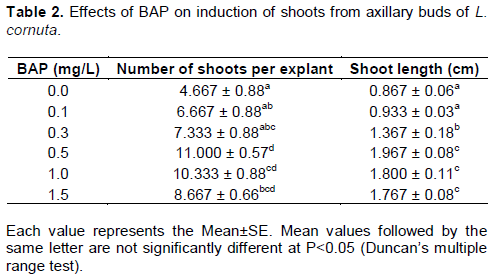 In  many   plant  species,  dormant   axillary   buds   are induced to sprout into plants using cytokinins. For L. cornuta, presence of low BAP (0.5 mg/L) is paramount for efficient shoot induction. This is because shoots were produced at a significantly higher rate (p<0.05) for all media having BAP than for the control MS basal media lacking BAP (Table 2). New growth from nodal sections of L. cornuta was apparent in about 2 weeks of culture on media having 0.5 mg/L BAP. However, the new shoots elongated in 2 to 3 weeks. Emergence of new axillary buds (shoots) is dependent not only on explant type and hormone concentration, but also on other factors including hormone type, media composition, explant age and position.
Proliferation of axillary shoots
To test the ability of induced axillary shoots to proliferate, the effect of different BAP:NAA combinations on the number of shoots and shoot growth was evaluated. Media having BAP in combination with NAA gave an excellent shoot proliferation rate (Table 3). The highest number of shoot multiplication was obtained when media was supplemented with 0.5 mg/L BAP and 0.2 mg/L NAA (Figure 1). Favorable effects of these growth regulator combinations on shoot proliferation response has also been reported for several medicinal plants, such as, Celastrus paniculatus (Martin, 2006); Coleus blumei (Rani et al., 2006) and Smilax zeylanica L. (Sayeed and Roy, 2004). The regenerated shoots were healthy and attained a height of 4.6 cm within 4 to 6 weeks on media having 0.5 mg/L BAP and 0.2 mg/L NAA (Table 3). These shoots were normal and rootable.

Root formation and plant acclimatization
After six weeks of culture of elongated shoots on hormone-free MS basal medium, the rooting response of media with different concentration of IBA was tested on excised shoots. Roots formed on shoots within 4 weeks of culture on all media with IBA (Figure 1). However, the root number and length decreased with decreasing IBA concentration. The best rooting response  with  regard  to the percentage of shoots producing roots (100%), the number of roots per shoot (7.3) and the average root length (3.3 cm) was achieved with 0.5 mg/L BAP (Table 4). Similar effects of IBA on root induction of shoots have been observed in other medicinal plants, such as Solanum trilobatum (Jawahar et al., 2004). Cassia alata (Hasan et al., 2008) and Plumbaga zeylanica (Chaplot et al., 2006). The rooted plants were hardened and transferred to soil where they grew normally with no morphological abnormalities. 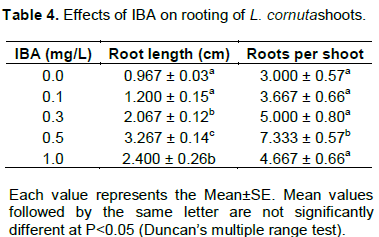 This study established for the first time a micro-propagation protocol for L. cornuta using axillary buds as explants. About 170 plants were produced from a single nodal bud after 60 days. The protocol described here can be used for rapid propagation, conservation of and exploitation of L. cornuta germplasm for their nutritional and medicinal value.

The authors  thank Rachel Njoroge for providing technical support to the project and Dr. Catherine Taracha for her assistance and encouragement. KALRO- Kabete management is appreciated for allowing the project within the center.