Cheese whey is presented as an alternative for the production of ethanol to be a major source for growth of microorganisms, which catalyze lactose directly to ethanol and other products. Thus the aims of this study were to analyze the influence of nutrients in the cheese whey (15%w/v) fermentation by Saccharomyces fragilis IZ 275, to estimate the ethanol production and verify the repetition of the results of fermentation on a laboratory and pilot scale. Based on the results the nutrients, ammonium sulphate and yeast extract showed no significant difference at 5%, however, a positive ethanol productioin of 5.07% (w/v) and 5.43% (w/v), in laboratory and pilot scale, was respectively observed. In both kinetics, the ethanol yields were 5.6% (v/v), demonstrating that the use of deproteinized cheese whey for industrial fermentations is possible due to repetition of the results from laboratory to pilot scale, presenting as a way to reduce the pollution potential of this by-product, and at the same time to obtain value-added product.

The production of dairy products, especially cheese, increases about 11.4% per year in Brazil (Wissmann et al., 2012). Cheese Whey is a by-product of cheese and casein production in the dairy industry, and represents about 85% of the total milk used in the process (Panesar and Kennedy, 2012). This by-product retains  about  55% of milk nutrients, especially lactose (4.5 to 5% w/v), soluble protein (0.6 to 0.8% w/v), such as β-lactoglobulin, α-lactalbumin, lipids (0.4 to 0.5% w/v) and mineral salts (8  to  10%  w/v, dry  weight). The  principa  minerals  are sodium chloride, potassium chloride and calcium salts (Siso, 1996; Panesar et al., 2007).
Not very many yeast strains are capable of fermenting lactose to ethanol. Most of the Saccharomyces species cannot ferment lactose to ethanol because of the lack of lactose fermenting enzymes, such beta-galactosidase (Ozmihci and Kargi, 2007). Saccharomyces fragilis is described as a homothallic, hemiascomycetous yeast and production of several enzymes among them beta-galactosidase in which it has the ability to hydrolyze the lactose in whey (Llorente et al., 2000; Dagbagli and Goksungur, 2008). The major common feature of S. fragilis is the capacity to assimilate lactose and to use this sugar as a carbon source. Lactose can be converted into bioethanol through fermentation process using yeast, especially species of S. fragilis. The long history of safe association with food products helped S. fragilis achieve GRAS (Generally Regarded As Safe) and QPS (Qualified Presumption of Safety) in the United States and European Union, respectively. This designation means that there are few restrictions on application and largely enhances their potential in the biotechnology sector (Schaffrath and Breunig, 2000; Fukuhara, 2006; Domingues et al., 2010).
Several value-added products obtained from micro-organism fermentation of cheese whey include single cell protein, ethanol, organic acids, enzymes, biopolymers, biogas and biodegradable plastics. Cheese whey has been used as an inexpensive and nutritionally rich raw material for ethanol production (Marwaha and Kennedy, 1988; Ozmihci and Kargi, 2008; Spalatelu, 2012).
Considering the optimal adaptation of the yeast S.fragilis IZ 275 in the fermentation of cheese whey, the aim of this work was to analyze the influence of the addition of nutrients sources in the fermentation of cheese whey, check the growth of the yeast and the production of ethanol and evaluating the growth and development of the yeast in laboratory and pilot scale in order to make the production of ethanol using cheese whey as nutrient source possible.

The steps employed in the treatment of cheese whey and fermentations were carried out based on the results of preliminary experiments. It was used a factorial design 33 for ethanol production optimization using concentrated deproteinized cheese whey,  which evaluated the concentration of deproteinized cheese whey, initial pH and inoculum in ethanol production by S. fragilis IZ 275 (SF IZ 275).
Pre-treatment of the cheese whey
The cheese whey powder (ConfeparÒ, Brazil) was solubilized in distilled water at a concentration of 15% (w/v). The solution was pretreated by adding lactic acid (85%) to pH 4.6 and followed by a heat treatment of 90°C for 30 min. After precipitation, the protein fraction was removed by filtration and the pH adjusted to 5.0. Thus, Deproteinized Cheese Whey – DCW was used in the experiments.
Inoculum preparation
The yeast used was SF IZ 275, maintained in test tubes containing Potato Dextrose Agar (PDA) inclined and stored at 6ºC. In preparing the inoculum was used a loop of microorganisms under sterile conditions in DCW sterilized at 121ºC for 15 min. The inoculum was incubated in an orbital shaker (Tecnal®, Brazil) at 35ºC, 100 rpm for 24 h.
Effect of nutrients in cheese whey for ethanol production
To evaluate the effect of nutrients sources on the production of ethanol by SF IZ 275, an experimental design was carried out with two replications and seven treatments (Table 1). Fermentations were conducted in 250 mL Erlenmeyer flasks with 100 ml DCW inoculated with 5% (v/v) inoculum. The flasks were incubated on an orbital shaker (Tecnal®, Brazil) at 100 rpm, 35ºC for 24 h.

Kinetics fermentation
Kinetics of fermentation to produce ethanol with SF IZ 275 were performed in laboratory scale in 250 mL Erlenmeyer flasks with 100 mL of DCW in an orbital shaker (Tecnal®, Brazil). The kinetic fermentation in laboratory scale it was repeated twice.
To assess the reproducibility on pilot scale fermentation it was performed with the same conditions in an orbital fermenter (Suck Milk®, Brazil) with 50 L of cheese whey pretreated. The kinetic fermentation in pilot scale it was repeated twice.
The media was pasteurized at 90ºC for 30 min and cooled to 35ºC. Fermentations were performed for 30 h, using as substrate 15% (w/v) deproteinized cheese whey, pH 5.0 and 5% (v/v) inoculum, at 35ºC and 100 rpm for laboratory scale, and 70 rpm for the pilot scale. Every  two  hours,  samples  were  collected  for  the determination of ethanol, glucose, residual lactose and total number of yeast cells.
Analytical determinations
The ethanol obtained from the fermentation was distilled and quantified by the method described by Kaye and Haag (1954). The residual glucose fermentations were determined by an enzymatic colorimetric method of glucose oxidase (Analisa®, Brazil). The initial and residual lactose was determined by the method described by Nickerson et al. (1975). The determination of the total number of yeast cells was performed according to the methodology described by International Dairy Federation (IDF) n. 94B (1990) and the results expressed as colony forming units per milliliter (CFU/mL).
Statistical analysis
The data were statistically analyzed by Statistica software (version 8.0) of StatSoft. The differences between treatment means were determined by Tukey test at a significance level of 5% (p <0.05).

Effect of nutrients in cheese whey for ethanol production
Ethanol production by SF IZ 275 in DCW with the addition of nutrients ranged from 2.57 to 5.82% (v/v). The maximum production of ethanol was obtained in T2 and T5 treatments with yeast extract and ammonium sulfate respectively, with no significant differences at a significance level of 5% (p <0.05) (Table 2). 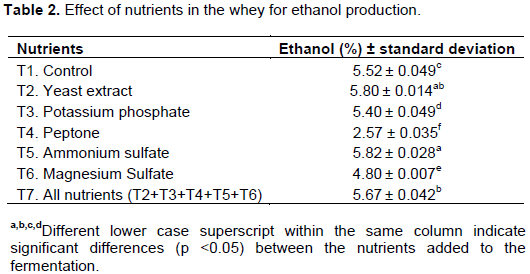 The lower ethanol production was obtained with the addition of peptone in whey, treatment T4, with only 2.57% (v/v), demonstrating not is a suitable supplement for the production of ethanol. However, Santos et al. (2013) obtained in synthetic glucose media supplemented with sucrose and 1% (w/v) peptone, favorable results for the production of ethanol.
Fermentations T2 and T5 showed a production of 5.07 and 5.43% more ethanol compared to the control, whose showed 5.52% (w/v). This demonstrates that  the  cheese whey nutrients are sufficient to ferment, and can be used as unsupplemented culture medium in fermentation and ethanol production by yeasts of the genus Saccharomyces (Santiago et al., 2004).
The nutrients of the environment are fundamental as they influence the development of yeast, affecting the speed of growth and multiplication, but the right concentration is important because it can inhibit the growth and sugar negatively influence the transformation efficiency of ethanol, when present in excess or insufficient amounts (Camili and Cabello, 2007; Silva, 2007; Sousa and Monteiro, 2011).
Kinetics fermentation
In fermentation kinetics at the laboratory scale, the production of ethanol, lactose consumption, cell growth and glucose content in the culture medium during 30 h of the fermentation were evaluated (Figure 1). 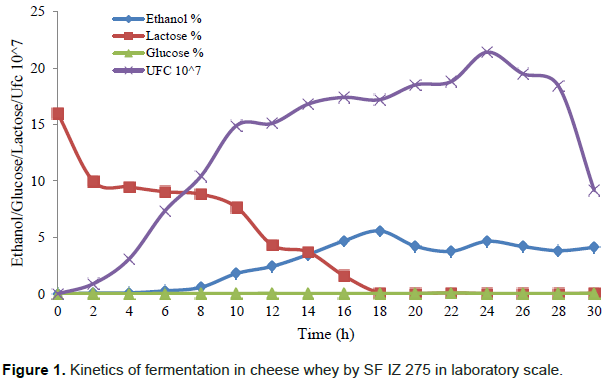 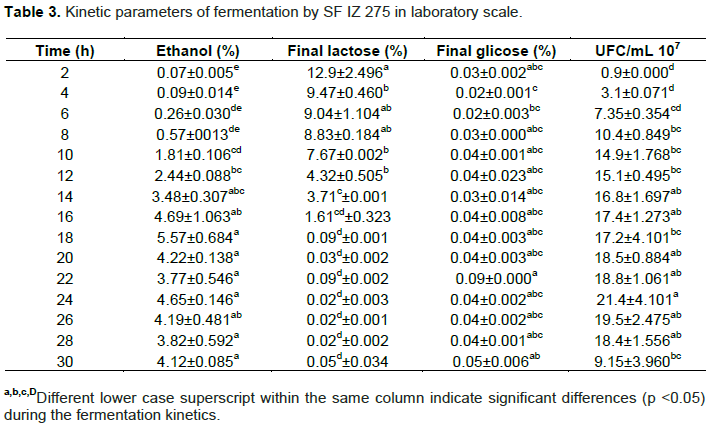 The concentration of residual glucose remained constant during fermentation from 0.02 to 0.09% (v/v), indicating that the yeast hydrolyzes the amount of lactose required for metabolism to transform it into ethanol and carbon dioxide.
In cell multiplication, yeast had a logarithmic growth up to 10 h of fermentation, when reached 1.49 × 108 CFU/mL. The growth rate between 12 and 24 h were lower, reaching 2.1 × 108 CFU/mL. From 26 h of fermentation, the yeast began to decline phase reaching the end, after 30 h of fermentation 9 × 107 CFU/mL. Cell death was probably  due  to the absence of lactose in the fermentation media, since after 18 h of fermentation, all lactose had been consumed by the yeast.
The same behavior was observed by Murari et al. (2013), which reported that in their fermentation ethanol production presents a decline as lactose will be consumed, and may yeast tolerate a concentration of 10.67% (v/v) ethanol. Thus, in most cases, reduction of cell proliferation is not only associated with higher ethanol concentration but the lack of nutrients.
In the fermentation kinetics in pilot scale, with 50 L of DCW, ethanol production is increased and linear up to 28 h of fermentation at a rate of 0.20% h-1 ethanol (R2 = 0.984) when the concentration reached 5.66% (v/v) (Figure 2). There were no significant differences at 5% (p <0.05), between 26, 28 and 30 h with 5.19, 5.66 and 5.40% (v/v) ethanol respectively (Table 3). 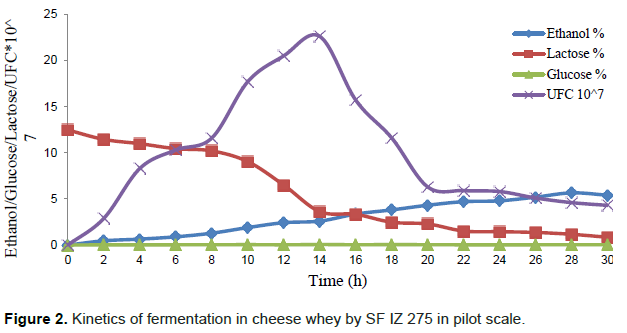 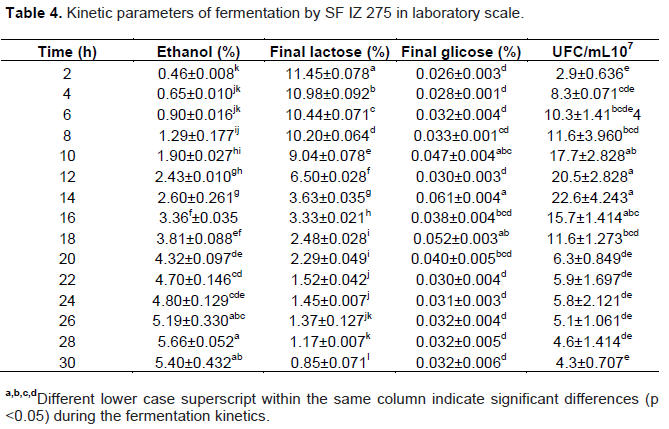 Cell growth was linear with 1.64 CFU/mL.h-1 (R2 = 0.983) to 14 h of fermentation when reached 2.2 × 108 CFU/mL. After 16 h there was a decrease in yeast count 6.3 × 107 CFU/mL in 20 h of fermentation. At 22 h fermentation was smaller  and  the  decline  after  30 h  of incubation, counting was 4.3 × 107 CFU/mL (Table 4).
The fermentation process yields a series of compounds that may act as potential inhibitors. Among them is ethanol, a metabolite produced in greater amounts, which may be toxic after a certain concentration causing reduction in cell viability in yeast, due to stress caused by exposure thereof to ethanol (Silva et al., 2008), it causes changes in the composition of the lipid layer of the membrane, acting synergistically intoxicating cell yeast, leading to death, with a reduction in cell viability (Oliva Neto, 2006).
However, tolerance to different ethanol concentrations is not yet fully understood. Thus, the catalytic process of converting lactose in ethanol can be influenced by the concentration of lactose in the fermentation broth or ethanol produced can change the metabolism of the microorganism. However, the yeast K. marxianus has been employed successfully in research, proving to be potentially viable in the process of converting lactose to ethanol (Silveira et al., 2005).
Severe conditions during fermentation, such as high alcohol content, high osmotic pressure of the substrate and strong inhibition of ethanol for the production phase, may cause the loss of cell viability with consequent cell death, and increased the fermentation period (Christensen et al., 2011; Li et al., 2009; Stanley et al., 2010).
Over 10% of ethanol may result in a decrease in efficiency in yeast fermentations, the denaturing, reducing ethanol production due to the dissolution of the cell plasma membrane, while a content of below 7% impairs the fermentation yield (Sousa and Monteiro, 2011; Silva et al., 2008; Silva et al., 2003).
Fermentation is affected by factors other than the high ethanol concentration, such as substrate inhibition and salt concentration being reduced by an increase of dead cells, shortage of nutrients, low water activity, and accumulation of polysaccharides and other macro-molecules, or undesirable loss of oxygen in the fermenter (Ezeji et al., 2004; Kumar and Gayen, 2011; Maddox, 1989).

Supplementation with yeast extract or ammonium sulfate in the fermentation of cheese whey with S. fragilis IZ 275 provided the largest ethanol production, with 5.80 and 5.82% respectively. However, due to the high availability of nutrients in the whey, supplementation with all the nutrients sources tested together have not shown up before the advantageous results compared with the control. The kinetics on laboratory and pilot scale showed similarities in ethanol production, however, the fermen-tation in a pilot scale required a longer fermentation. Thus, it can be seen that yeasts of the genus Saccharomyces are capable of fermenting deproteinized cheese whey in a pilot scale, showing possibilities of  use on an industrial scale, presenting as a way to reduce the pollution potential of this byproduct and at the same time to obtain value-added product.