Alkaline proteases need some ions to achieve highest activity. These metallic ions help in, enzyme stability and activity through its thermal stability at high degrees. This protects the enzyme from being destroyed by heat. The results show that the ideal condition for enzyme activity was, using Mn2+ ions as the activator with 1112.5 U/ml activity, while MgSO4.7H2O has  lower effectiveness of an enzyme activity 247.5 U/ml. Benzene was the best solvent (867.5 U/ml), however ethylene glycol extract had lower solvents on enzyme activity (530 U/ml). KMnO4 has the best inhibitor with enzyme activity of 1325 U/ml, while ethylenediaminetetraacetate (EDTA) has the most effective inhibitor enzyme activity with 575 U/ml. Traditional methods in leather industries are based on using H2S and other chemicals, which are considered as ways of pollution and threaten the environmental health. So, biological treatment using protease enzyme is environmentally safe and help to ease manipulation, less byproducts and wastes. Alkaline protease is used in soaking leather, incubate at 50° C for different periods then wash and hair remove by distaining processes. The enzyme control remove hair for 30 min, its activity decreased for a period of 180 min making the enzyme potentially suitable for biotechnological applications.

Protease enzyme is one of the most important commercially produced enzymes. Genus Bacillus is considered as a rich source of alkaline protease (Jisha et al., 2013). Its product represents about 35% of the products of that field (Bhunia et al., 2012). Akcan and Uyar (2011) proved that adding MgSO4.7H2O and FeSO4.7H2O support protease production by Bacillus subtilis RSKK 96. Kumar (2002) reported that Ca+2, Mg+2 and Mn+2 ions play an important role in enzyme stability, activity and thermal tolerance. Rattray et al. (1995) mention that CO+2, Mg+2, Ba+2, Zn +2 and Fe+3 ions are used for enzyme stability and to protect the enzyme against destruction after increased reaction temperature. Ca+2 ions are known as  active enzyme production through thermal stability (Kotlova et al., 2007). Hg+2, Zn+2, Cu+2, Ag+2, Fe+2, on the contrary, found to inhibit pretense activity (Pena-Montes et al., 2008). Bhunia et al. (2012), proved that some ions are important for enzyme production like Ca+2, CO+2, Cu+2, boron, Fe+2, Mn+2, mg+2 and molybdenum and the source of the enzyme detect the important ions heeded. Besides, salts as NaCl and phosphate ions are used to stimulate protease production. Growth of Bacillus sp. was found to be controlled by gradients of sodium ions, these ions interfere with balancing of pH and construction of ATP (Bhunia et al., 2012 and Lakshmi et al., 2014).
Rao et al. (2009) reported that proteinases are industrially important products used in detergents, leather and meat processing industries. The enzyme performs 35% of the microbial products of enzyme (Bhumia et al., 2012). The alkaline enzyme is important in leather industry; in soaking processes and hair removed from skin to get rid of undesired stains soda lime. Sodium sulfate were previously used due to their efficiency and environmentally friendship (Macedo et al., 2005). The enzyme was used at pH 9 to10 during soaking process to facilitate water absorption from leather , which is also used with softeners and keratin for hair removal during leather  processing in a short time (Mukherjee et al., 2008). Proteinases from B. subtilis shows an activity to hydrolyze keratin instead of sodium sulfate during hair removing (Arunachalam and Saritha, 2009), while Verma et al. (2011) used proteases from Thermoactinomyces sp. RM4 to remove goat hair.
The aim of this work was the study of the effect of some additions of activators and inhibitors on our isolate and its alkaline protease production and determination of alkaline protease efficiency in application during animal hair removal processes. 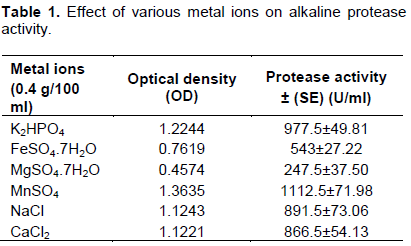 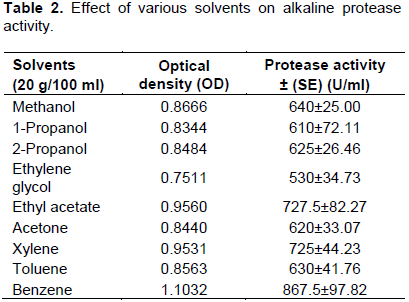 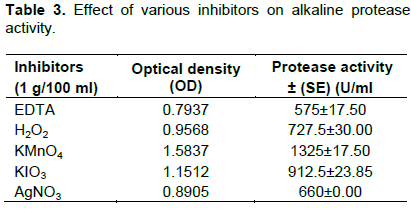 Alkaline protease produced by B. subtilis was used in this study. The protease activity of the culture filtrate was used in the ideal condition (for enzyme activity). The alkaline enzyme was active in skin hair removal process during the first 30 min up to 180 min. This activity decreased but was still functional. At the end of the treatment, the hair was completely removed leaving the skin clean (both of which can be reused) (Figures 1 to 7). 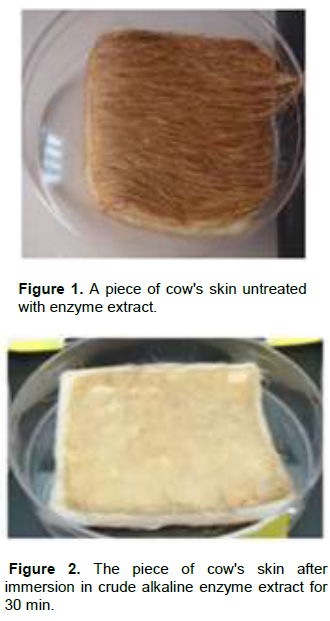 Na, Ca+2, Mn+2, Mg+2, K, Fe+3, Cu+2 and  cobalt  ions  play an important role in industrial production of alkaline enzyme which sometime catalyze the reaction between enzyme and substrate. This ions can also act as election carriers in oxidation- reduction reactions.
Results proved that magnesium ions (Mn+2) was the ideal ions which activated enzyme reaction; these findings agreed with that found by Sharaf and Al-Fadel (2013) while the result contradict those of Sharaf and Al-Fadel (2013) and Vijayaraghavan et al. (2014b) who found that calcium ions were the best. Sathyavrathan and Krithika (2014) found that Cu+2 ions was the best for this reaction. Jadhav et al. (2013) recommended potassium ions for this reaction. Muthulakshmi et al. (2011) recommended Zn+2 ions as the best conditions for the reaction, while barium ions (Ba2+) were the best as mentioned by Shahbazi and Heidari (2012).
Sandhya and Tambekar (2013) found that, adding calcium ions was the best for this reaction. Ferric ions were chosen by SaraçoÄŸlu et al.(2013), cobalt and aluminum ions were using organic solvent stimulate protease analysis of peptide bonds. New peptide bonds were formed by specificity and  stability of the enzyme in the presence of organic solvents (El-Hadj-Ali et al., 2007). Benzene was the best solvent as mentioned by (Najafi et al., 2005; Olajuyigbe and Ehiosun, 2013). Acetone was recommended by Bahobil (2011), while toluene was the best mentioned by (Padmapriya et al., 2012).
Vijayaraghavan et al. (2012c) found out that butanol was the best but n-hexadecane was found by Abusham (2009) to be the best solvent. Pathak and Deshmukh (2012) found that n-hexane was the best solvent. Vijayaraghavan et al. (2014a) recommended methanol, but dimethyl sulfoxide (DMSO) was the best solvent, as mentioned by Bhunia and Dey (2012).
Inhibitors are organic compounds or ions which stop or decrease enzyme activity. Natural structure of enzyme protein facilitate precipitation, which may block receptive sites on the enzyme structure. EDTA was found to act on metallic ions forming the structure of the enzyme. This recorded the highest percentage of inhibition of an enzyme activity, as agreed with Sharaf and Al-Fadel (2013). Bahobil (2011) found that the highest  percentage of inhibition was recorded after using cadmium chloride, while Annapurna et al. (2012) proved that maruric chloride was the highest inhibitor. Mrudula and Shyam (2012), found that H2O2 potentially inhibit the enzyme activity. AgNo3 and N-ethyl maleimide (nem) were recommended as inhibitors by Najafi et al. (2005). Others proved that Phenylmethylsulfonylfluoride (PMSF) was the best for enzyme reaction inhibition (SaraçoÄŸlu et al., 2013.)
In this study, alkaline enzyme protease was effective in removing  hair during the first 30 min and then declined a little in the effectiveness of an enzyme, with an increase in the period of incubation. The reason for this is to expose an enzyme to a temperature of 50°C which is an optimum temperature for different time periods. Factor time is important for the stability of this temperature, which has effect on the nature of protein synthesis (break some secondary links or weak) and thus loses its activity. This result is consistent with those of Bholay et al. (2012).
Shivasharana and Naik (2012) proved that, enzyme extracted from Bacillus sp. JB-99 can help in hair removing by 100% rate, and the enzyme destruct the basal cells of hair follicle and cells surrounding the hair which subsequently facilitate its removal. Also, Krishnaveni et al. (2012) indicated that, alkaline protease hydrolyze hair roots in skin layer and facilitate the removing of hair. Najafi et al. (2005) and Mukesh et al. (2012) explained that, alkaline enzyme hydrolyses collagen during incubation for 3 h and help in hair removing. Macedo et al. (2005) could completely remove skin hair by using keratinase extracted from B. subtilis S14 after 9 h incubation, but Bholay et al. (2012) proved that at 12 and 18 h, if incubated at 37°C skin hair can also be removed and this was also mentioned by Vijayaraghavan et al. (2014b). Verma et al. (2011) mentioned that, alkaline protease could remove the epidermal layer with hair by skin treatment after 24 h, while Prabhavathy et al. (2013) stated that the enzyme could remove skin hair after 24 h, as the enzyme destroy the collagen and facilitate hair remove without any skin damage. Sharaf and Al-Fadel (2013) proved that alkaline enzyme could eradicate sheep wool and also used in hair removing.