Chocolate tree (Theobroma cacao L.) is a tropical rainforest plant widely cultivated in Africa, America and Asia (Alverson et al., 1999; Whitlock et al., 2001; Acebo-Guerrero et al., 2012; Ngoh Dooh et al., 2015). In Cameroon, cocoa is one of the most economically important crops grown by small farmers for their livelihoods (Sonwa et al., 2008; ICCO, 2013, 2015). However, there is approximately 50 - 80% of cocoa production harvest losses because of an oomycete, Phytophthora megakarya, the pathogen of black pod disease in Cameroon (Djocgoue et al., 2010; Mfegue, 2012). Classically, pesticides are used to reduce the incidence of black pod disease (BPD). However, these chemicals appeared to be environmentally unfriendly, expensive, and inefficient (Sonwa et al., 2008). Hence, breeding for tolerance to BPD appeared to be the way out for sustainable cocoa culture (Iwaro et al., 2005; Ramalho et al., 2012; Bohinc and Trdan, 2012). For this, genetic improvement of cocoa through generative strategy is mostly recommended (Tahi et al., 2000; Nyassé et al., 2003; Ondobo et al., 2014; Effa et al., 2015). Generative breeding is based on the aptitude of a giving couple of parents (genotypes or clones) to generate offspring with desirable traits (Eskes and Lanaud, 1997). Obviously, many couples have not yet been assessed in this purpose, such as SNK13xUPA143, T79/501xSNK13 and UPA143xSNK64
SNK64 clone is the less susceptible to BPD, followed by SNK13, T79/501 (obtained from P7xNa32) and UPA143 clones. UPA143 and T79/501 are upper Amazonians clones, known for their high productivity but very low tolerance to P. megakarya. SNK13 and SNK64 belong to Trinitario group of cocoa. SNK13 is a moderately susceptible and productive clone while SNK64 is the most tolerant among the four clones but low yielding (Nyasse et al., 2007). Cross pollination between the above clones might generate offspring with interes-ting agronomic traits (resistance/tolerance to BPD).
Biomolecules associated to T. cacao defence against pathogens could also be useful in the development of T. cacao hybrid genotypes tolerant to BPD such as sulfur which has been used as a most important fungicide used especially for antifungal treatments of fruits (Tweedy, 1981; Hassall, 1990; Manga et al., 2016).
Nowadays, industries are producing fungicides with specific and diverse modes of action. Elemental sulfur has always been used because of the development of resistance against the compounds with unique site of action (Jolivet, 1993). Many studies have reported the involvement  of  sulfur  in  the   defense   mechanisms   of plants. However, sulfur defense mechanisms are still unclear (Saito, 2000; Cooper and Williams, 2004; Hamdan, 2010). This might involve elemental sulfur form, or organic-sulfur-containing compounds directed against microorganisms (Cooper and Williams, 2004; Hamdan, 2010; Stanislaus, 2011). In T. cacao, elemental sulfur was reported to be involved in the protection of this plant against Verticillium dahliae (Cooper et al., 1996; Cooper and Williams, 2004). Sulfur moiety in organic sulfur containing compounds in plants is mainly provided by cysteine.  Cysteine is the first organic molecule in the reduction/assimilation sequence of inorganic sulfur (SO42). Cysteine is considered as the hub of sulfur distribution in organic molecules including those involved in the defense system of plants against biotic stress (Saito, 2000). Hence, cysteine profile might be a useful biochemical marker in the selection of T. cacao hybrid genotypes tolerant to P.  megakarya.
This investigation aimed to: (a) assess the susceptibility to BPD of offspring derived from SNK13xUPA143 (KHA), T79/501xSNK13 (AHK) and UPA143♀xSNK64 (AHK3) and (b) study the profile of cysteine (variability in cysteine contents) during T. cacao / P. megakarya interaction in order to select tolerant hybrid genotypes which could be distributed to farmers.

Plant material
Leaf samples from the offspring derived from the crosses SNK13 X UPA13 (KHA), T79/501 X SNK13 (AHK) and UPA143 X SNK64 (AHK3) were used for the study. Manual pollination was conducted in the seeding farm of the Institute of Agricultural Research for Development (IRAD) at Barombi-Kang (Kumba, South-West Region, Cameroon, Africa).
T. cacao seeds from mature pods derived from ♀SNK13x♂UPA143, ♀T79/501x♂SNK13 and ♀UPA143x♂SNK64 were used to set up a nursery.  Leaves of three to four months old seedlings from SNK13xUPA143, T79/501xSNK13 and UPA143xSNK64 (of the above nursery) were used for the screening for susceptibility using leaf disc test and cysteine profile analysis.
P. megakarya strain culture
The Plant Pathology Laboratory of IRAD (Nkolbison, Yaoundé, Centre region, Cameroon, Africa) provided the strain of P. megakarya with moderate virulence. Virulence was maintained by artificial inoculation of pods followed by the re-isolation and transfer in the phenylethyl alcohol agar (PEA) medium. This was also used to induce the release of zoospores, which were used in the leaf discs test.
Zoospores productions
Zoospores (or inoculums) were obtained according to Tondje et al. (2006) method. Zoospores were produced by the inoculation of pods (with P. megakarya mycelia) followed by soaking them in sterile distilled water when sporangia recover infected pods. The solution was placed at +4°C for 5 min then immediately transferred in room temperature to allow sporangia to liberate zoospores. The zoospores concentration was adjusted to 3x105 zoospores/mL with a MALASSEZ hemati-meter.
Screening for susceptibility to P. megakarya and experimental design for leaves discs test
Two to three months old leaves were harvested (three leaves/plant) between 6 and 7 am. Using a cork cutter, 8 discs of 1.5 cm diameter were collected per leave. Hence a total of 24 discs were obtained per leave. These discs were placed bottom-side turned upward, on a wet trays and incubated for 24 h in darkness at 25 ± 1°C prior to inoculation. After the 24 h, leaf discs were inoculated by depositing 10 µL (3x105 zoospores/ml) of zoospores suspension on either side, in the middle of each leaf disc and incubated in darkness (at 25±1°C). The scoring (from 0: tolerant to 5: highly sensitive) of susceptibility (through the necrosis size) of each leaf discs (for each hybrid) was registered on 4th, 5th, 6th, 7th and 8th day after inoculation.
Artificial inoculations of leaves in the nursery
The test of undetached leaves has been used in several studies to evaluate the tolerance of plants against Phytophthora (Ahmad Kamil et al., 2004; Djocgoue et al., 2006; Nyadanu et al., 2013). In our investigations, inoculation was made on none detached leaves in the nursery. The underside of the leaf was cleaned with cotton soaked in 70° ethanol. Scarification was made at the midrib, on which, 3 mm diameter mycelia-agar-disc of 10 days old culture was placed. Then covered with sterile cotton, protected plaster and moisturized with sterile water. The incubation time was 7 days. The disease score was arbitrary defined from 0 to 5 (Figure 1).

Extraction and quantitative analysis of the soluble cysteine
The inoculated nursery leaves were harvested 6 days after inoculation (DAI), with the controls (not inoculated) lightly ground in 5 ml acetone (to remove chlorophyll) and dried for 5 min at room temperature on Wattman Nº1 paper. 0.5 g of chlorophyll-free leaves was ground in 2.5 ml of ethanol 80°. Homogenate was subsequently centrifuged for 30 min at 6000 g. The supernatant was collected for cysteine quantification.
Cysteine content was determined according to Gaitonde (1967) method. Cysteine extract (0.15 ml) was mixed with 0.35 ml of acidic ninhydrin reagent [1.3 % (w/v) ninhydrin in 1:4 concentrated HCl: CH3COOH]. The mixture was heated at 100°C for 10 min then cooled in ice bath to allow pink color development. The optical density was read at 560 nm (ε = 2.8 x 104) against the control in which the 0.15 ml of cysteine extract was replaced by equal volume of ethanol 80°. Cysteine content was expressed in µg per gram of acetonic powder (µg/gFP).
Data analysis
Data collected were subjected to descriptive statistics. Analysis of variance (ANOVA) and mean separation by the Student-Newman-Keuls were done with SPSS 17.0 software. Discrimination of hybrid genotypes according to their disease scores (level of sensitivity) were done through direct hierarchical classification of the same software.

Assessment of hybrids susceptibility to P. megakarya
The susceptibility  of  F1   hybrids   from   the   biparental crosses (SNK13xUPA143, T79/501xUPA143 and UPA143xSNK64) to P. megakarya was monitored through disease score on the fourth, sixth and seventh day after leaf discs inoculation and incubation. The sixth day appeared to be most discriminative (by generating the highest number of phenotypic subgroups of disease scores) compared to the fourth and seventh day of leaves discs inoculation and incubation.
Family UPA143xSNK64 (AHK3)
At the sixth day of leaves discs inoculation, the 44 plantlets from the subfamily ahk3ca (of AHK3) displayed disease scores between 0.0±0.0 and 4.87±0.37. The 44 plantlets were separated in 18 phenotypic subgroups of disease scores using the Student Newman and Keuls test. Direct hierarchic classification regrouped the 18 phenotypic subgroups of disease scores in 7 classes: [0.0; 1], [1; 1.5], [1.5; 2.1], [2.1; 3], [3; 4], [4; 4.5] and [4.5; 5]. Approximately, 38.64% of hybrid genotypes from ahk3ca displayed disease scores in the interval [0.00, 1.9 (Figure 2 and Table 2). 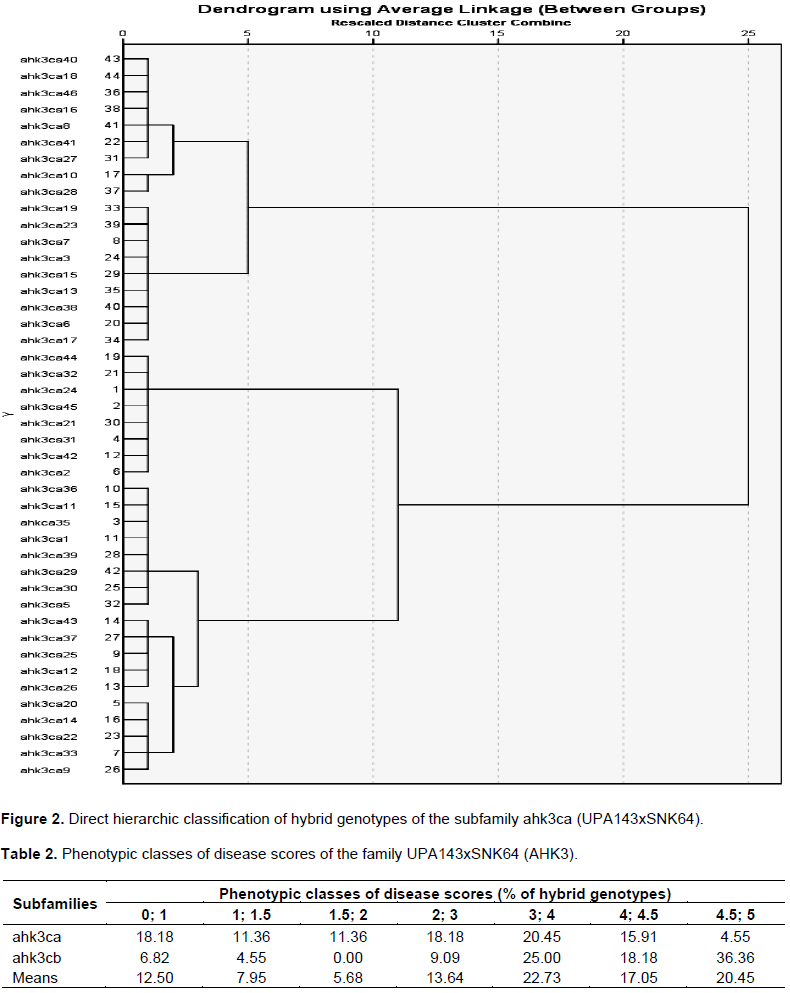 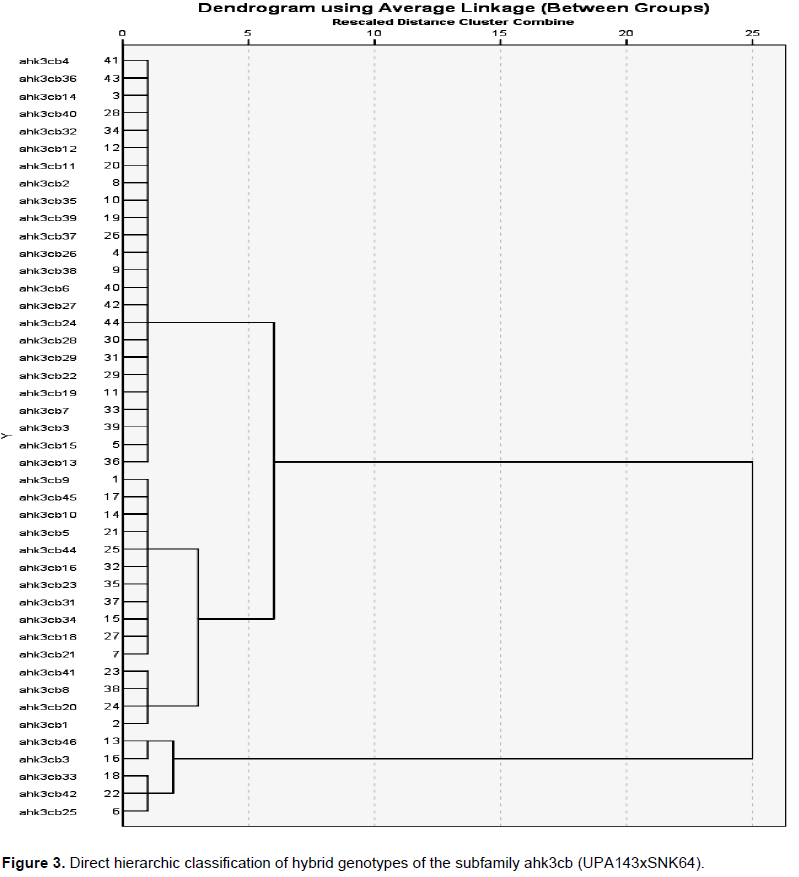 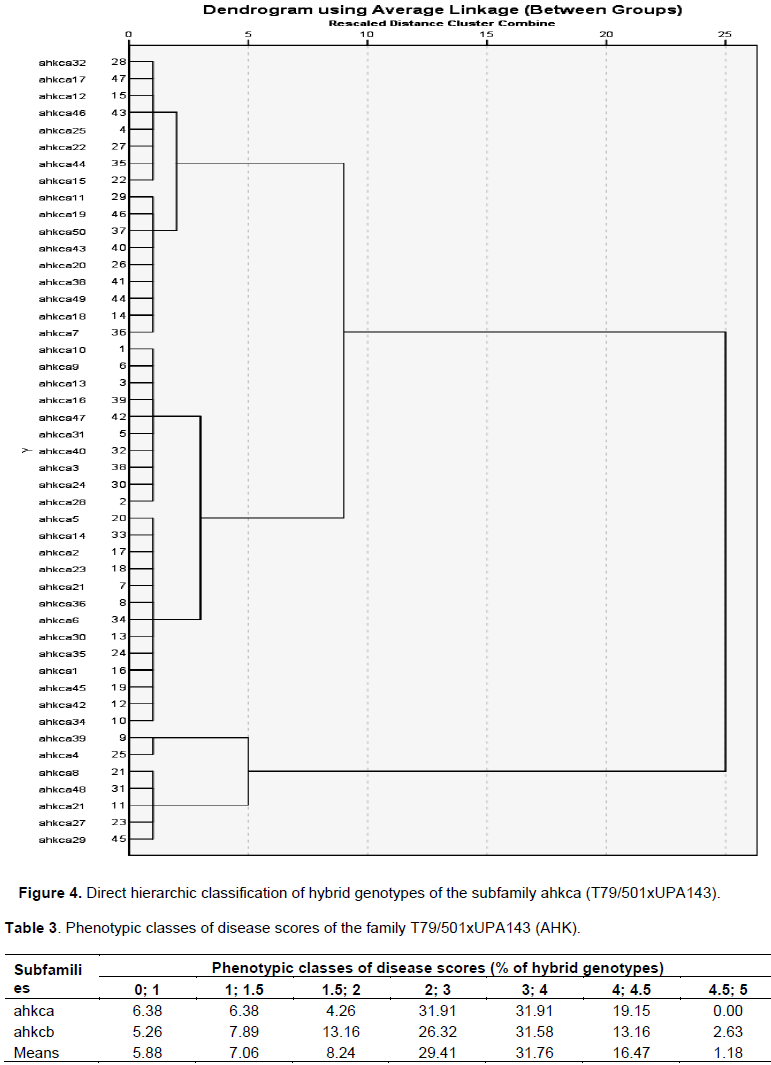 The same analysis conducted with the subfamily ahkcb made of 38 plantlets generated 14 phenotypic subgroups of disease scores. The hierarchic classification analysis grouped the 38 plantlets in 9 classes. Disease scores of this subfamily were included in the interval [0.00, 4.38]. About 17.4% of offspring showed disease score value lower than 2 (Figure 5 and Table 3). 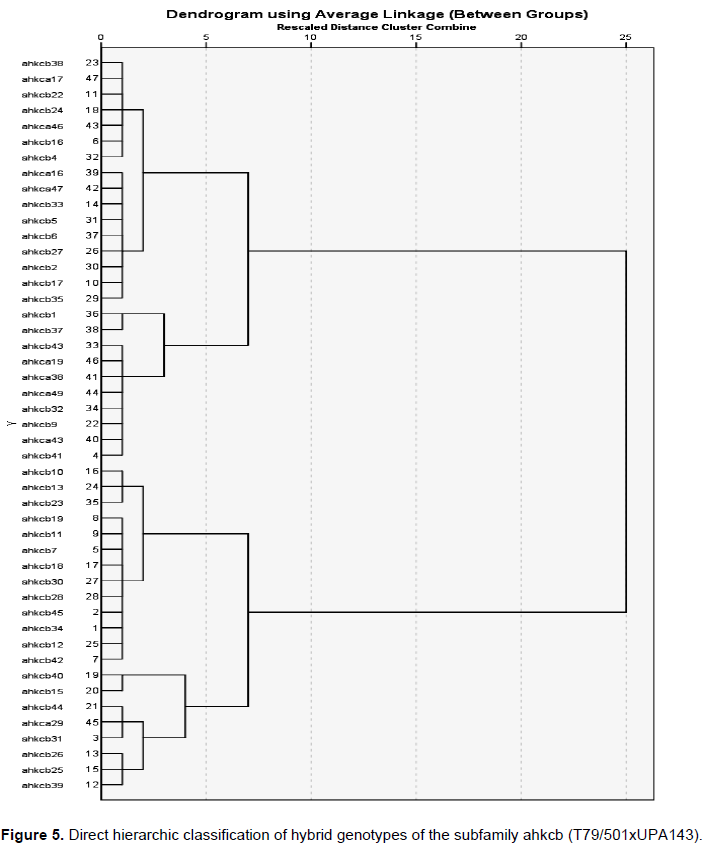 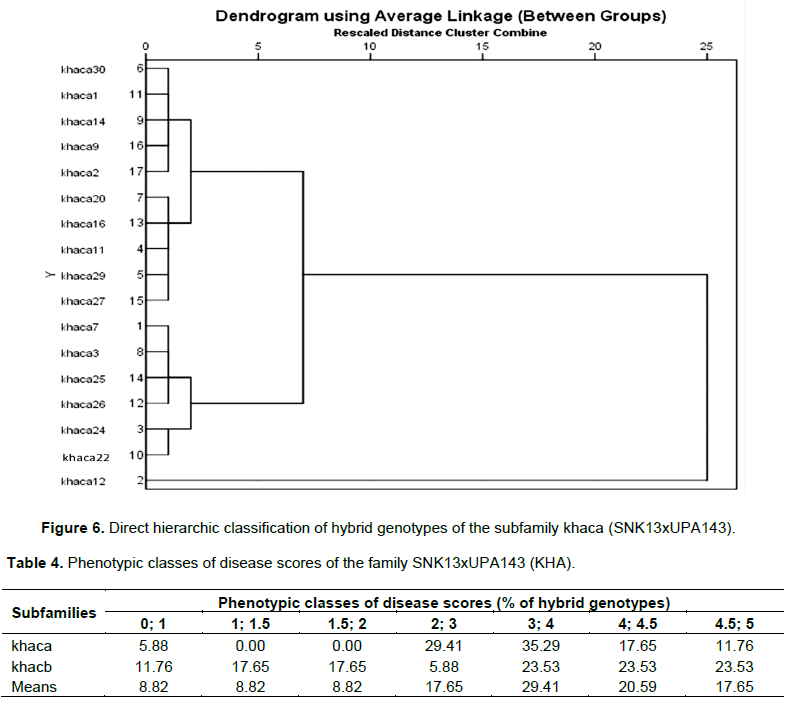 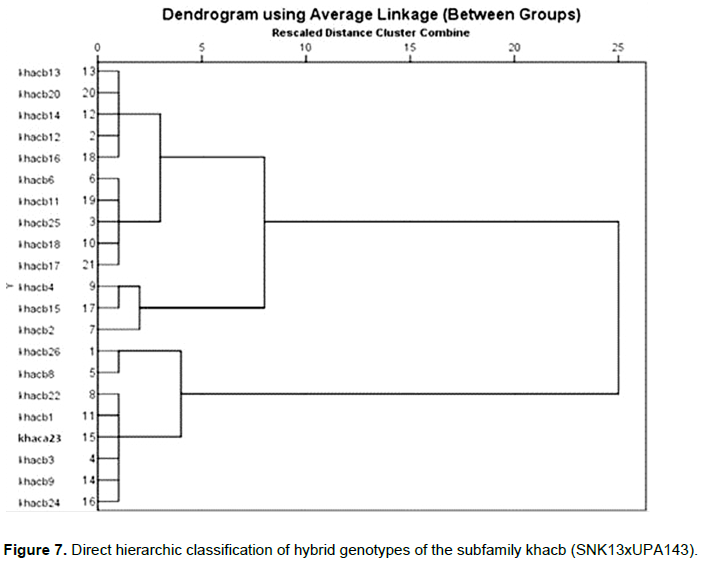 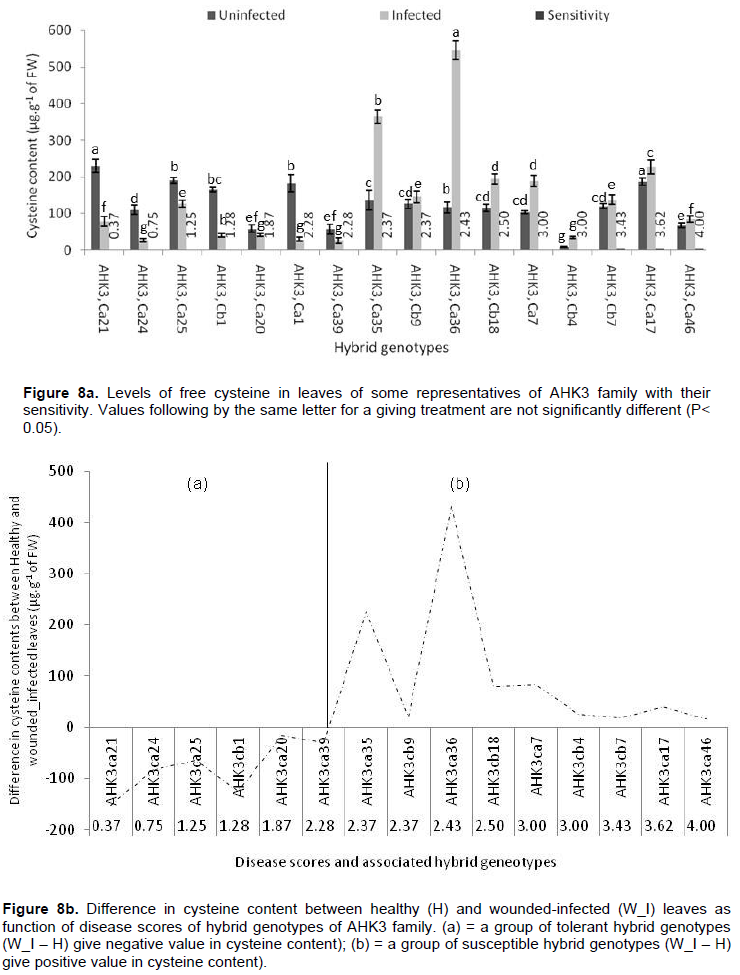 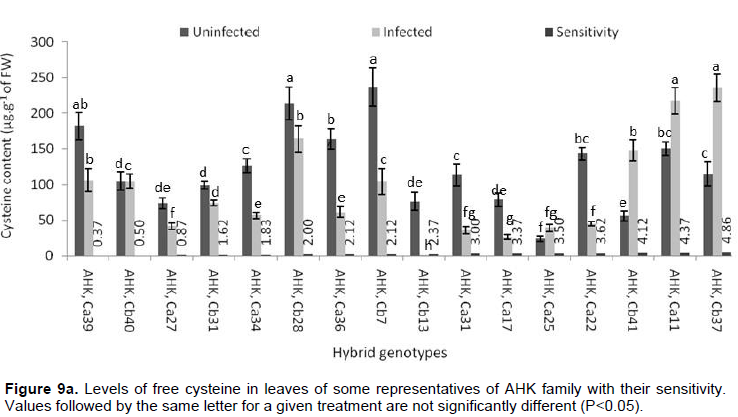 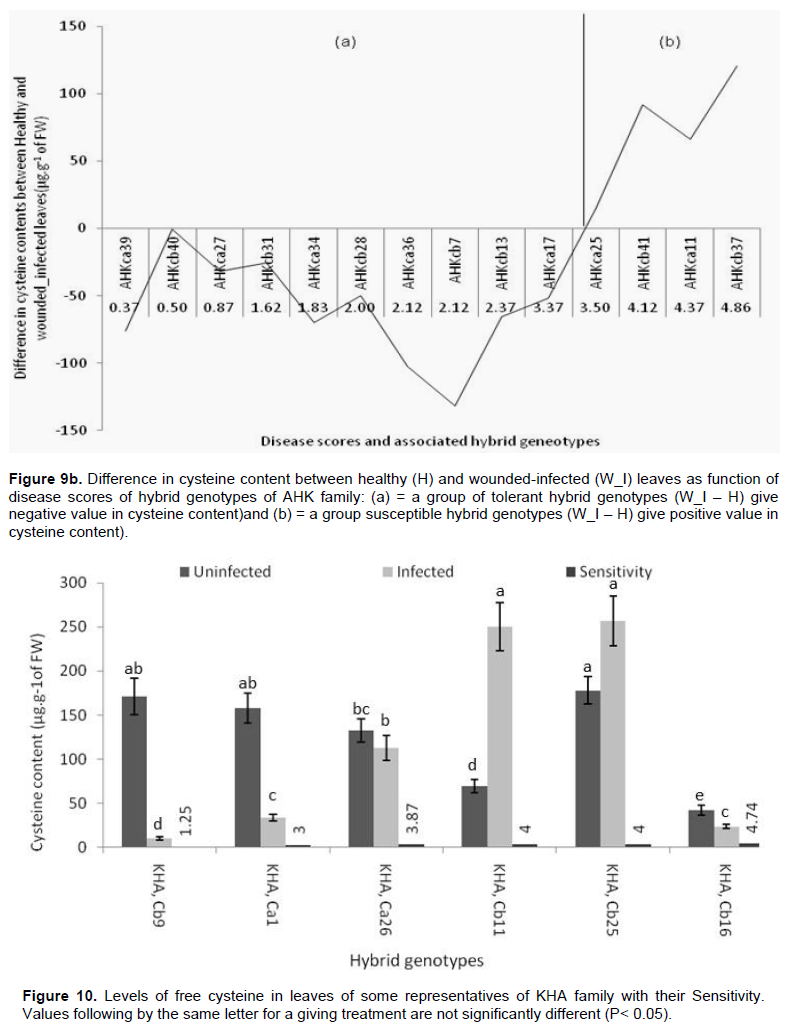 The susceptibility of hybrid genotypes of crosses SNK13xUPA143, T79/501xSNK13 and UPA143xSNK64 was evaluated and the involvement of cysteine in the defense of T. cacao against P. megakarya was analysed. The present investigation revealed that, crosses T79/501xSNK13 and UPA143xSNK64 gave the best germination rate and the highest number of seeds per pod. Similarly, both crosses generated the greatest number of tolerant hybrid genotypes. However, UPA143xSNK64 is the best of these three crosses.
The results of this study show that cysteine is mobilized during P. megakarya attack and quickly used in tolerant hybrid genotypes to fight against the pathogen. This biochemical analysis showed that cysteine pool could be used to discriminate tolerant from susceptible hybrid genotypes of T. cacao. Additionally, cysteine appeared to be  a  component  of  defense   mechanism   of   T. cacao against P. megakarya. Tolerant hybrid genotypes from this study could be used by the famers to increase yield in their plantations. Moreover, the present finding could allow researchers to use cysteine in cocoa improvement program.