The phylogenetic relationships among thirteen Rhizobium leguminosarum  bv. viciae isolates collected from various geographical regions were studied by analysis of the 23S rRNA sequences. The average of genetic distance among the studied isolates was very narrow (ranged from 0.00 to 0.04) and the studied isolates formed two main groups based on cluster analysis. The isolates were tested for their growth on YMA medium supplemented with concentrations 10, 20 and 30% of polyethylene glycol plus control. All isolates exhibited good drought-tolerant efficiencies at 10% PEG. While most of the isolates could not tolerate up to 20% PEG, isolates of Rlv6, Rlv9, Rlv12 and Rlv13 tolerated up to 20% PEG.

Rhizobia are gram-negative bacteria that can establish a symbiotic relationship with the roots of leguminous plants and form root organ called nodule, wherein bacteria is hosted and nitrogen is fixed. The classification of the bacteria belonging to the genus of Rhizobium was based on plant infection abilities for a long time (Van Berkum and Eardly, 1998). Recently, The rRNA genes are very useful for investigating the phylogenetic relationships among bacteria since their evolution are slow and their gene products performs central functions in the bacterial cell (Pulawska et al., 2000). 16S rRNA gene was the most frequently used in microbial phylogeny studies (Kolbert and Persing, 1999, Ismail et al., 2013; El-Zanaty et al., 2014). Previous studies showed that the 23S rRNA gene contains more genetic information and better diagnostic sequence stretches than the 16S rRNA gene. Moreover, the progress in sequencing tools and the decrease in their costs make the 23S rRNA powerful tool to elucidate the taxonomic relationships (Pulawska et al., 2000; reviewed in Hunt et al. (2006) and Pei et al. (2009). Wolde-meskel et al. (2005) investigated the genetic diversity among 195 rhizobial strains isolated from root nodules of 18 agroforestry species growing in diverse zones in southern Ethiopia using PCR–RFLP of the ribosomal operon (16S rRNA gene, 23S rRNA gene and the internal transcribed spacer (ITS) region between them).

The environmental stresses such as salinity, drought and heavy metals can suppress the growth and symbiotic characteristics of most rhizobia (Duzan et al., 2004; Gálvez, 2005). Drought is the main abiotic factor that affects survival and growth of soil microorganisms. Moreover, drought stress has negative effects on plant growth and metabolisms (Ehsanpour and Amini, 2003; Aydi et al., 2008; Fall et al., 2011). It was suggested that drought limits nodulation through its effects on persistence and survival of rhizobia in the soil, root-hair colonization and infection by rhizobia (Zahran, 1999; Vriezen et al., 2007; Mhadhbi et al., 2008). Therefore, isolation of rhizobia strains tolerant to stresses like drought is necessary for efficient nitrogen fixation and improving plant productivity especially in the water limited areas (Abd El-Halim et al., 2001; Abdel-Salam et al., 2002; Diouf et al., 2007). Athar and Johnson (1996) reported that nodulation, growth and nitrogen fixation in alfalfa can be improved by inoculating plants with competitive and drought tolerant rhizobia. In addition, it was demonstrated that, selecting stress-tolerant cultivars and stress-tolerant rhizobia could be a rational strategy to improve the yield of legumes in stressed environments (Ben Rhomdhane et al., 2007; Meuelenberg and Dakora, 2007; Mhadhbi et al., 2008). Therefore, the objectives of this study were to: 1) analyze the phylogenetic relationships among thirteen isolates of Rhizobium leguminosarum bv. viciae obtained from various geographical regions in Egypt by analysis of the 23S rRNA sequences;  2) characterize the isolates of R. leguminosarum symbiovar vicia faba according to their tolerance to drought. 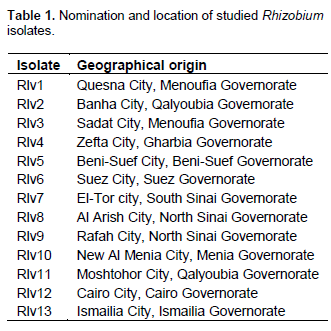 The PCR products for the thirteen isolates were used in sequencing of the 23S rRNA gene from both strands using the same primers used in PCR amplification and Big Dye Terminator v3.1 cycle sequencing kit at Bioneer (Daejeon, Korea).

The effect of drought on rhizobia-growth was examined in YMA medium supplemented with concentrations 10, 20 and 30% of polyethylene glycol (PEG 6000). One hundred microliters of suspension (1×10-8 cfu/ml) of overnight grown cultures of studied isolates were transferred to petri dishes containing YMA medium supplemented with the previous PEG concentrations. After incubation at 28°C for three days, the bacterial growth was determined by counting the number of colonies formed.

Two ways ANOVA was used to analyze the data of drought tolerance at 0.05 levels. Descriptive statistics, GLM and Duncan test at 0.05 were calculated by SAS computer program (SAS, 2004).

This work presents study on the genetic diversity of thirteen isolates of R. leguminosarum bv. Viciae collected from different Vicia faba fields and representing several governorates in Egypt (Table 1). Since, the structure of ribosomes is largely conserved among the three kingdoms of life organisms and the horizontal gene transfer events are unlikely to occur in the highly constrained rRNA genes, these advantages make the phylogenetic analysis and taxonomic classification of cellular organisms based on rRNA genes very ideal (Pei et al., 2009). The 23S rRNA partial gene was amplified using 23S rRNA primers which were designed on NCBI site. All of isolates yielded a single-fragment about 700 bp as indicated in Figure 1. After amplification, the same primers were used for partial sequencing of 23S rRNA gene. The alignment was done for all isolates sequences with the reference 23S rRNA gene of R. leguminosarum (AF207785.1) published in NCBI (http://www.ncbi.nlm.nih.gov/). The genetic diversity was estimated based on the number of base pairs substitution per site among all isolates using mega program version 6 (Tamura et al., 2013) as shown in Table 2. The phylogenetic relationship analysis using UPGMA method, divided the isolates into two principal groups (Figure 2); the first group included the isolates Rlv6, Rlv8 and Rlv9, while the second group contained isolates of Rlv1, Rlv2, Rlv3, Rlv4, Rlv5, Rlv7, Rlv10, Rlv11, Rlv12 and Rlv13. Although, the tested isolates were collected from different geographic zones in Egypt, the values of genetic distances among these isolates were very low and ranged from 0.00 to 0.04 (Table 2). This may be due to the high conserved nature of the 23S rRNA gene sequences (Pei et al., 2009), so the sequences variability is limited and, second, it is possible that these isolates have originated from the same genetic background and the human activities like soil and plant transfer limited the genetic diversity of these isolates (Ismail et al., 2013). 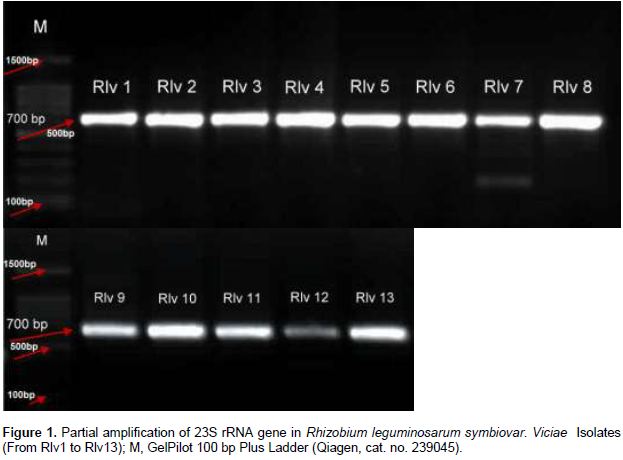 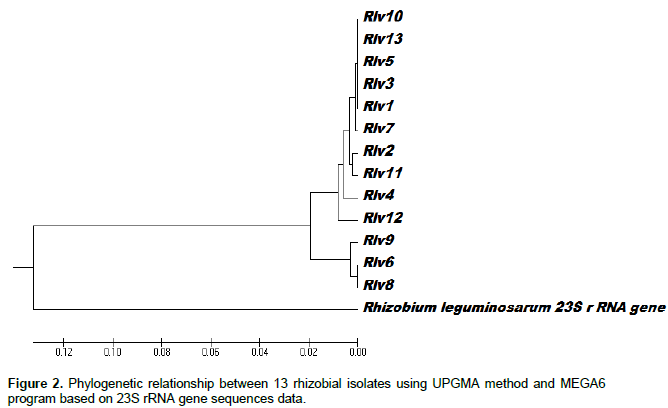 The rhizobial isolates were tested for their drought tolerance in YMA medium supplemented with increasing concentrations of PEG 6000 (10, 20 and 30%) and evaluated as tolerant and sensitive based on the number of colonies formed. In general, all isolates showed good drought-tolerant efficiencies at 10% PEG, while most of them could not tolerate up to 20% PEG (Table 3). These results are in agreement with a previous study which showed that most rhizobial strains, which nodulate important crops, are very sensitive to drought and abiotic factors such as high salt, pH, and temperature (Rehman and Nautiyal, 2002). The results showed that nine isolates (Rlv1, Rlv2, Rlv3, Rlv4, Rlv5, Rlv7, Rlv8, Rlv10 and Rlv11) could not tolerate 20% PEG concentration and were considered as sensitive to drought stress. In contrast, the isolates Rlv6 of Suez, Rlv9 of Rafah, Rlv12 of Cairo and Rlv13 of Ismailia succeeded to grow on 20% of PEG and are considered as tolerant. It was shown that the isolate RLV13 of Ismailia gave the best growth in presence of PEG then the isolates; Rlv6 of  Suez, Rlv9 of Rafah, Rlv12 of Cairo respectively Table 3. The failure of rhizobia isolates to grow at the highest doses of PEG is due to PEG reduces water availability by binding water molecules without penetrating the cell wall (Rehman and Nautiyal, 2002; Rasanen et al., 2004; Cytryn et al., 2007; Abdel-Salam et al., 2010). Moreover, the osmotic stress can affect negatively on Rhizobia by changing their morphology, survival in soil, root-hair colonization, infection and dehydration of cells (Niste et al., 2013). On the other hand, the success of isolates Rlv6, Rlv9, Rlv12 and Rlv13 to grow on 20% of PEG may be due to acquiring some mechanisms or pathways for drought tolerance through their growth in water limited soils. These results are supported with previous review suggesting that Rhizobia having some key tolerance mechanism/pathways against certain abiotic stresses (Gopalakrishnan et al., 2015) and with other observations illustrated the roles of rhizobia in adaptation of crops to various abiotic stresses (Yang et al., 2009; reviewed by Grover et al., 2010). 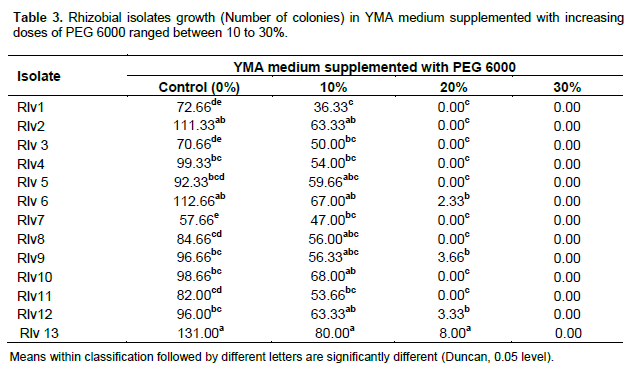