Millet crop is an important cereal for food security and the fight against poverty and malnutrition in the arid Sahel. It is a staple grain for millions of people in West Africa and India. It has the advantage of tolerating drought-prone environments and low fertility soils. Recent climate change exacerbates the phenomenon of drought; hence, improving pearl millet drought tolerance became a present necessity. The present study was conducted to determine an in vitro screening method for drought tolerance, based on the use of polyethylene glycol (PEG) of molecular weight 6000 Da. This experiment was carried out with one millet genotype (HKP), promoted by the agricultural official services. The effect of PEG6000, with varying concentrations from 0 to 40% (w/v), on germination percentage, coleoptiles emergence, shoot and root length, shoot and root weight and root/shoot ratio were analyzed. Data were used to determine the lethal dose for 50% growth inhibition (LD50), which was applied for drought tolerance screening. Significant differences were observed for all the characters under different PEG concentrations. LD50 was 262 g/L for the germination percentage and 242 g/L for coleoptiles emergence.

Of all domesticated cereals, pearl millet is the most drought tolerant plant (Squire et al., 1987; CGIAR, 2006), with high quality grain. It is the main crop cultivated in the difficult agronomic conditions of the semi-arid tropics of Africa and Asia and contribute to the diet of millions of people (Andrews and Bramel-Cox, 1994; Kumar, 1989). The productivity in this arid zone is very low, due to the low and erratic rainfall. Given the rapid increase in population in this zone, there is a need for breeding drought tolerant varieties.

Uncertainty of rainfall is critical especially at the beginning of the cycle, after crop emergence. The challenge is to obtain seed that have a high production capacity, in a short period of time after germination and that develop adequate root biomass to colonize deeper soil layers. Drought constitutes one of the most important environmental stress factors limiting plant growth (Sivakumar, 1992). Large areas of drylands are threatened unproductive due to human activities and recent unfavorable climate change. In order to cultivate plants in such countries, attempts have been made (Saidou, 2011) to develop water stress tolerant lines.

Millet is one of the best stress tolerant plants in the world (ICRISAT, 1987). It is the staple crop of 30 million populations in the dry region of the Sahel and in India. Due to climate change, increasing drought is responsible of significant fraction of yield loss. Breeding and production of improved varieties well adapted to new heavy water stress are urgent requirement. Polyethylene glycol (PEG) of high molecular weight has long been used to simulate water stress in plant growth as described by previous works (Kaufmann and Eckard, 1978; Tazi et al., 2003; Zgallaï et al., 2007; Kouakou et al., 2008; Fan et al., 2012). The aim of this work is to measure the effect of PEG on germination and seedling growth of pearl millet, to determine the LD50 to be used for screening for drought tolerance.

The experimental material used was pearl millet, genotype HKP, a cultivar promoted by the National Agronomic Research Institute, for its different interesting traits (Relatively early cycle, good performance, medium tillering, medium cob and large seed). Seeds (mature embryos) were obtained from the Biotechnology and Crop Improvement Laboratory of the National Radio Isotopes Institute of the University of Niamey. The experiment was conducted during April to May 2011, in the Plant Biotechnology laboratory of ULB University of Brussels. Water stress was applied using seven concentrations of PEG6000, corresponding to -1.0; -3.7; -8.0; -9.8; -11.3; -13.0 and - 14.7 bars of water potential. These water potential were obtained by adding in 1000 ml of deionized pure water, respectively: 100; 200; 300; 325; 350; 375 and 400 g of PEG6000, following the method of Lawlor (1970) and Michel (1983).

Seeds were surface sterilized by soaking them first in 70% alcohol for 30 s, and then in 5% calcium hypochlorite for 10 min. Seeds were finally rinsed five times with pure sterile water. Sterilized seeds were germinated in Petri dishes (90 mm diameter) on filter paper soaked with 2 ml of the different concentrations of PEG6000, with 10 seeds per Petri dish. To reduce moist evaporation, the Petri dishes were sealed with sterilized Parafilm. Each Petri dish is a repetition and there are 10 replicates per dose of PEG. The incubation took place for one week, continuously in darkness, at approximately 37°C, to simulate the natural conditions of pearl millet seeds germination, even though it was reported that germination percentage is optimal at 25 to 30°C for P. glaucum (Mortmock and Vanderlip, 1989). Polyethylene glycol of high molecular weight is inert, non-ionic. They are small enough to influence the osmotic potential, but large enough to not be absorbed by plant. They could lower the osmotic potential of the nutrient solution without been taken up or been phytotoxic (Lawlor, 1970).

Germination percentage was recorded at the third day of incubation. Root and coleoptiles length as well as their respective weights were evaluated after seven days of culture. A seed is recorded as germinated when the root is visible and at least 1 mm in length.

The experiment layout was a randomized complete design with one factor; PEG6000 concentration, with 10 replications. Data were analyzed with one factor analysis of variance (ANOVA), with Excel (2007) and means were separated with Newman and Kheuls test at 5%. 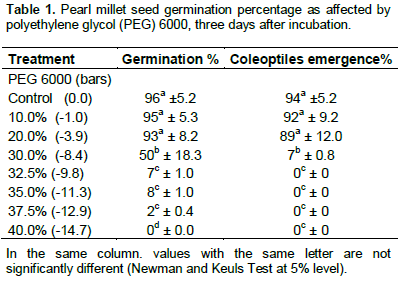 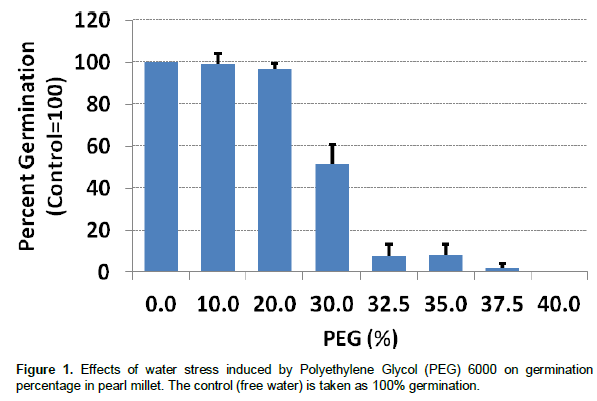 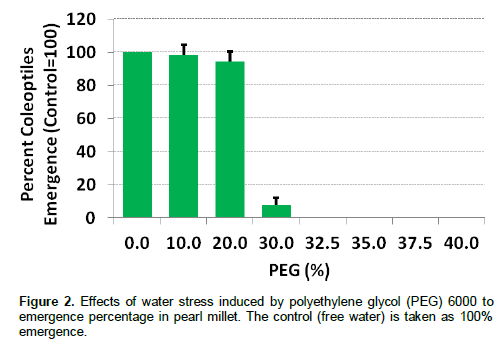 There was no shoot and root emission above 20% PEG and analysis of seedling shoot growth was restricted to the two doses 10 and 20% compared to control (Table 2). Shoot length was significantly lower with an increase in PEG concentration. Shoot length showed reduced values from 7.66 cm for the control to 3.24 cm for the highest concentration (20%).

Y is the relative growth in percent 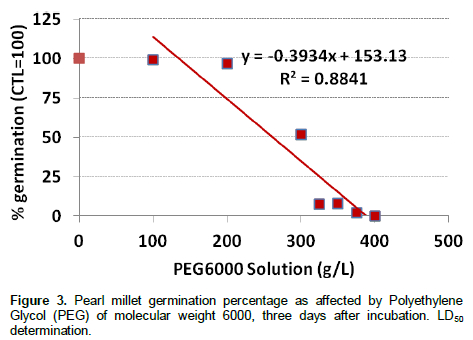 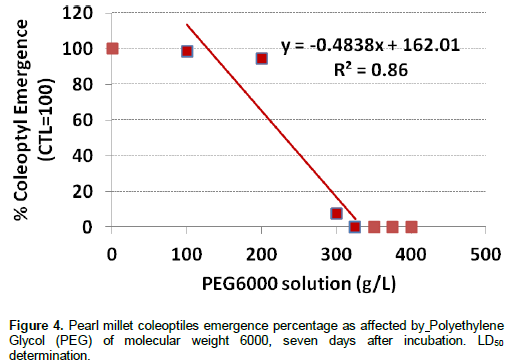 Using the above formula, the LD50 is the X value calculated for Y equal to 50. The values obtained were: 262 g/L for germination percentage and 242 g/L for coleoptiles emergence. These values indicated the concentrations of PEG6000 that would induce a reduction of 50% in germination and emergence of coleoptiles. The principle of screening is to identify lines or varieties with germination and emergence percentages above 50% with the LD50. In this study, the results allowed us to screen for drought tolerant mutants of pearl millet obtained by gamma irradiation mutation induction techniques.

Low PEG dosages (0; 10 and 20%) did not have any significant effect on the germination percentage of pearl millet seeds, while higher dosages (30 to 40%) negatively affected germination. This result was in agreement with several previous reports (Van Der Weerd, et al., 2002; Radouane, 2007; Farsiani and Ghobadi, 2009; Govindaraj et al., 2010). At 30% PEG, the germination rate was reduced to 50% compared to the control. It was below10% with PEG concentrations above 30%. At a high PEG dosage (40%), there was no germination. Water hydraulic conductivity is too low and germination process was strongly reduced. The upper limit of the physiological activities (pF 4.2) is perhaps reached. However, working on Tunisian ecotypes of pearl millet, Radhouane (2007) reported more than 50% germination with a high concentration of PEG (equivalent of -2 MPa=-20 bars).

As described by previous authors (Peske et al., 2010), pearl millet seeds emit primary roots at 33% water contents and the PEG effect is delaying the imbibitions process. For the potential of -12 bars and below, the seeds did not absorb more than 28% water, and thus, did not emit primary roots. Our observations are consistent with these results.

In the case of drought conditions, the most powerful root system is one that will increase its volume to allow a better exploitation of deep water reserves (Ousmane, 1996). Thus, root length and weight are important determinants for the choice of cultivar for dryland conditions. In this study, the root length was significantly increased at 10% PEG concentration (-1 bar) compared to the control, but was significantly lower when the concentration increased to 20%. The low concentration of PEG induced a rhizo-stimulation as described by several authors on different growth parameters (Badr et al., 1997; Radouane, 2007; Majeed et al., 2010; Horn et al. 2010; Sumira et al., 2011). This result suggested that a moderate concentration of PEG6000 can be used as root growth regulator in in vitro tissue culture.

The effect of low doses of PEG observed for root length was not the same for shoot growth. In this study, the extension of the root system has not a positive effect on the growth of shoot. But in soil conditions, root system could extend to deeper and wetter zones and therefore better support plant growth (Ousmane et al., 1993). This is not evident in vitro culture where water and nutrients are homogeneous throughout the Petri dish.

The root/shoot ratio showed comparable root and shoots growth in normal conditions and in water stress situation. This study revealed a significant increase in the root/shoot ratio with increasing PEG concentration. Root growth was maintained against osmotic potential increment. This indicated that the physiological activity of the root system is less sensitive to low relative water content; but sap transfer to leaves require higher water potentials.

While confirming previous results on the reactions of a plant against water stress, this study showed that PEG of molecular weight 6000 can be used as an in vitro simulator of water stress for pearl millet. It was particularly shown that the growth rate of pearl millet root could be maintained at relatively low water potentials (-39 bars), while the sap transfer to plant shoot is strongly inhibited. However, this needs further investigation in order to determine if there is any genotypic effect at this level. In addition, the LD50 values established for germination percentage and coleoptiles emergence will be used for screening for drought tolerance in pearl millet mutants obtained by induced mutation techniques in a future study.